Creative edu, especially the song choice. Bob the Builder is a quality show too

Nic
9 years
Damnit. Now that song is going to be stuck in my head all day. Cheers

Really like this story mate. Leading the club to glory.
Login to Quote

Akash
9 years
Thank you very much for the chants and the comments, guys. The next update will be posted soon, with the Playoff results. Get ready to be amazed!

Before dreaming of the final, we would first have to get through the QFs against Verviers, who finished in the Playoff spot in the Third Division B. 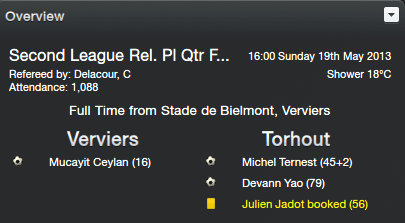 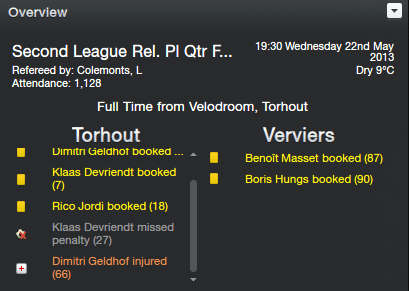 So we did, with a boring 0-0 draw and a missed penalty. No complaints, as long as the job got down. We're playing Oudenaarde next, a team who are significantly better than us. This isn't the league though, and anything can happen over the two legs.
Login to Quote

edu1878
9 years
I would like to take credit for the win after the creation of m genius chant for the fans (jks). But seriously, great victory with a unfavoured team. Now go and win those playoffs.
Login to Quote

I'll need all the luck in the world, thank you for the comment


I've heard the Torhout newspapers have started using that chant as a headline everytime we win. You might want to sue them!
Login to Quote


Oudenaarde and us went head to head in the Third Period of the season, with us having to score more points than Oudenaarde to get into the Playoffs. Now that Torhout had won that race, Oudenaarde would stand between us and the Playoff Final. 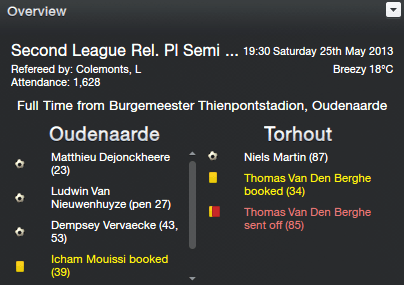 With us losing the first leg 4-1, it didn't look promising. The players lost hope and so did the fans, but after some morale building, we were ready. 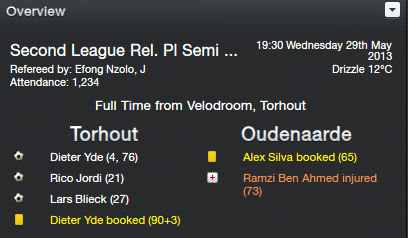 YES! We have qualified for the Playoff Final. We overcame the odds, scoring 3 of the 4 goals needed within the first 27 minutes. Oudenaarde did not have any time to react. More history was to follow, with Dessel, the team from the Second Division who threw us out of the Belgian Cup will face us in the final.
Login to Quote

Walter
9 years
Ooooooooooooooh! What a win! Congratulations good luck in the playoff final, this is just when I live FM


A two-legged final might not have the same fun-fair as a one-off final at a neutral venue does, but tell that to Torhout fans hoping to see their side climb up a division, and to Dessel fans, who are hoping their team stays on in their own division. The absence of our top striker, Yde, would just add to our woes. 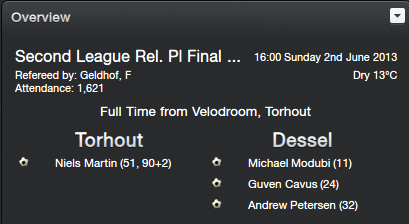 32 minutes in, and I thought it was all over. We were 3-0 down against a team that looked better drilled, with better finishing and just fitter. Was this the difference between a Third Division and a Second division side? Looked like a wide gap. Niels Martins, who is still only coming back from a 6-7 month injury scores a brace to make the second leg more than a formality, which was in 3 days. 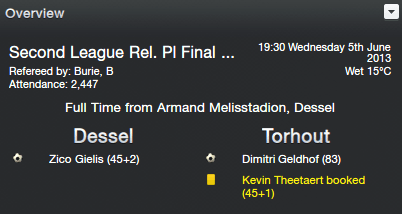 It was supposed to be the stuff dreams are made of. We needed two goals more than Dessel, but we ended up drawing 1-1. We would be staying in the Third Division for another year. 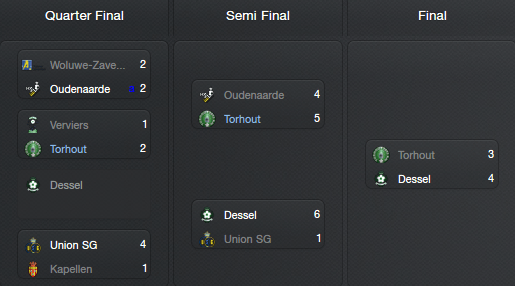 Walter
9 years
Bad luck mate, maybe next season you can come back as the favourite


Let's start with the positives. Our last season delighted the fans and board, and everyone associated with Torhout 1992 KM. 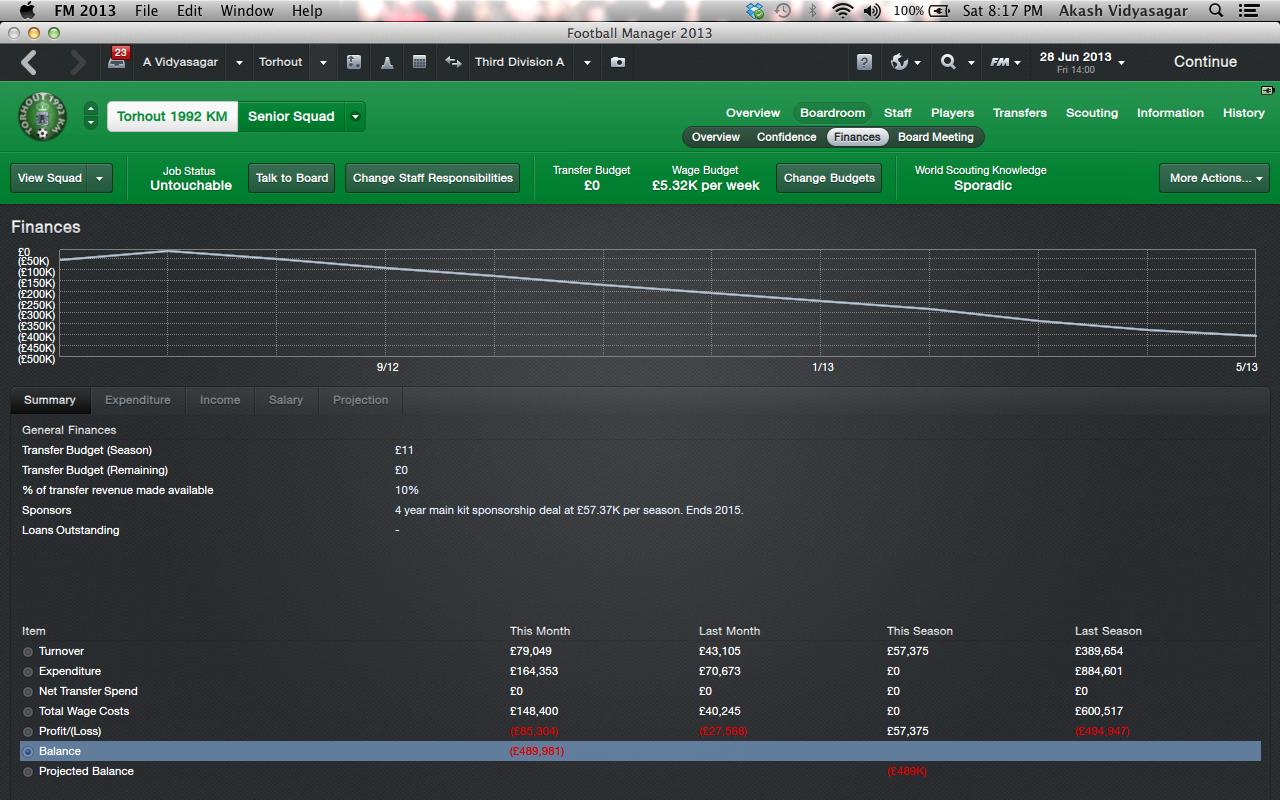 We have no money. In fact, we are losing around £50k every month, even though I have reduced the wage bill considerably, and even gotten rid of the deadwood in the staff room. The cost of running the club is too high for our club owners to handle, I suppose, and they have declared the club finances to be 'insecure'. Insecure is a nice way of saying "We're going bankrupt". I've had a heated meeting with the owners about cleverly hiding this fact until I signed the contract. I could still resign and leave, but they knew that a year of management experience meant nothing. They gave me a chance at becoming a manager without any credentials. Also, all my loans were going back to their original clubs, which means we have no first team players and no money to buy new ones. The new season will certain have its own challenges, but a year in the game has given me the experience to deal with these challenges head-on. Of course, there's one thing we're yet to find out - fans' expectations. Fans don't know everything that is happening behind the scenes so they only know of our exploits last season, and will expect the same or better in this one. Well, they shouldn't though, because with the resources - or the lack of - we have, we should be happy just to avoid relegation.

The provisional transfer and wage budgets are in, and my suspicions held true. We haven't even signed anyone yet and we're £1.05k in the red. We'll have to sell all our top earners to stay afloat, and my job to tell them they need to pack their bags.
Login to Quote

Akash
9 years
I walked into my office, after a couple of weeks of vacation, trying to find ways to improve our financial condition. Before I could come up with my own plan, the board had found a way they thought would help - slashing my wage budget.

With us being £1.05k above budget and the board expecting a top-half finish minimum, I would have to sell our best players. Another simple way of helping our finances would be to invite the bigger teams to come to the Velodroome, filling up the stadium. So, I started making calls and soon enough, all the Pro League teams were lining up to play against our team.

Now that I knew the teams were coming, I realized another problem. With the loaned players from last season gone, if no players were brought in, we wouldn't be able to field even a decent side. Time to look for some bargains in the market.
Login to Quote

Starting On The Right Note

All my top earners, gone - just like that. Some of them were released out of their contracts while others' contracts were not renewed and were forced to leave. The thing is, these are the players that were the backbone of our successful campaign last time out. Without them, things will be extremely difficult for us in both competitions. Our affiliation with Genk came in handy here, as I was able to raid them of some of their best young players. You'll get to meet them as and when the season starts. The signing I was most excited about in the middle of last season, Niels Peers, also had to be released since we couldn't afford his wage demands.

Any help we receive in the financial department is appreciated. So, I would like to thank those 5 extra fans that bought a season ticket this season. Hope you see some attractive football over the next year.
Login to Quote