Jer
9 years
All I see is wins no matter what!
Login to Quote

Dear fans,
It is an exciting time for us in Torhout, as we officially unveiled our affiliation with Belgian Pro League side, Genk. Starting immediately, the top side will be heavily involved in youth development at our club and any future temporary exchange of talent will be done free of cost.

All the excitement is not only off the pitch, with our first team hitting a purple patch - adding positive results along with performance - winning 4 out of the 6 matches played in the month.

I won't be answering any mails personally, but lot of regular readers, like Glenn Tham, Jeremy Pauker and Arvind Krishna, have voiced their concern over our league position. We are expected to be higher than we are right now, but the board and the players know that our league position doesn't reflect how strong a place we are in right now. Even though we're in 12th position, we're only 6 points away from 4th place. All we need is to go on a good run this month, and hopefully, the angry fan-mail will reduce. 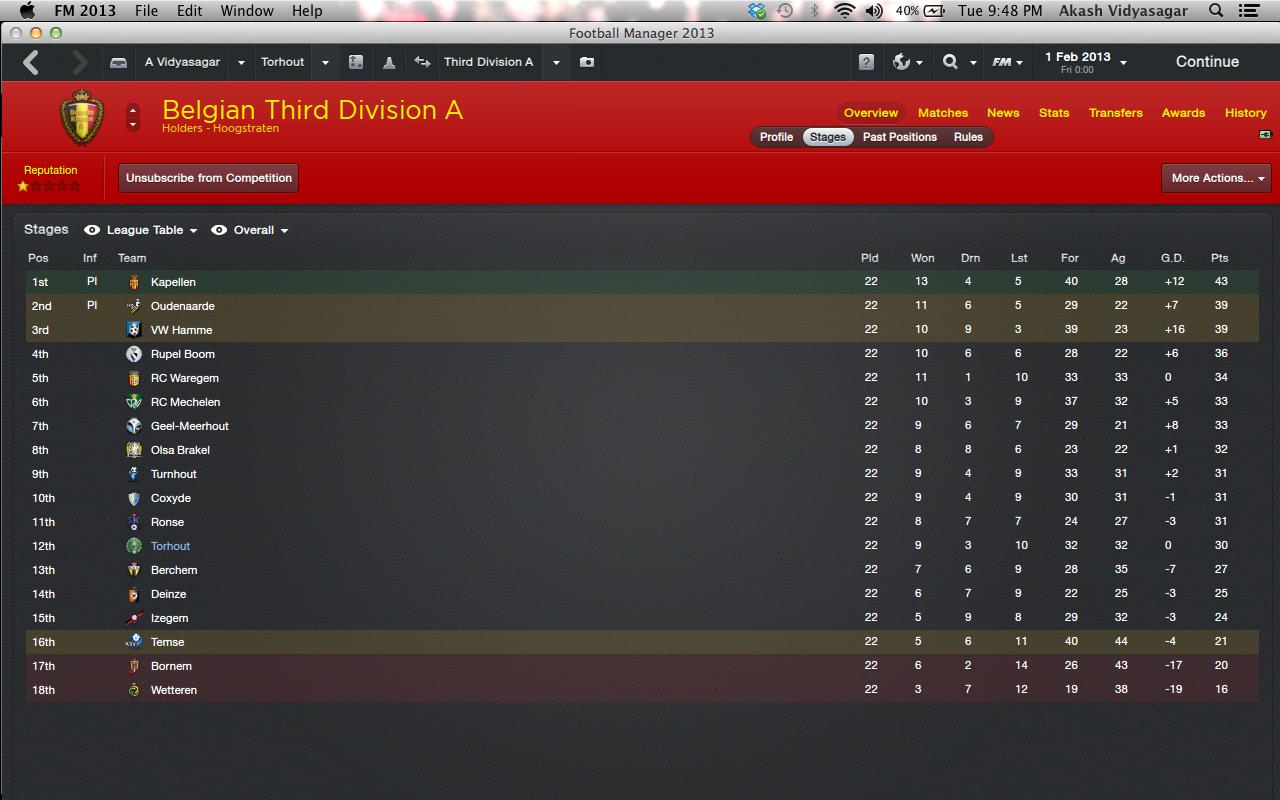 STFCDan
9 years
The results looked so promising, but the 4-1 lose sticks out like a sore thumb. Still getting linked with Genk is a good move!
Login to Quote

Joe
9 years
A link with Genk is brilliant, they always produce great youngsters
Login to Quote

Hello, Torhout fans.
I, as many of you know, have been really busy getting the boys ready for the last period of the season. When I came into Belgium, the 'period' system took a little bit of explaining. In most leagues, the eventual winners were the ones who went through, but I quite like this idea. Not only have been consolidated our position in the month of February, but are in contention for a playoff spot if Oudenaarde slip up, and if we continue this run of form.

The boys have loved the support they have received from the stands, and it has been a delight to be in the centre of that Velodroome, hearing you lot sign our praises. Each and every player in the locker room lives for such occasions. If you have been following my column, you know what I said last month. A few good wins and we'll reach the top half of the table. 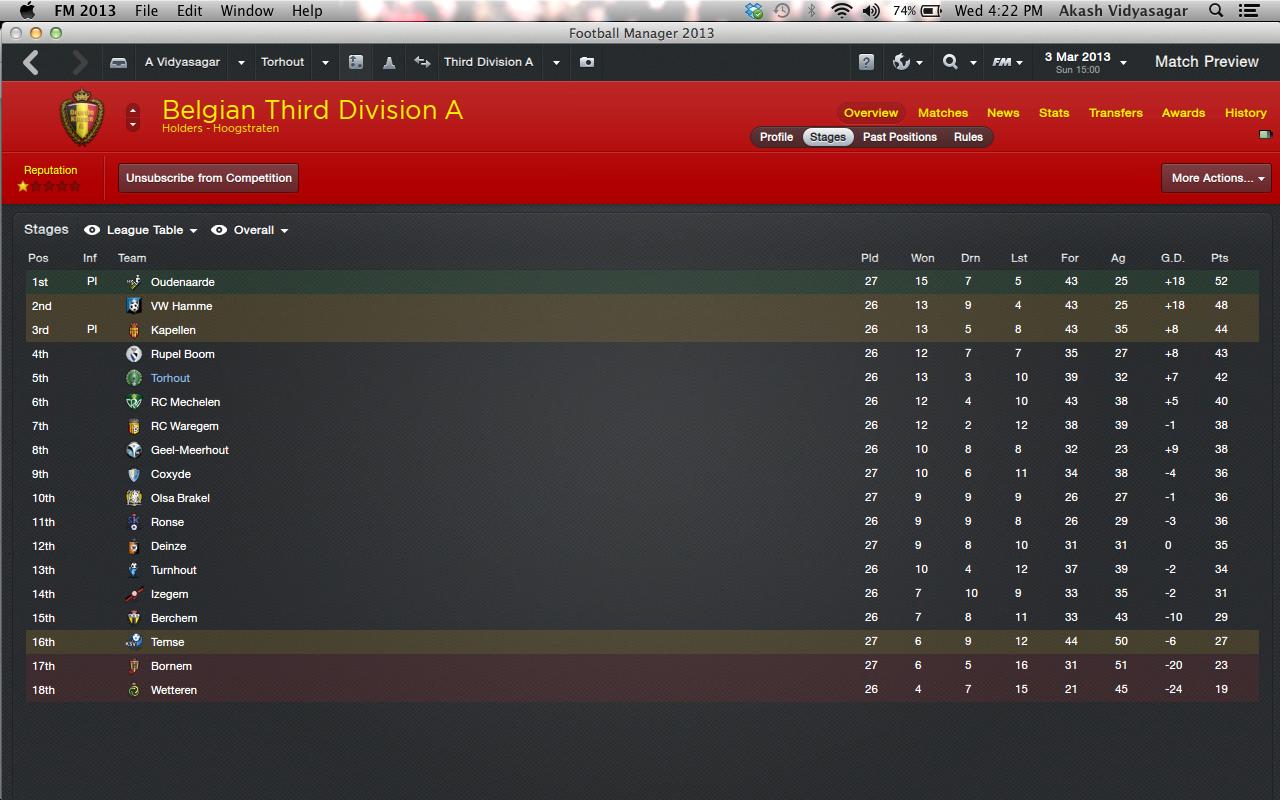 Akash
9 years
It is ridiculous that I haven't yet replied to any comments. I shall start now

TCO
9 years
I think I still deserve that FM14 copy, you see, I posted the comment withing the time allocated to receive the game, I was just using Internet Explorer, therefore I should get the game, also I've made it look formal, so I get the game thank you Akash;)
Login to Quote

I agree completely. I'll send it to you in exactly 2 years, 6 months and 22 days. Keep an eye on your mail.
Login to Quote

Hello all.
It was a slow footballing month, with only three games played in the past 30 days, but there was a lot of work going on in the backroom. After three months of competition, Torhout shortlisted a bunch of youngsters who would train with the club for a month, and the best of the lot will be signing youth contracts with the club. With youth being a huge part of the way the game is played in Belgium, I personally sat through most training sessions, to make sure the best young players join the club.

We continued our strong progress at the end of the season, winning 2 of our 3 games, and being one point behind Oudenaarde in the period. Our overall rise has been gradual, but positive. With only 5 games to go till the end of the season, it is a question of 'Who blinks first?' to see if we can make our way to the Playoffs. 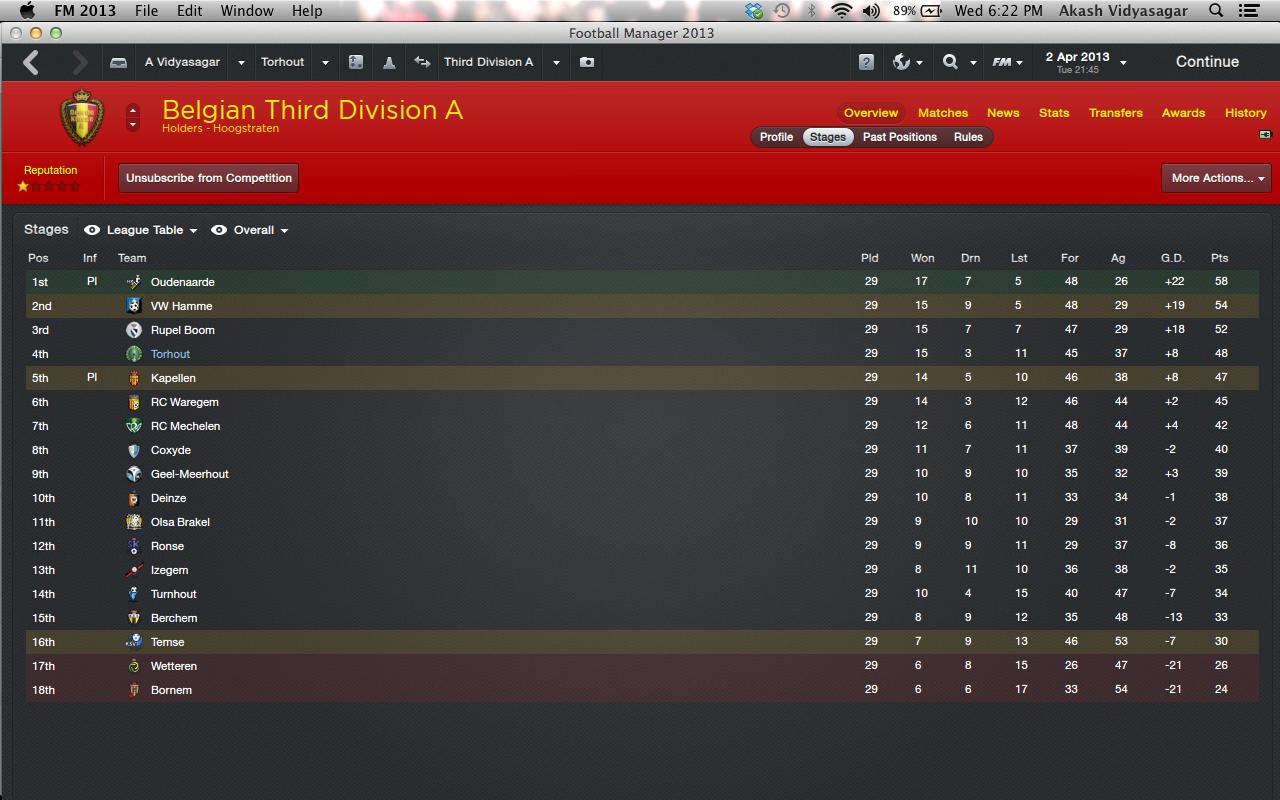 In other important news, we have just secured the services of Niels Peers, from RC Waregem, and will join the club on the 1st of July. He is a great prospect for the future, and will lead our line next season. 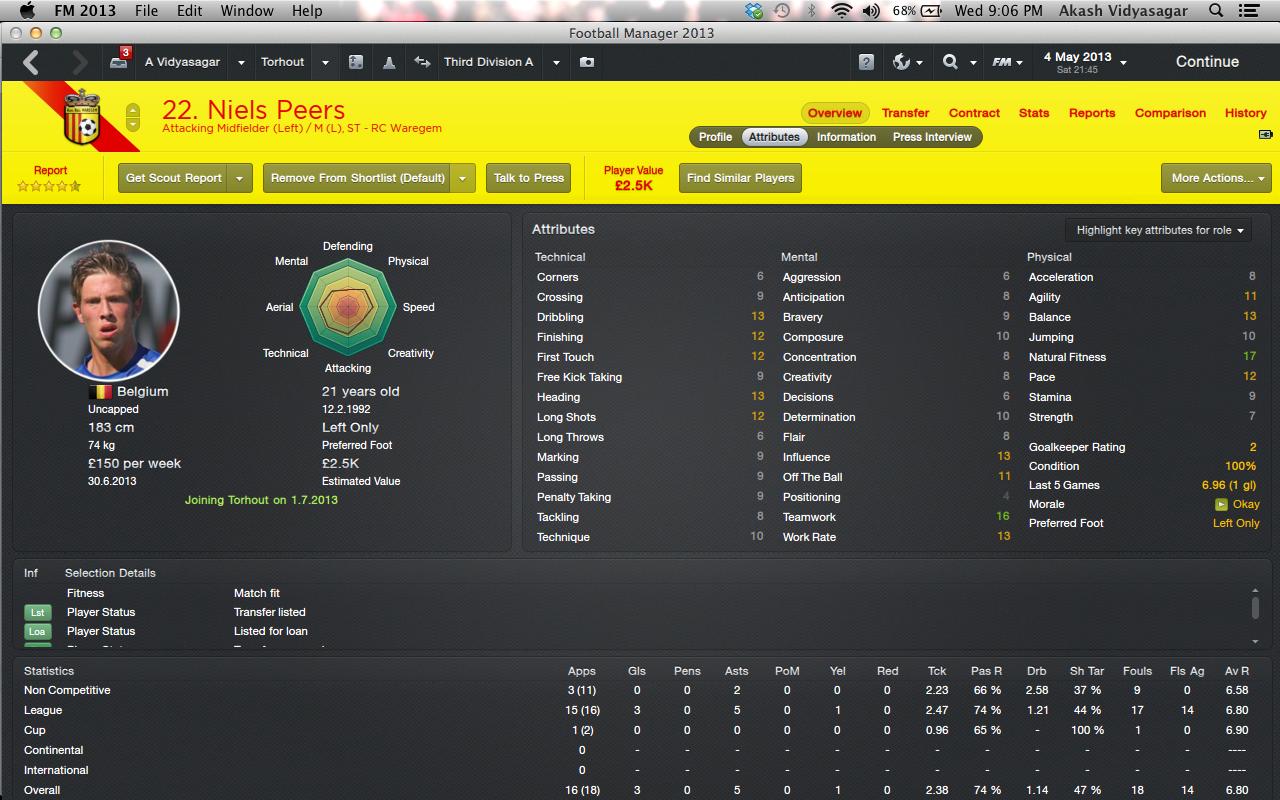 Rablador
9 years • Edited
I honestly don't get why you're not top, great results!

Basically, Oudenaarde just never lose. It is so ridiculous! I hope that changes in the last 5 games.
Login to Quote

I agree completely. I'll send it to you in exactly 2 years, 6 months and 22 days. Keep an eye on your mail.


Good, I'll be counting down the days;)
Login to Quote


Dear Torhout fans,
To lead off this edition of my 'Fan Address', it is my pleasure to announce that my relationship with this great club has been extended by another year. Although there were two months still left in my contract, the Chairman thought I had done enough to extend my stay here. It took me less than a minute to sign on. This club feels like home already, and I intend on staying home for as long as I can.

Coming back to the footballing side of things, Oudenaarde lost the plot towards the end, no thanks to injuries and bad luck, but it made our job simpler. We didn't have to win all our last matches to reach the playoffs, and with our own injury problems, that was a blessing. We still needed to get the job done, however, and so we did. Just about.

In the end, the team celebrated their qualification, but now, we have the playoffs to look forward to.

Walter
9 years
I like your style of updates, easy and readable.
Great work on the playoff spot, hope you do well!

edu1878
9 years
Due to this story's utter absolute amazingness, I shall create a chant for the fans...

keep it up, and make sure you do torhout proud.
Login to Quote