Hello once again Torhout fans,
Thank you for the massive amount of e-mails you sent to me during the off-season with transfer target options, possible destinations for friendlies or just congratulating me on extending my contract with the club. And unfortunately, I won't be signing Messi's son to the club, which has been the most popular suggestion. The positive response we received for inviting 6 Pro League sides to the Velodroome has appreciated, and a friendly win against Standard Liege was just the perfect way to start the season.

There was no time left to enjoy that victory because the Third Round of the Belgian Cup drew us against non-league side, Beringen. The boys did well and we got through the match with a 3-1 victory, looking forward to our next game against fellow Third Division A side, Deinze. Deinze strengthened their side a lot during the break and are one of the favourites to be in the playoffs, so we needed to do well to win the tie. We ran out comfortable 4-1 winners, much to the delight of the fans in the stands. This victory meant we entered the Fifth Round, the round in which we got thrown out of the competition by Dessel, and as expected, we would be meeting Mouscron-Peruwélz. The fans didn't go into the tie expecting too much, but a 2' goal shocked the opponents and gave the boys the confidence they needed. Now, we await our Sixth Round opponents. 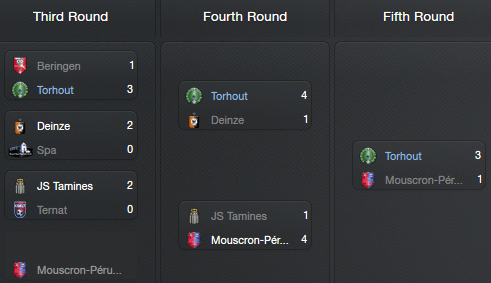 Our league form has carried on from last season, winning 2 out of the 3 games we have played so far, the only draw coming against last year's early leaders, Oudenaarde. Goals have been coming from strikers, midfielders and defenders, so the entire team is playing with momentum.

Our top-striker isn't fancied by lots of people in the media, especially since he was on a 31-hour goalless before joining our club. I took a gamble, and it paid off as Ternier scored within an hour on his debut, and scoring three more in the consequent 5 games. With Yde, Ternier and fellow new signing, Emaankaf, our strike force is looking strong. 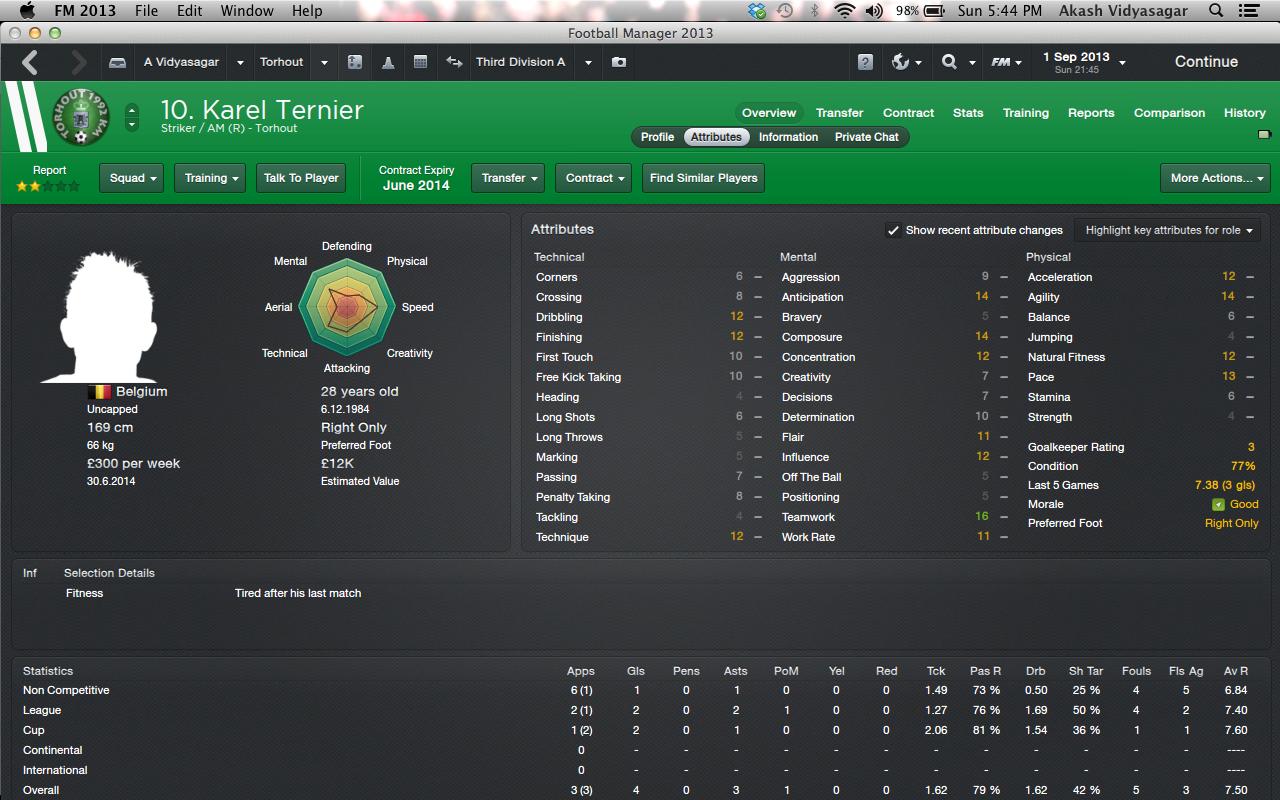 wellsy1498
9 years
A great start to the season


As you know, the first period of the Belgian Third Division comes to an end after the first ten league games are played. Unfortunately, even though we played really well in this period, there were some teams that definitely scored more points. 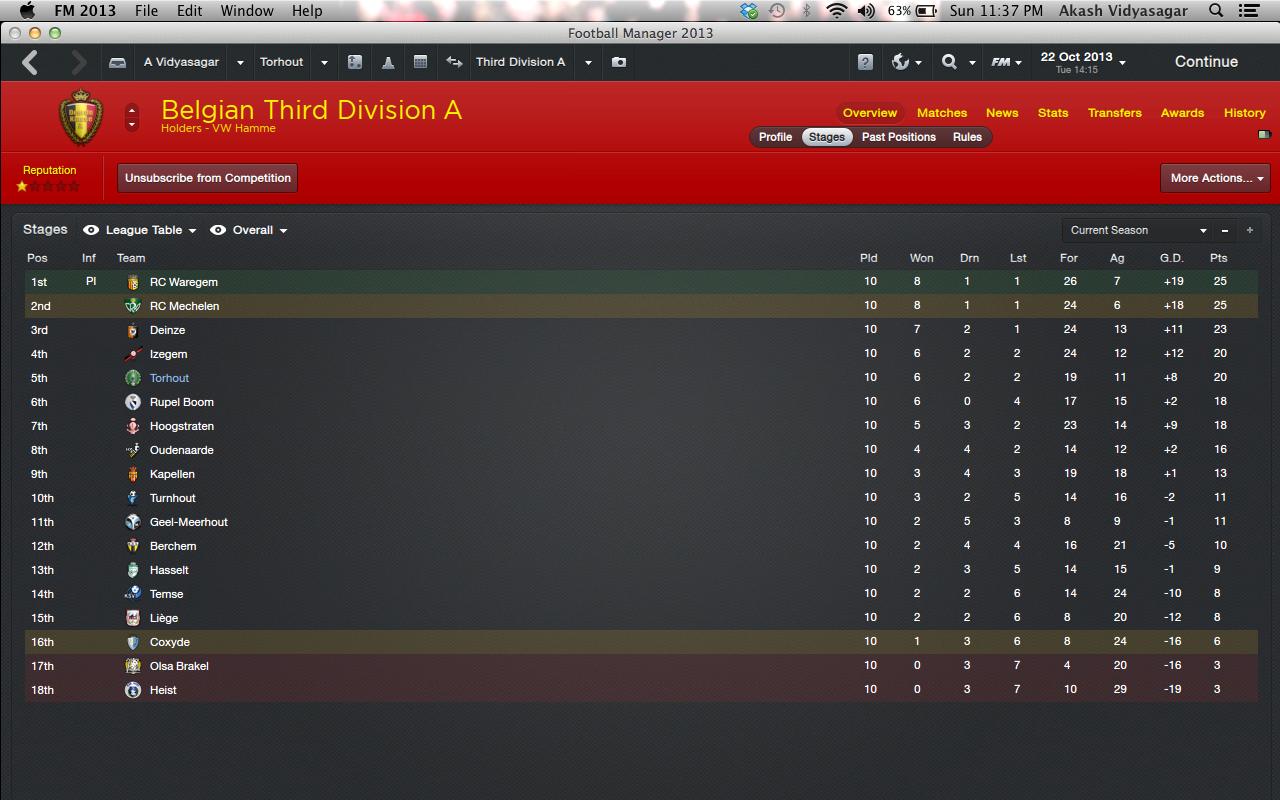 It isn't a surprise to see Deinze and Mechelen do well, but Izegem finishing above us was a real surprise. However, none of these teams fixed their place in the season-ending playoffs. That position was taken up by Waregem, who took top spot with the help of a better goal difference. Actually, we are yet to face Waregem and Mechelen, so we can only assess how good their teams are after facing them.

The biggest thing to come out of the boardroom this period were - not one, not two, but three cash injections by the board. It feels good to know that my board cares about the club and is willing to put some money while I try to work with limited resources.

The one cup fixture played that I haven't mentioned yet was the biggest match we'll play this season. We would be playing against Pro-League side, Waasland-Beveren away. The attendance was nearly 10 times what we normally get at the Velodroome, so it was important that I calmed the boys down before the game. The surprising thing was that the media was giving us a fair shot. Not sure if it was because they thought Waasland-Beveren would be fielding a weaker side (which they didn't) or whether it was because they believed what I said in the pre-match press conference - heart mattered! 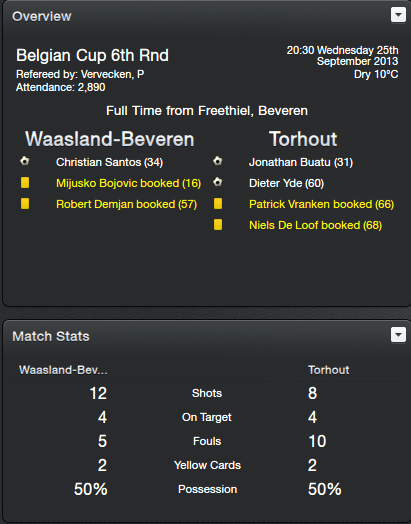 We had done it! We had beaten a Pro-League side in their own stadium. We were overjoyed, and the boys partied through the night. One of our best players on the night and throughout the first period of the season was Jonathan Buatu, who pitched in with a goal, an assist and some crucial last-ditch tackles to get us the victory. 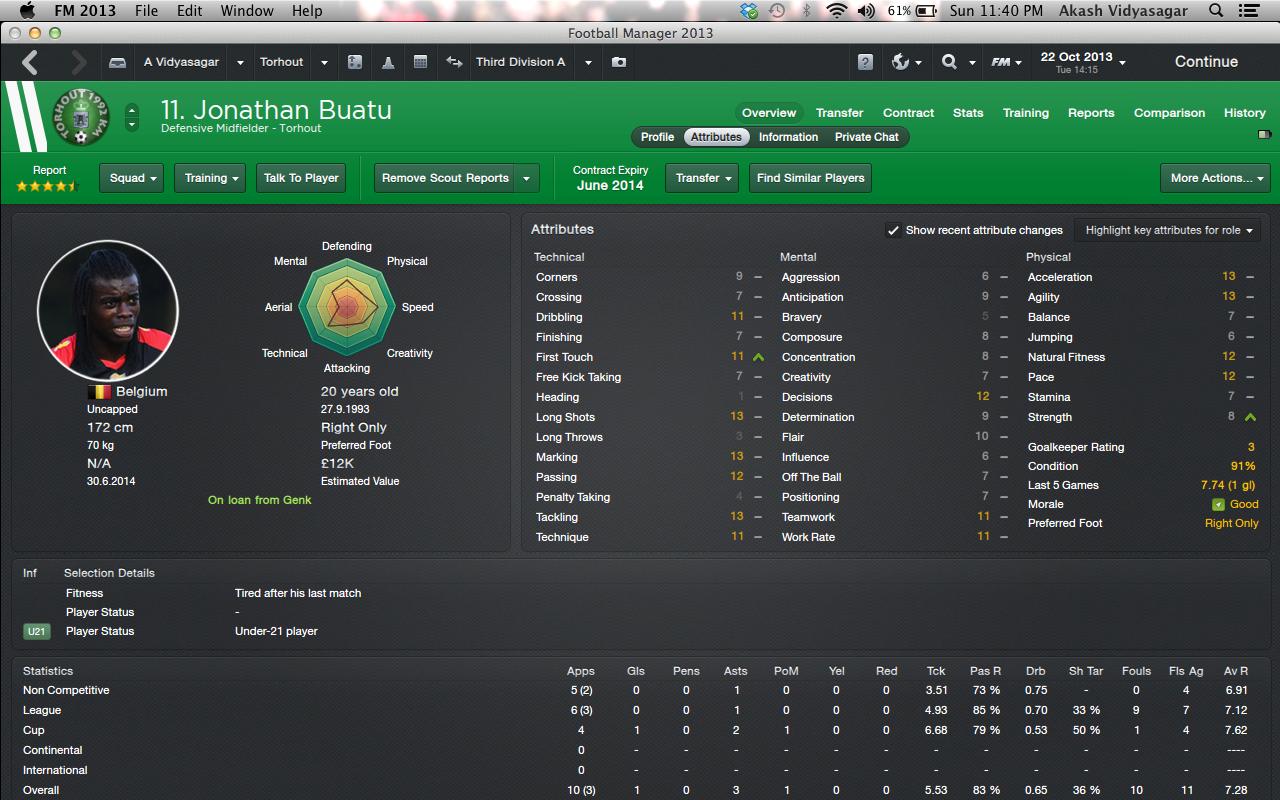 Nathaniel
9 years
Another great addition to this awesome story!
Login to Quote


Dear fans,
First off, I would like to thank the 1600 fans that show up to see our Seventh Round Belgian Cup match against KV Mechelen. We were expected to be hammered against last year's winners, but we held our own, losing out by a single goal. The column might read 'Loss', but the amount we have gained has helped us immensely,especially in the league.

The boys were in high spirits and we stormed through the competition, losing only one game out of the 12 played in this period, against Turhout, who struck a lucky winner.

Those dropped points and a final day draw against Deinze were the difference between us and winning the period, as Rupel Boom ran out winners.

There was nothing to be disheartened about. If last year's Playoff loss taught us anything, it is that we need to aim to win the league, not just one period. The first period top-teams, Mechelen and Waregem, didn't have the best last 12 games, so we have a chance to grabbing the top spot and guaranteeing promotion.

Nathaniel
9 years
Great run of results! Is Turnhout like your rivals? I just say this as they have a similar name to you!

Blue
9 years
These updates are getting better and better! Keep it up Akash


Hello Torhout fans,
Before I begin, I would like for you to welcome the newest members of the Torhout 1992 KM, who joined us on 18th of March, in our Youth Intake. Now, a lot of them did not make the cut to, but a few rough diamonds shone through as the candidates beat the Youth team 4-2. Ismael Ortiz has already starting featuring in the youth league.

Now, to the more important news that everyone in this fine city already knows - we are the champions. It was neck-and-neck, and it involved multiple teams, but when all 34 matches were played, Torhout stood tall. We better last year's Playoff position by winning the league outright. It went down to the last game, but we got the point we needed. I don't even know why I am typing this here, because I saw each and every citizen from around the city celebrating the title victory.

I met the board the next day, where they reviewed my performance as manager over the last 10-12 months, but both parties knew it was a mere formality. I wanted to sign the dotted line just as much as the board wanted me to be there. Getting Torhout into the Second Division was a joint effort that we wanted to take forward.

And the good news continues, as we would like to announce that our stadium, Velodroome, will undergo construction to expand our seating and standing area - to provide attendance by 3,000.

http://store.lid-works.com/Ecommerce/site/images//Generic%20Foam%20Cup.jpg
*Searched long and hard for the picture of a cup that didn't look like the World Cup or any other famous competition, but couldn't find it. So, here is what we'll assume the Belgian Third Division Champions Playoff winner gets.

A good 3-1 victory at the Velodroome set us up nicely for the 2nd leg at Royal Union SG's stadium. The Third Division B winners were a very strong team at home, but with us having a two-goal advantage, we knew they would have to come out of the gates and take their chances, leaving them vulnerable at the back.

A very scoring game that neutrals enjoyed, but we controlled our excitement till the final whistle blew. We had won the Champions Playoff, beating a side that pundits and fans alike thought were favourites.

Our Belgian success had just begun!
Login to Quote