Blue
6 years
Toon: I'm in shock about it tbh!

TheMS99: I know, I can't remember the last time I started this well!
Login to Quote 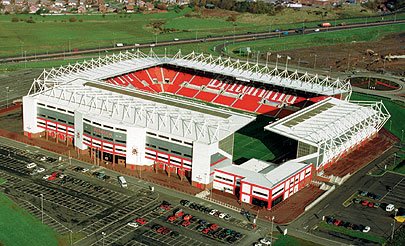 Stoke City are continuing their gradual progress as a club under Mike Bassett, by announcing expansions to both their stadium, The Britannia, but also to the club's youth facilities at the training ground Clayton Wood. This shows that the Potters are definitely moving in the right direction, and that Mike Bassett wants to put his definitive mark on his new club.

Despite only being with the club for a matter of weeks, it already is clear that Bassett has a statement of intent around the club, and wants to be here for a long time. Not only did he spend much of his summer improving the club's finances by shipping out players on extortionate wages, but he has also won his first three competitive games in charge of the Potters. Now, he has continued to improve the image of the club by persuading the board to expand the stadium and the training ground.

Among the fanbase at the Potters, the stadium expansion is the announcement being most talked about, as they believe it is financially the more important one to their club. Whilst currently the Britannia only holds around 27700 people, by the time the work has finished, this will have been extended to just over 30000, amongst the highest in the league. As the capacity increases and allows more people to go to matches, which will increase the money coming into the club over time. This will in turn put Stoke City in a better financial state, and provide security for the club, which is why it has been well-received by the supporters.

However, there is also a certain level of excitement about the plans to improve the youth training ground too, in order to produce better talents from the youth system. In recent years, Stoke City haven't produced a huge amount of talent from their academy, with Ryan Shotton being one of the success stories in recent times. It seems that Mike Bassett now wants to change this during his era at the Britannia, which is his reasoning for persuading the board to extend the facilities available to youth teams at the Potters.

There have also been rumours in the last couple of days that the new manager has also persuaded his board to expand the senior training facilities along with the youth ones, in order to help the first-team players to be as good as they can be. However, this would cost around £1.8m to take the facilities to the next level, which could be a stumbling block for Stoke in their plans. However, if they were to go ahead, then it's rumoured that the improvements would be finished in October next year, along with the youth facilities. The expansion of the stadium to around 30000 seats is expected to be completed in late June next year, in time for the 2013-14 season.
Login to Quote

Lucas
6 years
Good detailed update pal, I read it this time;) Nice job, keep it up!