Verdinho
6 years
I wonder which cushion footed dynamos will arrive at the Britannia?!

I've got more strikers that are better than him, made sense tbh. Stoke City have continued to ease fears of their supporters over a lack of signings by announcing the signing of Yannick N'Djeng, from Tunisian side ES Tunis, for a fee believed to be around £1.3 million. This is the second signing of the Bassett era, after the deal to sign Swedish international Mikael Lustig was completed last week.

It is believed that the signing of Cameroonian N'Djeng is as a replacement for Cameron Jerome, who left the club on a loan deal in the direction of Championship side Wigan Athletic for the coming season, after falling out of favour at the Britannoia after just a season with the Potters. He was part of the most recent cull of wages by the new manager, who deemed Jerome's £20k p/w wage packet an excessive amount for his ability level. It was thought that, based on the early pre-season friendlies, Kenwyne Jones and Jonathan Walters weren't favoured by the new manager Bassett, sparking speculation that he could be about to bring someone in, although few could predict that it would be N'Djeng.

On paper, Yannick N'Djeng certainly looks like a good signing for the Potters. For his last two clubs, JSM Bejaia and ES Tunis (of Algeria and Tunisia respectively), the 22-year-old has scored 47 league goals in 106 appearances, which is a very good return for a striker. Goals from strikers has been a problem for strikers in the last couple of years, and this looks to be an effort to fix those woes. Should N'Djeng do the job, his relatively cheap fee could prove to be a bargain for the Potters.

The Cameroonian is expected to be first-choice for Stoke City alongside Peter Crouch who was a revelation for Stoke after signing for them last summer for Tottenham, scoring a goal nearly every three games. However, Stoke struggled to make their way up the Premier League table, and were linked with a number of players in order to improve their fortunes. Along with Erik Pieters, Marc Muniesa and Mikael Lustig, Yannick N'Djeng joins a squad this summer with a point to prove.

Yannick N'Djeng will certainly be hoping that this move is able to push the striker into the view of Marius Essomba, the Cameroon boss. The striker has already won one cap for his nation, and is expected to have a bright future for the 4-time African champions. So, a good season is vital for N'Djeng in a Stoke shirt. The 22-year-old has been given the number 10 shirt for the Potters, and is thought to have signed a four-year contract on £6.75k a week, and has been well-received by the Stoke faithful.
Login to Quote

Louis O: Haha, you got there in the end

Verdinho
6 years
Aah Yannick N'Djeng. I hear good things about this guy and will be sure to keep an eye on how he does for you

P-KIDDY: I have too, thanks!
Login to Quote

The day I fell in love with a players name, Yannick N'Djeng = <3 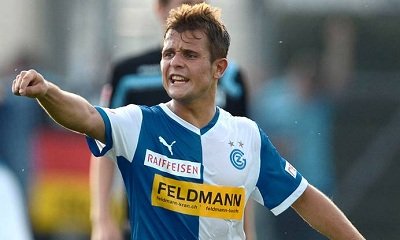 Stoke City have started to pick up the pace of their summer signings now, after sealing a third deal under Mike Bassett, this time for Albanian midfielder Amir Abrashi, of Swiss side Grasshoppers. The 22-year-old has thought to have signed for around £2.3 million, sticking with the theme of staying within the budget for Mike Bassett's men.

With two of Stoke's leading midfielders, Glenn Whelan and Wilson Palacios, having already left the club this summer after the new Potters boss stepped up his efforts to cull the club's high wage bill, it was clear that deals were being worked on, although few expected the Albanian under-21 international to come in, with more rumours naming Nigerian Izunna Uzochukw as the player chosen by Bassett to be the replacement in the Stoke side. Whilst there are still unconfirmed reports that Stoke have applied for a work permit for that player, they have in the meantime signed this youngster too.

Whilst it has taken a couple of weeks for transfers to get moving into the Britannia, fans worries are now being quelled by the new arrivals - of which there have now been three. Much of the time spent by Bassett in the job has been used trying to lower the cost of wages being spent at the Britannia, either by selling, in the case of Whelan, or by loaning out, in the case of Cameron Jerome and also Palacios. However, these players have needed replacements, which Bassett has been able to find fairly cheaply, which shows that the English manager shares none of the fears over finances as his predecessor, Mark Hughes.

Abrashi, the Potters' new signing, has been well-received by their fans, and is believed to be the type of player that the squad is lacking. With Whelan and Palacios having now departed, the squad is lacking in the defensive midfielder department, and the team have lined up with two in defensive midfield in pre-season, so it is vital that they have enough players in that position to counter any eventuality that may occur this season.

Although the details of the contract have been left undisclosed by his new employers, the Albanian is believed to have signed a four-year deal at the Britannia, on around £4.4k per week. If this is true, then it is sticking to Mike Bassett's principles of not being held to ransom by players and their agents when it comes to contract negotiations. All three of his new signings this summer are thought to be on relatively small wages, meaning the new manager has one eye on his club's finances, despite them being in a very healthy state. The former Grasshoppers midfielder has been given the number 8 shirt, and could make his debut in the club's next friendly against River Plate at the Britannia.
Login to Quote

Nathaniel
6 years
Another sensational update! Natural born writer! And another awesome name! Abrashi! I'm naming my child that (If I ever have one!)