We're through to the quarter finals! 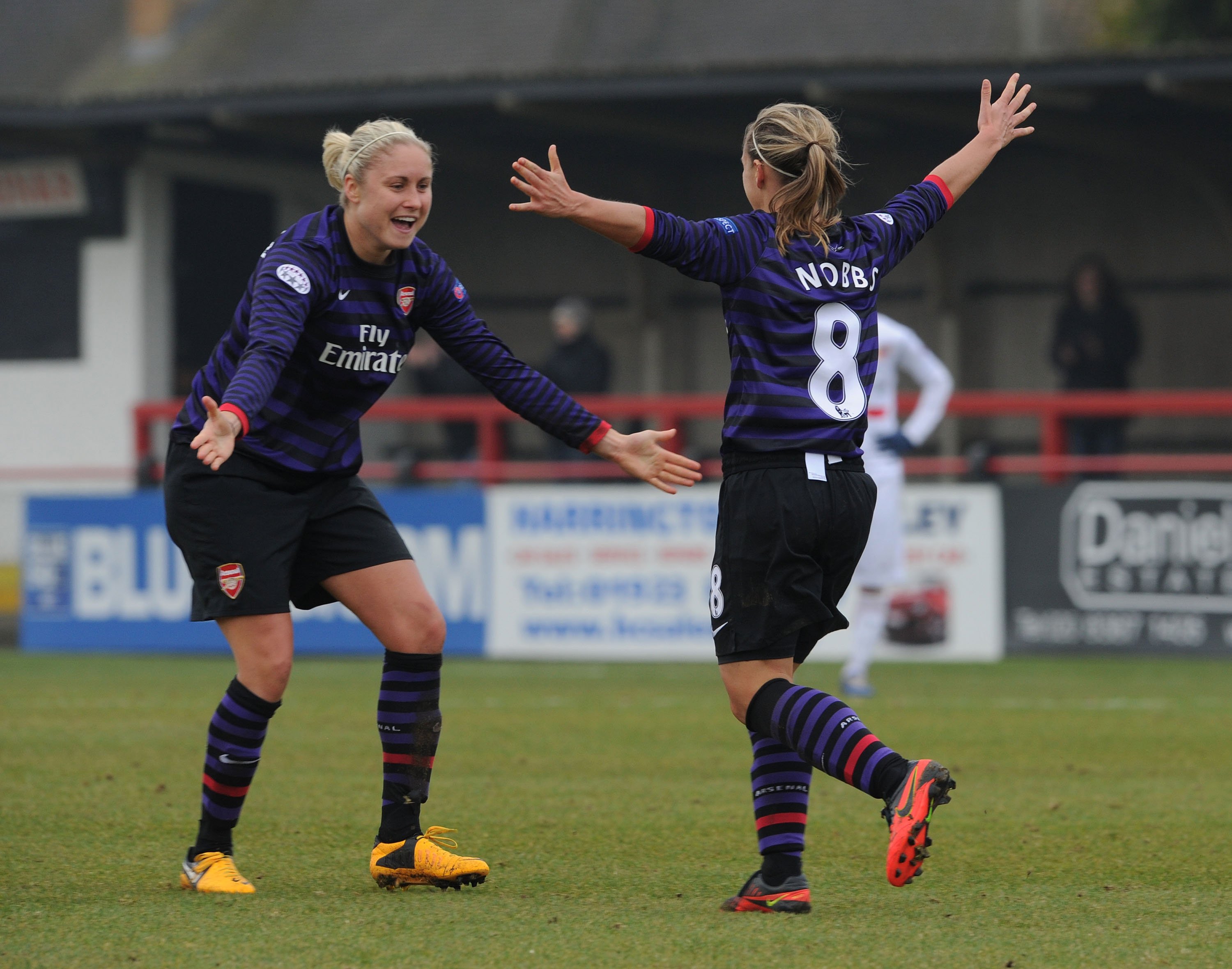 Following a great performance from the ladies over the two legs vs Rutgers University, we are now through to the quarter final where we will face PSG Feminin. A fixture I'm really looking forward to as PSG Feminin are a very good side and it will be nice to see how we fare against them.

The first leg, and the away leg was definitely the tougher leg. It was a cold wet day, with the temperature at 9 degrees celsius. The surface was wet but slick and so the ball was moving around quickly, to our advantage. 514 people came out to watch the fixture, a fairly little number. Gemma Davison gave us lead in the 13th minute, thanks to a curling Rachael Yankey cross from the byline. We looked in control and the weather was certainly playing to our advantage.

The opposition, pulled one back through a well executed counter attack from the half way line. Jonelle Filigno scored the equalizer, much to the delight of around 500 Rutger University fans watching the game as the rain could no longer be considered a drizzle but more of a downpour. Earlier the ball was whizzing around the wet surface but now puddles began to fill the pitch and it was getting hard to pass the ball around. We had to change our tactic as our current short passing tactic would fail in these conditions. We would play long-ball.

In training, we've been working hard on set-pieces. I believe every set-piece gives you a 75% chance of scoring a goal, which is a BIG chance to score. Thankfully our work on the training ground payed off as Kim Little swung in an in-swinger which found Gilly Flaherty who converted with a blistering shot. That would be the winning goal, final score, 2-1 to Arsenal ladies. 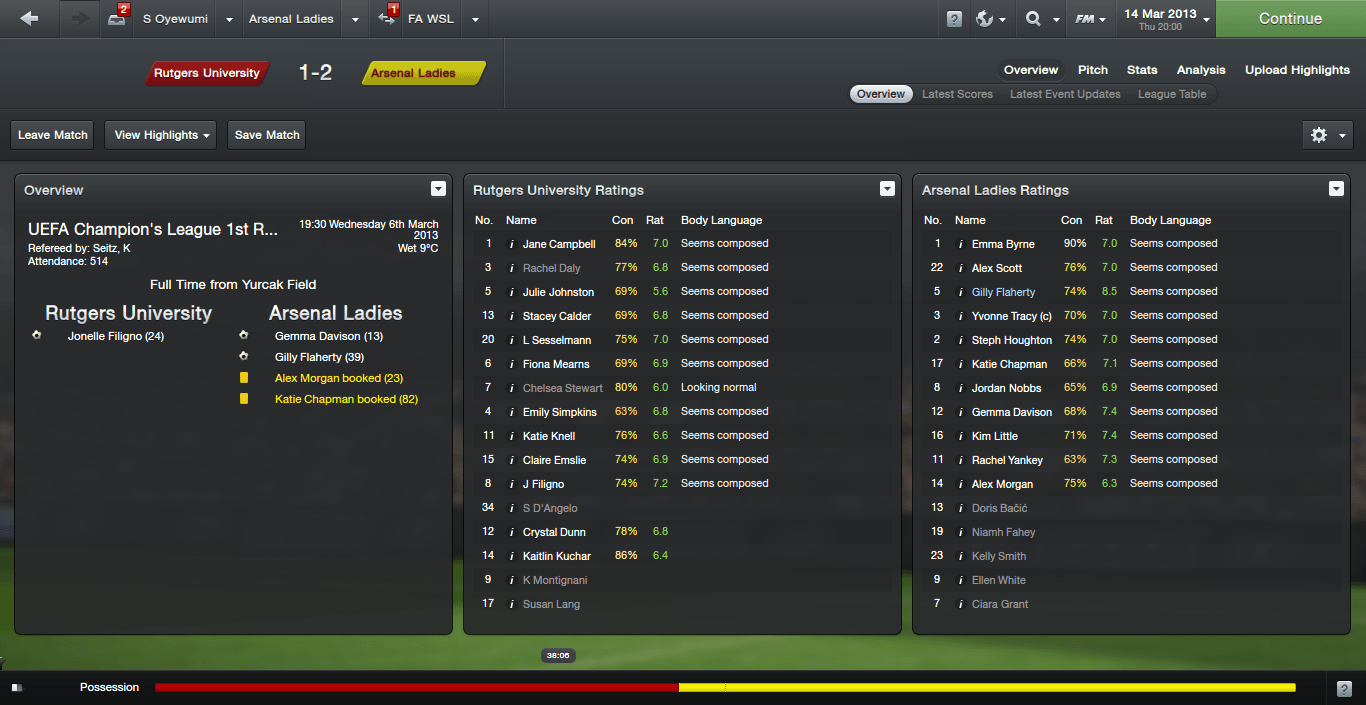 In the second leg, the pressure was off. We were home in the second leg and had already picked up two away goals. Technically, the game was in the bag however we made sure we didn't underestimate the opposition who showed their quality in the first leg. The weather was dry but cold as the temperature was 6 degrees celsius.

There wasn't much of a difference in the lineup that was selected for the second game. I felt there was no need to change it too much as that lineup worked the first time the two teams met. We had a few chances to take the lead but we failed to convert, many of them aerial chances. Finally we took the lead through Alex Morgan who scored a header from a very tight angle.

Throughout the game we looked comfortable on the ball and we had a bit of swagger in our play. It wasn't just one pass after an other, but we were actually entertaining the 661 fans who came out to watch the fixture. In the 75th minute, Alex Morgan completed her brace with a nice finesse shot just inside the box following a chipped pass from Alex Yankey, 2-0.

Two goals ahead in the game and three ahead on aggregate with just 15 minutes to go, we could slow down the tempo of our game and just aim to keep possession and further frustrate the opposition. Once again, our work on the training ground was rewarded as we scored from another set-piece and yet again, it was Gilly Faherty who converted with a header, final score 3-0. 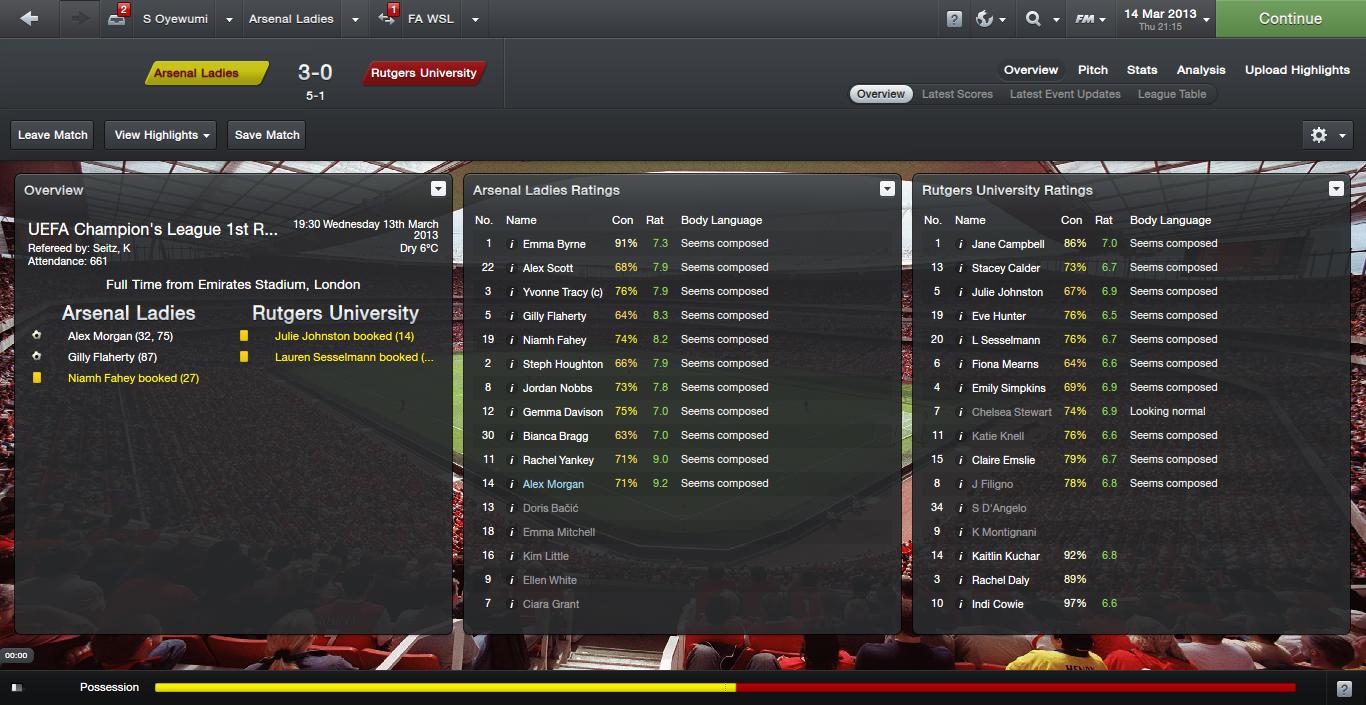 There's a real buzz in the camp and everyone's looking forward to the game. Come on Arsenal!

Oh and good job on getting to the quarters.
Login to Quote

Oh and good job on getting to the quarters.

Thank you very much Walter

I hope that you guys have enjoyed this story, as I certainly have and I aim to make this my best story yet. I don't know about you guys, but I feel this story has a bit of potential to be something great as long as I keep on updating.

One last thing..... COME ON ARSENAL!
Login to Quote

And I think lots of others have to.
Login to Quote

Louis O.
9 years
Aren't those the same rules you had at Al Jazira?
Login to Quote

a_esbech
9 years
Is there a Womens database out there?

Nice storytelling btw. however it should probably state NSFW in the title

Aaron
9 years
woah woah woah...you cant have newspapers in the dressing room? what kind of DICTATORSHIP IS THIS?!!?!?
Login to Quote

Your song you animal ^.^
Login to Quote 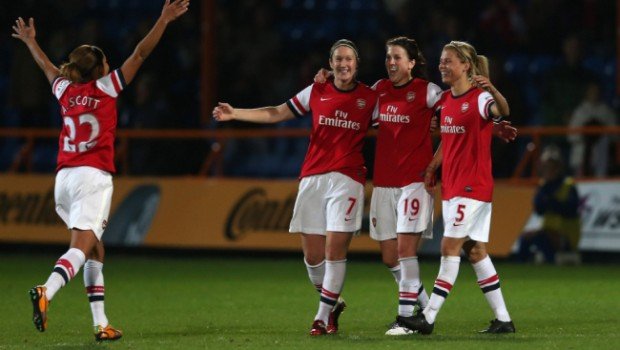 It has been a great start to our domestic season. We've played some excellent football, gotten brilliant results and proved many wrong. When I applied for this job and my application was accepted, many critics claimed that Arsenal ladies would suffer with such an inexperienced manager, I don't think that has been the case so far.

This has been a very busy month for us as we played a total of nine games, in multiple competitions winning eight and just losing a single game. Physically we’re strong and mentally we are strong. It’s very important that we are strong in both aspects, if not we will struggle in our matches.

Our one and only defeat came against Doncaster Rovers Belles, a game that we really should have won. We took the lead very early in the game, in fact just minutes after kick off. After that goal, the ladies got a bit carried away. Taking the lead so early in the game, away from home, versus such opposition, it was more or less a miracle. Our complacency led to us conceding two goals and leaving Doncaster empty handed. The girls were gutted but hopefully this would be a learning experience.

There is one thing I have been disappointed about and that is the amount of fixtures we have had to play, especially with very few days between each of our matches. This has now taken a toll on the condition of our players and this has had a negative effect on us. With a fairly thin squad, we’ve had to call up various u21’s to act as cover, some even started.

All in all, I’ve been extremely impressed with the ladies; even though it’s only a month in they’ve made me very proud! However some improvements need to be made. In training for the next month we will be working on ball control. Too often the ladies lacked composure on the ball and just whacked it hoping for a player to get onto it. I want them to be able to look up and find their team mate. Also it’s essential that they’re confident on the ball.

In the league we are currently lying in 1st place with a total of 12 points. Chelsea Ladies, who we defeated 3-1, are just behind us on goal difference. Hopefully we can create a gap at the top.

Meanwhile, in the Continental Cup, we are also leading our group, group A. So far we have played two games and have won two games meaning we currently have six points. Everton Ladies are in second place with three points.

Our UEFA Champions League quarter final isn’t till the 12th of June so we have plenty of time to prepare ourselves. Those two games will be season determining. All the ladies are raring to go following missing out in the past.

Here are our fixtures and results:

You are reading "Arsenal ladies: Anything men can do, we can do it better!".