Fans Player of the Year – Thomas Lyskov
Login to Quote

kingcraigan
10 years
Eastwood Town Season 5 – League 1
I am so happy to get promotion from League 2 at the second attempt and should hopefully be able to compete in League 1. It will be tough with the calibre of teams and four relegation spots but I think we have enough about us.

Season 5 target – MID-TABLE MEDIOCRITY
Transfer Budget - £0
Wage Budget - £32.21k per week
At last, a decent budget to spend my wages on. I think my priority will be on stellar signings for each area as we already have a decent squad.
Login to Quote

Overall some good transfers there, all those players have decent stats for this level. I had a small crisis at the club when all the staff walked out at the end of their contracts and I had forgotten that I had been reminded since forever. Need to get this club sorted!
Login to Quote

York City 1 – 3 Eastwood Town
I don’t like pre-season friendlies at the best of times, and with only one staff member at the club I was more focussed on improving the staff situation than anything else.

Eastwood competed in their first match at League One level with a sellout attendance at Coronation Park. Southend however, gave the Badgers a taste of how tough this league will be with a 2 nil victory.

Peterborough Ease to Victory. Eastwood Town put in a good performance in the cup against Championship opposition but the Posh inflicted a second home defeat on Craig Chaplin’s men.

Eastwood Town Fortunate To Beat Palace. Eastwood Town travelled to Selhurst Park to face recently relegated Crystal Palace and it was the Badgers who came away with all three points. Crystal Palace had most of the chances but it was a man of the match performance by new signing Joe McKee that drove his side on to the win.

Eastwood’s Poor Performance Adds To Disappointing Defeat. The Badgers travelled to playoff favorites MK Dons hoping to continue their form. However it was the Dons who dominated the game and should have won more than the scoreline suggests.

Quality Of Possession More Important Then Quantity. Eastwood Town welcomed Charlton to Coronation Park and they put in an excellent performance to win 3 – 1. Despite the Addicks having the lion-share of possession the Badgers had the incisiveness to finish the chances they were given and to chalk up another win. 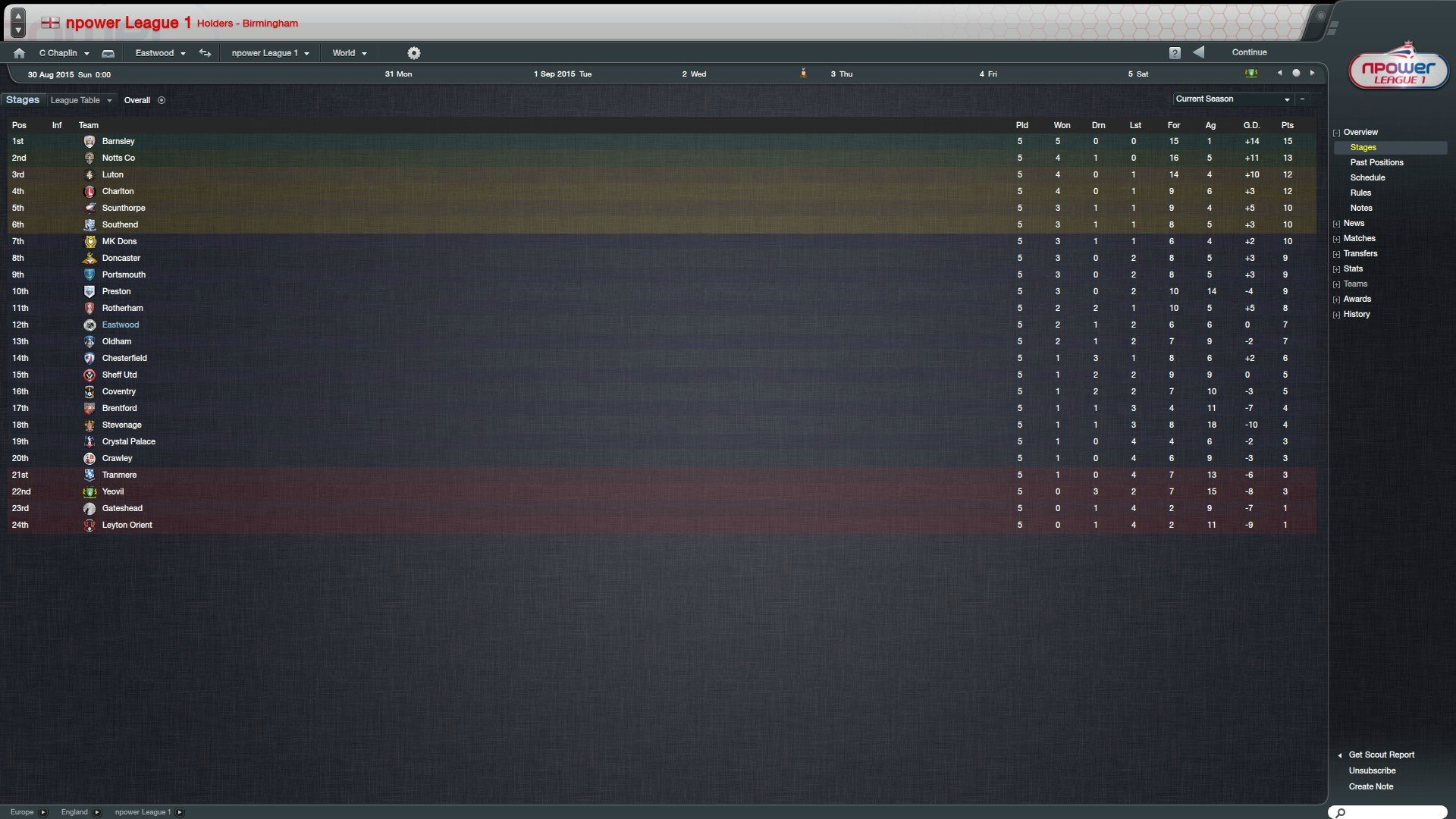 Bradford City Pay The Penalty. Eastwood Town travelled to Bradford with a host of changes for the JPT. Bradford had the better of the game and it took a poacher’s effort from Akwasi Asante late on to level the match. The Badgers outclassed Bradford to go through on penalties.

Eastwood In Control As Sky Blue’s Brushed Aside. Eastwood Town hosted Coventry in a close game where Eastwood came out on top. The Badgers went behind early but rallied well to score a 2-1 victory at home.

Honours Even At The International Stadium. Eastwood travelled to perennial rivals Gateshead for the first of their meeting this season. Gateshead got off to a flyer with an early lead and it took some strong words (and some smashed tea-cups) to inspire the Badgers to turn it around. Eastwood would have taken all three points if not for a heart-breaking equaliser from Gateshead right at the death.

Eastwood Lucky To Draw. The Badgers made their first visit to Fratton Park and almost left with a famous victory. Akwasi Asante put them ahead just after half time and the Badgers limited Pompey to long-range efforts. With time running out, Portsmouth equalised with the last set-piece of the game.

Eastwood Demolish Brentford In League One Encounter. With Eastwood Town in good form they welcomed Brentford to Coronation Park at the Bee’s must have wished they stayed at home. Eastwood managed to put 7 past Brentford with goals coming from all over the field. Eastwood carry on their unbeaten run that puts them just out of the playoffs 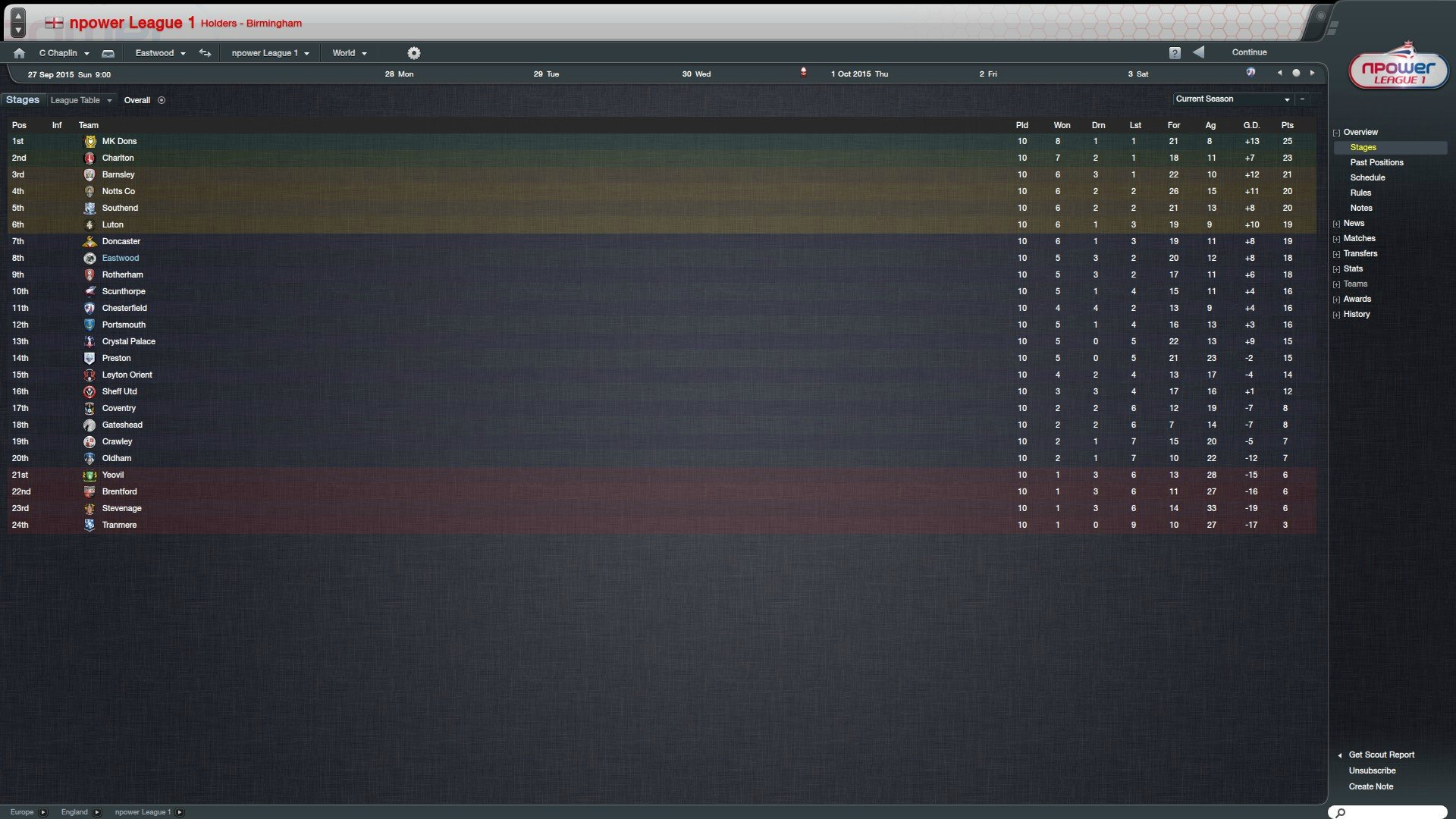 League Cup: Lost in 1st round (v Peterborough)
JPT: North 2nd Round - Vs Sheffield United (A)
Login to Quote

What skin are you using btw?
Login to Quote

What skin are you using btw?

The skin is called steklo x2, quick google and you'll find it
Login to Quote

Eastwood Town Ease To Victory. Fresh on the heels of a big win at home, Eastwood produced another dominant performance this time against Chesterfield. Akwasi Asante scored a great hat-trick as the Badgers continue doing miracles.

Blades Shocked By Incisive Badgers. Continuing their good form this season, Eastwood Town travelled to Bramall Lane to face a under-performing Sheffield United. Despite having the better of the first-half, the Badgers went into the break behind. After some stern words from the manager, the Badgers rallied in the second half and produced a famous victory, Akwasi Asante putting in another MOM performance.

JPT Draw: Eastwood Town will be away to Walsall in the North Quarter-Final.

Eastwood In Control As Millers Brushed Aside. Eastwood Town faced an away trip to last season’s promotion rivals Rotherham. Similar to last year, Eastwood put in a good performance to gain three points.

Eastwood Edge Out Opponents In Close Encounter. Coronation Park hosted Scunthorpe with the Badgers on a run of victories. Akwasi Asante gave Eastwood the lead early on but Scunthorpe hit back early in the second-half. Asante scored his second goal late on and delighted the fans.

Quality Of Possession More Important Than Quantity. In a rematch of their JPT game earlier in the month, Eastwood travelled to Sheffield. This game ended 3 – 1 as well with the Badgers making good work in front of goal to record another victory.

Eastwood Hold Doncaster To Draw. Eastwood Town recorded a lucky point away to Doncaster. The Badgers had few chances and it wasn’t until late in the second half that Doncaster eventually equalised. 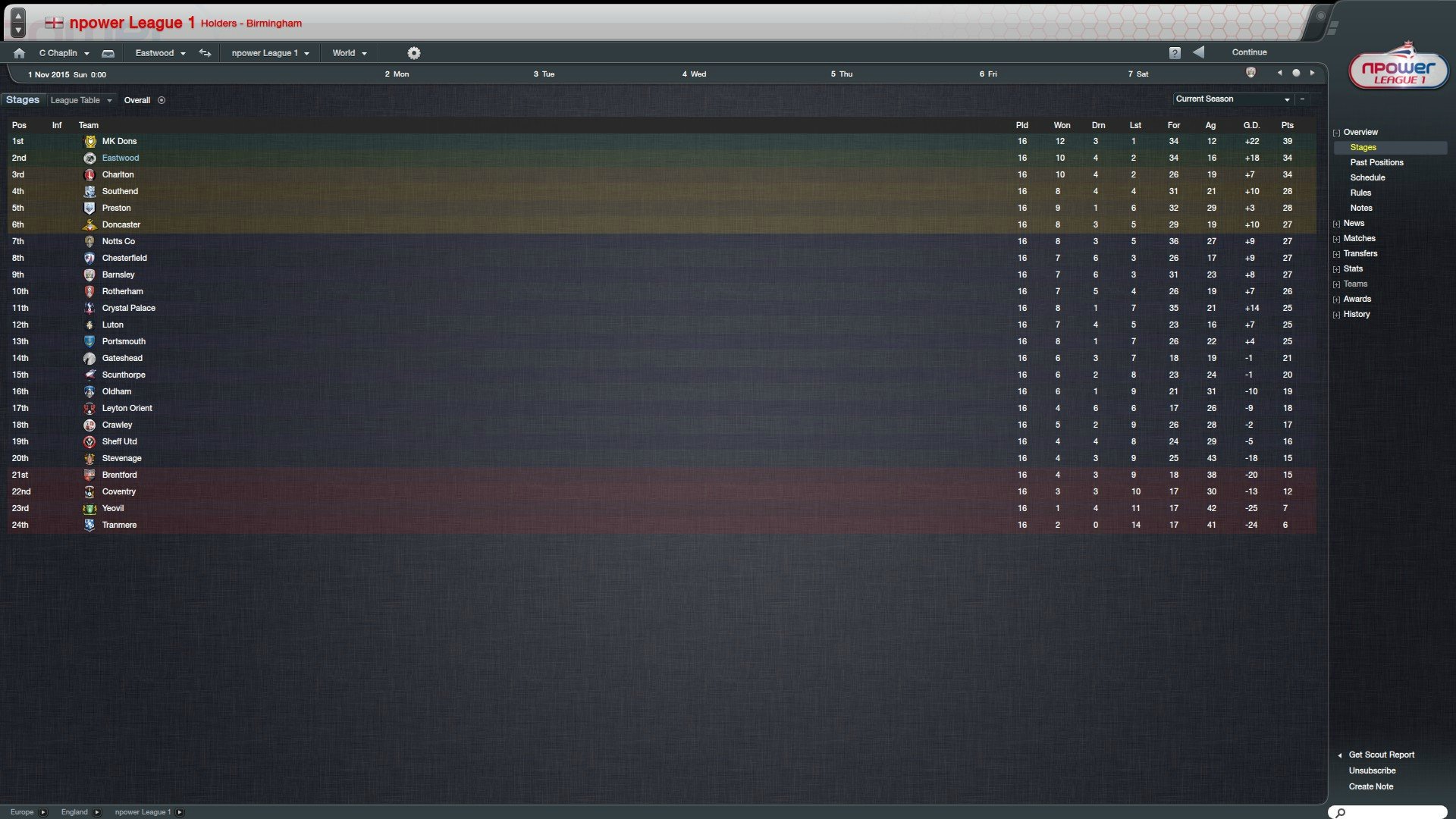 Honours Even At Oakwell. Eastwood Town travelled to recently-relegated Barnsley in a mood to carry on their good form against the teams from South Yorkshire. An even game ended all square with Akwasi Asante grabbing a brace and the MOM.

Badgers Powerless To Resist As Walsall Dominate. Despite being massive favorites, the Badgers slumped to a heavy defeat to League 2 Walsall. Fielding many changes from the league game, Eastwood could never get into the game and limped out of the cup.

Confident Performance From The Badgers. With the television cameras watching, the Badgers put in a good performance against Blue Square South side Hampton & Richmond. Eastwood had the game finished by half-time and are through to the next round

Superior Finishing Provides Cutting Edge For Eastwood. Coronation Park hosted another good Eastwood performance as the Badgers ran put winners over an average Oldham side. Despite the match being a tight affair, it was the finishing of the Badgers that gave them 3 points.

Eastwood Powerless To Resist As Notts County Dominate. Eastwood travelled to Meadow Lane to face an in-form Notts County side and it was the Magpies who ended up victories putting in a good performance that just checks Eastwood’s momentum in the league. 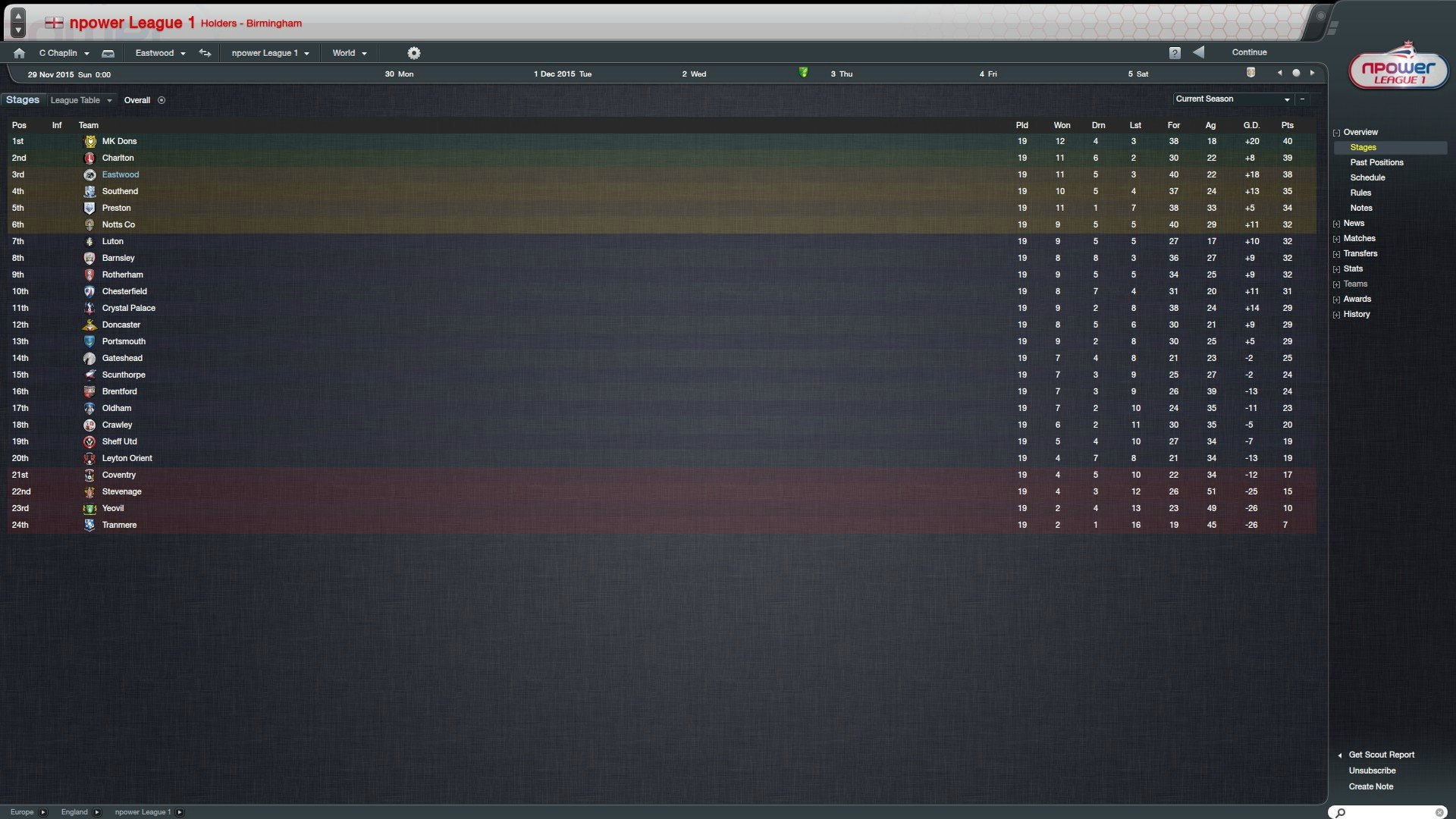 jamstoe
10 years
Akwasi Asante is an absolute beast!! Got him on loan for the first season in my Oxford United save and he scores quite a few goals with James Constable!
Login to Quote

1650 Yo
10 years
Well Done! i never really play below league 2 so to see a story doing well with lower than league 2 team is always a good read

congrats on all youve achieved

i have Crawley Town in the Europa League at the moment, and i have to say im doing better in that than in the League lol nevermind eh...?
Login to Quote

Eastwood Hold Crewe To Draw. Being huge favourites for a tie once again affected the Eastwood team as they struggled to a draw with League Two Crewe. Crewe took an early lead but the Badgers hit back with 2 goals. Though just as they nearly had the game won, Crewe equalised to force a replay.

FA Cup Draw: Eastwood or Crewe will be away to Premier League Bolton in the 3rd Round

Eastwood Show Class To Upstage Crawley. Back in the league, Coronation Park hosted another exciting game as the Badgers and Crawley shared a five goal game. Eastwood came out on top however as Martyn Woolford put in a MOM performance to give his side 3 points.

Eastwood Hammer Crewe. The Badgers were in no mood for another cup upset as they hammered Crewe 4 nil at home. Eastwood had their defenders to thank as they kept a clean sheet and managed to score 3 of their goals. Eastwood now travel to the Reebok again to face Bolton.

Honours Even At Prenton Park. Eastwood travelled to Merseyside to take on a Tranmere side at the wrong end of the table. Similar to the match against Crewe, Eastwood went behind early but rallied to take the lead in the closing stages, but it was a late equaliser by Tranmere that denied them all three points.

Vintage Display Ensures Eastwood Victory. For the last game of the year, Eastwood travelled to Stevenage. Eastwood had the best of the game and the scoreline did not reflect Eastwood’s superior play. The only black mark was Chez Isaac’s red card that left both teams down to 10 men. 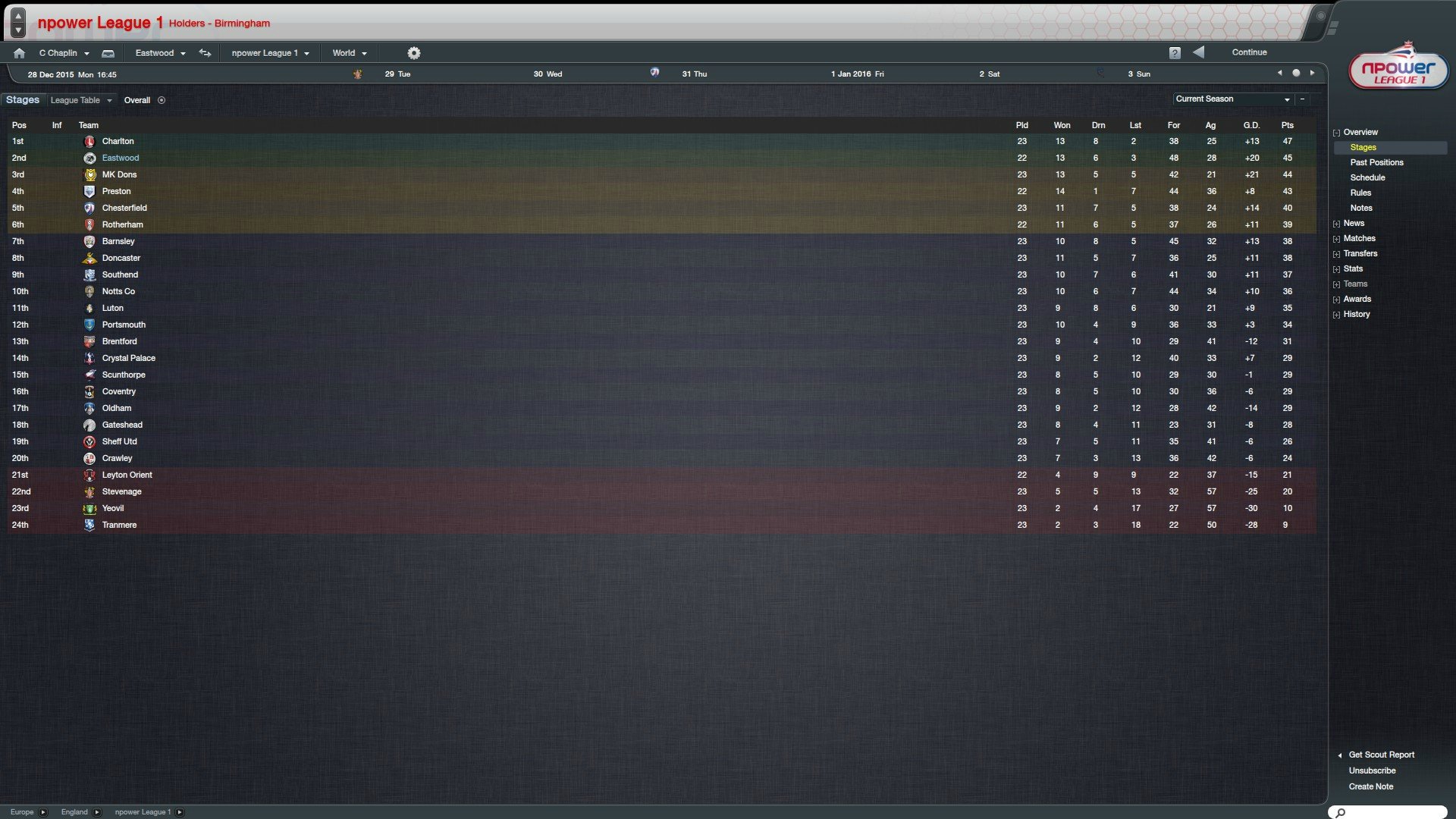 Eastwood 2nd with 45 points - two points off top with game in hand!