Hahaha it's a good way to get free young talent xD

Cheers, yeah Simone looks really good. Scarponi is the only good player of my own though, the others were just to beef up my reserve team a bit haha.
Login to Quote 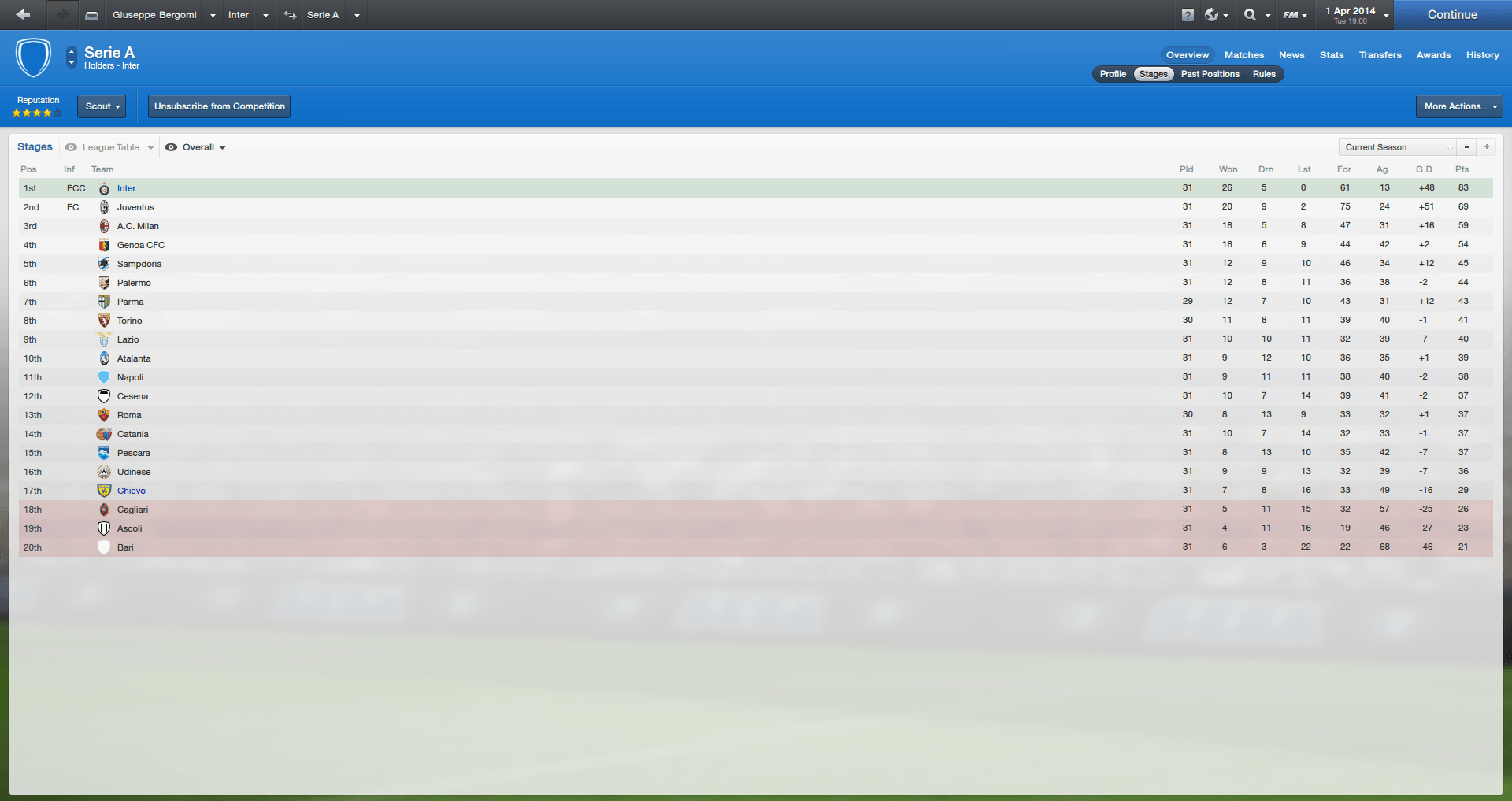 Still 14 points clear. It would take a monumental meltdown to give up the title now. 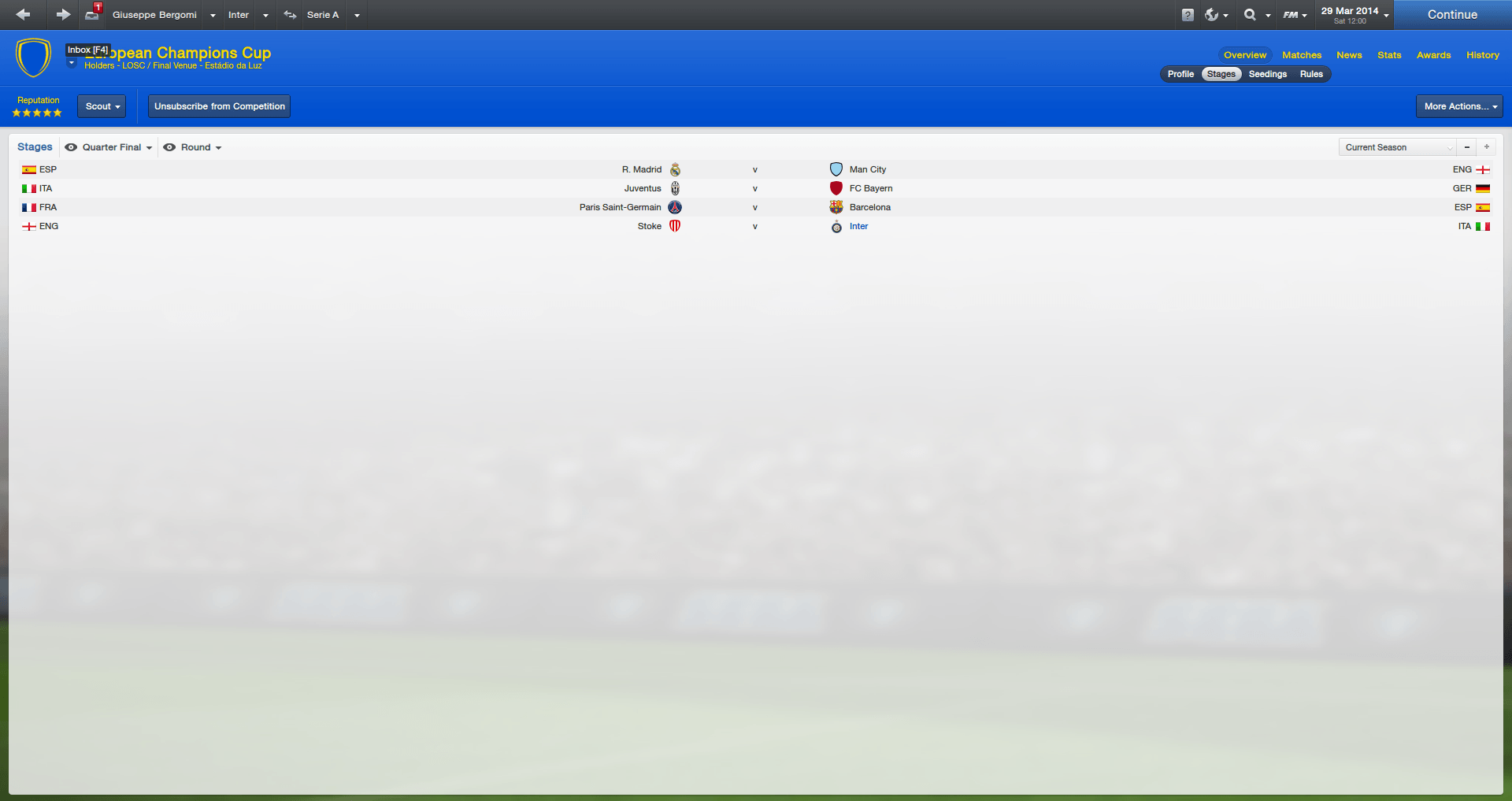 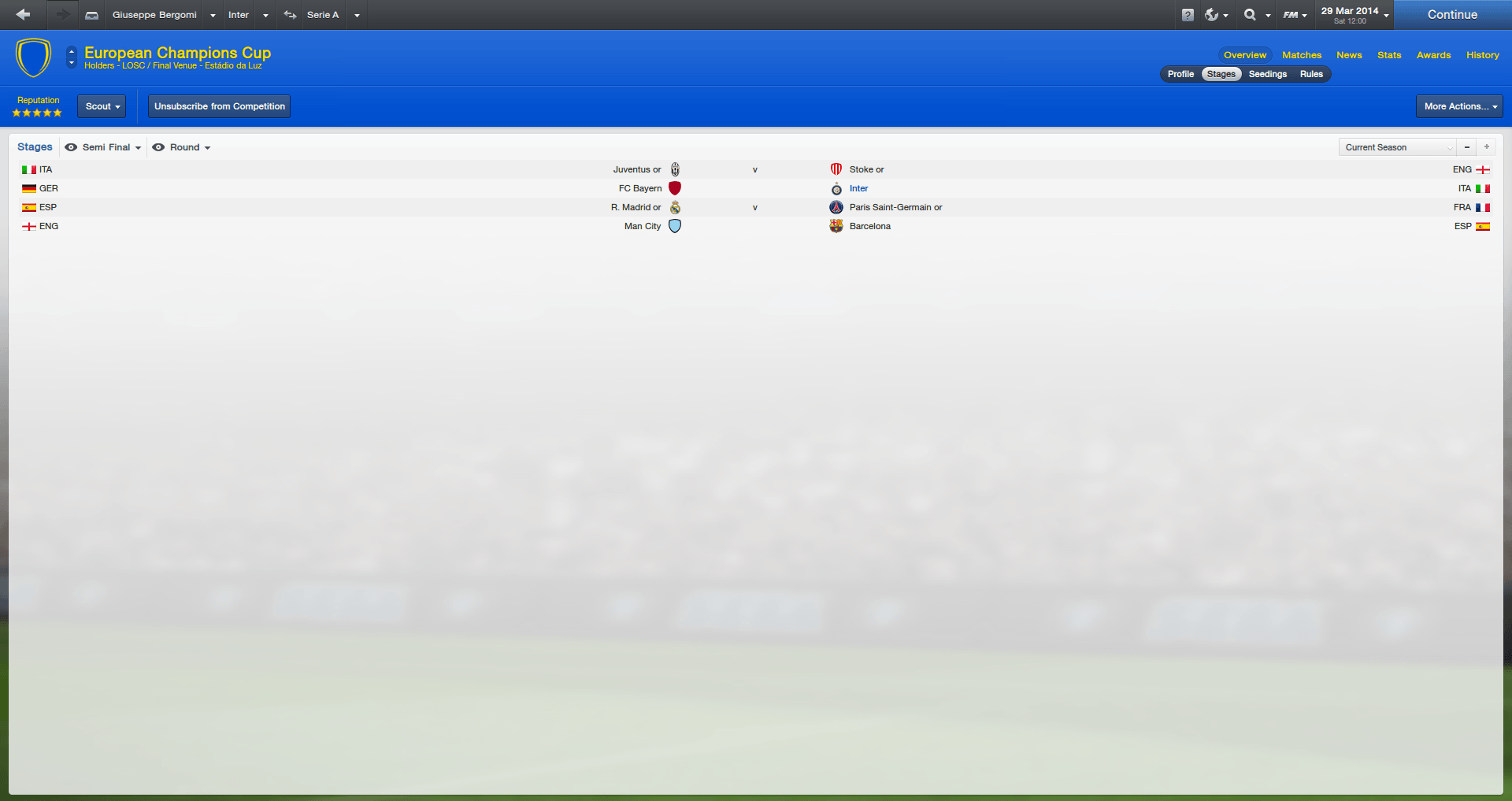 Some decent draws to be honest. I fully expect us to beat Stoke and move on, from there Juventus is a familiar rival that we've beaten a few times this year, though Bayern looks tough opposition.

After thoroughly defeated Juventus 3-0 over two legs, we will face Palermo in the Coppa final. We beat them comfortably 3-1 earlier this month, and hopefully we can add a second straight Coppa Italia to our record. 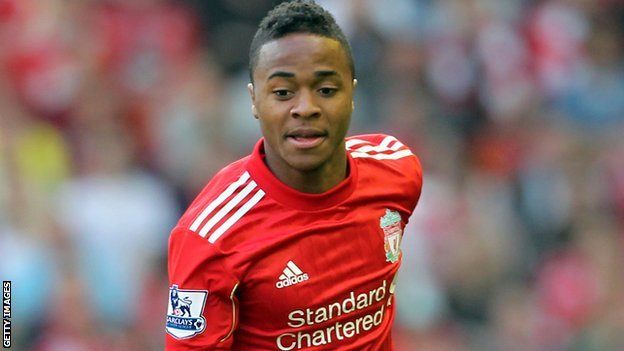 This was an even better month for us. A very unfortunate draw against Pescara, but after we were down to 10 men it was always going to be a struggle. Our second straight 7 game month was not made any easier by going into extra time against LOSC Lille, either. The results, however, I am extremely pleased with, as we've beaten Juventus yet again and we've knocked out the Champions of Europe form the UCL. Hopefully things can continue in this vein for the rest of the season.
Login to Quote

3 goals, not bad, plus a brace against Roma. He's so explosive and so good on the ball, a real game changer, definitely worth 8.5m. Thanks for reading

Khejan
8 years
Nicely done Neal. Nice to see you getting something good from Sterling too =) Definitely a good capture, and a bargain at £8.5m =)
1
Login to Quote

AlexSonwild
8 years
Great results as always! Keep it up

Thanks Alex, yet another good month, if only Sissoko didn't act stupid against Pescara.
Login to Quote

Luis Fernando Muriel is a new signing at the San Siro, having joined Inter from Udinese last summer when his contract expired. He's been on red hot form of late, scoring 7 goals in his last 11 appearances, taking the 22 year old striker's tally to 13 for the season, tied second highest on the team. Today, we had a chance to sit down with Luis and ask him a few questions. 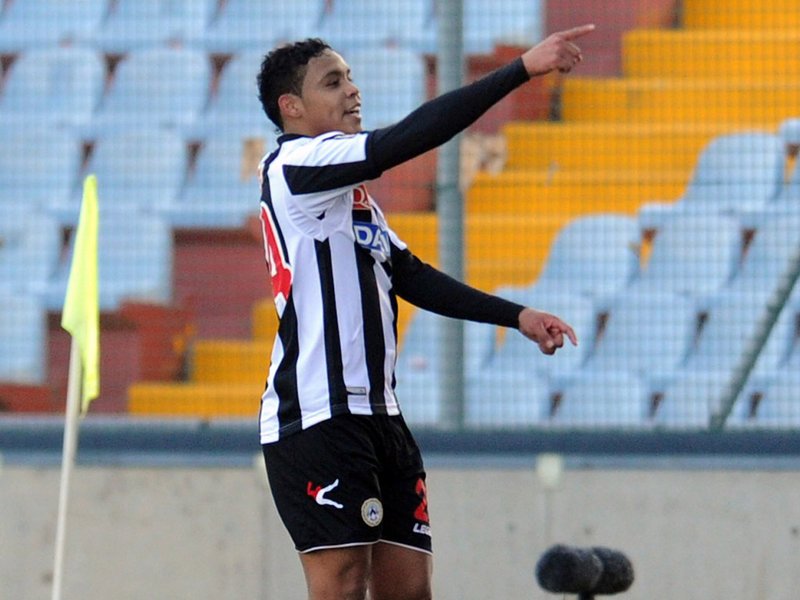 Reporter: Hi Luis, thanks for putting aside some time for this today.

Muriel: Hello, it's no problem. Fire away.

Reporter: How have you settled into life in Milan? It must be quite the change from the smaller, quieter Udine.

Muriel: It's been fantastic. Milan is a wonderful city, and all my friends on the team have really nice and helped me settle in. There is so much to do here, and always something going on, and of course the best football team in Italy! Of course, I miss Udine and the people there, but I am moving forward in life and am enjoying my stay here in Milan.

Reporter: You've been in fantastic form of late, scoring 7 goals in your last 11, more goals than you've scored the entire rest of the season. Why do you think this is?

Muriel: Thank you, and I think it's all in my confidence. At the beginning, it was huge to come here and step into the massive shoes of players like Antonio [Cassano] and Rodrigo [Palacio], and it was nerve-wracking. However, Giuseppe [Bergomi] has had great faith in me and given me many chances, and now with that confidence I've started to score again.

Reporter: What is your relationship with Giuseppe Bergomi?

Muriel: He is fantastic. He played at the highest level as a footballer and you can tell his experience, he really knows what he's doing. More than that, though, he's very friendly, willing to talk if you need it, and a funny man. He's got that fire to succeed that really inspires us all, and he's honestly changed my life.

Reporter: Who is your best friend on the team?

Muriel: It'd have to be David Ospina. He is Colombian like me, and it's always good to have someone like you in the team. It's nice to have someone to remind you of home, and we spend a lot of time together outside of football.

Reporter: Who's the biggest joker on the team?

Muriel: Ademilson, for sure. He's always joking, keeping the mood light. Of course we are all focused on the training ground and on the pitch, but it's good to have a distraction. I remember once at training he hit a ball at Pippo [Coutinho] and that resulted in a good 3 minute chase around the ground.

Reporter: That's all, Luis, good luck for the season.

Muriel: Thank you, the pleasure was mine!
Login to Quote

Northwood
8 years
What kind of bizarre parallel universe are you playing inn where Stoke is in the Champions League quarterfinal in 2014? 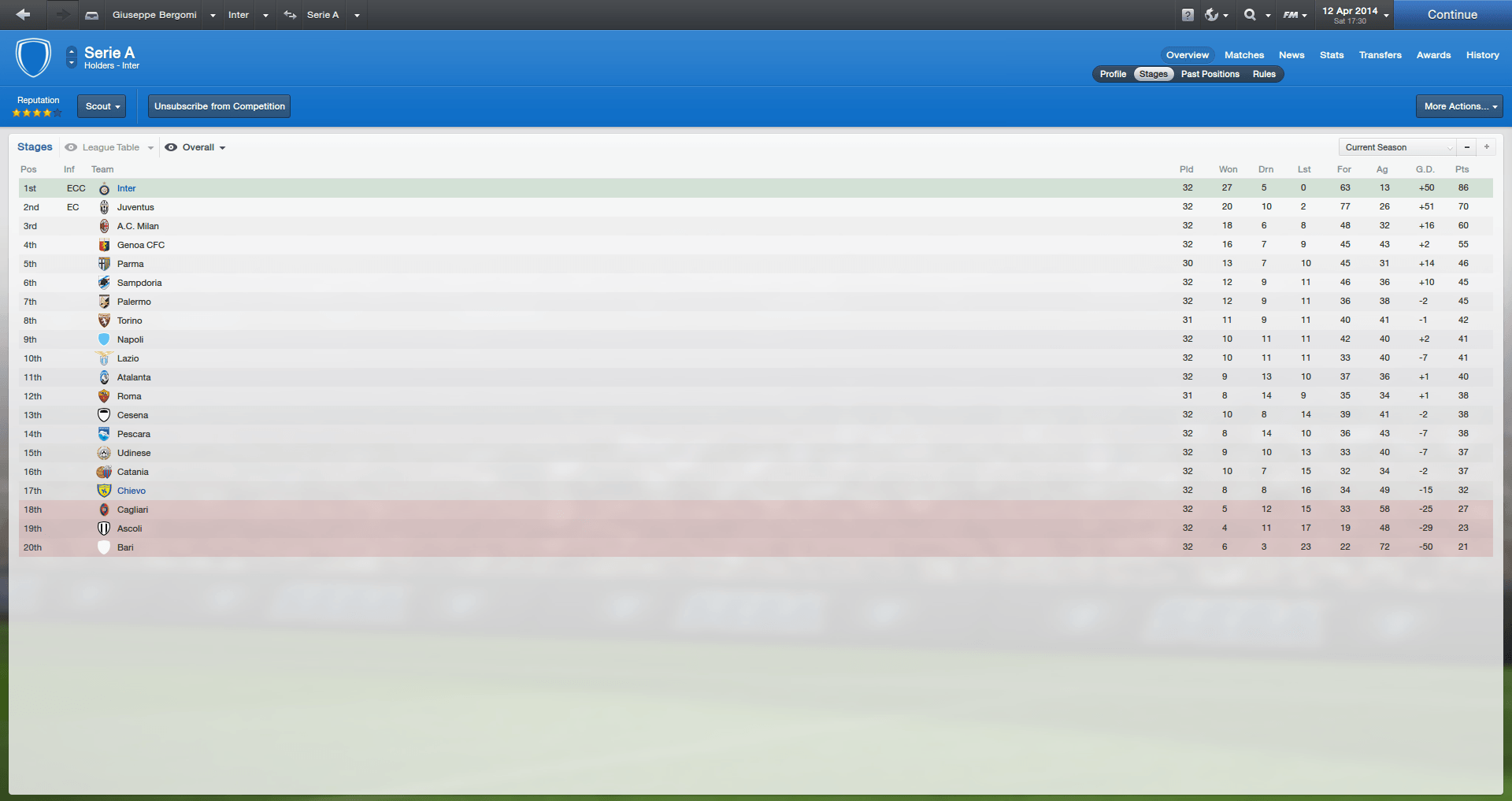 We are 16 points clear of Juventus with 6 games remaining! One more win and we wrap up the Serie A title with 5 points to go! I hope we can achieve this as soon as possible so we can focus on winning the Champions League. Our next game is against AC Milan, so what a way that would be to win the title! More than that, we achieved 70 games undefeated in Serie A with our win over Sampdoria! 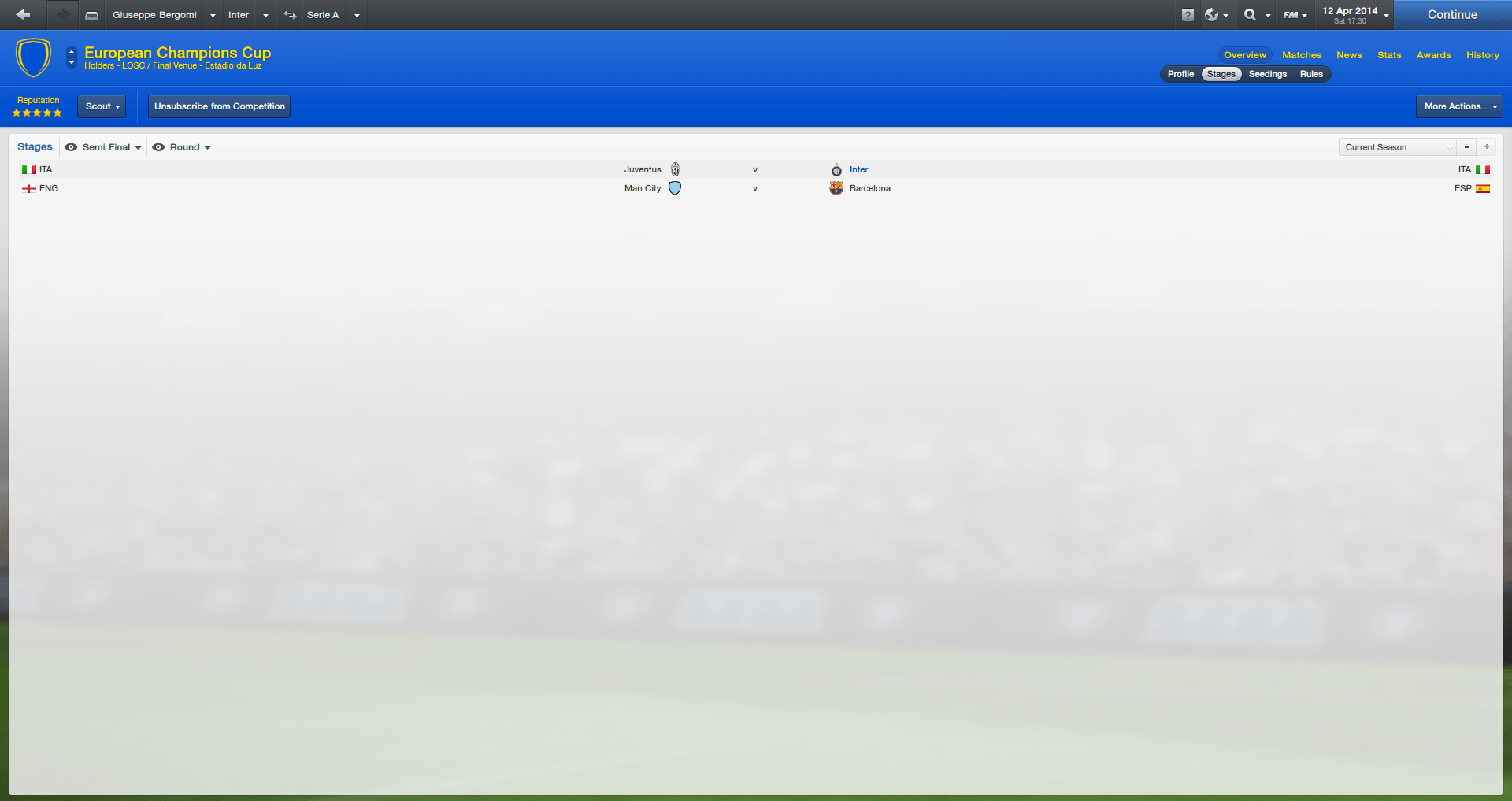 We've been drawn against our archrival Juventus in the semifinal. Based on previous results and our current run of from, we should be able to make it to the final against either Barca or Man City.

To be announced at the actual end of the month.

We've played great football for the beginning of this month. We thrashed Stoke in the quarterfinal and I think we have a realistic chance of winning the Champions League. We are also one win away from winning Serie A, and we've achieved 70 straight games undefeated in Serie A. Our next match is hosting AC Milan, hopefully we can clinch the title against our arch rivals and in front of our own fans!
Login to Quote