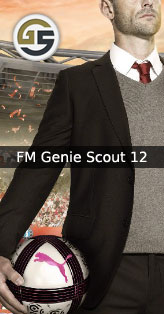 Welcome Genie Scout 12!
World's best scout utility is updated for Football Manager 2012.
Exclusively available from fmscout.com for yet another year :)

People who want to put Genie Scout 12 on other sites, you may link back to this very page but you cannot host any files yourselves. Thank you!

Does it work for Mac?
No, but Mac users check out Getting Genie Scout to work with Mac step by step guide by dane0 which was originally written for GS11, but should apply to GS12 as well.

That's it! No frameworks required.

NEW TO GENIE SCOUT?
Our good member Miguel wrote a detailed instructional guide to Genie Scout. Check it out!

Some languages are completely translated and updated, some others need updating, and we're always looking for new languages to be added.

LOCALIZE GS AND WIN :
People who will translate Genie Scout into a new language or update/complete currently available languages will get the "g" version without a donation.
Read more and declare your interest on this thread.

Donate to get the "g" version

Genie Scout 12 comes in two versions. One with ads and one with no ads (we will refer to it as the "g" version). In order to get the "no ads" one you'll have to donate to Eugene first, using the donation form on Genie homepage.

DELIVERY OF THE 'G' VERSION :
Eugene has automatized the process of distribution for the "g" version, so people will only have to wait up to 1 hour before they will get a download link and key this year. But only if they have sent correct contact email, correct Unique ID along with the donation. Make sure you check your Spam folder too.
If you don't send correct info, you'll most likely have to wait up to 2 days.

Apart from no ads, the "g" version has 4 extra features:

Please note that during the first run of "g" version it may take a few minutes to create the graphic packs cache. Next time it will be loaded much faster.

IMPORTANT :
FM Scout (the site) is not involved in the donations towards Eugene, neither has any responsibility delivering the ad-free version to you after donation. This is a process handled solely by Eugene himself.

This is a beta release, so it's natural that there will be some bugs we couldn't find while beta testing the scout ourselves.

Please find the corresponding version specific topic on our Genie Scout forum and post there!
Read this before submitting any bugs!
Any comment including bug report posted on this page will be removed on sight!

EXPORTING DATA :
Please understand it is forbidden by the EULA from SI and SEGA to export all the data from the results. You should be able to export only basic information such as player name, club, age, etc... the rest information belong to SI and SEGA.

Genie Scout 12 is created by Eugene Tarabanovsky.
He has been producing this program for the past 6 years now, and for that he is a true legend! Thanks mate!

v1.00 beta 2
All reported loading data errors have been fixed. Also it includes the following changes:

111 comments have been posted so far.