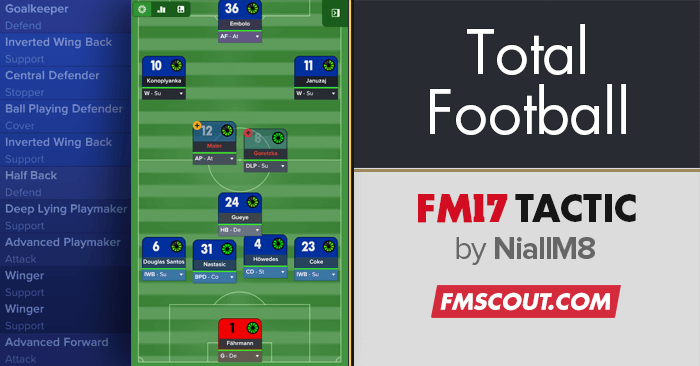 This tactic was designed to slightly replicate old Bayern Munich tactics in which the full backs would push forward and sit narrower and the defensive midfielder would drop back and become part of a back 3.


This is the basic defensive shape, the attacking shape ends up being essentially a 3-4-3 with the full-backs becoming the supporting central midfielders, the DLP being the spearhead of the three and the AP-Attack being the main creative outlet for the midfield.

The team instructions are based around a desire for a slow build up when in possession and a calmness when defending. It does however work really well on the counter, with the team shape changing so drastically from defence to attack, and the amount of players rushing forward, you will always find yourself with a lot of attacking options. 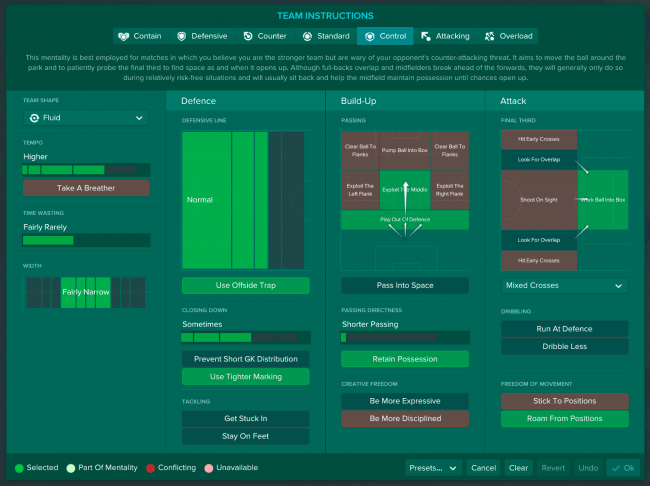 The narrow width is there to prevent the IWB's pushing to far out wide and leaving the DLP exposed to be overrun on the attack from the opposition.

The play out of defence instruction is there to quickly get the IWB's in possession as they will be the focal point for building attacks.

The higher tempo is in place in order to get the wingers involved as quickly as possible as they will be responsible for creating/scoring most of your chances and need to be as high up the pitch as they can be. It also prevents them from lingering around the halfway line and losing possession which would lead to an attack for the opposition.

Because this tactic calls for short passing and high tempo, there is not a lot of long ball distribution. So the work the ball into the box instruction helps to get the striker involved which was important for me because Embolo is one of the best players in the Schalke 04 squad.

The PI's are simple and are as follows:

Nearly all of the PI's are centered around shorter passing and roam from position. This is to partner with the fluidity of the tactic and make the players harder to track. By creating more movement within the tactic, more space gets created as defensive players get drawn out of position to close down.

Just thought I'd post this to see how anyone felt about it?
Please feel free to post any suggestions or feedback for the tactic. First post so be kind.