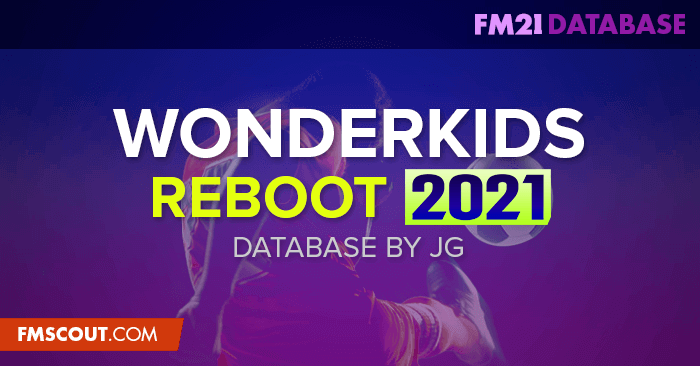 As promised, here is an FM21 version of my popular Wonderkids 2020 database from last year!


Due to external commitments, this year's database will likely not have as many players as last year. Not all players from last year are included yet, simply because then this file wouldn't be ready until in a month or two. The best and most popular wonderkids are included and ready to use.

This database will be a file simply adding young players into the game. Most will be U16 players, but the occasional player up to 23 may find their way in, if I feel they were unfairly left out of the base game. In the download, a facepack, and an excel sheet are also included, but more on that a little later

As you might imagine, it can be quite hard to find data on young players, especially in England. Therefore, while all players are recreated to the best of my abilities, there will almost certainly be errors here and there. However, if you're more knowledgeable than I, do feel free to leave a comment, and I'll correct it in the next update!

For the faces provided, I have named them so that ideally, they should load in like they have to. However, if you're like me, and play with a ton of database mods, they're almost definitly not going to match, as the other databases also add players, so the Unique ID's no longer match. So in order to fix this, you need to rename the files so they match the new Unique ID's. Luckily, a tool called Bulk Rename Utility exsist to make this easy. To determine what to name the files, find Youssoufa Moukoko in your game. His ID will be something like 2000067647. So to rename them, just follow it down, as such:

The order of the ID's will never change, so the order they're in now, is also the order they will be in afterwards. After renaming everything, use the fmXML tool to create a new config file. Then reload your skin in-game, and enjoy your new faces!

If the above instructions weren't enough, here is a video showing how to do it. If you still can't figure it out... I'm sorry mate, but I don't think I can help you anymore then.


This video is for FM20, but the process is EXACTLY the same, only the UID values change, and the starting player is no longer Shane Kluivert, it is Youssoufa Moukoko

Requests by you guys will be the lifeblood of this database update, so please do! However, I want to maintain a certain quality, so if I can't find an at least halfway-decent image of the players face, he will not be added. Therefore, when requesting, I want at least a name, club and position, and ideally a picture as well! Well, ideally as much info as you can possibly find really, but I'll take what I can get!