Thanks for commenting mate and maybe!


Champions League Semi Final
Chelsea 3-5 W (6-6) W - Needing a win of at least 3-0, it was going to always be tough. We was looking to be leading at half time thanks to Lewandowski however we gave them a penalty just before the whistle. And to be honest guys, I really have no idea what happened in the second half, both of us scored own goals, the score was bouncing around all over the place. Ronaldo got a brace and Pepe scored one too. This was complete chaos and I have to say this is one of the most random, lucky and best results I have possibly ever had! Could only have dreamed it!

To show a more clarification version of what happened, I have included the overview. Furthermore, we will be playing Manchester United in the final after they beat PSG 4-3. 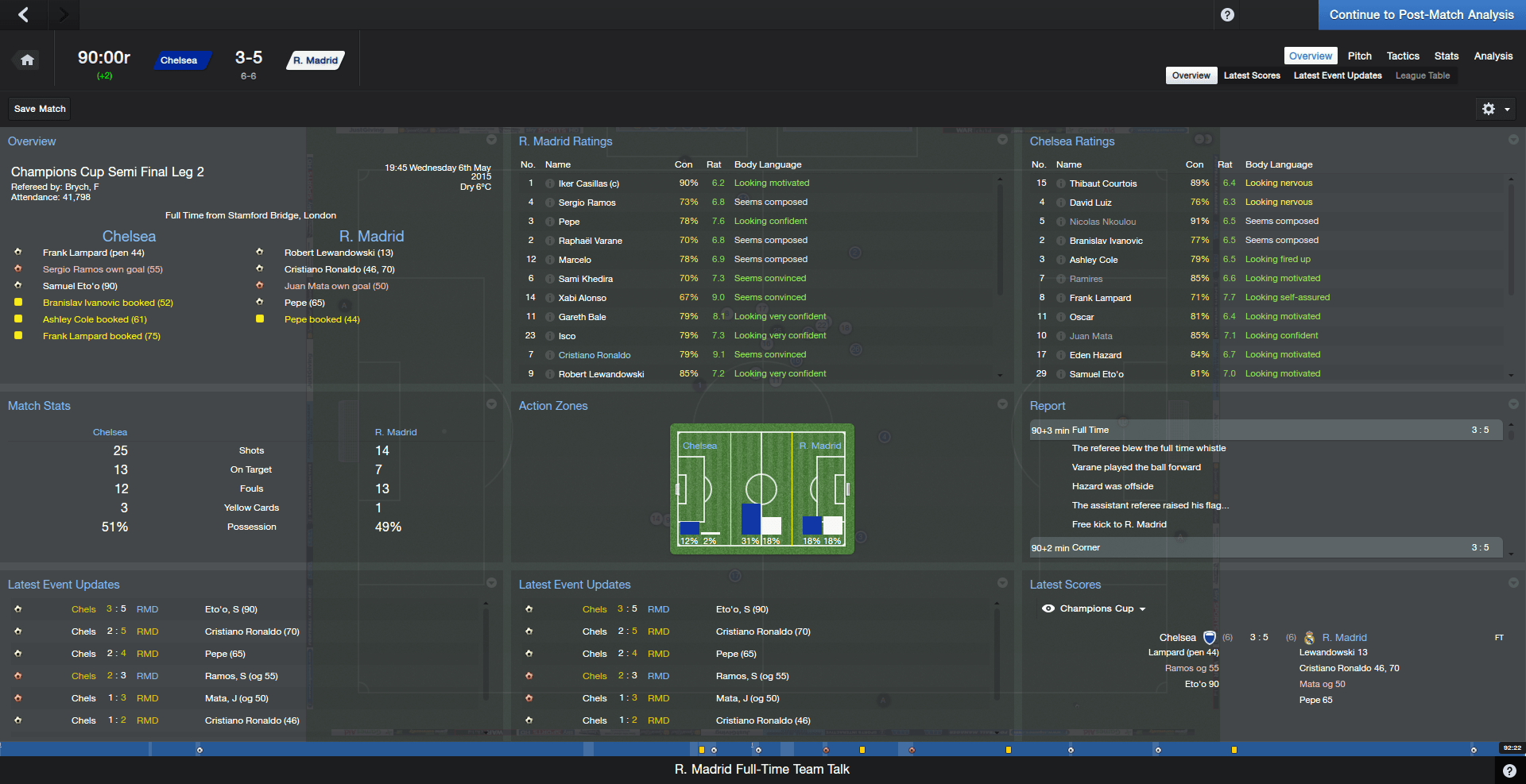 Spanish Cup Final
Barcelona - The only outing of the first eleven was Alonso because of him being suspended. As well as this, second choice Sahin was also suspended therefore, I started Modric. A very strong team went out to win the competition. Look at the image below to imagine it for yourselves. All I can say is I am disappointed obviously however, it was great entertainment and my heart never stopped. Also, my opinion on Pepe has dropped. 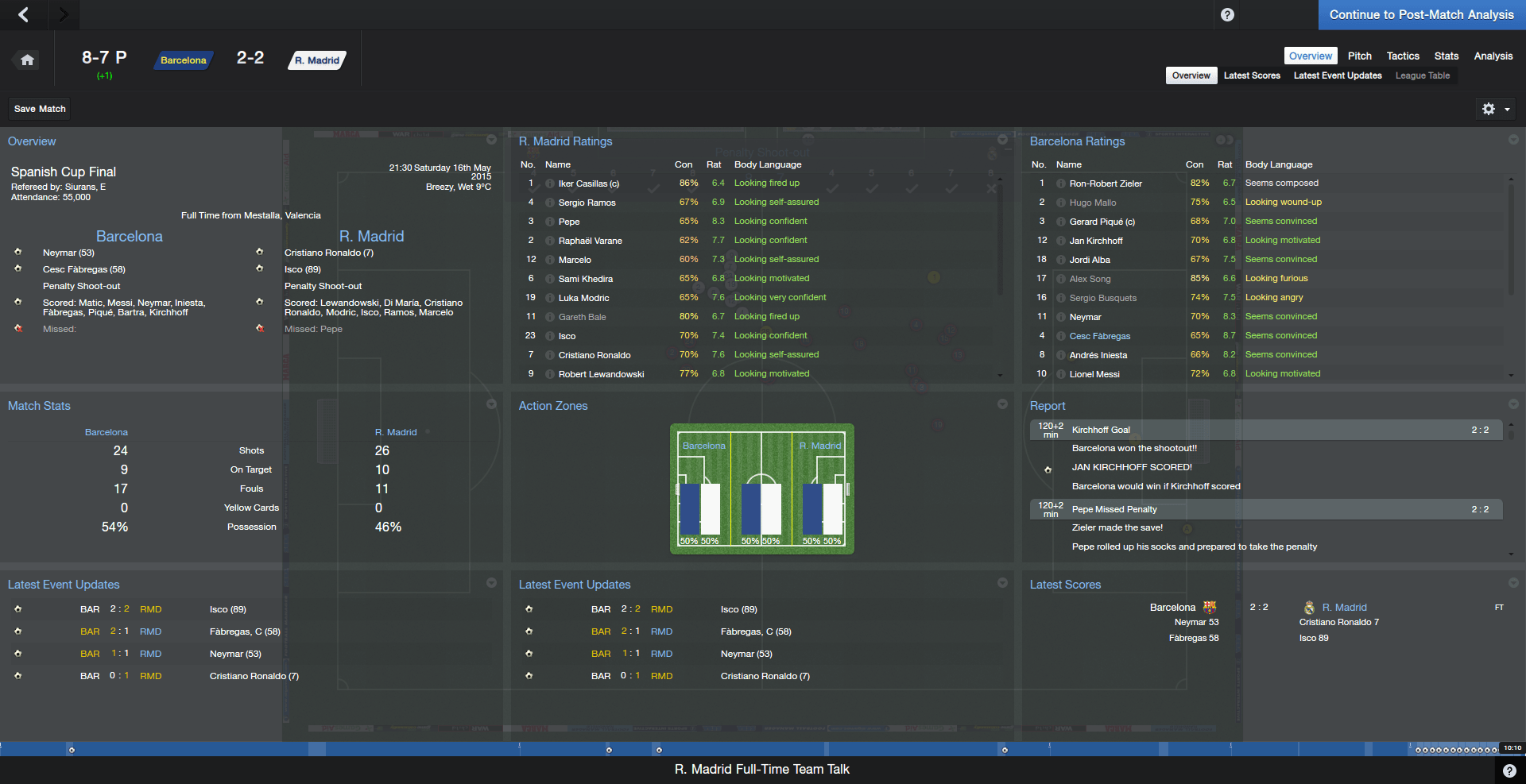 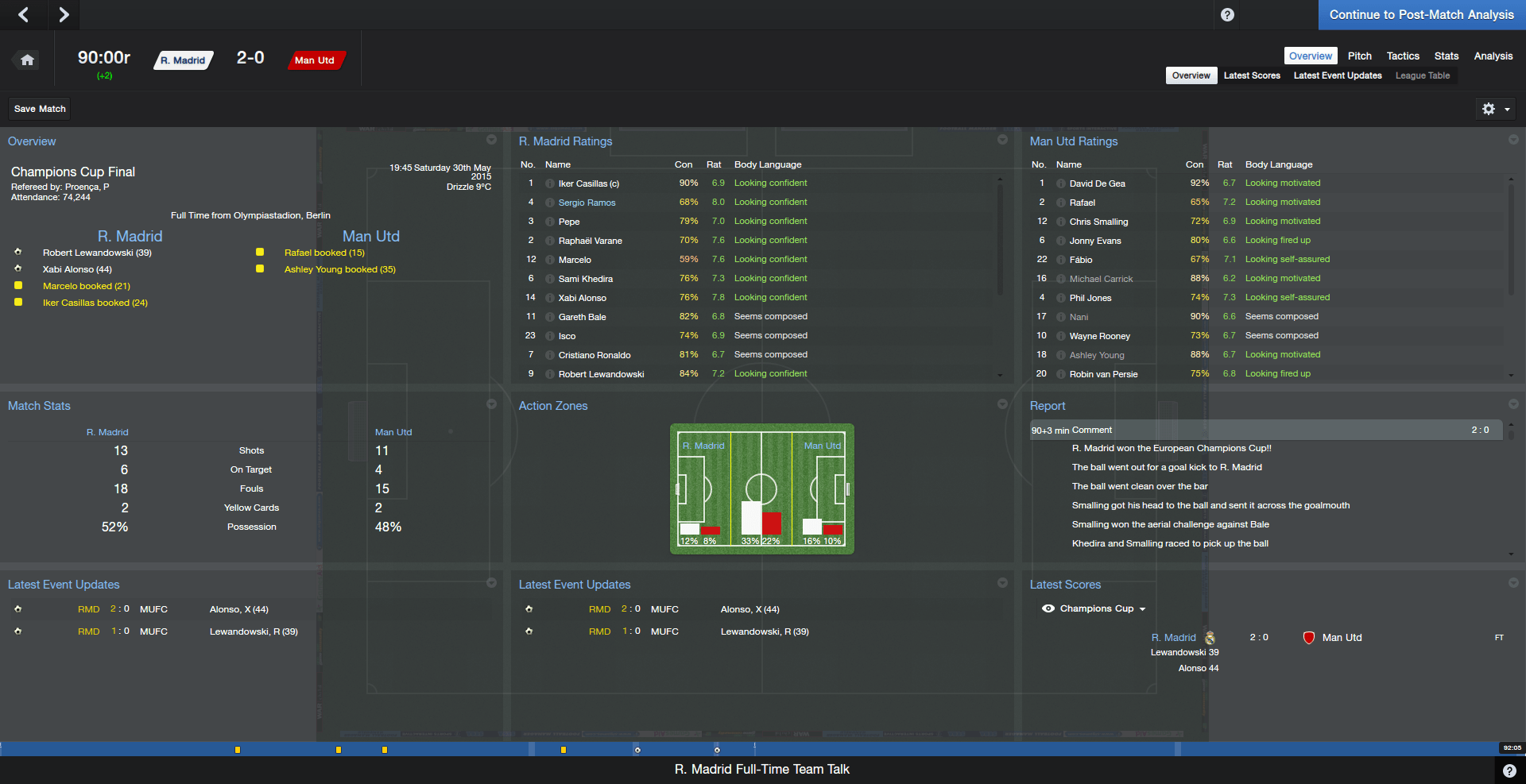 The next update will be a end of season review.
Login to Quote


Well I would summarise that as an amazing season. We won the league and the champions league, if we had just won the cup that would be the treble. Yes it would be amazing but the champions league is obviously the competition you most want to win. I really don't know what else to say without rambling on about nothing so I will just call the season amazing!

Key Players:
Pepe - His defensive side is one of the best in the world now, but 17 goals in 32 games (league) is amazing!
Alonso - He set up 16 goals in 16 games, simply essential.
Ronaldo - He either scores or assists at least once a game generally, Ronaldo standard.

Transfers Overview:
Lewandowski 5/10 - He has done alright, its just I was expecting a lot more. 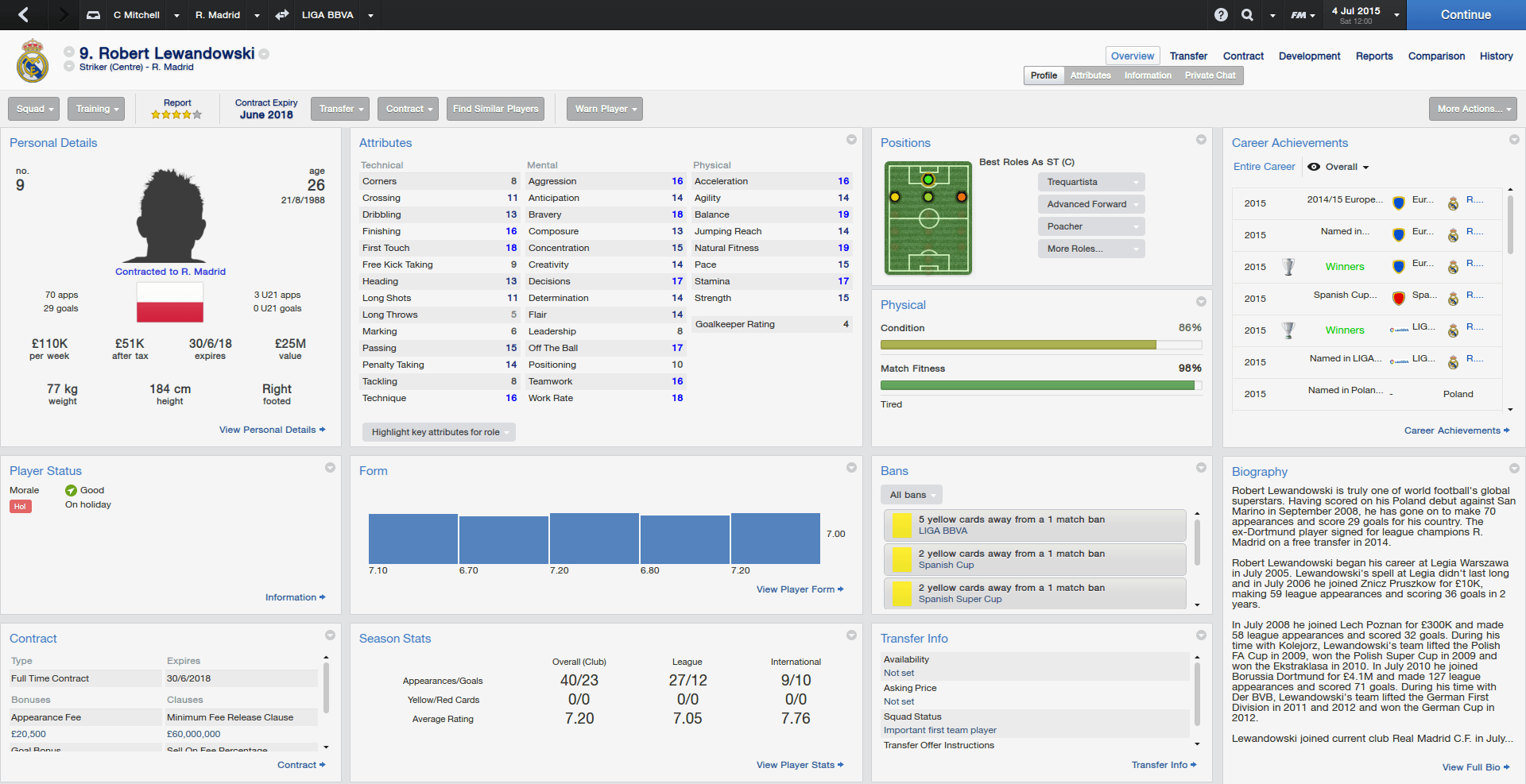 Digne 9/10 - He has been superb, I am planning him to play more next season. 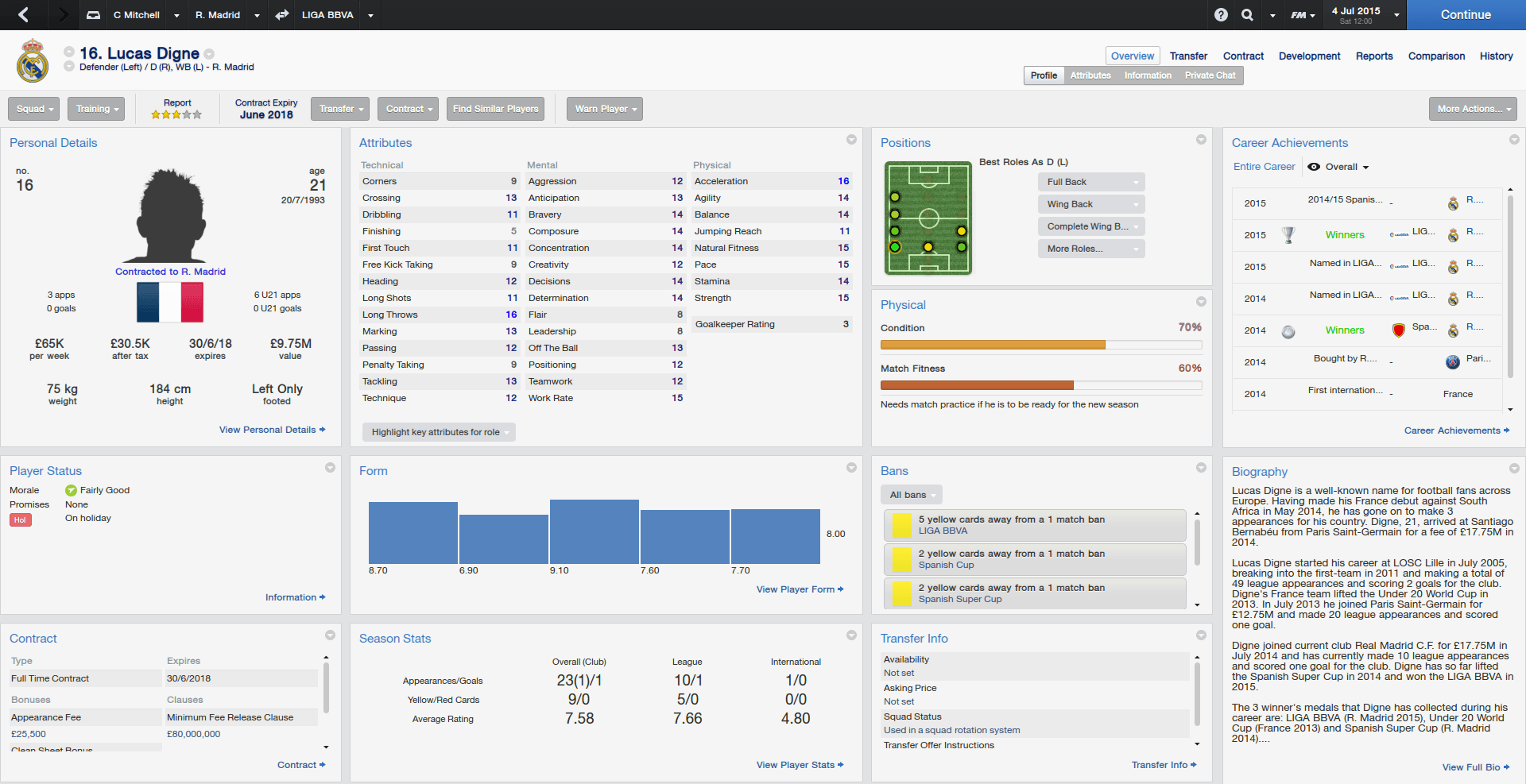 Markovic 8/10 - Very surprising, did not think I would have to think 'him or Isco?' 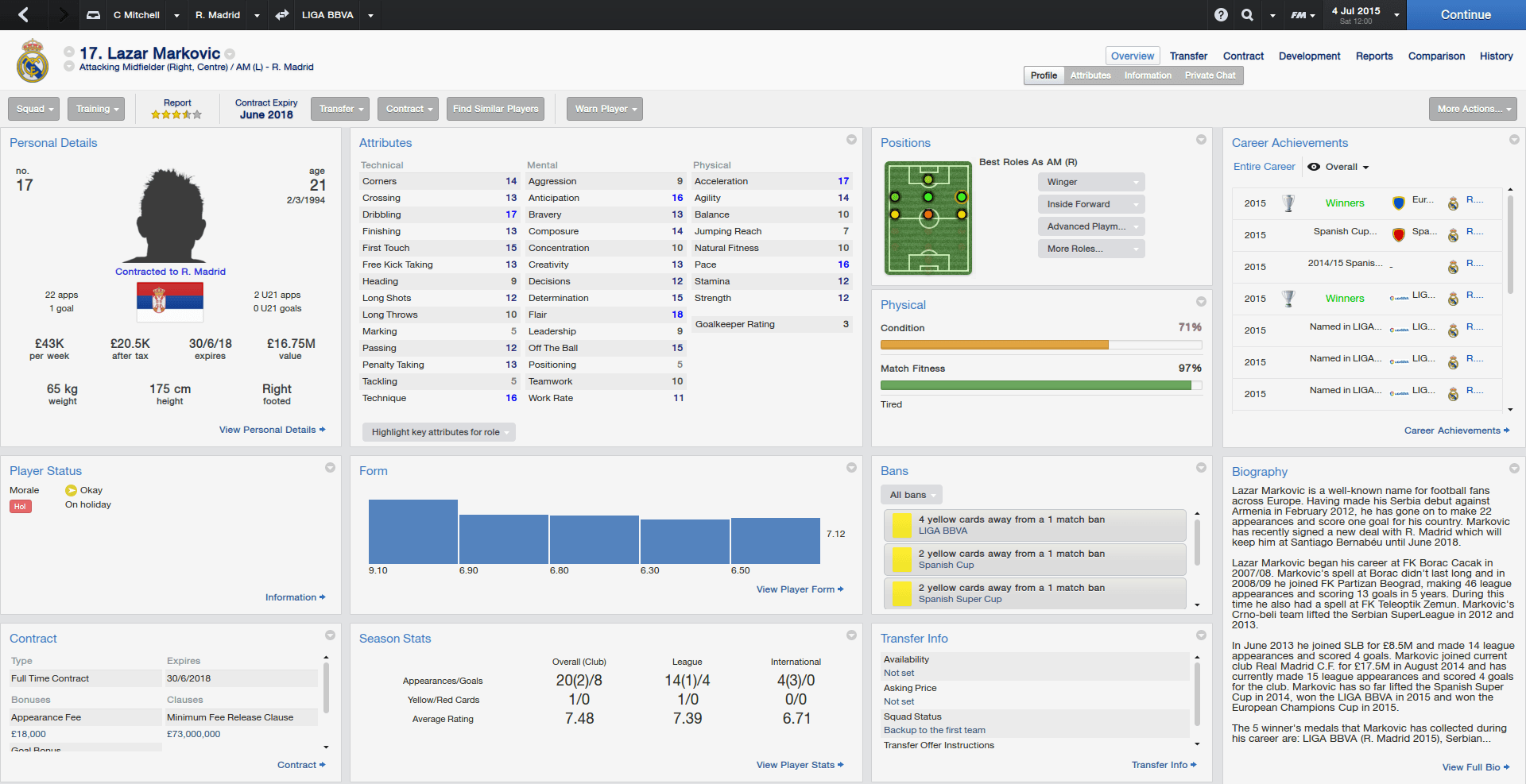 Lamela 5/10 - He has been so dissappointing. Really hoping he improves. A lot. 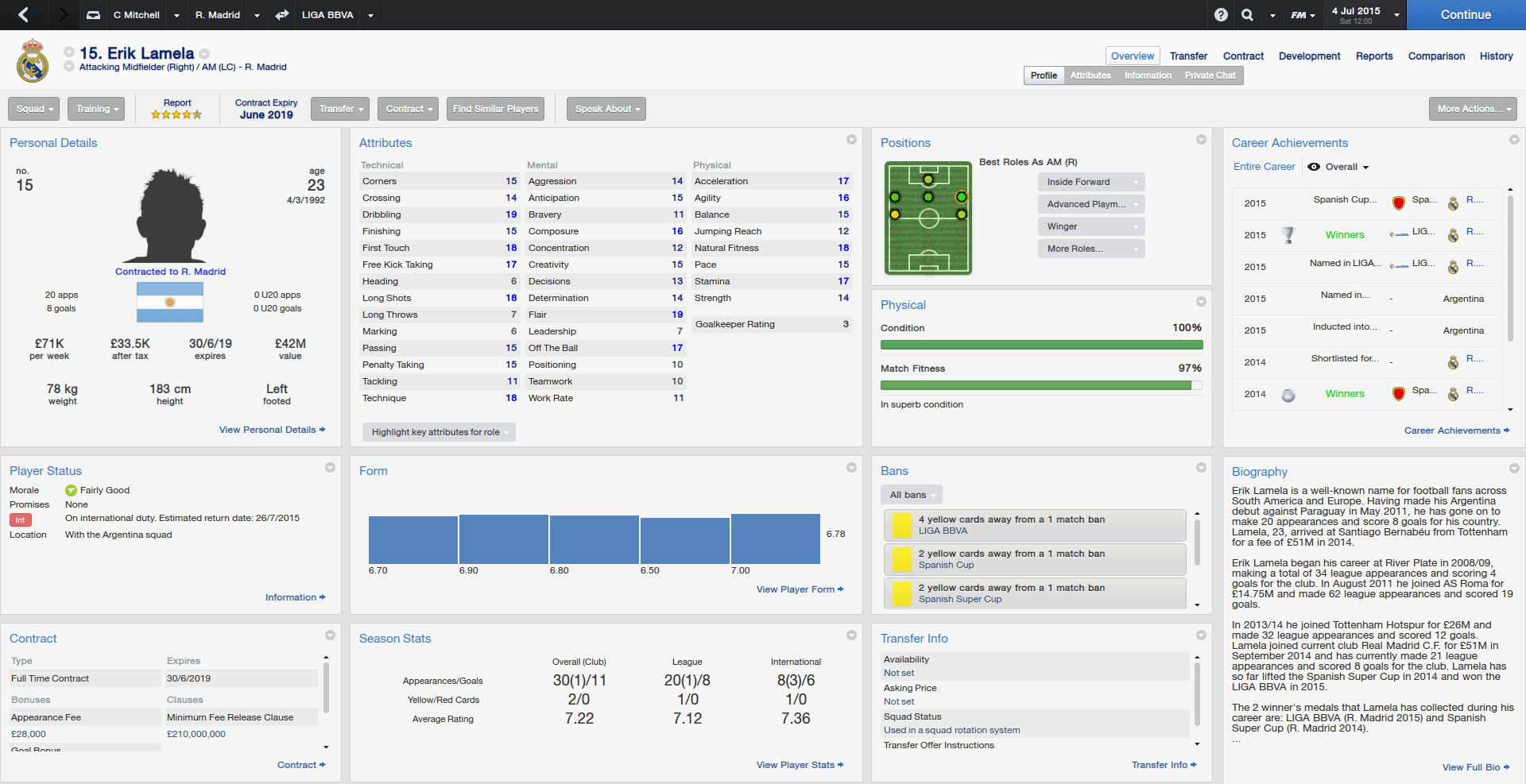 Stegen 4/10 - Played poorly in the games where he did get a chance. 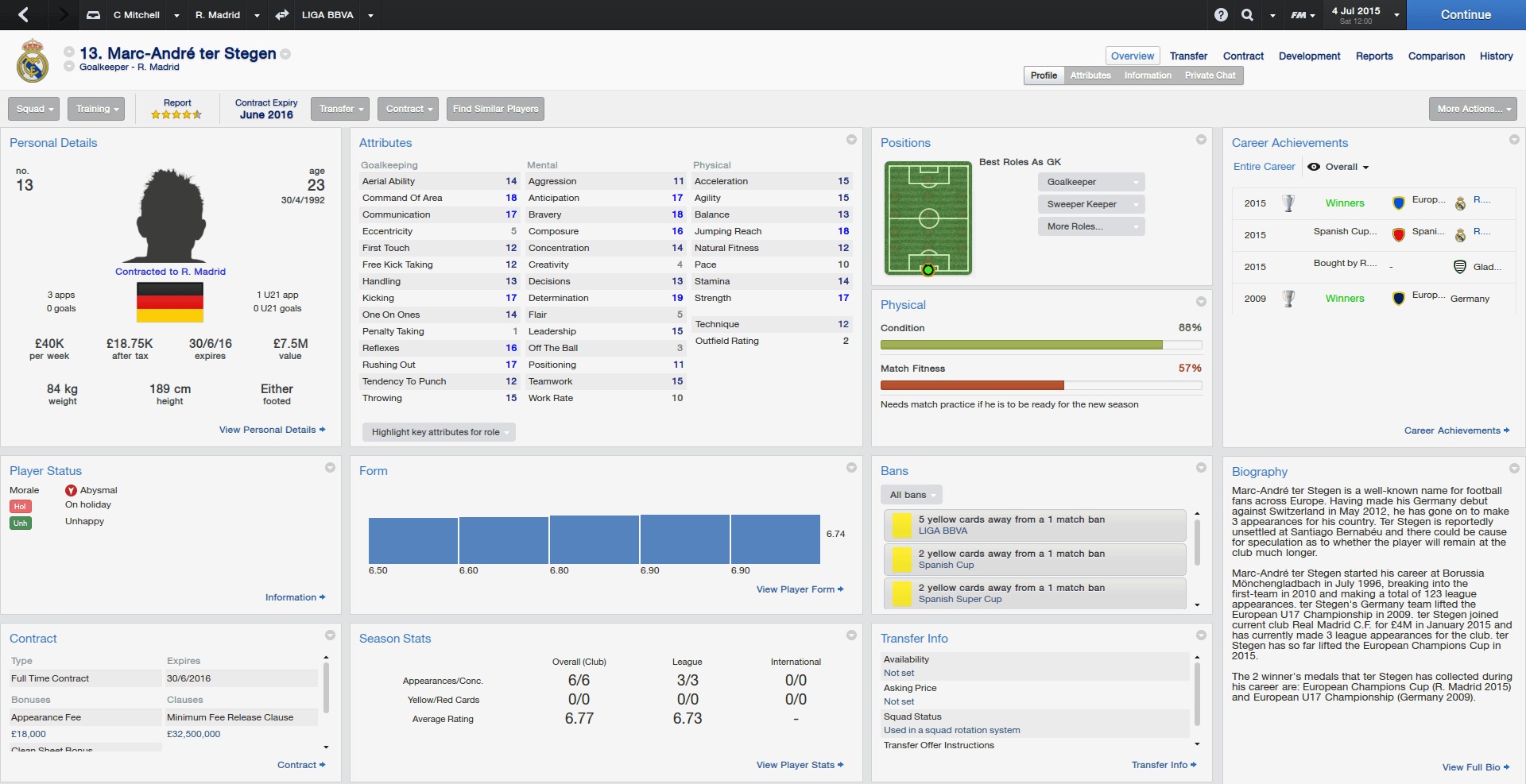 Sahin 8/10 - Has been so impressive since coming back from loan and I will be keeping him!

Transfer Plans:
Coming in: Being European champions and having a budget of £179M (!!!) I guess I could nearly sign anyone. However, I am planning on starting the youth 'revolution' so I wont be spending big... likely. I will be looking at young players below the age of 21. Position wise, not too sure, probably whoever turns up on that scouting list, position might not play a major part.
Going out:The only player I will be looking to get rid of is Modric. He is very very good but he doesn't get into the team with Alonso playing there. Furthermore, Sahin creates more chances unlike Modric who scores more often.

Youth Development:
Well most of the players in the U19 side that look decent with high potential are 16. This is far too young for my liking if I was going to promote them to the first team. The only player I have decided to call up is Jaime. Hes decent, not much more but with the lack of defenders I have, he might just get a chance and just might impress. If I am honest, I can't see him ever getting much further than being a squad rotation. Furthermore, I hope that Sanabria will get better and better. Because of the lack of called up players, I will looking to sign some younger players that can maybe come straight into the first team or perhaps I will send them out on loan or allow to develop in the U19 side. We will see! 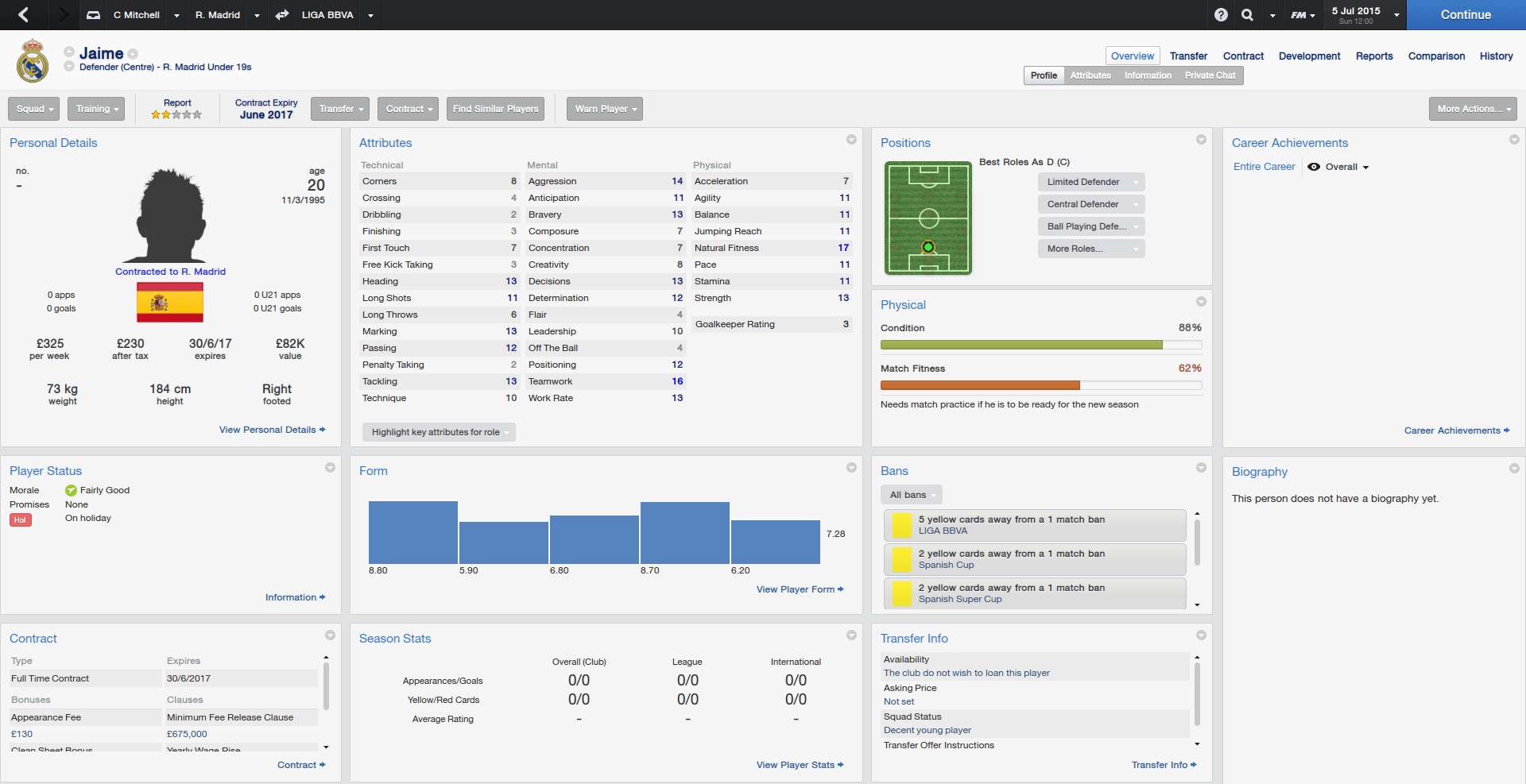 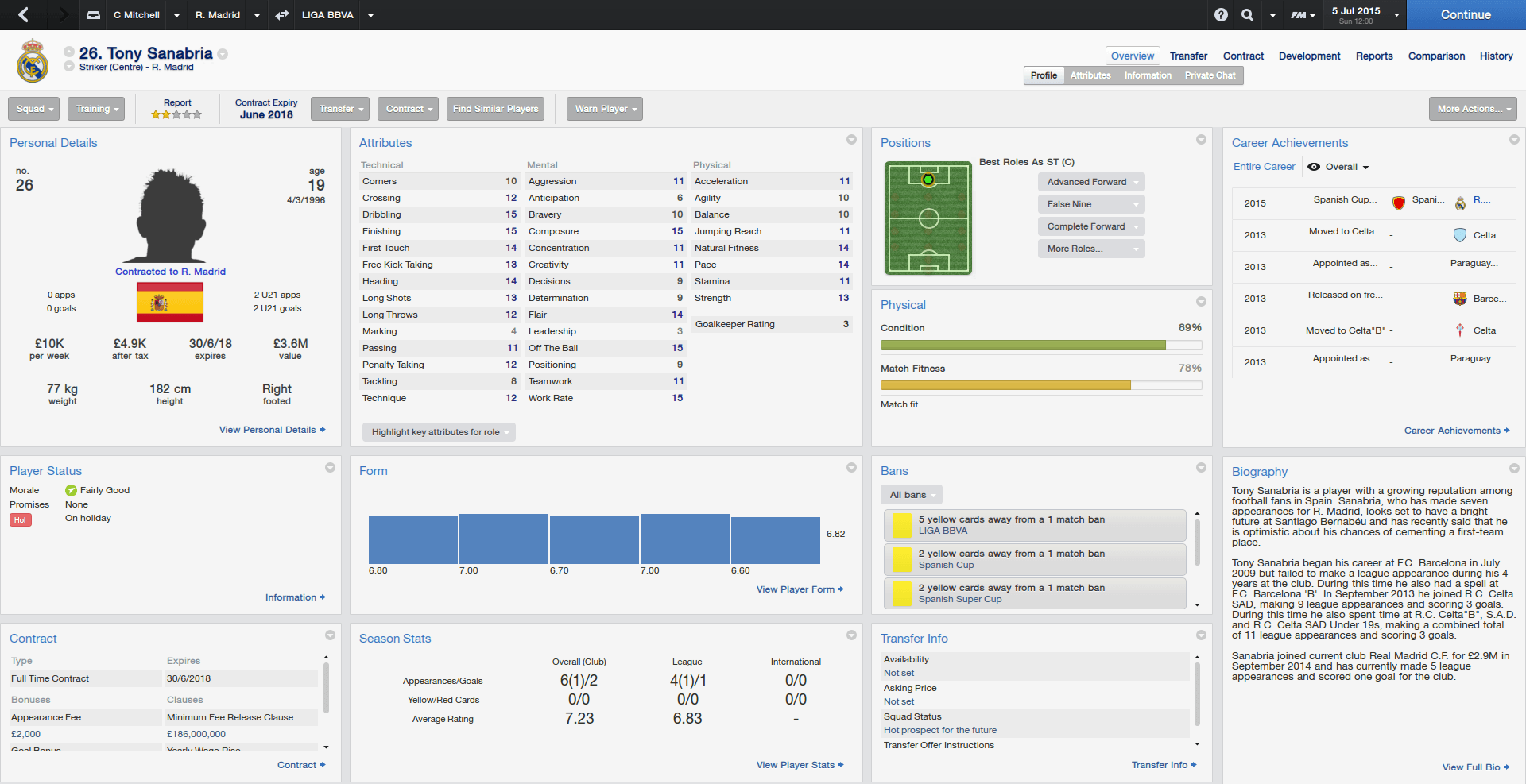 Targets:
The only way I can improve this season cup wise is to win the Spanish Cup. However there are other possibilities such as going unbeaten or have a higher point gap between us and second place. Its so hard to retain your champions status but I think we can. I am hoping to have a nice balance of youth and experience too.
Login to Quote

Ferginho
8 years
Hey. can u show your team instructions and your player instruction.? I would like to use your tactic

Sorry to say mate but this isn't the place to be posting this kind of stuff, the writer hasn't been on for months and it's pointless bringing back an old thread, and for the wrong purpose, too. If you'd like you can start your own story, then you can keep on telling us about your career on the Manager Stories forum