ROMA WIN 3 IN A ROW IN SERIE A

There’s not much time left in the Serie A season, and now it is clutch time for every club hunting for the title. The Scudetto race is as tight as it has ever been this season; AS Roma leads the pack, but AC Milan and Juventus are not far behind, and each is desperate to win the famous trophy.

Roma are of course preparing for the second edition of the Derby della Capitale at the end of March, the first leg having finished 1-1 after a thrilling match in Rome. Before that eternal rivalry game, however, the Giallorossi had three matches to play through to look to solidify and fortify their spot atop the league standings.

The first of these games took place at the Stadio Olimpico where Roma hosted mid-table side Parma, expecting a relatively simple victory. At halftime, it seemed as though the capital city side would achieve just that. Francesco Totti had opened the scoring early from the spot before Pjanic doubled the lead a quarter of an hour in. Michael Bradley made it 3 on the half hour mark with a thumping header, and the Giallorossi were cruising.

In the second half, however, things went haywire. Ex-Roma striker Antonio Cassano clawed one back for Parma with a long range hit just 5 minutes after the break. The Crociati continued to press forward and with only 9 minutes to go Amauri scored a towering header to bring his side within just one goal. Totti’s men finally set up shop and managed to hold on to their dramatic victory, 3-2 the final score.

Cagliari was up next, and they put up quite the fight at the Stadio Sant’Elia. Roma struggled to impose themselves on the game until the hour mark when Cagliari was reduced to 10 men; Luca Rossettini was shown his second yellow card. From there the capital side was by far in the ascendency and Daniele De Rossi then scored the game winner with 15 minutes to go from a Francesco Totti corner, a combination of two AS Roma legends.

The last match before the infamous Derby della Capitale saw the Giallorossi return to the Olimpico to welcome Genoa. The Rossoblu sit in 20th place and were expected to be beaten heavily; Roma duly obliged quickly. Just 4 minutes into the match, Miralem Pjanic was laid in by Adem Ljajic and scored an easy first goal to make it 1-0.

Ljajic then took complete control. Genoa’s defense could not handle the Serbian’s delightful dribbling and guileful runs and the ex-Fiorentina attacker doubled Roma’s advantage directly before halftime. Ljajic then scored in the 59th and 60th minutes to complete a quickfire hattrick and make the score 4-0 before chipping the Rossoblu goalkeeper in the 83rd for his fourth goal. An injury time volley from Gilardino gave Genoa some consolation as they fell 5-1.

Francesco Totti has turned provider alongside manager for these matches, opening the scoring against Parma and assisting four other goals, proving he is still cut out to play at the top level.

“What a great way to prepare for the derby,” said an enthusiastic Totti after the Genoa thrashing. “The attack is feeling very confident and the whole team is a single unit right now. The next match transcends just us players, though; we want to beat Lazio for the fans.”

Those fans only have to wait one more week until Roma takes on Lazio at the Stadio Olimpico in what is officially a home fixture for the Biancocelesti. Francesco Totti’s side have gotten further clear in Serie A and now sit 5 points over second placed Milan and 7 over reigning champions Juventus. The full table is as follows: 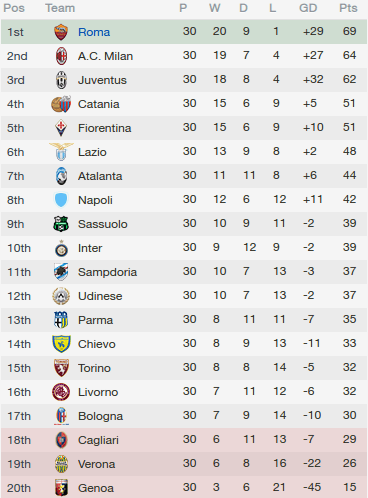 Trop
7 years
Wow, Ljajic is on fire! But Juve still have a better GD than you

Neal
7 years
Trop: Yeah Ljajic was incredible in that game! And it's a good thing I'm 7 points ahead then

AaronJHFT96: Haha thanks (twice), it is a good point total

P-KIDDY: Yes it's close but we are starting to pull away, and yeah Ljajic came up HUGE that game

In what was otherwise a very quiet youth intake day for AS Roma, one player in particular stood out to Francesco Totti and was signed immediately. His name was Valerio Di Stefano. The 15 year old striker is considered to be the superstar of tomorrow.

Valerio came up through the youth system at Sassuolo, where he played since the age of 11. He was noticed just a few days ago by Totti when Sassuolo’s U16 trialist side defeated their U20 side 6-5 where an inspired Di Stefano scored 4 goals. Roma Chief Scout Frederic Massara was quick to show Totti footage of the youngster and the Giallorossi manager was quick to offer the striker a contract before he signed terms with Sassuolo.

The teenage Italian sensation is known for being a goal poacher supreme for such a young player. Valerio’s finishing, dribbling, and first touch are already comparable to world class players and his composure in front of goal is outstanding. The Sassuolo youth is also very determined and ready to work for his team when needed.

“My heart lies with Sassuolo, and I will always love the Neroverdi, but when you get an offer from Francesco Totti you can’t say no,” said the ecstatic teen during his first ever interview. “Totti is the kind of player I grew up watching and admiring, and to learn from him will be a dream come true. I cannot wait to don the colors of Roma.”

Bruno Conti, Head of Youth Development at AS Roma, has worked with Di Stefano on a couple of occasions and helped to negotiate his move to the capital, said this of the youngster. “I think Valerio could become one of the best poachers Italy has seen since Pippo Inzaghi. We are very optimistic to see the way he will develop.”

Di Stefano will continue to train with Sassuolo for the season before completing his official move to Roma this summer. 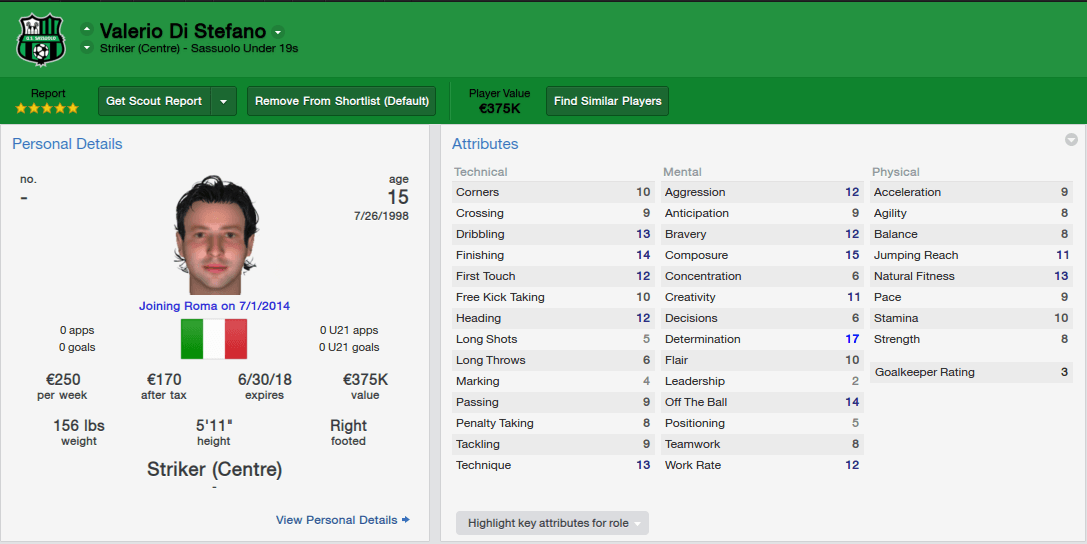 Zap
7 years
Whay a good looking prospect you have bagged yourself there, jealousness. Kicking. In.
Login to Quote

I love a good neal story.

k1rups
7 years
Good regen there! And of course flying at the top

Neal
7 years
Thanks you guys, he looks a big talent, can't wait to see him develop 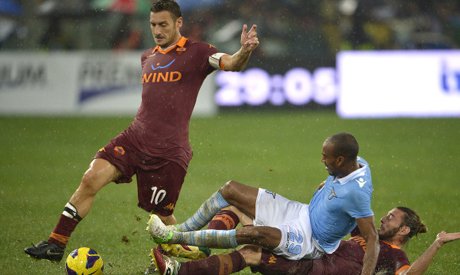 The Derby della Capitale between AS Roma and SS Lazio is doubtlessly one of the most heated rivalries in all of Italy. These two of the nation’s most storied clubs faced off yesterday to see which one was the greatest club in the city of Rome, and it was an inspired match indeed.

Earlier in the season, Roma had “hosted” Lazio at the Olimpico (the stadium the two sides share) and that match had resulted in a hard-fought 1-1 draw that included goals, controversy, and a red card. The fans could do nothing but pray that this rematch in Rome would be just as eventful and full of passion.

There was a bit of a war of words between the match between the two managers, only adding to the heated anticipation. Lazio boss Vladimir Petkovic claimed his opposite number Francesco Totti was a “plastic boss”, going on to say, “Totti hardly has any clue what he’s doing, in my opinion. They’ve been quite lucky all season, and we plan to bring them back to earth.”

Totti refused to criticize Petkovic, instead replying, “At this club we are above that. We let our performances do the talking.”

The match itself started in a quite underwhelming fashion. It was mainly a midfield battle between the four central midfield players of Roma against the five across midfield of the Biancocelesti. Neither side could command possession nor create clear cut chances to goal. The Giallorossi’s top scorer Adem Ljajic was quiet throughout.

At halftime, Totti made the key switch, taking off his Serbian star and putting on Italian striker Mattia Destro. The energetic 23 year old had suffered a very poor season thus far; little did he know that he would be the deciding factor of the biggest rivalry he’d played in to date.

Three minutes after coming on, Destro scored. Francesco Totti had drifted into space on the left and quickly nutmegged Luis Pedro Cavanda to find himself in great space. The legendary captain then picked out Mattia Destro in the box who easily turned past Diego Noveretti and slotted home a finish at the near post past Marchetti. Half of the Stadio Olimpico burst into wild celebrations.

Lazio began to push forward more after that but the Biancocelesti playmakers such as Hernanes could not find a way through De Rossi and Bradley. The two industrious midfielders were marshalling the defensive duties of the team and kept Lazio out of their box for nearly their entire game.

In the last two minutes, the entire game nearly turned on its head. Mattia Destro nearly doubled his tally and his club’s lead but saw his swerving and dipping shot crashed off of the crossbar. Moments later, Lazio counterattacked with lightning speed through Candreva on the left flank. The Italian winger sent in an inch-perfect cross to Albin Ekdal, whose header struck the post and rolled out.

The final whistle blew, and Roma had triumphed in the eternal derby by a score of 1-0.

“This victory is for all of our fans,” said Totti after the match. “There is no better feeling than getting one over your biggest rivals. I think Petkovic has learned an important lesson today, as well, and I don’t expect to hear much more than whimpering from his camp.”

Following the derby, Roma now sit 5 points clear of AC Milan in second place and a further 2 ahead of reigning champions Juventus. Rivals Lazio, licking its wounds after that match, sit in sixth place, 24 points off of the lead.

Verdinho
7 years
A blessed substitution! I love it when tactical changes work out