NO TOTTI, NO DE ROSSI, NO PARTY? 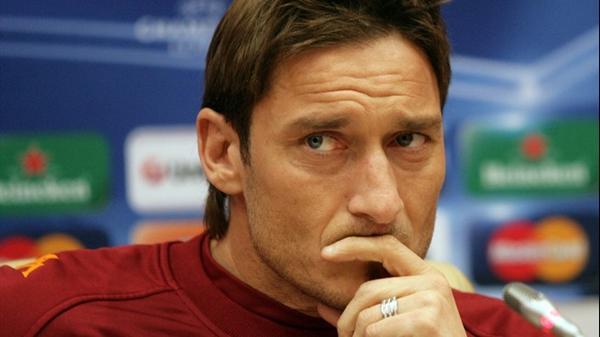 In what will come as a huge blow to AS Roma’s chances in their upcoming clash against fellow title contenders AS Milan, Francesco Totti and Daniele De Rossi have both been ruled out due to injuries. The captain and vice-captain are the legendary leaders of Rome and their absences will surely be a big advantage for the Rossoneri.

Totti had picked up his injury against Chievo Verona where he had gone down late on clutching his ankle. It was later revealed that ‘Il Gladiatore’ had twisted his ankle badly and would miss over a month of football. The player-manager of Roma has enjoyed a sparkling season, scoring 10 goals and racking up 11 assists throughout the season.

On form Mattia Destro is expected to take Totti’s place in the XI after scoring four goals in his last three games and will likely be partnered with the Giallorossi’s top scorer, Adem Ljajic. Some pundits are suggesting that Totti may select Gervinho instead and play with no recognized striker, moving the Ivorian to one wing and Ljajic to another.

To make matters even worse, Daniele De Rossi will also miss the top of the table clash. The vice-captain and natural born leader sustained a bruised rib in training and is set to miss at least a week of football, certainly ruling him out of the Rossoneri clash. De Rossi has also enjoyed a stellar season, pitching in 3 goals along with some top notch performances.

Industrious midfielder Michael Bradley is expected to take up the holding midfield role, as he is the only natural heir to that position. The American international was the subject of a long, arduous courtship from Manchester United, only to ultimately stay on at Roma and have a big impact in central midfield. Bradley is held in very high esteem among both Francesco Totti and James Pallotta and will likely wear the armband in Totti and De Rossi’s steads.

AC Milan manager was quick to point out these two glaring losses in his pre-match press conference, quipping, “No Totti? No De Rossi? Roma hardly have a team otherwise. We can’t wait to put a serious dent in Roma’s title race and bring ourselves back into the hunt.”

Francesco Totti, however, was surprisingly confident. “There is a lot more to this team than just Daniele and I. Of course, we are both veterans at AS Roma, and we always look to lead the team, but we have leaders and talented players that will be on the pitch come match day. The lads are ready to go out and show Milan who is the true champion of Italy this year.”

shylax
7 years
Every good team has to overcome injuries. Show AC Milan how foolish they are!
Login to Quote

Verdinho
7 years
Of all the players to get injured! Thankfully De Rossi will only miss the Milan game. Nice update

pompeyblue
7 years
Unlucky about the injuries but I am still confident you can win!
Login to Quote

Neal
7 years
pompeyblue: It'll be tough but hopefully we can do it!

NO TOTTI, NO DE ROSSI, NO PROBLEM 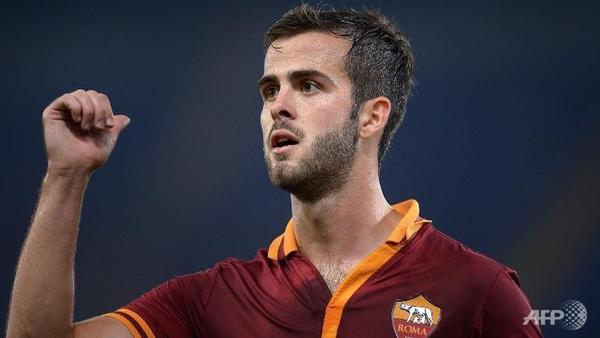 Lacking undoubtedly the two greatest players of their generation, their captain and vice-captain, AS Roma have pulled off one of the most surprising results of the season in absolutely hiding fellow title contenders AC Milan by score of 3-1. Miralem Pjanic led the way for the Giallorossi with a brilliant match, racking up a goal and an assist.

Just two minutes into the match, Roma took the lead. Mexes had gone in poorly on Adem Ljajic just outside the area and Miralem Pjanic stepped up confidently to take the kick. The Bosnian international struck the ball perfectly, having it dip over the wall and nestle into the top corner, well out of the reach of Christian Abbiati.

Roma continued to control the run of play in front of the sold out Stadio Olimpico; they hardly seemed to be missing Totti and De Rossi. In fact, Totti was dressed in suit and tie in a full manager’s capacity on the sideline with De Rossi and the ever-present Aurelio Andreazzoli right beside him, urging his team on at every possible moment.

Nearly twenty minutes in, Roma nearly doubled their advantage. Pjanic was again the architect, whipping in a delightful delivery from a corner kick. Mehdi Benatia rose toweringly to meet it but saw his header acrobatically saved by Abbiati. The ball then struck the crossbar and nearly bounced in had Ignazio Abate not frantically cleared the ball off the line, but only for another corner. This time, Roma made them pay.

Pjanic went across to the other flag to deliver a second corner, this time to the near post. Again it was Benatia there to meet it and the surprisingly unmarked defender turned and poked home a timid finish at the near post, right under Abbiati’s arms. We weren’t a quarter of the way into the match and the Giallorossi were absolutely cruising.

Pjanic was at the heart of the third goal as well, which came on the hour mark. The creative midfielder slipped in Adem Ljajic but the Serbian was shoved down by Philippe Mexes and a penalty was awarded, though not without great argument and controversy. Ljajic himself stepped up to take it and coolly slotted home to make Roma’s lead 3-0.

At last the Rossoneri sprung to life, as if now that they were down 3-0 was a wakeup call. A beleaguered Max Allegri on the touchline was shouting his head off as Milan prepared for the kick off, and evidently the players took it to heart. Ignazio Abate burst down the right flank and thundered in a cross soon after the restart. Morgan De Sanctis came to collect but was caught horribly out of position allowing Alessandro Matri an easy poke home on an empty net and pull one back.

Things cooled down significantly in the second half. AS Roma played less direct and less attacking, instead focusing more on keeping the ball and wearing down Milan. However, Allegri’s men were having none of it and pressed hard and high. Though they won the ball on rare occasion, they were certainly a threat when they did.

With seven minutes to go, Matri nearly brought the game to within one goal. Brazilian flop Robinho put in a pass to the Italian striker who then drifted past Dodo and turned toward goal. His first shot was denied expertly by De Sanctis, but Matri thought quickly and looked to chip the prone goalkeeper when the rebound came back to him. Astoundingly, however, De Sanctis leapt back to his feet to stuff Matri once again.

At last, at long last, the referee blew the final whistle, and Roma had triumphed emphatically. The Olimpico was celebrating raucously; their team was now so close to the title. Now 11 points over second placed Juve, a win in their next match against Bologna would see them mathematically secure the Scudetto.

Francesco Totti told the press after the game just one thing: “We are ready to win this title.”

Mexes with a small help for his former team

Neal
7 years
pompeyblue: Cheers mate, this could be the one that seals the title for us! 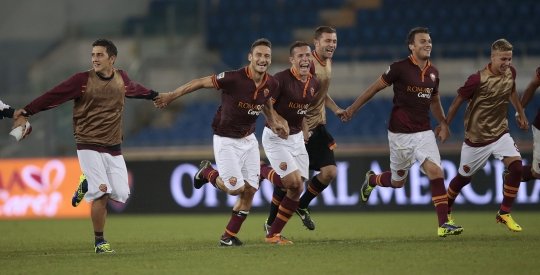 When the season began, almost everybody expected Juventus to be favorites to defend their Serie A crown for the third consecutive year. Rafa Benitez’s new-look Napoli was also considered a contender, along with perennial powerhouse AC Milan. Some even thought that Inter Milan would be rejuvenated enough by Walter Mazzarri to make a bid for the throne. Francesco Totti’s Roma revolution, however, slipped under the radar, but now they have proved everybody wrong.

With three games to spare, AS Roma have mathematically secured the Scudetto, their first Serie A victory in 13 years in emphatic style, crushing relegation candidates Bologna 5-2. This is the Giallorossi’s fourth ever Scudetto triumph ending a decade of second place finishes (’02, ’04, ’06, ’07, ’08) and player-manager Francesco Totti’s first trophy in a managerial capacity.

The Stadio Renato Dell’Ara was very tense before the game as Bologna were in dire condition and looked set to drop into Serie B unless they could pick up some points in these final few games. Unfortunately for them, high-flying Roma was the first side they would have to face in their quest for survival.

The Rossoblu defended very well through the opening twenty five minutes and nearly took the lead through a Gyorgy Garics header, only for the goal to be disallowed due to offside. Half an hour of the match rolled along, and then finally the goals began to flow like an unleashed river hidden behind a dam for many years.

Leandro Castan broke the deadlock with a powerful header off of a Miralem Pjanic corner kick almost exactly on the hour mark. The goal seemed to take the wind out of Bologna’s sails somewhat. Two minutes later, Maicon clipped a ball in toward Gervinho. The Ivorian striker, on the top right corner of the box, let the ball drift over his shoulder and swung at it on the full volley, connecting perfectly and drilling the ball into the bottom corner to double Roma’s advantage.

Against the run of play another four minutes later, Stefano Pioli’s men clawed one back. Luca Belingheri had found space down the left and put in a dangerous cross. Center backs Mehdi Benatia and Leandro Castan were unable to clear and Archimede Morleo was there to convert. The two sides went into halftime with Roma ahead 2-1 after a frantic few minutes.

Three minutes into the second half, it seemed Bologna had achieved the impossible. Gyorgy Garics had pushed far up the field and whipped in a deadly cross from the right wing. Powerful striker Rolando Bianchi rose above Benatia and smashed in an equalizing header against all odds. By some miracle, Bologna had drawn level from two goals down.

Ten minutes later, it was the substitute Mattia Destro that made the big impact yet again. On form playmaker Miralem Pjanic threaded the Italian striker through on goal, but Destro still had plenty to do. With a few quick touches he had turned and managed to curl the ball around Gianluca Curci, a beautiful goal to restore Roma’s lead. The youthful attacker has become one of the Giallorossi’s biggest threats very late on in the season.

Time began to tick down, and frustration on the Rossoblu’s part began to kick on. Rene Khrin was shown a straight red card for a dangerous, two footed challenge on Pjanic that left the Bosnian on the ground for a few minutes. At this point the game was completely decided.

Roma wasn’t done yet, though. A minute into injury time, Mattia Destro converted a Federico Balzaretti cross to score his second goal of the evening and two minutes later Adem Ljajic scored a placed header from Miralem Pjanic’s corner kick. The match ended 5-2 and an absolutely ecstatic AS Roma side celebrated wildly with their traveling contingent.

“Nobody thought we could do it,” said captain and manager Francesco Totti after the game, all smiles. “This is a wonderful achievement for the club, I could not be happier. The Scudetto is coming home to Roma!”

Adem Ljajic led Roma’s goalscoring charts by managing to find the net 16 times in league play while Totti himself led in the assists category with a league leading 10. The defense also performed admirably all season as goalkeeper Morgan De Sanctis leads the league in clean sheets with 17.

With three games remaining, AS Roma is the champion of Italy. The table looks as follows: 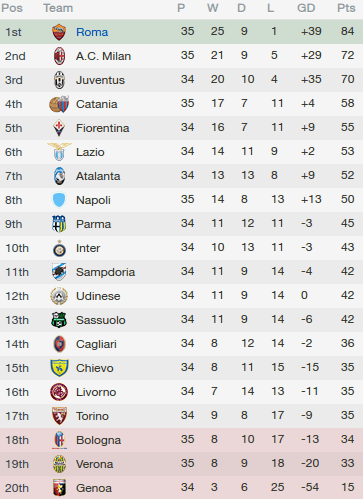 That's a Bergomi margin of points right there
Login to Quote