Nathaniel
8 years
Who needs Morata? You have the monster that is Destro! De Rossi may be a miss but I am sure you will pull through.

fmhunter
8 years
Still can't decide which of your three is my favourite man. All too good
Login to Quote

Nathaniel: True, Destro is a monster, but De Rossi will be a big miss

fmhunter: Thanks man, means a lot


Thank you all so much for helping me reach this massive milestone, let's keep this going!! Here's to another 30k, I certainly couldn't have done it without all of you amazing readers

Maybe he was Destro(yed)?
Login to Quote

Jer
8 years
so no update?
Login to Quote

Neal
8 years • Edited
Josh_MU: Thanks mate, it's a great milestone

edu1878: Yeah, clearly he got DESTROyed

Pauker: It's coming in a matter of hours 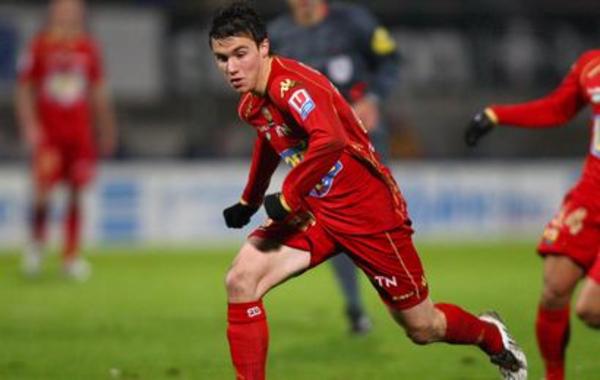 Seeing Red: AS Roma's Sebastian Corchia was sent off in the second half for two yellow cards, leaving his side with 10 men.

Despite coming into the match in red hot form, defending Scudetto champions AS Roma trailed Inter Milan by 2 points atop the standings. To try and keep pace with the Nerazzurri, Francesco Totti would have to take the full three points against archrivals SS Lazio in the Derby della Capitale.

In hopes to deal without the inspirational Daniele De Rossi in midfield, Totti opted to start Nuri Sahin as the deepest midfielder to control the pace of the game while slotting McDonald Mariga in alongside Marco Verratti to add a bit of defensive steel. While this certainly worked in keeping possession, Lazio created far more chances, getting 9 shots on target to Roma's measly 2.

Roma actually created the first clear cut chance of the match just 16 minutes in. The Giallorossi sprung a lightning counterattack through Miralem Pjanic, but the Bosnian's superb strike was palmed away by an outstretched Federico Marchetti.

From there on out, Lazio peppered Asmir Begovic's goal, but to little avail as Pjanic's countryman stood strong and managed to make strong saves to keep Lazio off of the scoreboard.

In the second half, a couple of events turned the game on its head. Firstly, much to the satisfaction of the Roma faithful, Totti brought himself on for Mattia Destro. The legendary manager and captain managed to hit the post with a curling free kick just two minutes after checking on, and it had seemed the tide may have turned toward the Giallorossi.

On the hour mark, however, Sebastian Corchia slid into Cristian Ledesma from behind, warranting a second yellow card and thus a sending off. Down to 10 men, AS Roma were forced to retreat and create a defensive presence in and around their box to stave away the waves of Lazio attack.

With just a few minutes remaining in the match, the Biancocelesti nearly stole the victory. Ledesma's corner to the near post was flicked on by Stefan Radu, and the defender's header crashed off of the underside off the bar and off of the ground before being cleared away by Paolo Cannavaro. Replays showed that the ball had crossed the line, but the referee did not call a goal, and the match finished 0-0.

"Obviously we wanted to win this game for the fans, but today we did not play at 100% of our potential," said Totti after the match. "Obviously it was difficult with 10 men, but we had an hour before then to get a goal, and we simply did not do well enough. Now we must bounce back next week and try to stay in contention for the title."

After these dropped points, Roma are now a full 4 points behind Inter Milan and have a lot of work to do to catch back up. The full table is as follows: 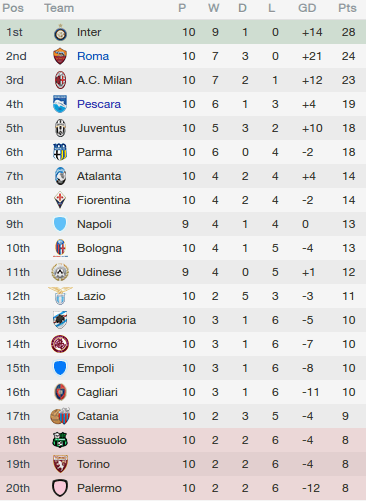 Josh_MU
8 years
I'm sure you can catch Inter!
Login to Quote