pompeyblue
8 years
Another class update and graphics, especially the banner

Meyer's a fantastic player so hopefully you can keep hold of him, but Rojas would certainly be a good replacement!
1

Tallery
8 years
Wtf is that banner? Luton Town Football Club are happy to announce the signing of Emerson Cardoso from Santos (Brazil) for a fee of £22,500,000. the twenty-two year old attacking midfielder will wear the number 11 for The Hatters and will meat up with his new team-mates next month in preparation for their first pre-season friendly against Bayern Munich.

Emerson came through Santos' academy and made the breakthrough in to their senior squad in the 2018 season. He has since made 194 appearances for Peixe, scoring 24 times. Emerson is a very versatile player and while he players a central role in midfield or attacking midfield, he can be deployed on the right hand side and still provide the same, wonderful qualities, which is where his new manager Ryan Ferguson is expected to deploy him in the coming season.

Touted as the next Ronaldinho, Emerson possesses a great amount of skill and flair. Combined with his unmatchable pace and his expert decision making, Emerson is almost impossible to catch on or off the ball. Emerson has a great passing range and has an eye for goal from range. He also adds to Luton's set-pieces with his dead-ball expertise. Ferguson will be looking to harness Emerson's strengths this season, as well as making him the best player that he can be.

Ryan Ferguson: "I'm delighted that we have secured the Emerson transfer. I have been a long-term admirer of his many abilities and it will be a pleasure to work with him. Although my main objectives for transfers is to secure very young players and mould them in to the players that we want, every one in a while we will have to bring in ready-made stars to bolster our line-up. That being said, I do believe that Emerson can develop even further as a footballer and become one of the greats, alongside our other young stars such as Kim Morgan, Vuk Alavanja and Ben Bruce." 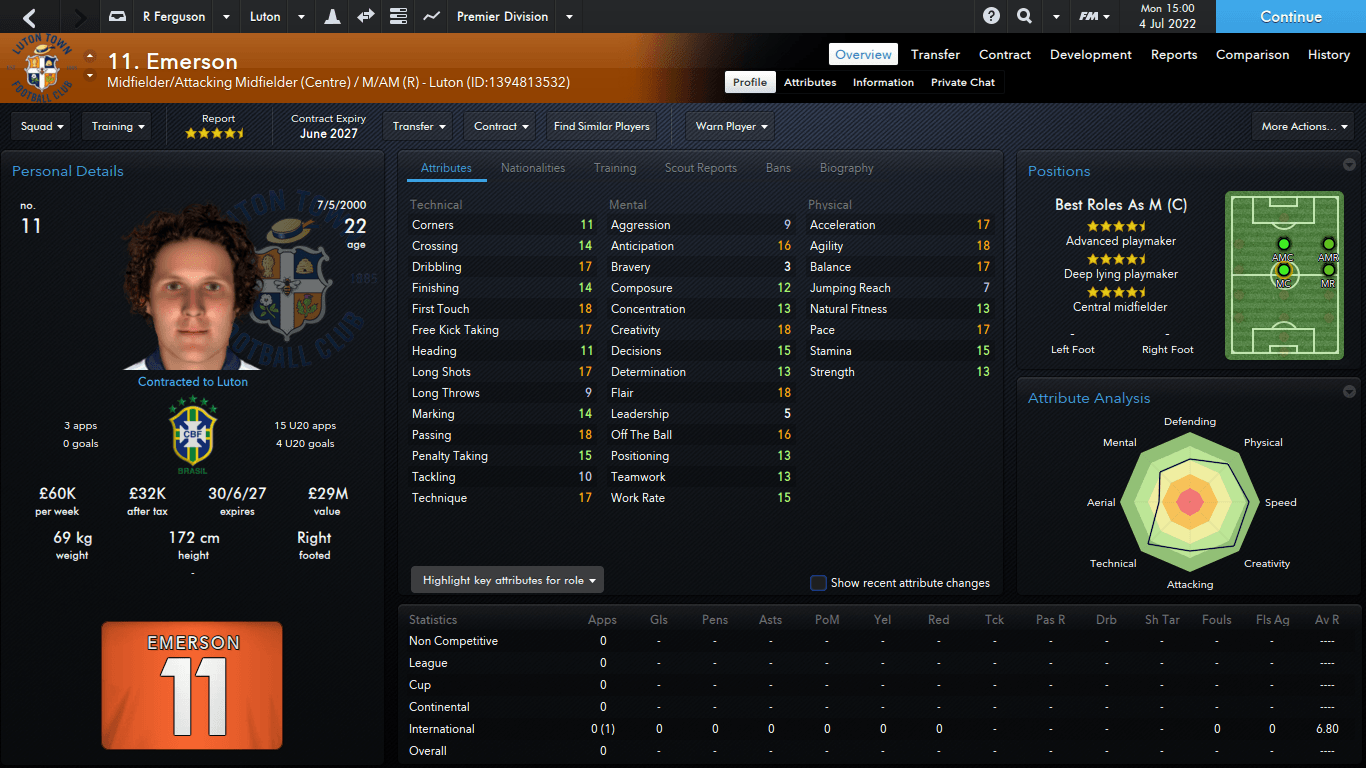 "I am happy to sign for Luton. I have known for years that they wished to sign me and I am so glad that the time has finally come. Ferguson is a great manager and a great coach and I look forward to my first training session under his command. I cannot wait to play Kenilworth Road and hopefully help to bring many trophies to the fantastic Hatters fans. I want to get the best out of Luton and for Luton to get the best out of me!"

You will get to see a report of Emerson's new team-mates at the end of the pre-season, once all transfers and friendlies have been completed!

pompeyblue
8 years
What an incredible signing!

bebero
8 years
Looks very very good, and his age makes him a player of the future, I hope to help you, and become an emblematic player for your team.
Login to Quote 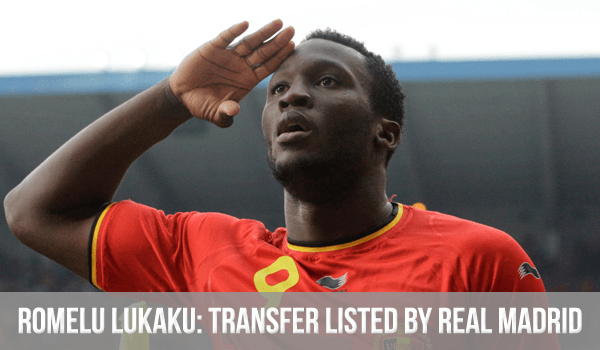 Real Madrid officials have today confirmed that Romelu Lukaku has been placed on the transfer list. The Belgian striker is considered surplus to requirements after an injury-plagued final season which saw Romelu sit out of most games. Los Merengues are believed to be looking for £25,000,000 for the striker and there are many clubs believed to be interested, including former club Chelsea and their domestic rivals Luton Town.

Romelu Lukaku signed for Real Madrid from Chelsea in 2015. The powerful Belgian forward has made 306 appearances for the capital club of Spain in all competitions, and has scored 152 goals, one off a goal every two games. However, Lukaku suffered with a serious calf problem last season as he was forced in to surgery on two occasions. Despite scoring an impressive eleven goals in twenty-two appearances in what was a truly brief season, Lukaku lost a lot of his technical ability and is not quite the player he once was.

Through his injuries, Real Madrid found goal scorers in German strikers Timo Werner (26) and Petar Svalina (23). These two attackers have jumped ahead of Romelu Lukaku in the pecking order and are unlikely to budge, unless bought for a big fee by another club.

Former manager José Mourinho is rumoured to be interested in Lukaku, as Chelsea's attack lacked goals last season. Luton Town are also expected to compete for his signature, as Ryan Ferguson looks to finally replace the gap left by Angel Correa last summer when he moved to Spurs. Juventus and Valencia are both considered outsiders in Sky Betting but both are capable of paying the required fee to take the Belgian to their club. Where will Lukaku play next season? Where do you think he will play?" 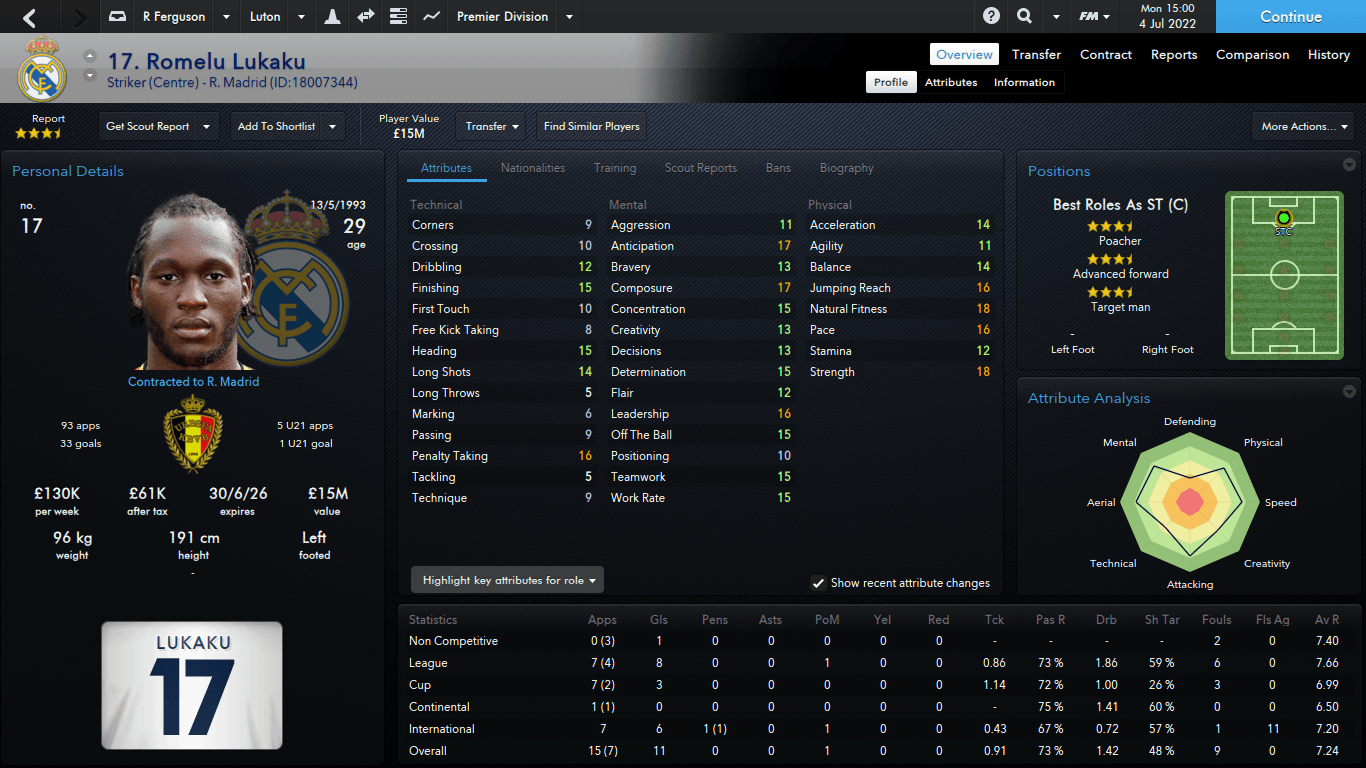 pompeyblue
8 years
Lukaku would be a very good signing so hopefully you can get hold of him!
Login to Quote 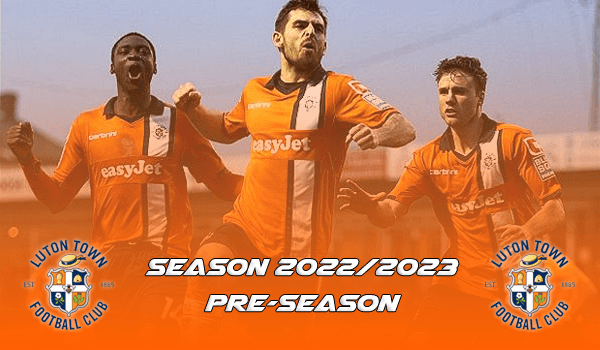 Aside from our defeats against Bayern and PSG, we had a truly fantastic pre-season where we scored for fun. Our highlight was our tour in Australia, where we faced AIS, Adelaide United, Melbourne Heart and Perth Glory. I played a lot of youth players during the pre-season, mixed with the senior squad, and everybody got some fantastic experience. Kim Morgan and Maximilian Meyer were the stars of our pre-season while our best youth showing came from Artem Ryabov, who will play in our U21s this season. 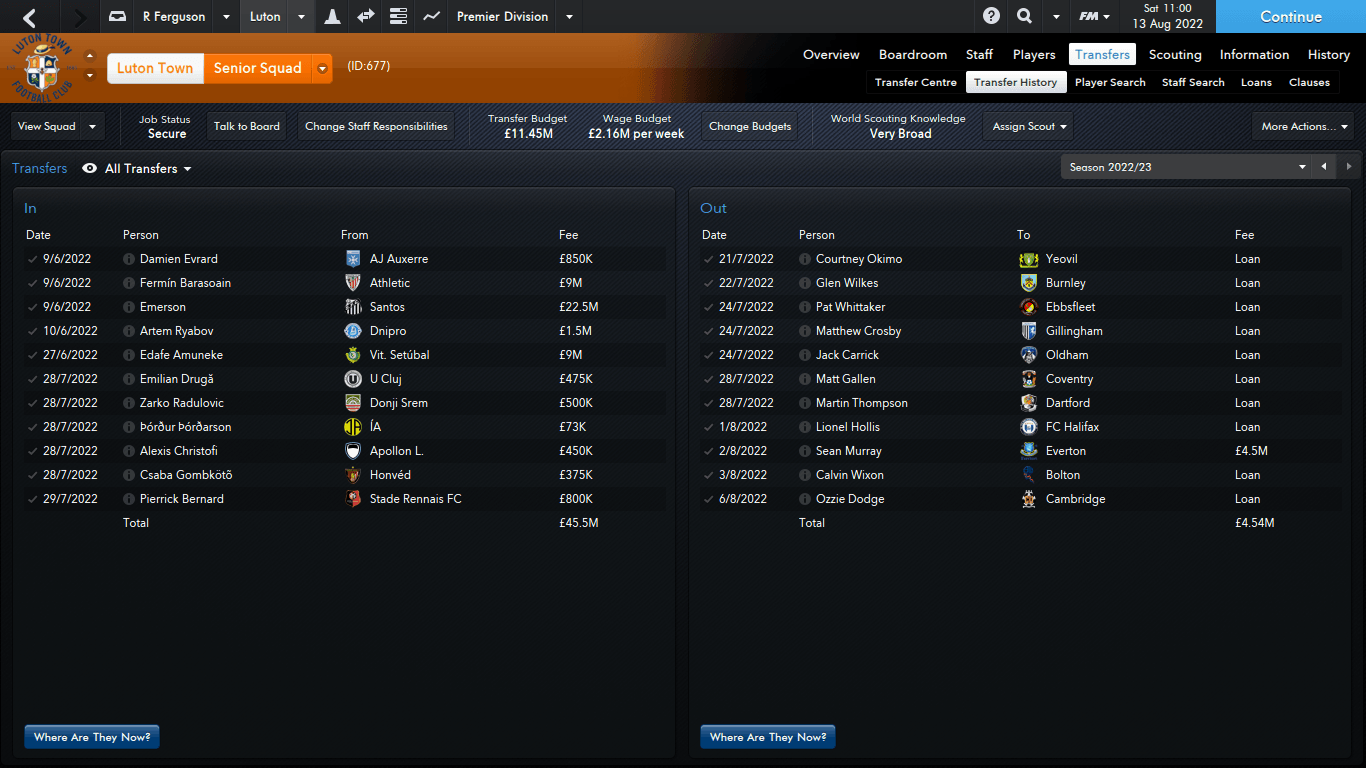 Since signings of Emerson and Ryabov, we did bring in a lot of new players. Amuneke was our only other senior signing, while the rest joined our U18s. Our one sale was Sean Murray to Everton. His contract was due to run out at the end of this season and I had no plans of renewing it so I was pleased to sell him, even if it was to another Premier League club. We spent a lot of money this transfer window, although we did bring in a total of eleven players, which is very pleasing. Hopefully they will become stars. 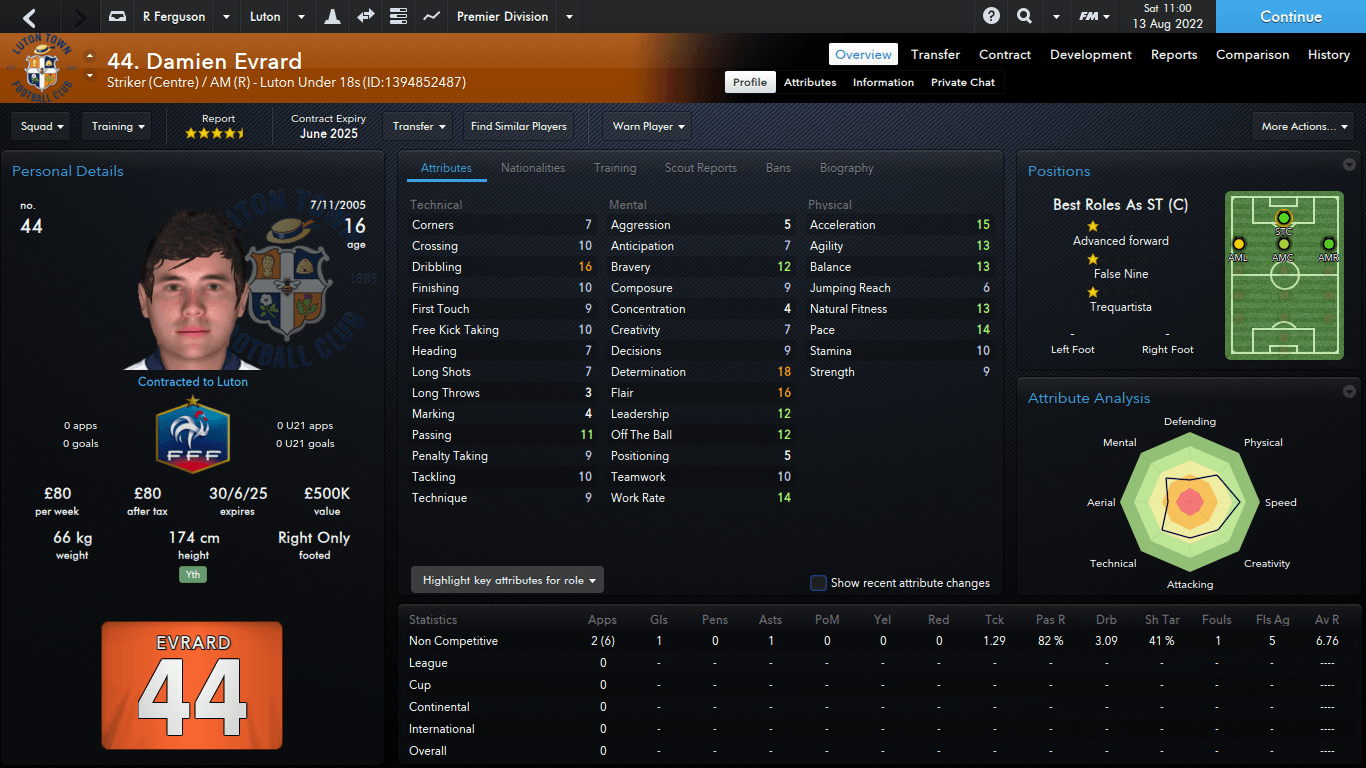 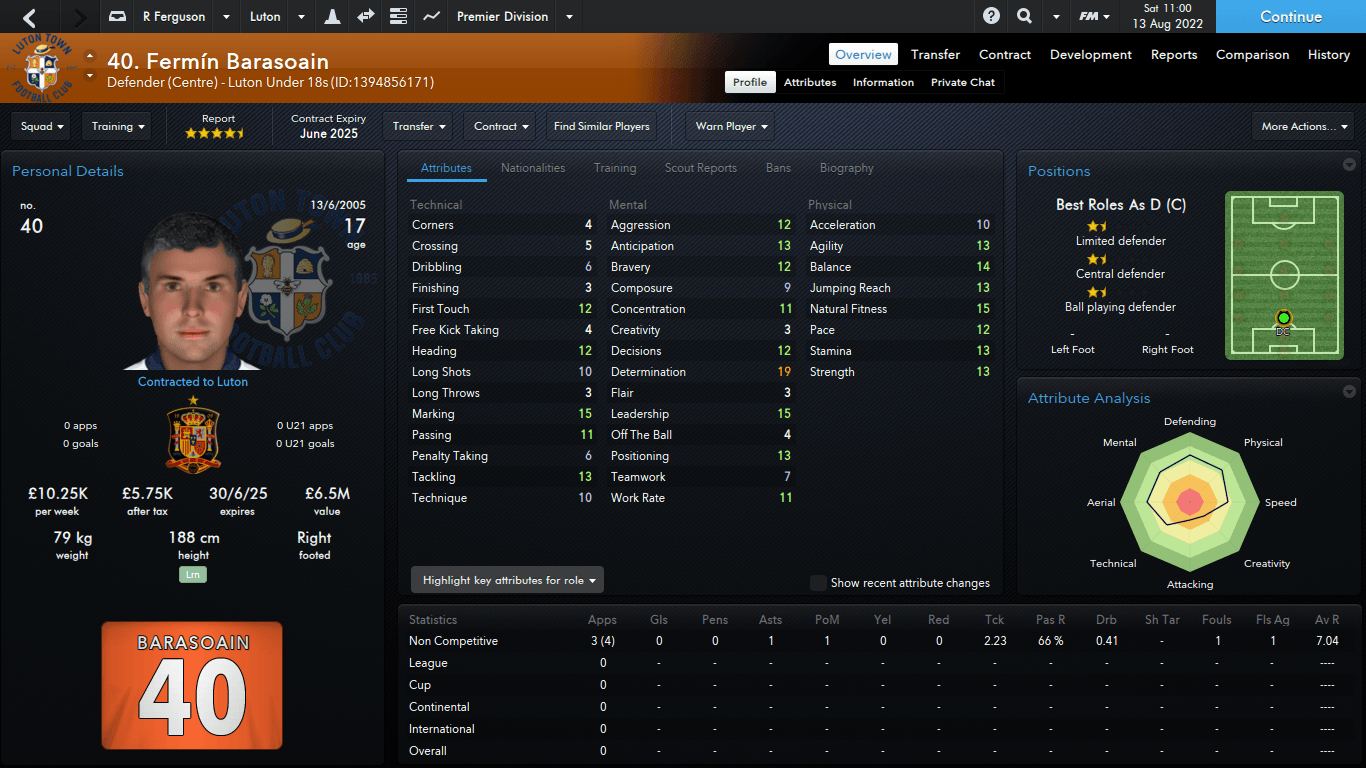 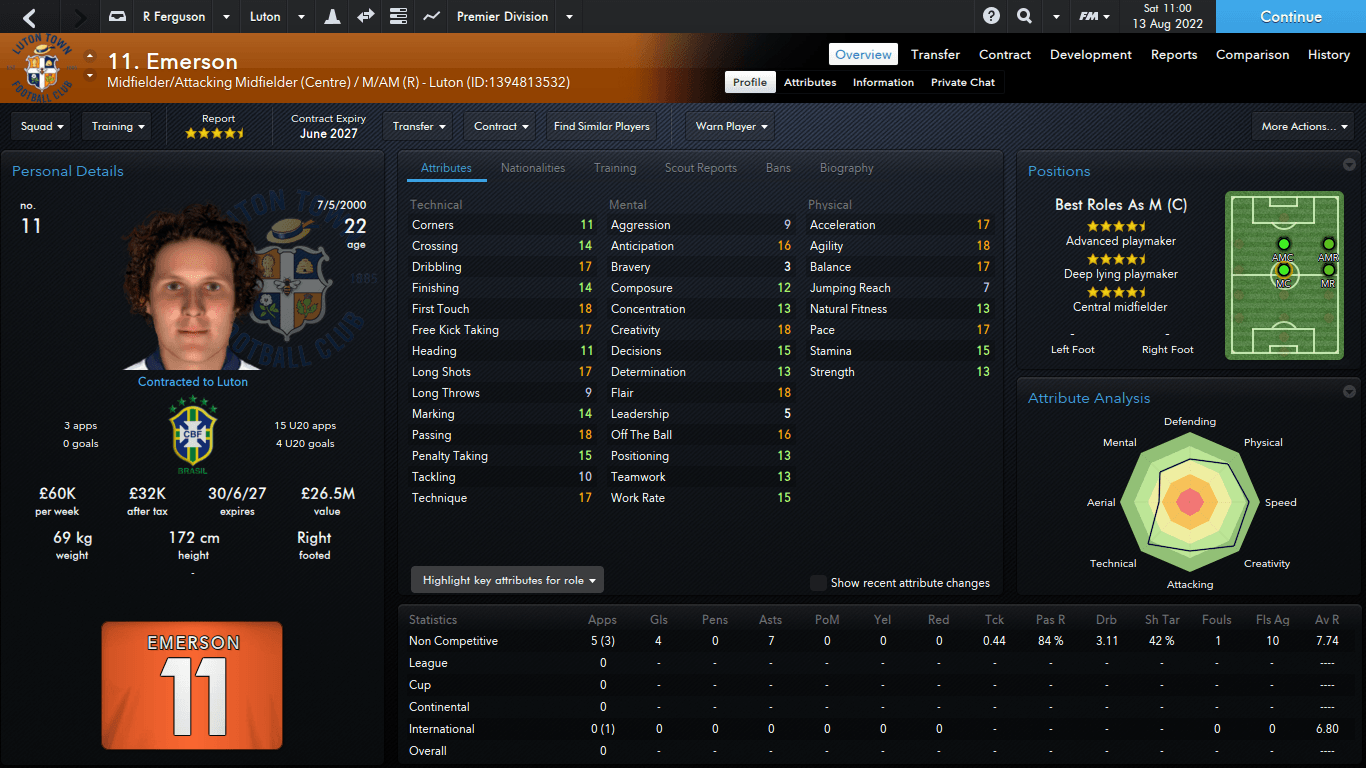 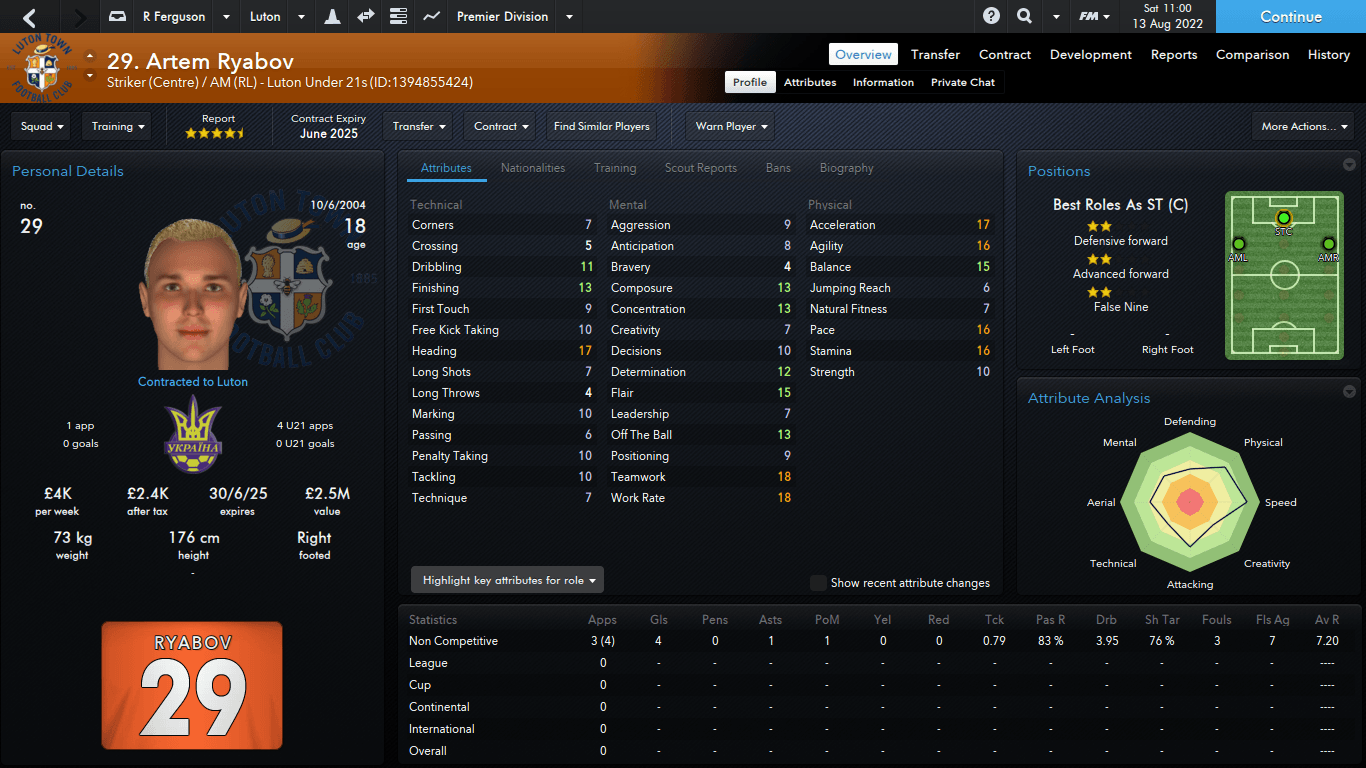 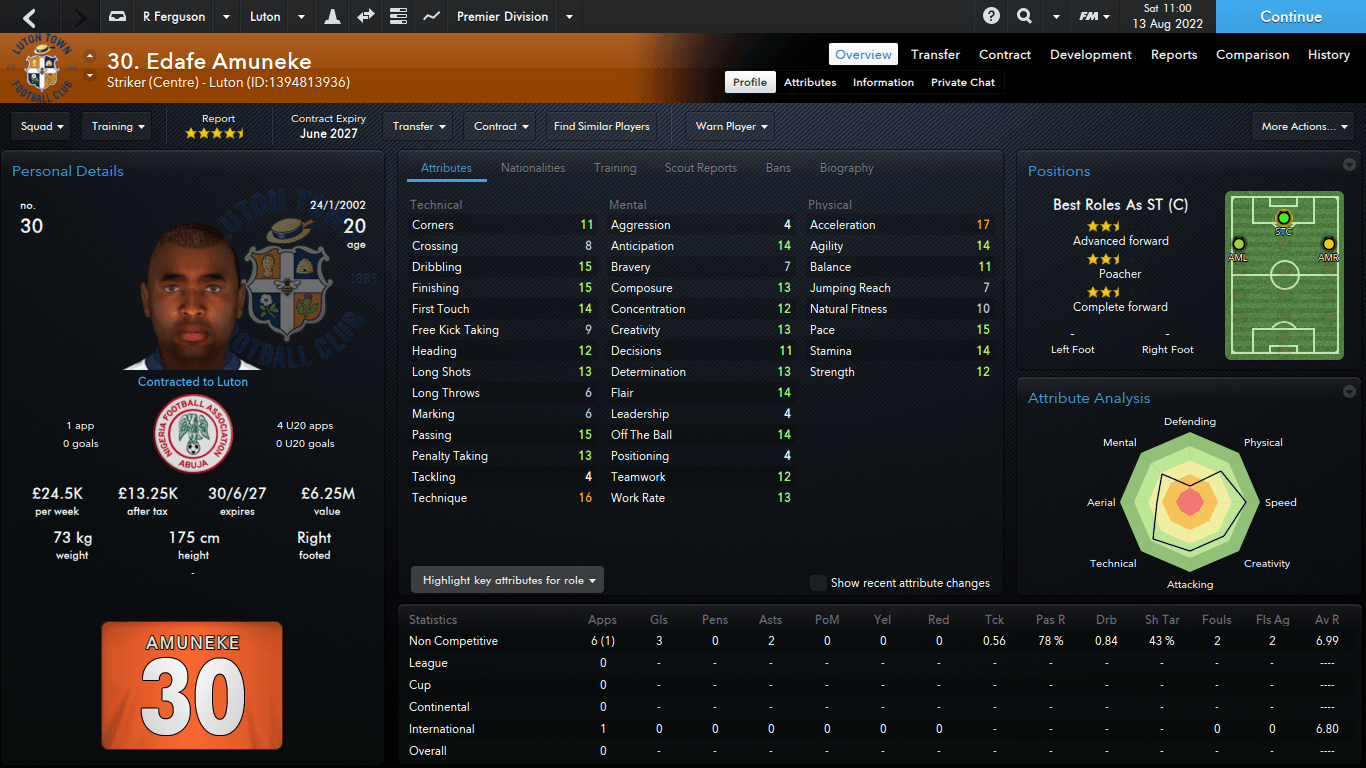 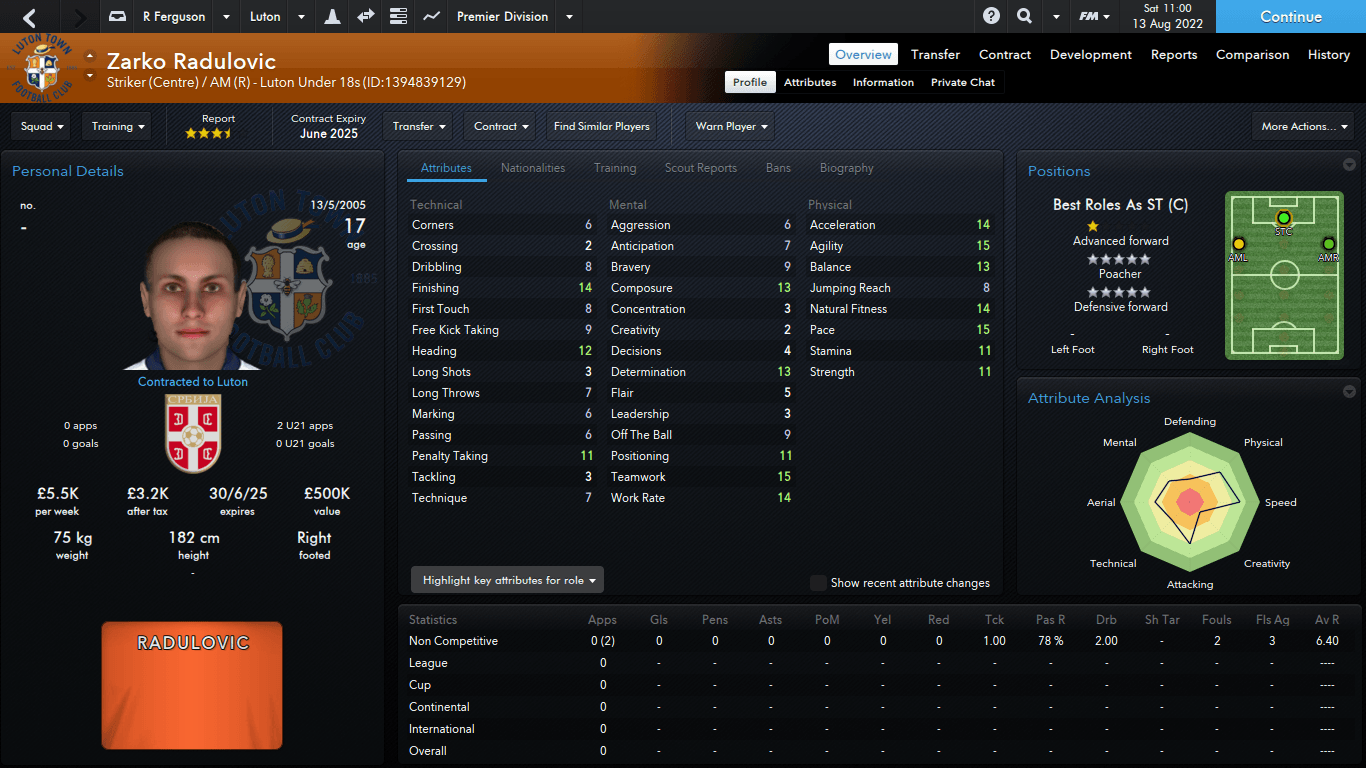 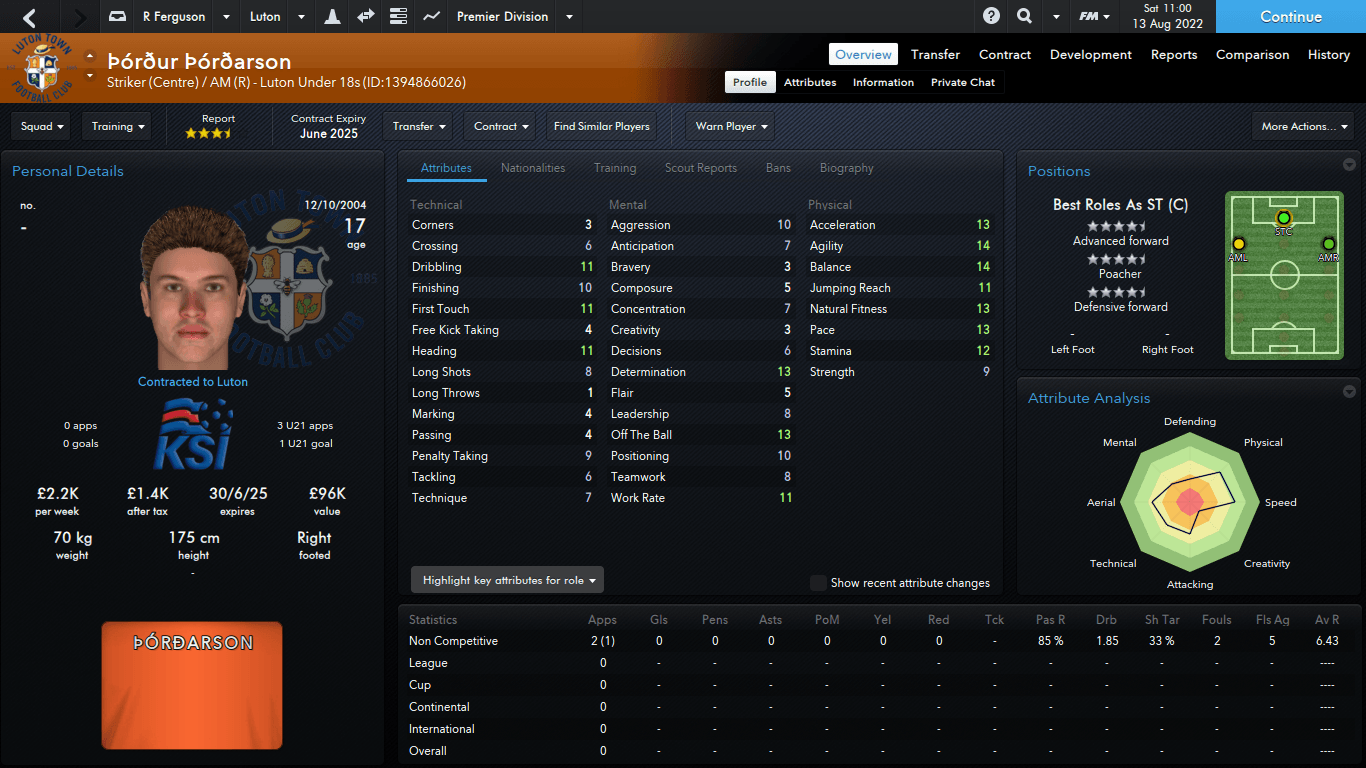 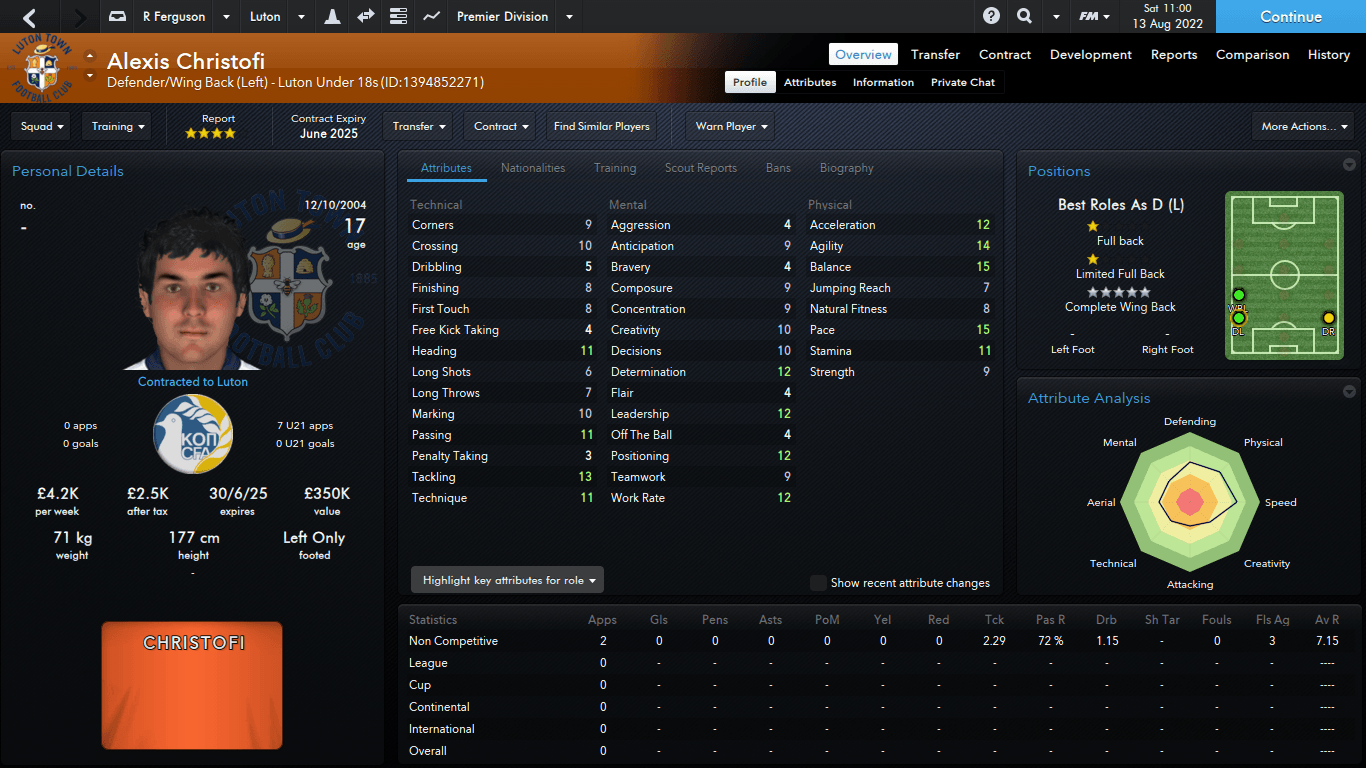 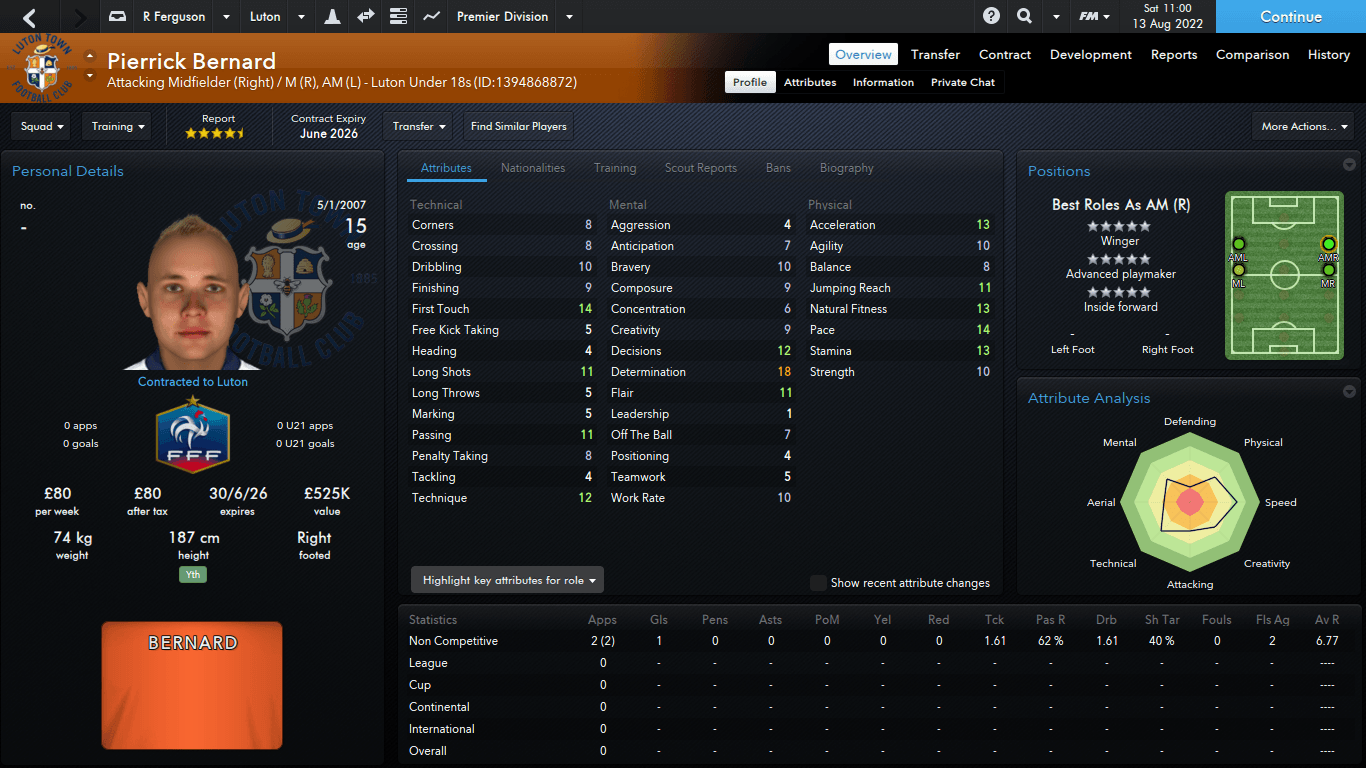 While I did not describe each signing too much, it is only because I think that the screenshots are very self-explanatory. The majority of them are youth players and hopefully they will take shape in to the players which we want them to be. Next up is a review of my senior squad and a look at our first few games of the season.

How the hell do you even pronounce this name?!?
1
Login to Quote

Walter, I have no idea