Tallery
8 years
Don't be too disheartened by the results in Europe, the first year is always going to be tough. Next year you can build on it, and your players have got a bit more experience as well. A nice sum of money for Correa, and I have no doubt you will invest that well

Good luck for next season!
1

Season Ten - A Look At The Club 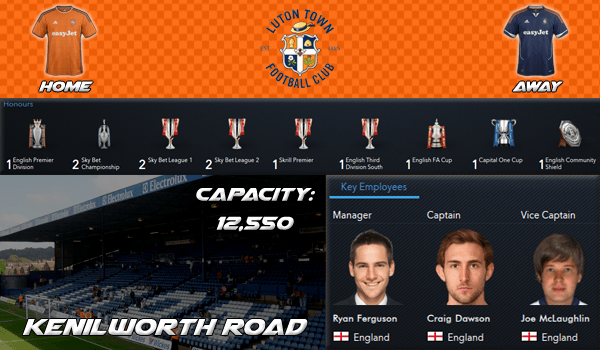 We are now coming in to the tenth season since the birth of this save and a lot has changed since the start. I'm just going to give you a quick run-down of the basic info of Luton Town Football Club.

Luton Town Football Club, nicknamed "The Hatters", were founded in 1885. They are currently owned by English businessman Tom Naylor, who is known for several controversial decisions, such as the sacking and re-hiring of Luton Town legend, and current manager, Ryan Ferguson. The Hatters play in orange with a white/blue trim and their home games are at Kenilworth Road, which seats just 12,550 people. There are rumours of a new stadium being built in secret, but nobody actually knows the truth for certain, not even Ryan Ferguson.

Luton have twelve trophies to their name, seven of which were won under Ryan Ferguson. The 2020/2021 season saw Luton win both the Premier League and FA Cup in a famous double, which has been hallmarked as Luton's greatest ever achievement. Luton are yet to add a European trophy to their cabinet but if they continue to improve at the rate they have been in recent years, it won't be long before they are Champions of Europe.

Current manager Ryan Ferguson hails from Liverpool in North-West England. The thirty-four year old grew up supporting Liverpool FC but never made the professional game himself. He was hired as Luton manager in 2013 where he remained until 2018 before he was controversially sacked by Tom Naylor. During his exile, he managed Aston Villa, although he took charge in just five games before Mr. Naylor asked him back to Luton, where he has been ever since. Ferguson also managed the Republic of Ireland for a year during the 2016/2017 season but resigned from the position due to boredom of the job.

Luton's captain Craig Dawson is a product of Manchester City's academy, although he never broke in to the first team. His most successful previous spell at a club was at Sunderland (2014-2017) but after a string of moves, wound up at Luton for £6M in January 2018. The thirty-two year old defender became captain of the first team in 2020 but has found himself fall down the pecking order last season due to the arrival of Serbian international Vuk Alavanja from AC Milan, who cost the club a massive £22.5M.

Luton's vice-captain Joe McLaughlin is a product of Fulham's youth academy. He made his Fulham debut in 2018 at the age of 18 and in 2019, he joined Luton Town for £12.5M. The English defensive midfielder has been a key part of Luton's midfield in recent years but despite his impressive performances, he is yet to receive an England call-up. However, it will surely be just a matter of time before the twenty-three year old plays international football.

Luton's facilities are quite impressive and they attract a lot of players. However, they are not yet ready to compete alongside the facilities of the world's leading clubs but constant improvements are being made to match their levels.
Corporate Facilities: Fairly Basic
Training Facilities: Superb
Youth Facilities: Superb
Junior Coaching: Excellent
Youth Recruitment: Established

Tallery
8 years
Great update, but I wouldn't call this a 'brief overview'...

Aaron
8 years
Season 10 will be class!

pompeyblue
8 years
Another couple of great season reviews and a class update their!
Lovely graphic too, not really surprising though

Walter
8 years
A shame you couldn't retain the title, but you've still done a tremendous job! A nice overview of the club there, too.. Tom Naylor must have the IQ of a jellyfish

Justice
8 years
Everybody, thanks for all the comments guys 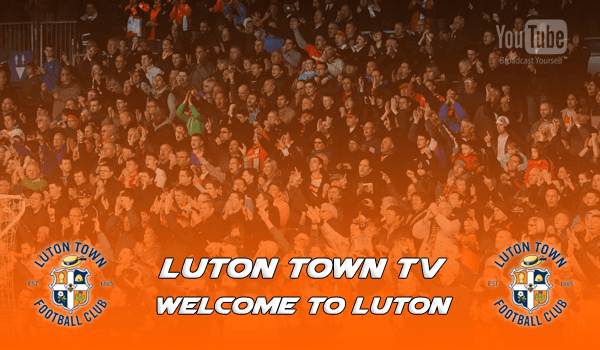 9th June 2022
Luton Town would like to welcome three new players to the club. They are all young and come from very different countries around Europe and we are very excited about the future which they have at this club. The three players are Damien Evrard of France (AJ Auxerre), Fermín Barasoain of Spain (Athletic Bilbao) and Artem Ryabov of Ukraine (Dnipro Dnipropetrovsk). Evrard and Barasoain will join our Under 18s squad while Ryabov will join our Under 21s squad. Many of you might remember Ryabov from last season when he played and scored against us in the UEFA Champions League match against Dnipro. The combined fee for the three players is £11.35M. - Beth Walters, Luton Town's Chief Press Officer 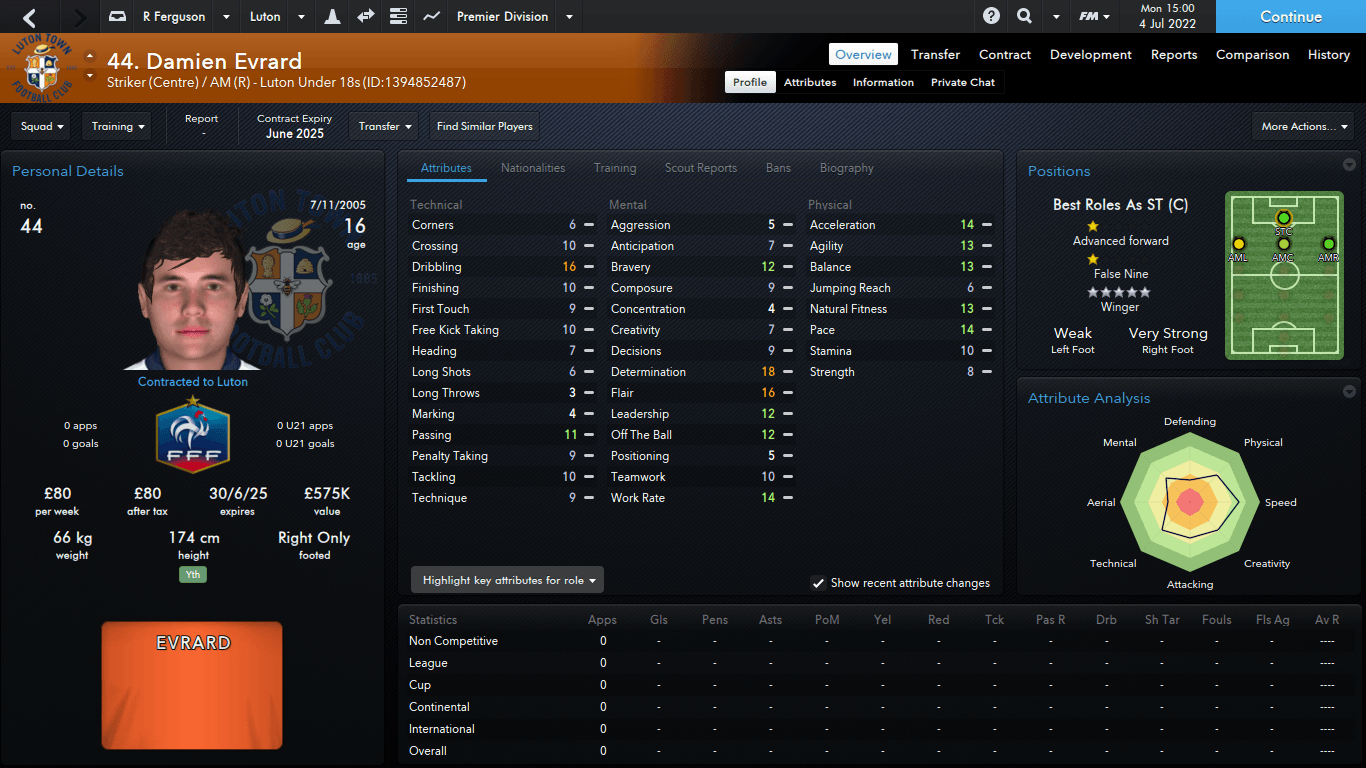 Damien Evrard came through the youth ranks at Racing CFF Colombes, a team in the French National league (3rd division). During January 2020, he made the move to AJ Auxerre who, at the time, were in the same division. He made his debut in the same season, aged just 15, and scored the only goal in that game. Evrard made 14 appearances the next season in Ligue 2, after his club were promoted, but failed to find the net even once. Aged sixteen, Evrard agreed to make the move to English giants Luton Town and he joined today. Damien is a natural striker but can be deployed on either wing. He has a very slight build but has explosive pace and can squirm through defenders. Evrard is very skillful and can make the impossible happen at any given moment. He is a very determined youngster and could develop to be the next Angel Correa.

"I am delighted to have signed for a big club like Luton. They play very attractive football and I want to be a part of winning trophies here. Also, I think Beth is very sexy." 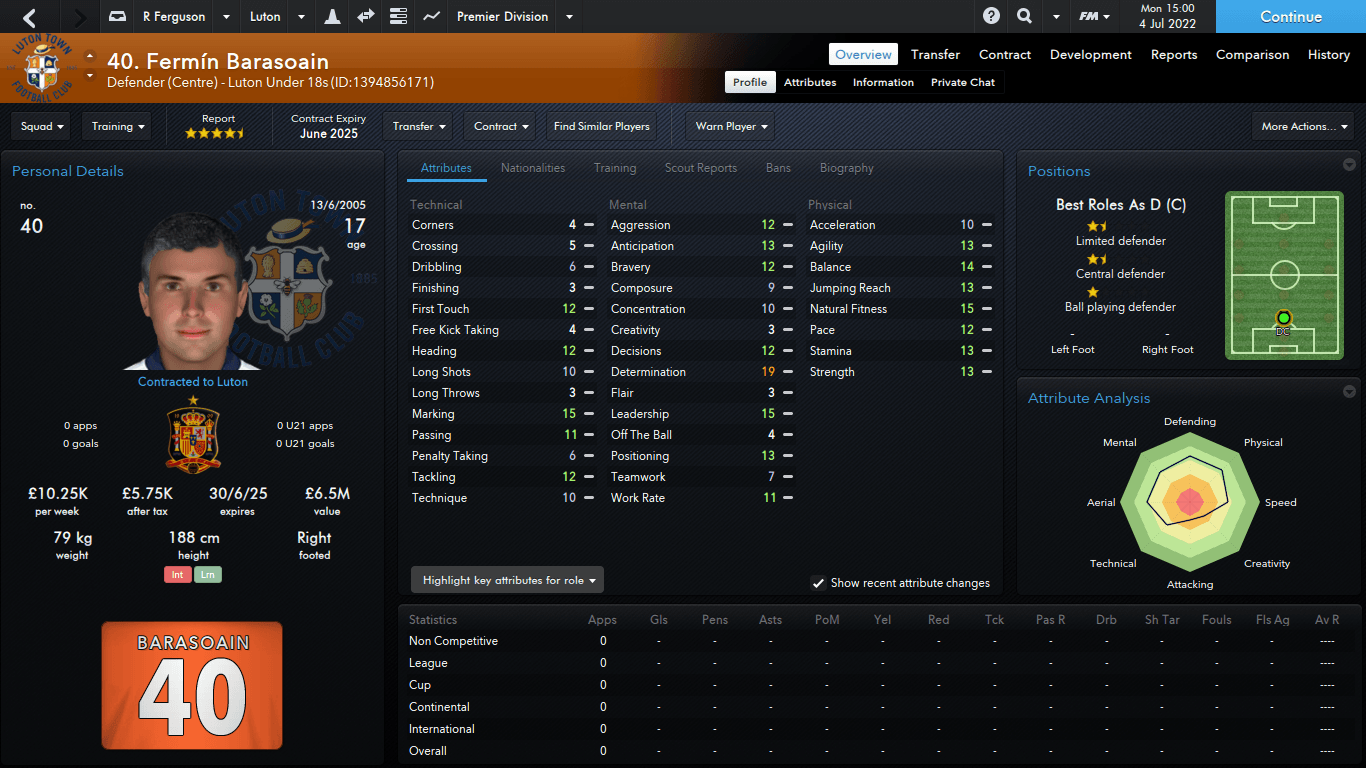 Fermín Barasoain is the product of the very famous Athletic Bilbao youth academy located in North-Spain, in the Basque region. He made his debut for the senior team in Liga BBVA in the 2020/2021 season when the club had an injury crisis on their hands. Aged just fifteen at the time, he made ten appearances in the league and cup, notching up two Man Of The Match awards and even added an assist to his name. The following season saw Barasoain play a big part in Bilbao's second team in Second Division B2, where he made 17 appearances and amazed his critics with intelligent defending. Barasoain joined the club for £9M but he is worth every penny. Measured at 6'2, Barasoain is very effective in the air and his overall physical play is very impressive. His strength is his marking and he is a very intelligent defender, one who knows what to do in every situation. It is also worth noting that Barasoain is the captain of Spain U19s, demonstrating his outstanding leadership ability. He is touted as the next Sergio Ramos and Luton are hoping he doesn't disappoint.

"It is an honour to be a part of a club with great pride and humility. Luton Town is a club which is moving forward and I want to be a part of that. I can't wait to put on the orange of The Hatters!" 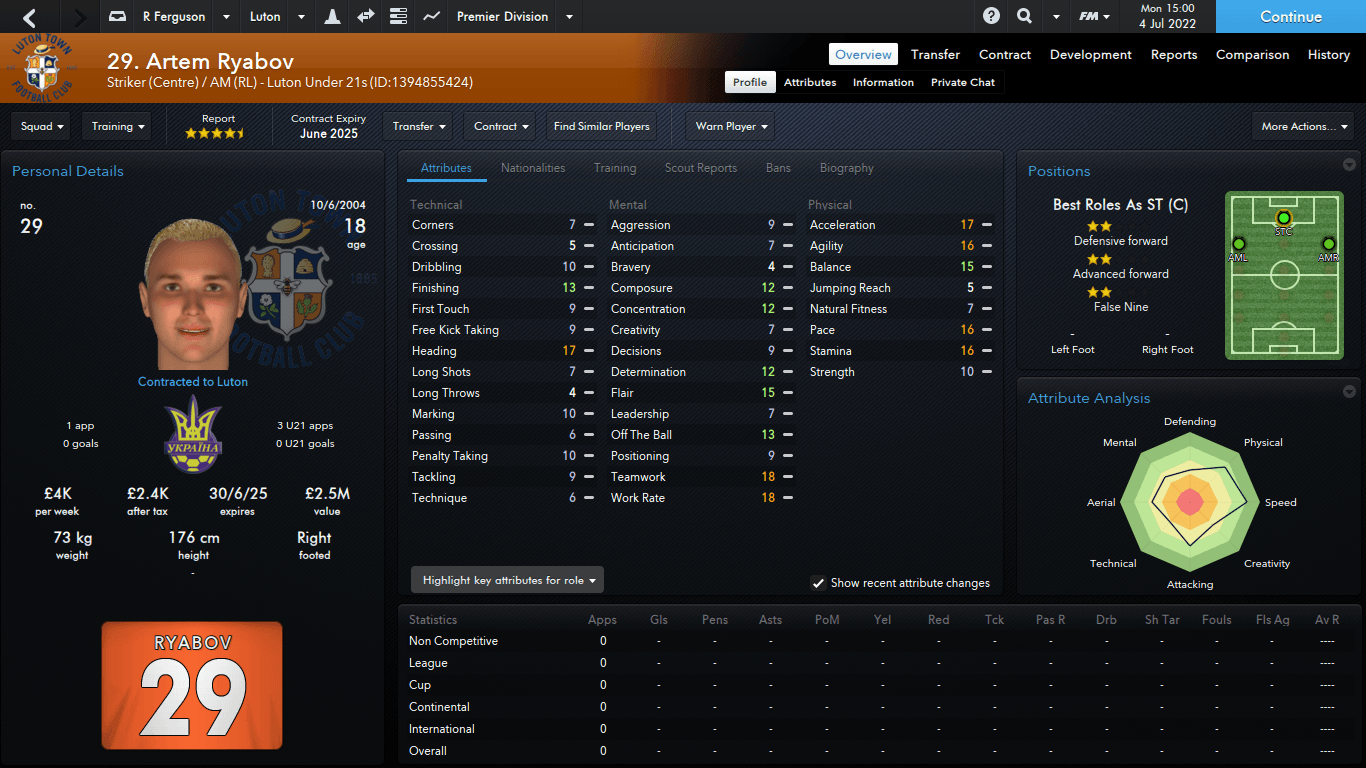 Artem Ryabov graduated from the Dnipro youth system last season and made his debut aged just sixteen. He played 25 times (only starting 5 times) for Dnipro last season in all competitions, scoring an extremely impressive 13 goals. It is worth noting that one of those goals came against Luton Town in the UEFA Champions League group stage. He has also been recognised internationally as he made his Ukraine debut in March against Bosnia & Herzegovina. Ryabov joins Luton's U21s squad and is known for his explosive pace and energy, along with his cute eye for goal. He is hard-working and plays for the team. He is touted as the next Carlos Tevez and will hopefully reach the heights which the striker from Argentina did long ago.

"It is great for me to join Luton Town. The Premier League is the best in the world and I can't wait to play in it. Hopefully I can improve a lot as a player and make a name for myself here."

So, which player is your pick of the bunch? There are plenty more updates coming soon, keep following!

Previous Update: Season Ten - A Look At The Club
Next Update: Luton Star In Demand
Login to Quote

Fantastic update, very unique too, with some great signings!
1
Login to Quote

Walter, I am hoping he develops well, he's a born leader

tallery1164, hopefully I can bring in some more before the summer ends 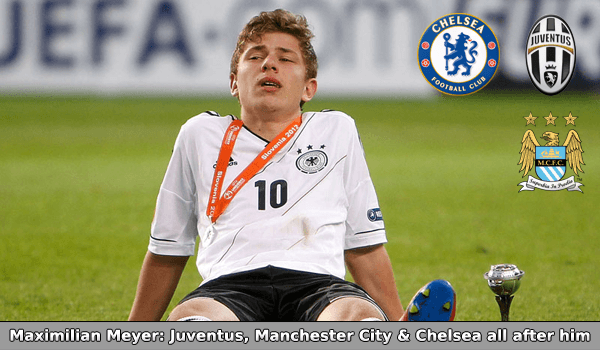 13/06/2022
Luton Town's German attacking midfielder Maximilian Meyer is the victim of interest from three European giants this summer. Italian powerhouse Juventus leads the hunt for his signature, while domestic rivals Chelsea and Manchester City are also looking for the twenty-six year old to make a move.

Juventus were heavily linked with Meyer in January and reportedly had a massive £35,000,000 bid rejected by Luton, who were holding out for a bid of at least £45,000,000. However, the signing of Russian star Dmitry Simonov in January has seen Meyer have major contention for his starting spot and has been benched on numerous occasions. This could be the perfect time for Juventus to make a bid similar to that from January, as current coach Diego Simeone desperately needs more quality in a team which only finished fourth in Serie A last season. 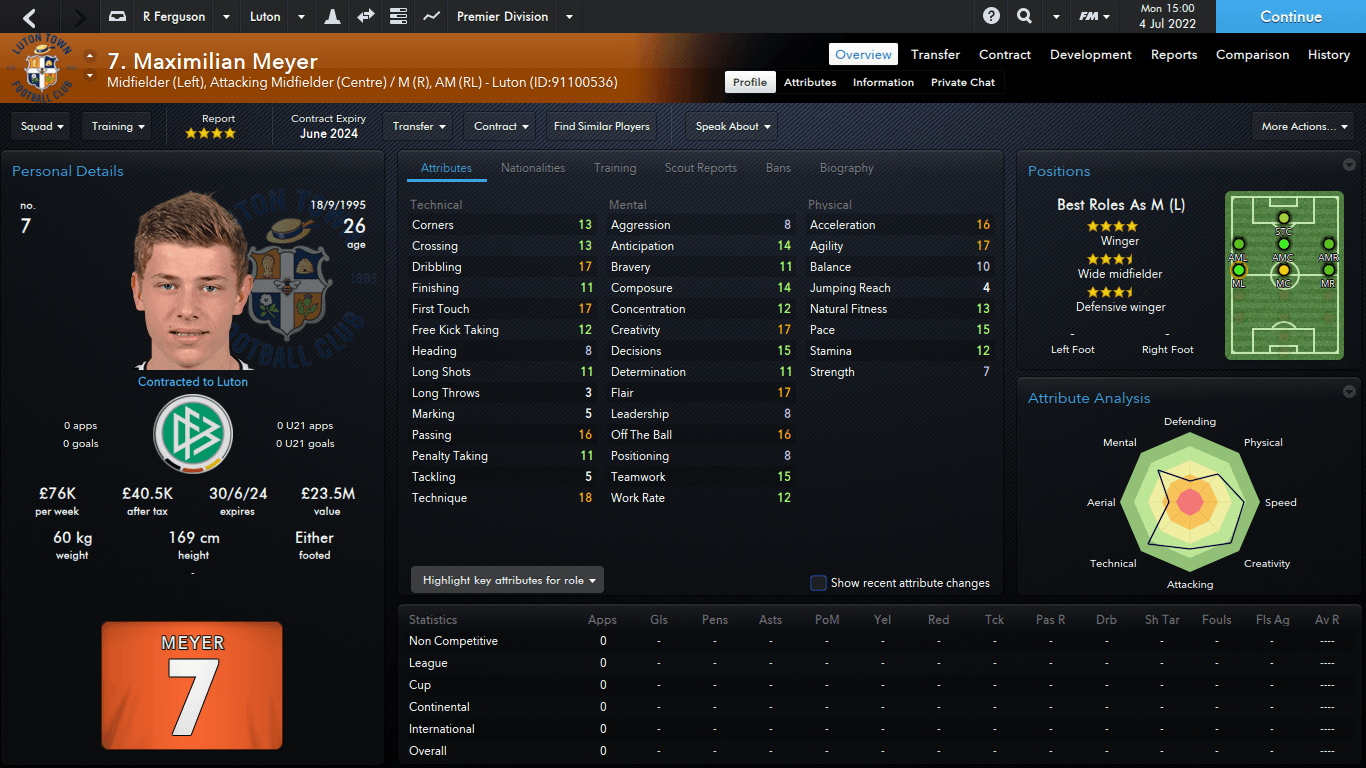 José Mourinho is also reportedly keen to acquire Meyer's services as he looks to replace an ageing Eden Hazard (31). 'The Special One' has already added two big-money players to his ranks in Benjamin Mohr from Dortmund (£29,500,000) and Moi Gómez from Malaga (£28,000,000). Despite finishing in sixth last season and not having Champions League football, The Blues can certainly attract the best players to their club with an attractive lifestyle and truck-loads of money.

The third club heavily linked with Maximilian Meyer is Manchester City. Josep Guardiola's side have lacked the ability to mount a serious title challenge over the past two seasons and their manager has come under an overwhelming amount of scrutiny for failing to add an out-and-out left winger to the team, instead opting to play Davide Torre, a natural striker, on the left flank.

One player picked out as a possible replacement for Maximilian Meyer, should he depart The Hatters this summer, is Napoli's Mexican winger Pascual Rojas. The twenty-five year old has failed to find form for his club despite performing thrillingly for his national team. 'El Mujeriego' would cost somewhere in the region of £30,000,000 but would certainly add a lot of quality to Luton's side. 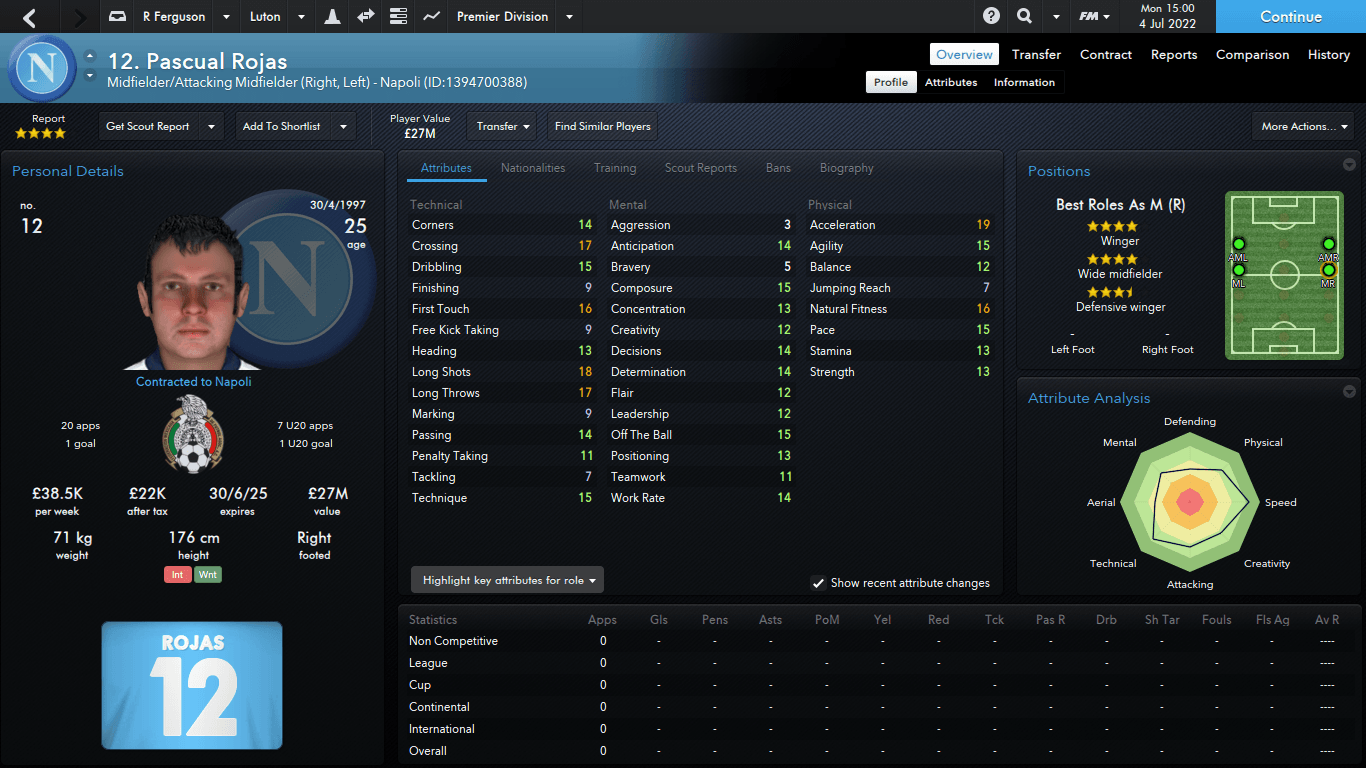 Ryan Ferguson's (Luton manager) ideal scenario would be to hold on to Maximilian Meyer but he would be hard-pressed to keep the German should a considerable bid come in.