pompeyblue
5 years
WOOOOOOO! Updates!
Some good signings their, and a fairly decent season but here's hoping the next one is even better

Neal
5 years
Really well done to salvage such a crap start by Appleton! Good to see Fergie back 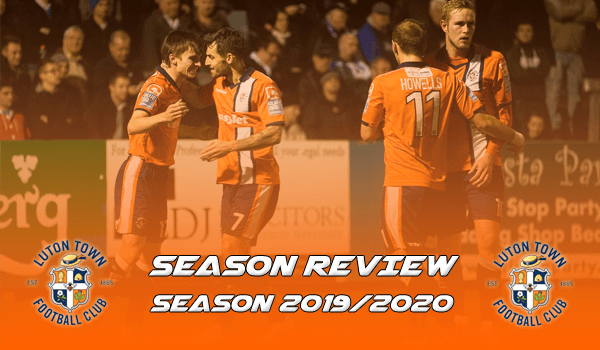 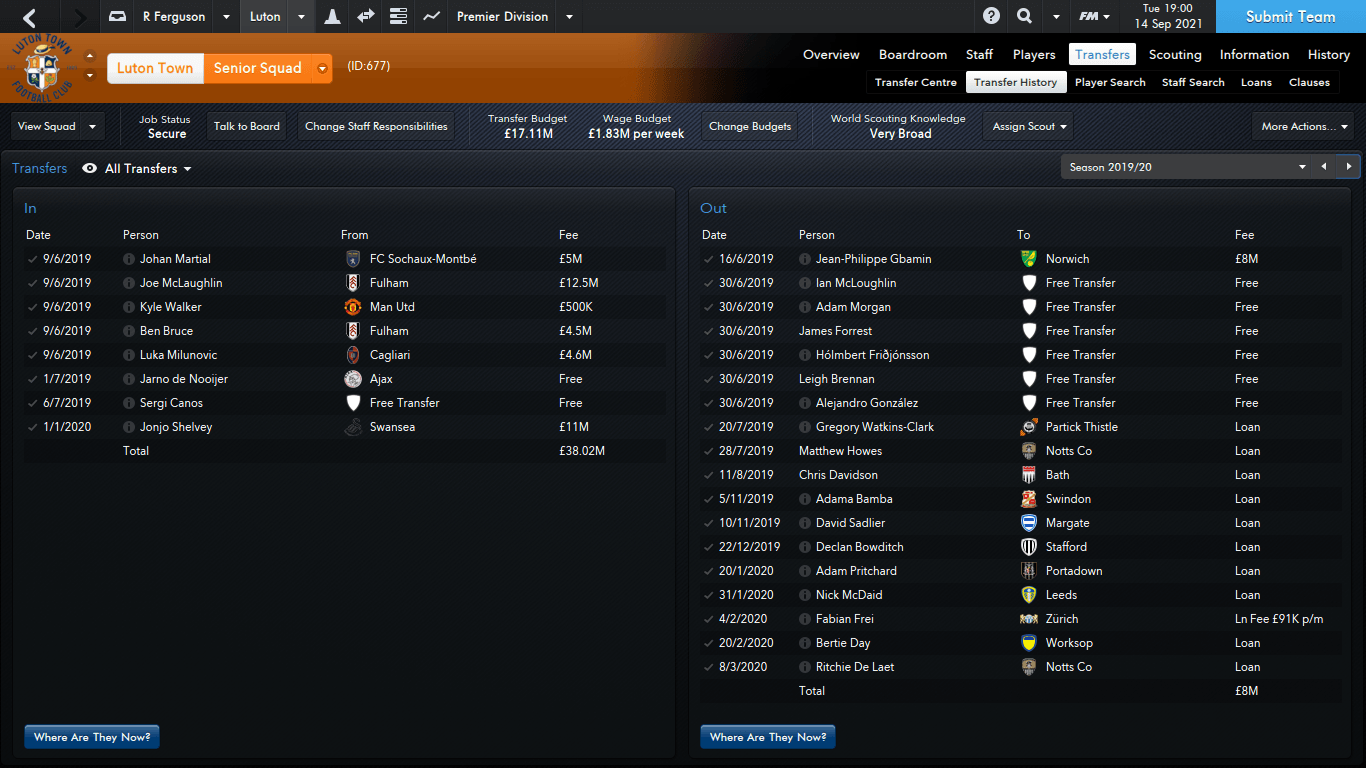 One player left for a transfer fee, as Norwich purchased full-back Gbamin for a large £8M. His replacement was among the eight signings which we made in Kyle Walker, who joined us from Manchester United for just £500k. Joe McLaughlin and Ben Bruce are two very exciting English prospects and Bert de Nooijer is a very talented Dutch goalkeeper. I'm pleased with the signings which I made this season. We spent quite a lot of money but the players we brought in are worth their salt.

We were quite inconsistent during the first half of the season but we really settled down and found ourselves go unbeaten in 23 league games from December to May, unfortunately conceding defeat to Arsenal on the final day of the season. However, we did show some remarkable improvements over the course of the season and indeed in contrast to last season. 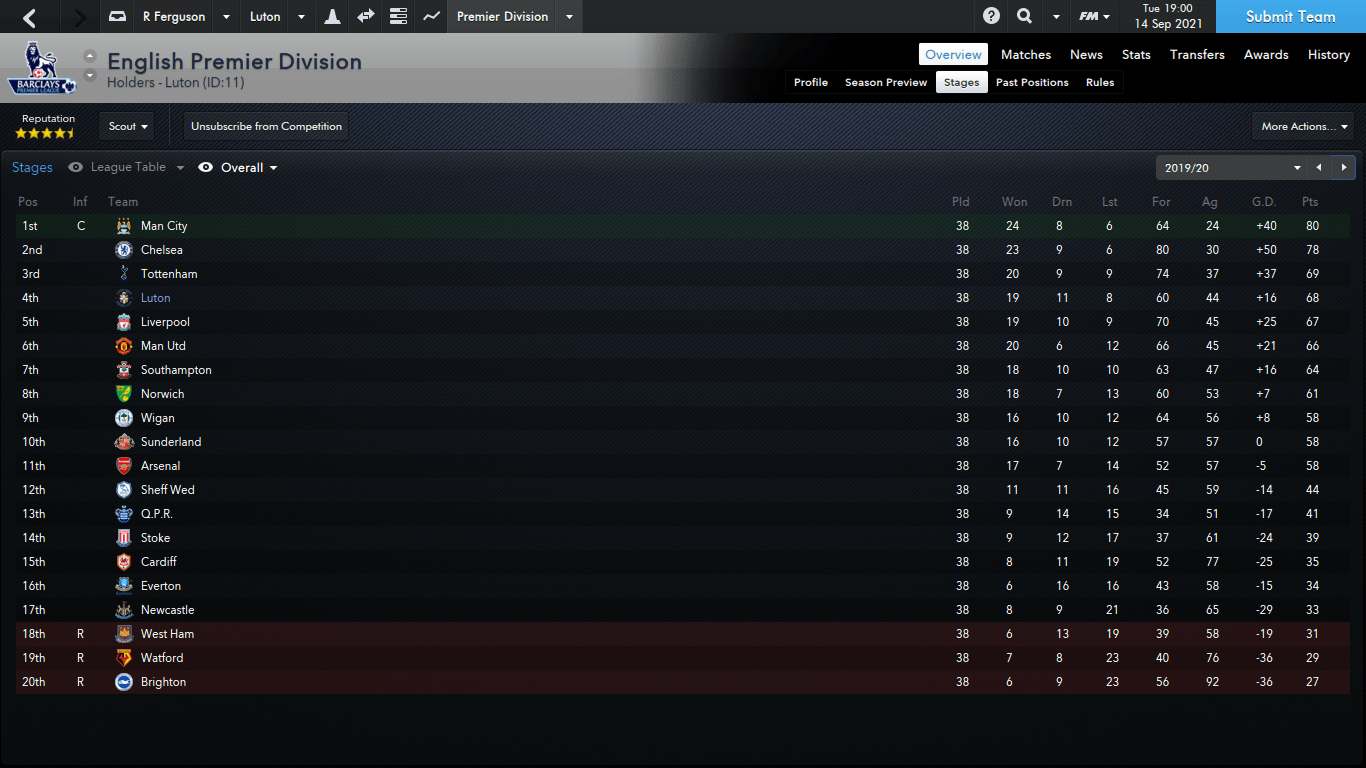 We finished fourth! Our form during the second half of the season was good enough for us to rise up the table and in to a Champions League spot. We were very strong in attack and in defence and we got a fair reward for playing some fantastic passing football. Only one problem though; we got kicked out of the Champions League for failing Financial Fair Play regulations by a very, very narrow £200k. This was very disappointing for us as we would have benefited so much from European football. However, we just have to move on and celebrate our victories and rise through English football.

Our cup form was just as impressive as our league form and we reached the final of the FA Cup. However, two Manchester City penalties dispatched us and we had to settle for runners-up spot. I'm delighted with our run in this cup and hopefully we can go on to win it in the coming few years. 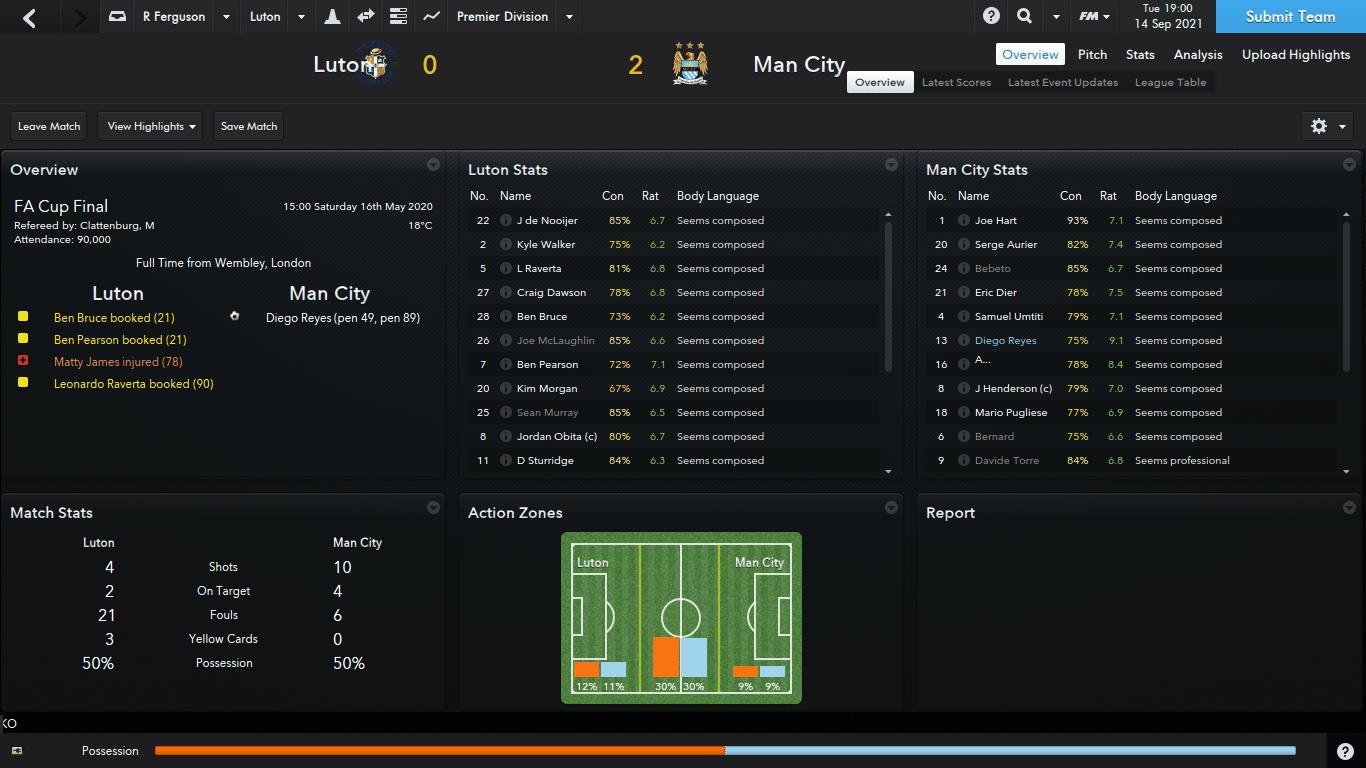 We did well to reach the quarter finals but Manchester City, unsurprisingly, knocked us out of the Capital One Cup too. We did well and I'm proud of the team.

Well, despite performing well in all three competitions, we have no European football to show for it. For some reason or another money began to come out of the club at incredible rates for
"Other" reasons. Whatever the chairman of Luton is doing, he just lost us Champions League football stupidly. Hopefully this won't happen again as we will suffer enormously.

Walter
5 years
Some great season reviews Justice, so unlucky to fail FFP - this chairman seems like a bit of an idiot >.<
1
Login to Quote

bebero
5 years
A lot better than the previous season, I wish you much luck!
1
Login to Quote

Just to clarify, we did not get CL football because we failed FFP. Please refer to the update where I explain everything. 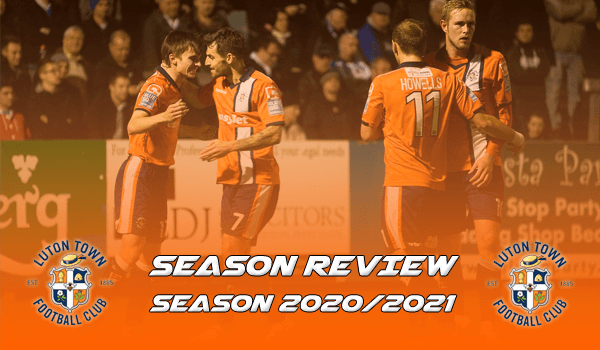 After we failed FFP and had our Champions League spot revoked (conspiracy perhaps), we couldn't afford to spend any money on new players. This also spelled the end of very unsuccessful Luton careers for Luka Milunovic, Lloyd Jones, Fabian Frei and Shaquile Coulthirst. It also meant that Luton Town legend Euan Smith pre-maturely hung up his boots as his career went down the shitter courtesy of Michael Appleton's dreadful influence on his football. Luckily for us, two top players were available on free transfers; Maximilian Meyer and Angel Correa. Meyer had been released by Bayern Munich and Correa had been released by Dortmund, both due to conflict with managers. Luckily for us, they accepted relatively low wages and we had two superb attacking players in our line-up to hopefully push on and get in to European contention once more, while hopefully passing Financial Fair Play regulations this time.

Despite a relatively inconsistent October, we went in to January with just one defeat to our name. Big wins away to the two Manchester teams were the highlight of the first half of the season, while a 7-0 thumping of Sheffield Wednesday shouldn't be forgotten any time soon. We suffered two more losses between January and May, at the hands of Man Utd and Sunderland but we picked up some massive wins, including a 6-2 win against Man City, 5-1 against Everton and 4-1 against Liverpool. Angel Correa and Maximilian Meyer played key roles in a lot of our wins and at times, won us points on their own. Combined with Premier League veteran Daniel Sturridge, we had a very formidable attack. Our record in the league was 26-9-3, which is champion-material. Was it good enough to win the league? 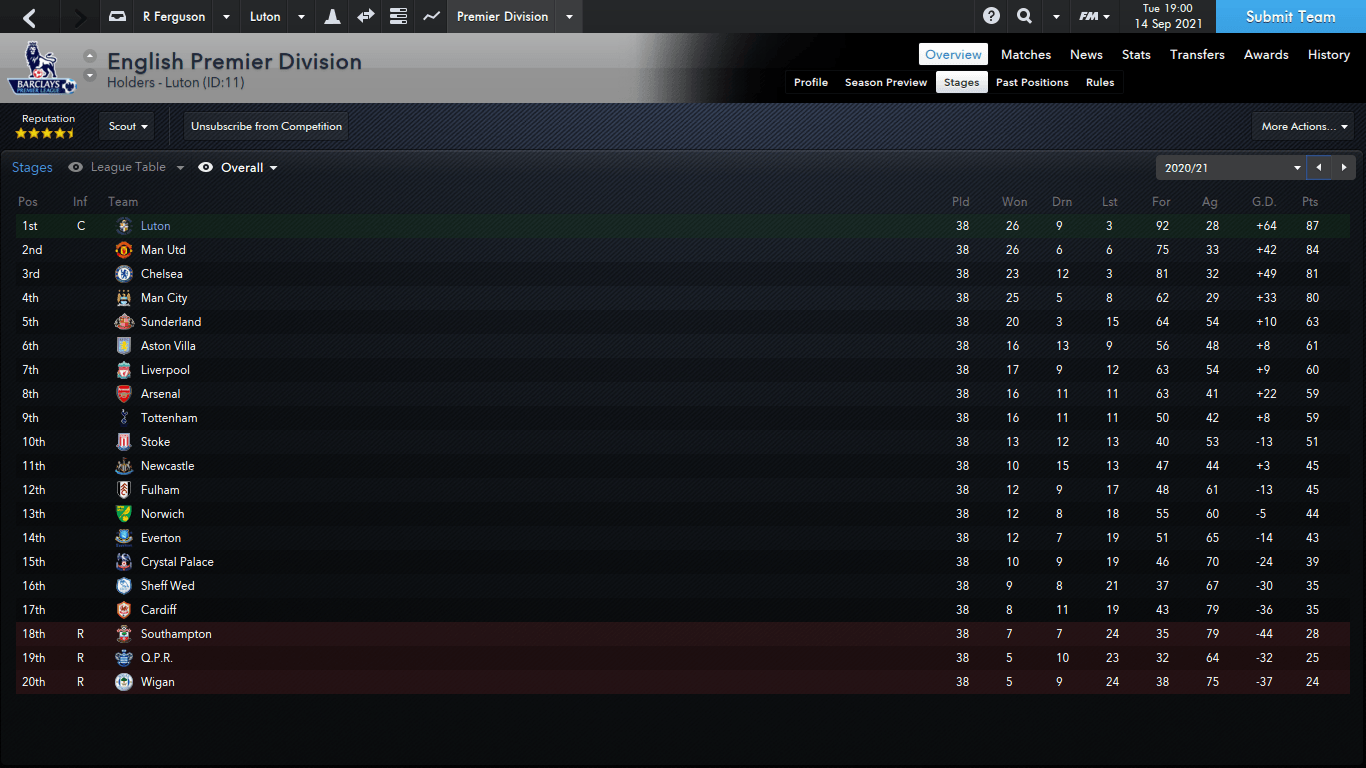 Yes, it was! It came down to just three points between us and Man Utd but we did win the league! Our goalscoring ability was far superior to everybody else in the Premier League and we also conceded fewer goals than anybody else. We can be very proud of being crowned Champions of England as we certainly deserved it this season. Perhaps the lack of European football went in our favour, who knows! We had a lesser squad compared to our title-chasing rivals but we topped them all in the end, a superb season all-round!

It was not just the Premier League which we won this season as we got our hands on the FA Cup too! I won't lie, we were extremely fortunate with our opponents as we never had to play another big team once during the course of the competition. Meyer and Sturridge paved the way to cup success with their goals, notching nine between them in the FA Cup this season, meaning we have won the double! I don't want to be harsh of Cardiff but we really did put them in their place in the final. Well, we didn't win the treble but we were unfortunate to be knocked out by a lottery of penalties away to Leeds. I would like to win this trophy in the future to add it to my collection but even if I don't, I'm delighted with what I've already won. 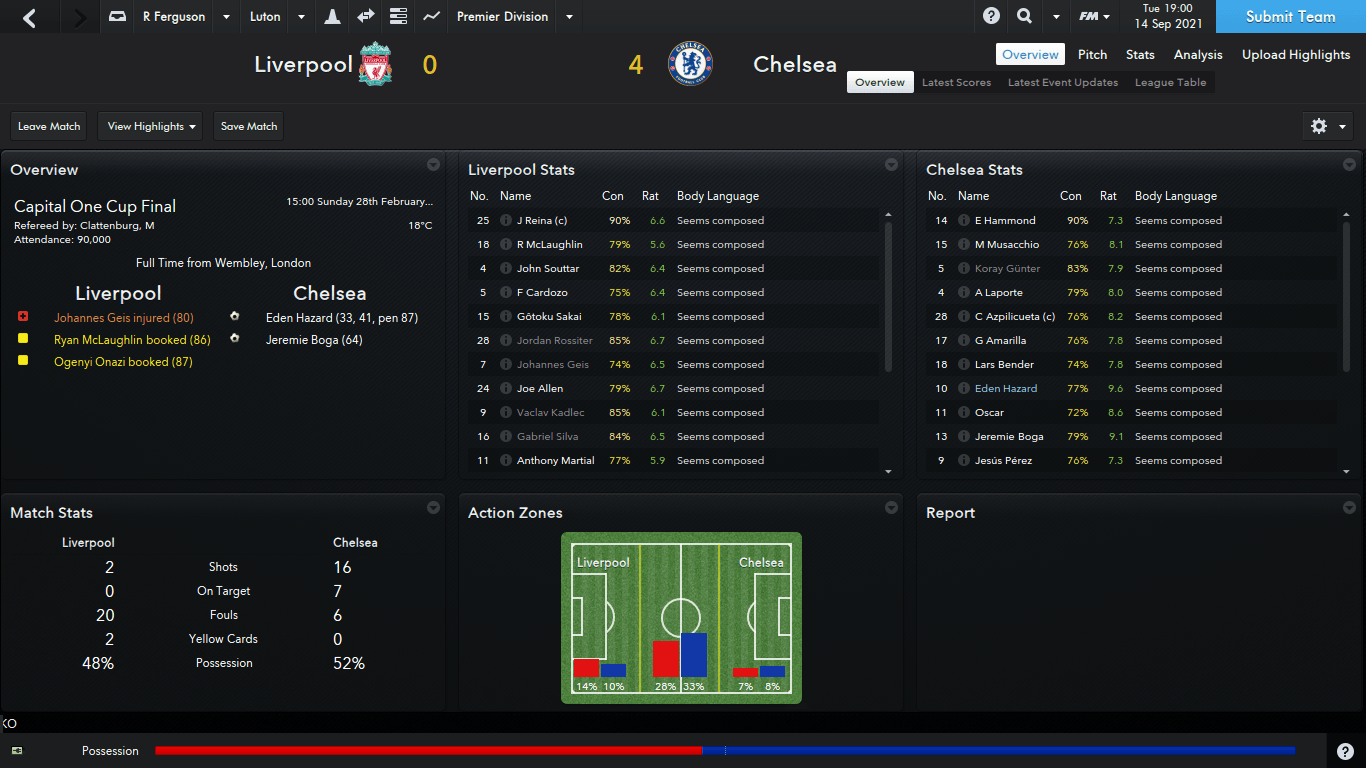 So we won the double this season! Yes, we did qualify for the Champions League and we did pass FFP this time, which means European football is coming to Kenilworth Road next season! I have just one more season to review before I'm fully caught up with where I am in the game and I will be looking to inform you of the 2021/2022 season as soon as possible. We are Luton, Champions Of England!

pokarioboy
5 years
Alright, so I need to learn how to read. I did make sure I read all of the update so this time I can finally say. Congrats on CL football! And very well done with the league and FA cup! Really nice update 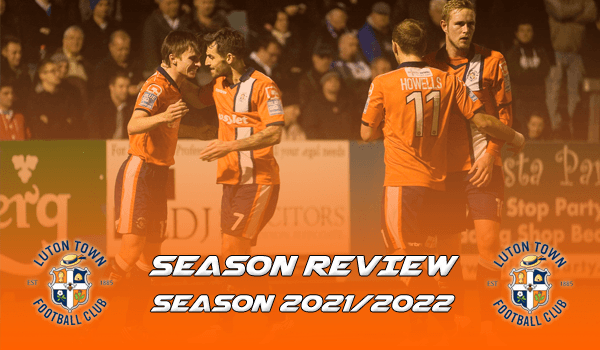 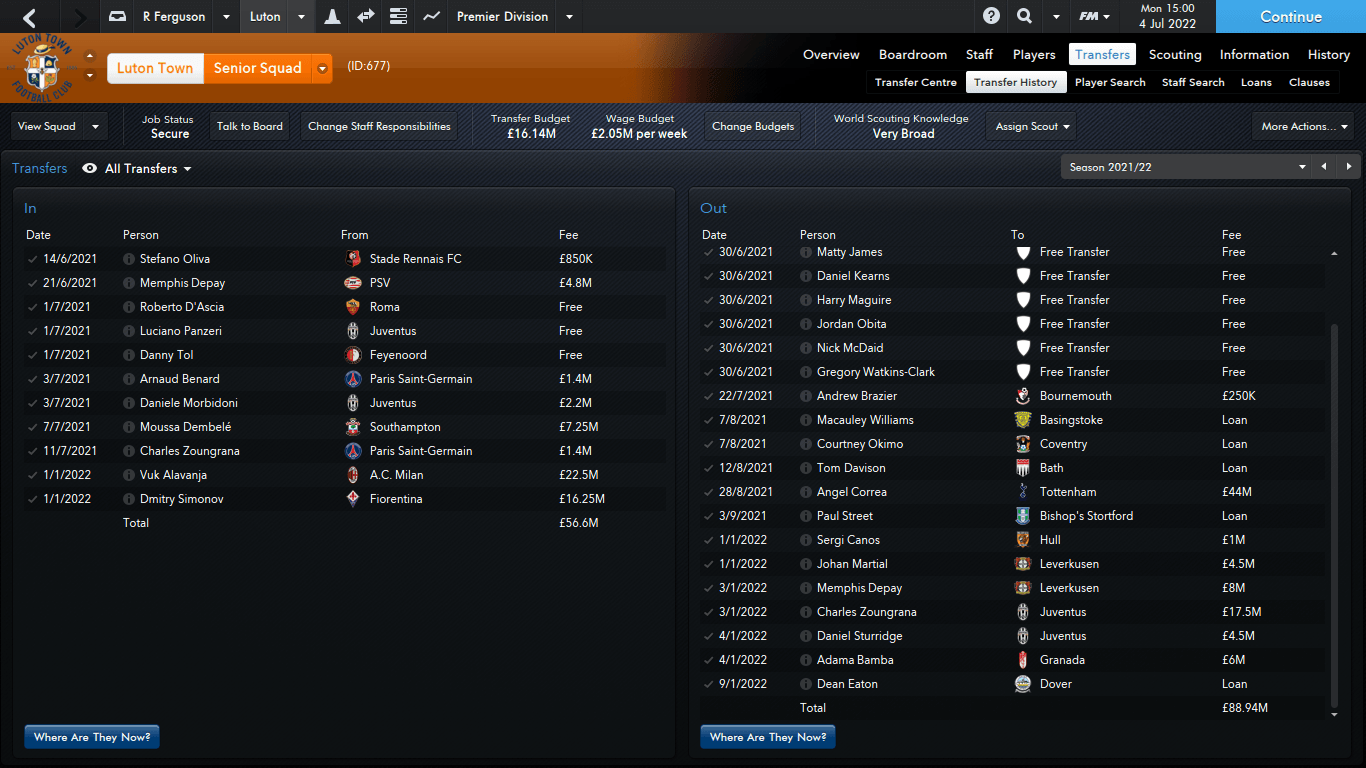 With Champions League football now guaranteed and our financial security safe, we could now begin to invest heavily on improving our squad. Apart from Oliva (youth player), all our signings in the summer were to fill up our first-team squad. However, Spurs then came in with a £30M bid for Angel Correa. I successfully negotiated the deal to £44M up front with £2.5M after 10 league goals, which I think is a marvellous deal. I decided to keep the Correa money in the bank for January when I would know for sure where I needed to invest in the squad. Sure enough, I needed to improve my defence and midfield and in came Alavanja and Simonov for big-money deals. Depay and Zoungrana only lasted half a year at Luton as big bids came in for them, while out-of-favour Sturridge, Martial and Bamba also found moves to go elsewhere. I'm delighted with our transfers this season. We made a profit of over £30M and although we lost a world-class player in Angel Correa, we did make a £44M profit on him. We might suffer by not having Correa but the team, as a whole, looks much stronger.

We had a shaky start to the season but a seventeen-game unbeaten run between November and the end of February helped us to settle in to our natural game and we were picking up points left,right and centre. Highlights of the season include beating Man Utd twice, a big win at Swansea near the end of the season and a thrilling 5-4 win against Liverpool in January, one of the greatest games in Premier League history. A league record of 28-6-4 is one to be proud of, but was it enough to retain the league title? Unfortunately it was not enough. In the end, we may not have had the fire-power to match Manchester United as Ole Gunnar Solskjær's side stormed their way to a 21st league title. United won the league by five points, which displays how well they played through-out the season. While we dropped one place from last season, we earned three more points than we did last season (87), so we have reason to celebrate. Not many teams earn 90 points but don't win the league, I guess we were unfortunate that Man Utd played so well this year. Hopefully we can make another title challenge next season.

Our Champions League campaign, unfortunately, did not extend past the group stages as we failed to win a single game. We were drawn in a tough group alongside AC Milan, Barcelona and Dnipro. We drew four games and lost two, which saw us plummet out of the Champions League. However, as we finished third, we qualified for the knock-out stages of the Europa League. Just like our Champions League campaign, our Europa League campaign failed to take off as we were beaten in the first knock-out round by PSV of Holland. They showed great European experience, which we lacked, as they scored goals against us in both stages. 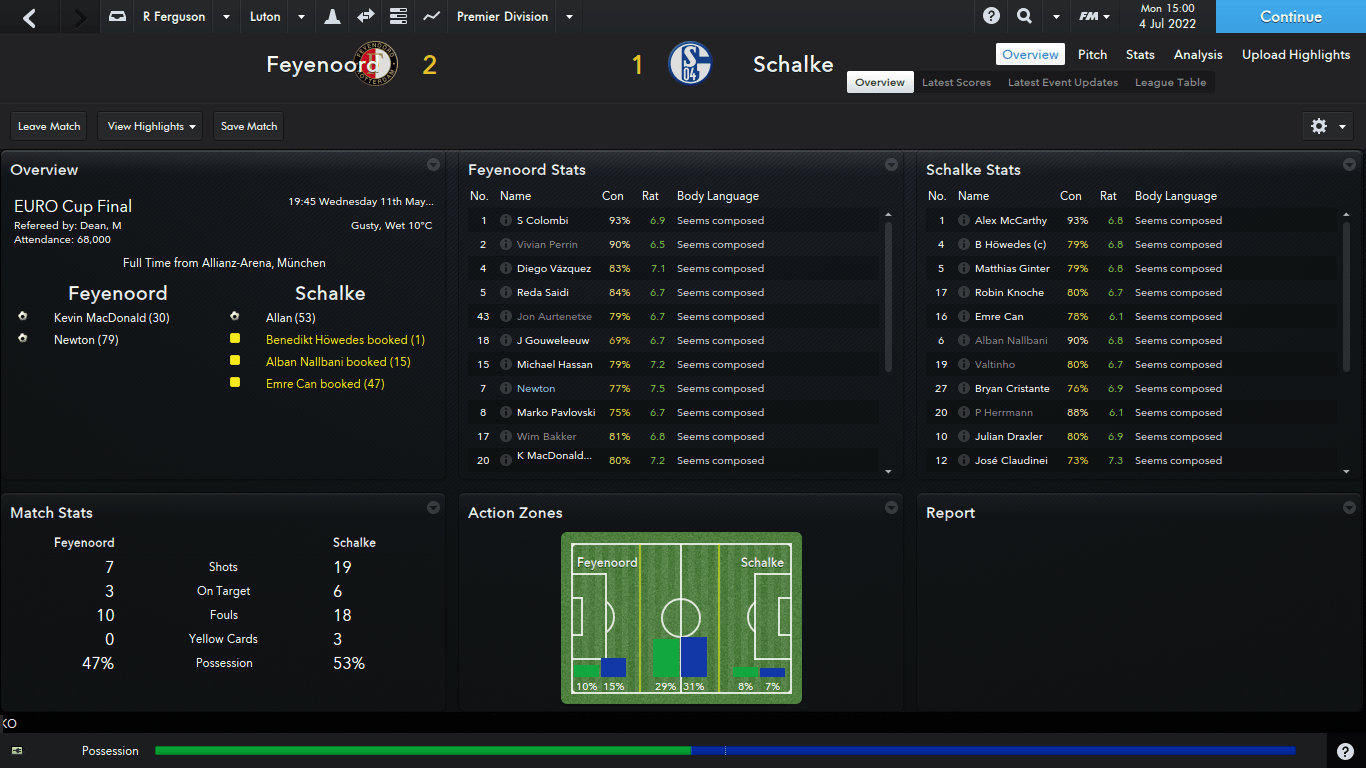 Compared to our European campaigns, our FA Cup run was extremely successful. We did make it to Wembley once again, although only a semi-final this time as eventual champions Chelsea defeated us. 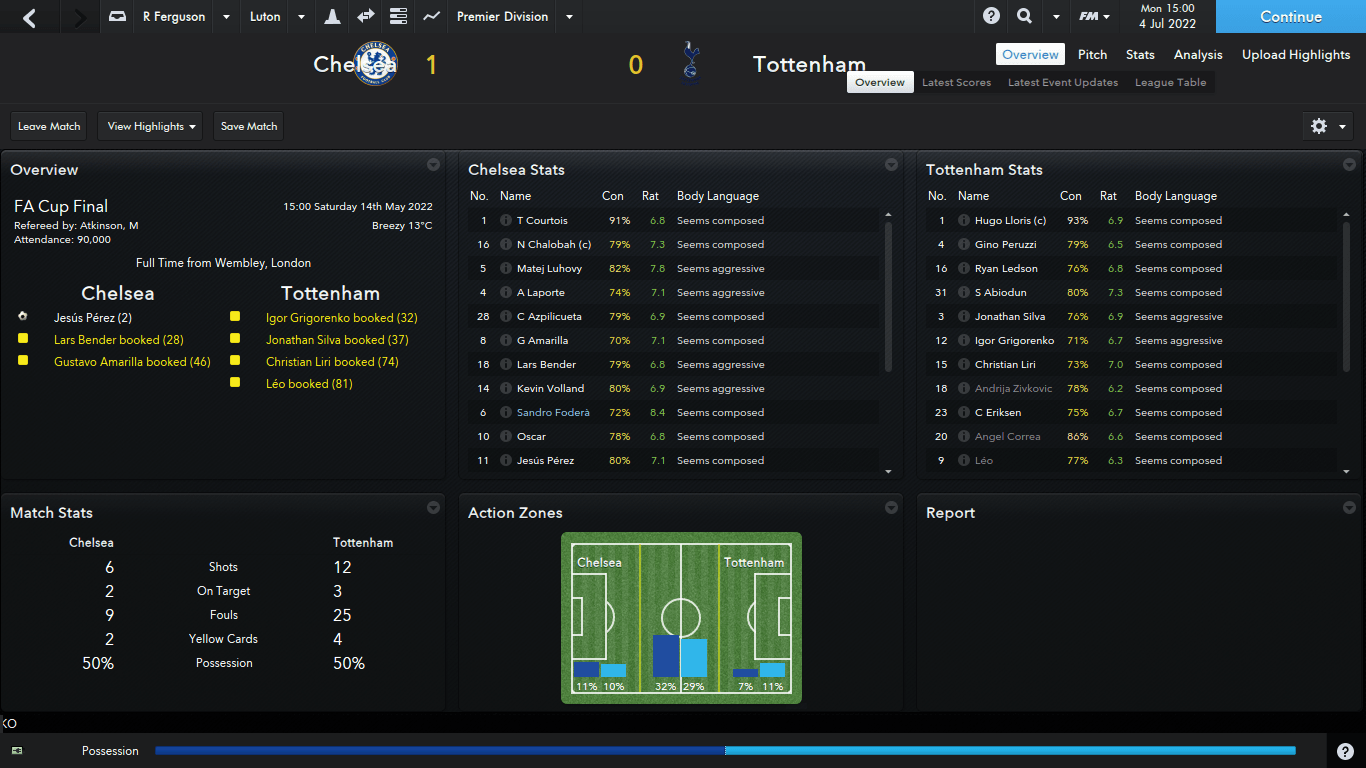 We performed well in this cup to reach the quarter finals but Manchester United stood firm at Old Trafford to knock us out in extra-time. So we didn't win any trophies this season, despite coming very close. We keep improving each year, which is always a good sign. Now that I've finally caught up with my save, I can now post updates on each month, rather than each season and I can now add a bit of fiction too! Thanks to everybody for motivating me to bring this back, especially Neal & Walter who kept pressing me to continue to write up this save. Keep posted for more Path to Power!