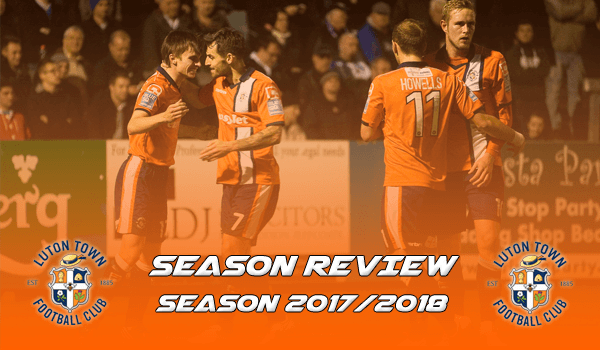 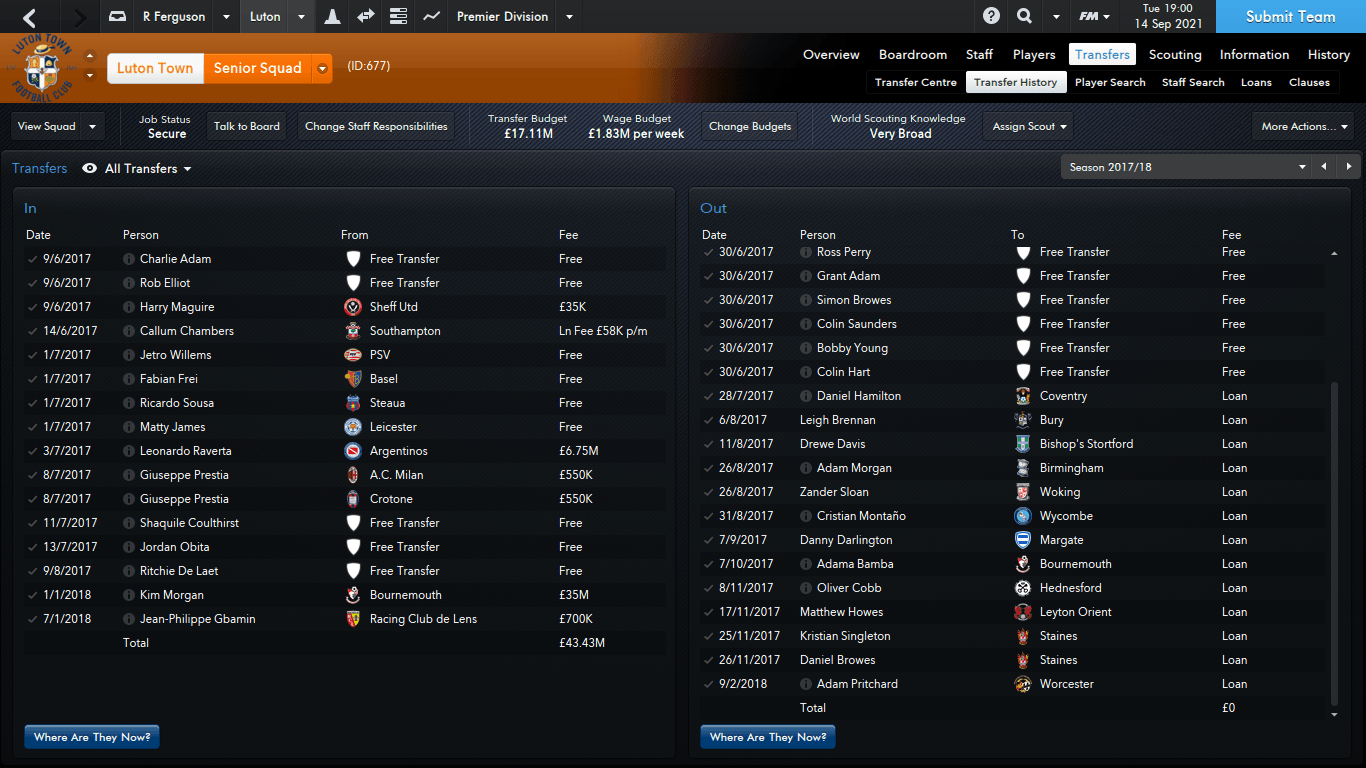 In our debut Premier League season, it was important that we invested in a squad which could help us survive and we spent over £43M doing so. However, £35M of the total was spent on a 17 year old Kim Morgan from Bournemouth, who looked to be the best up-and-coming player of his generation. Unfortunately as I am quite a long way ahead of this story, I only have a screenshot of Kim Morgan and that is from before he signed for us. Overall, I was fairly pleased with the signings I made. I brought in a lot of experienced players to hopefully help our cause. Let's see how we did! 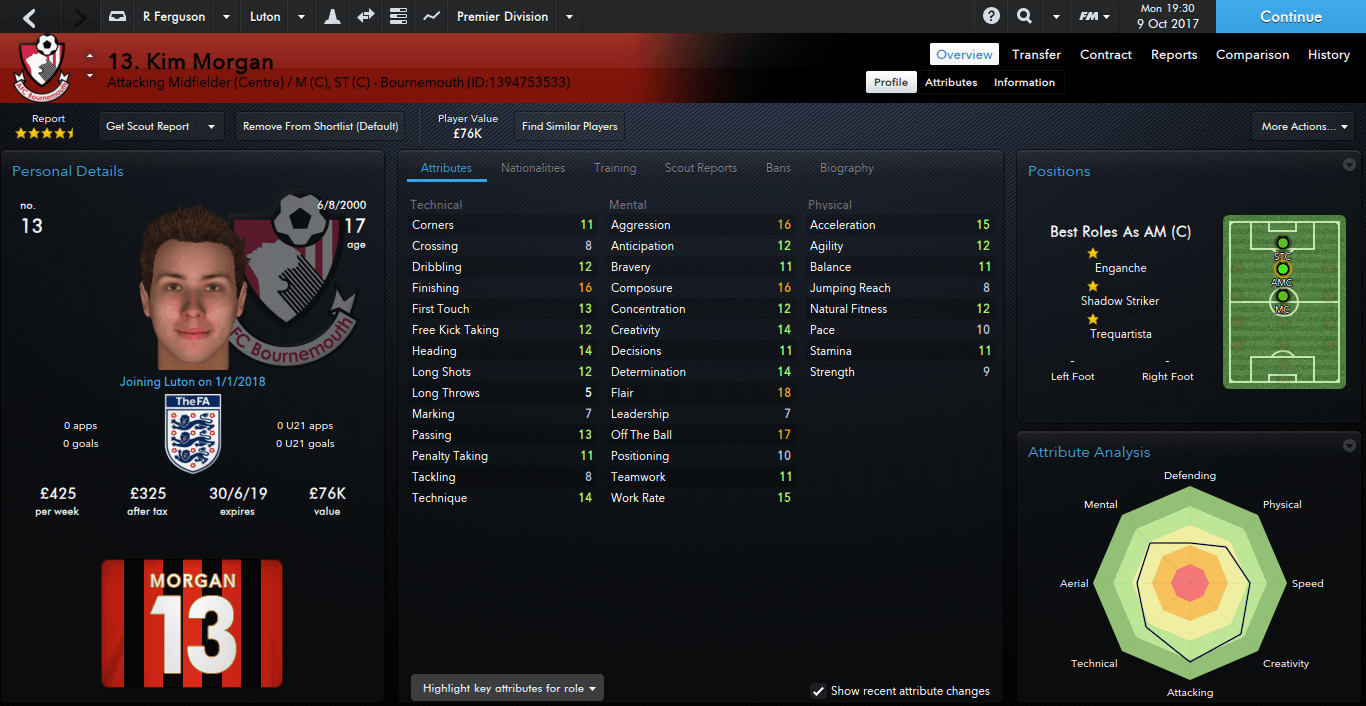 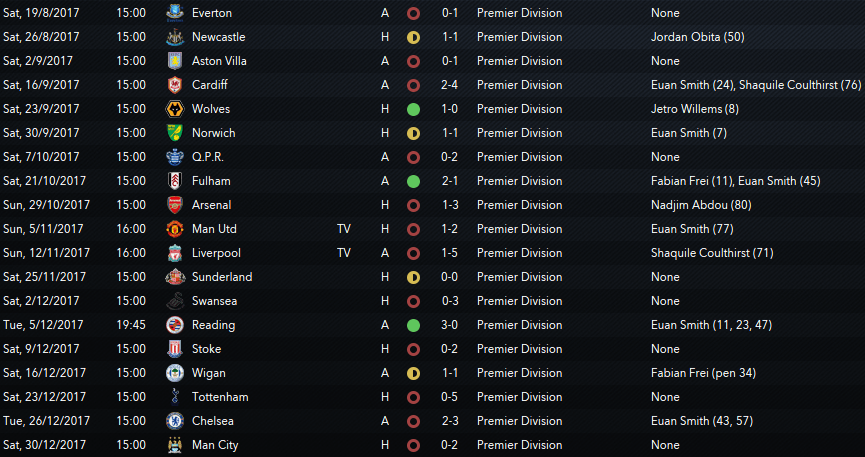 It certainly was not pretty as we lost games left, right and centre. If there was ever a bright spell for us, it was in January where we picked up eight points, which made a massive difference to our season as you will see in the league table. 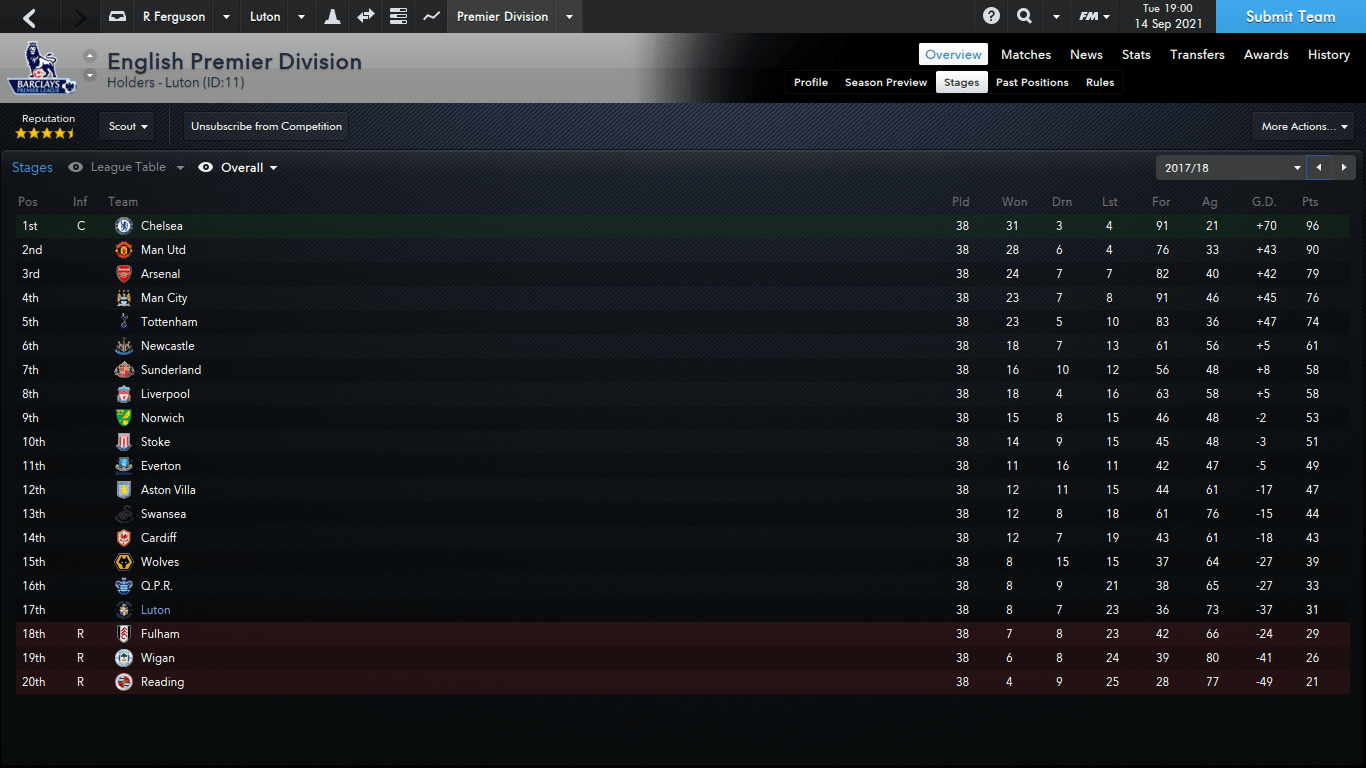 I genuinely don't know how we survived but we did! 31 points is the lowest a Premier League team has gathered over the course of the season yet surviving the drop. We were put to the sword so many times and we were incredibly lucky not to be relegated back to the Championship.

Despite some late drama in a thriller away to Birmingham, penalties saw our early demise in 'The Cup Of Dreams'. In a season where we struggled to find our feet, it was no surprise to see us exit the cup early.

Nobody expected a Premier League club to be defeated by Crewe but we were hammered in extra time and we can only blame ourselves for the defeat. It was disappointing, to say the least.

Another season gone, another year of memorable football in the history books. We survived this season but how would we do in the following season? Stick around to find out!

Walter
6 years
Narrowly survived, which is great! Great to see this story back Justice

pokarioboy
6 years
Thank god for the survival. Next season a mid-table finish

Really good story as well, loving it
1
Login to Quote

captainbrickarms
6 years
That was too close!, that wonder kid just looks amazing!
1
Login to Quote

Zed
6 years
Phew, that was close! Nice to see this story back!
2
Login to Quote

pompeyblue
6 years
YES! This story is back for real

Great season reviews so far, congrats on staying up but hopefully now you can push on and become established in the Premier League

Justice
6 years
pompeyblue, hopefully we will push on

So after my fifth season in charge of Luton Town, I was sacked by the new owner in order for a Scottish manager to take charge. Michael Appleton took the reigns of my club, which puzzled me as he is not even remotely related to Scotland, which is not the point. So while I was brooding over my exile from Luton, Michael Appleton stole my transfer targets list which I had already given to my assistant manager and he bought the following players:

I would like to take credit for these players joining Luton as I had made that short-list. Despite these good signings, Appleton went about the destruction of Luton by selling Luton's star players Jetro Willems and Ricardo Sousa for a combined fee of £6.3M, when they were valued much, much higher. Appleton's inability to build a team showed as his season started badly and ended worse: 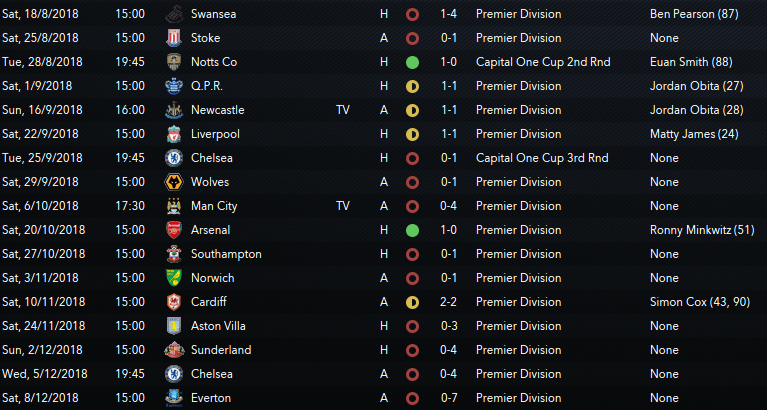 Michael Appleton's Luton career ended after the team's humiliation at Goodison Park. Rooted to the bottom of the table, the fans were calling for a hero to emerge from the ashes. They wanted Ryan Ferguson back in charge of their club. Eventually giving in to the demand, Tom Naylor brought back the man who he treated like dirt all those months ago, grovelling as he did so, and so continued The Path To Power. 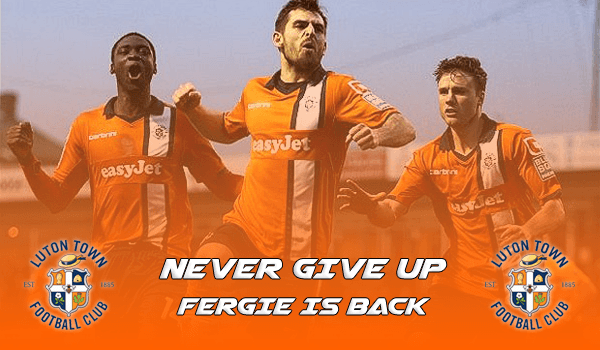 Griffo
6 years
Where are you on the league table?
Login to Quote 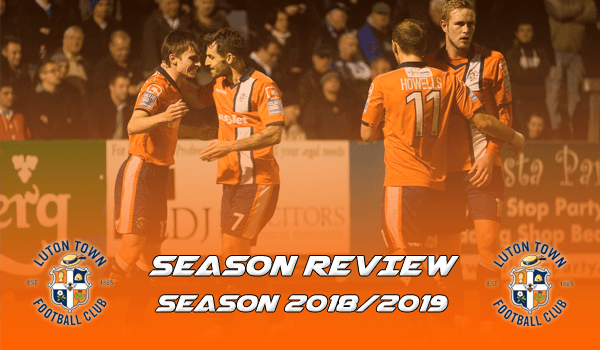 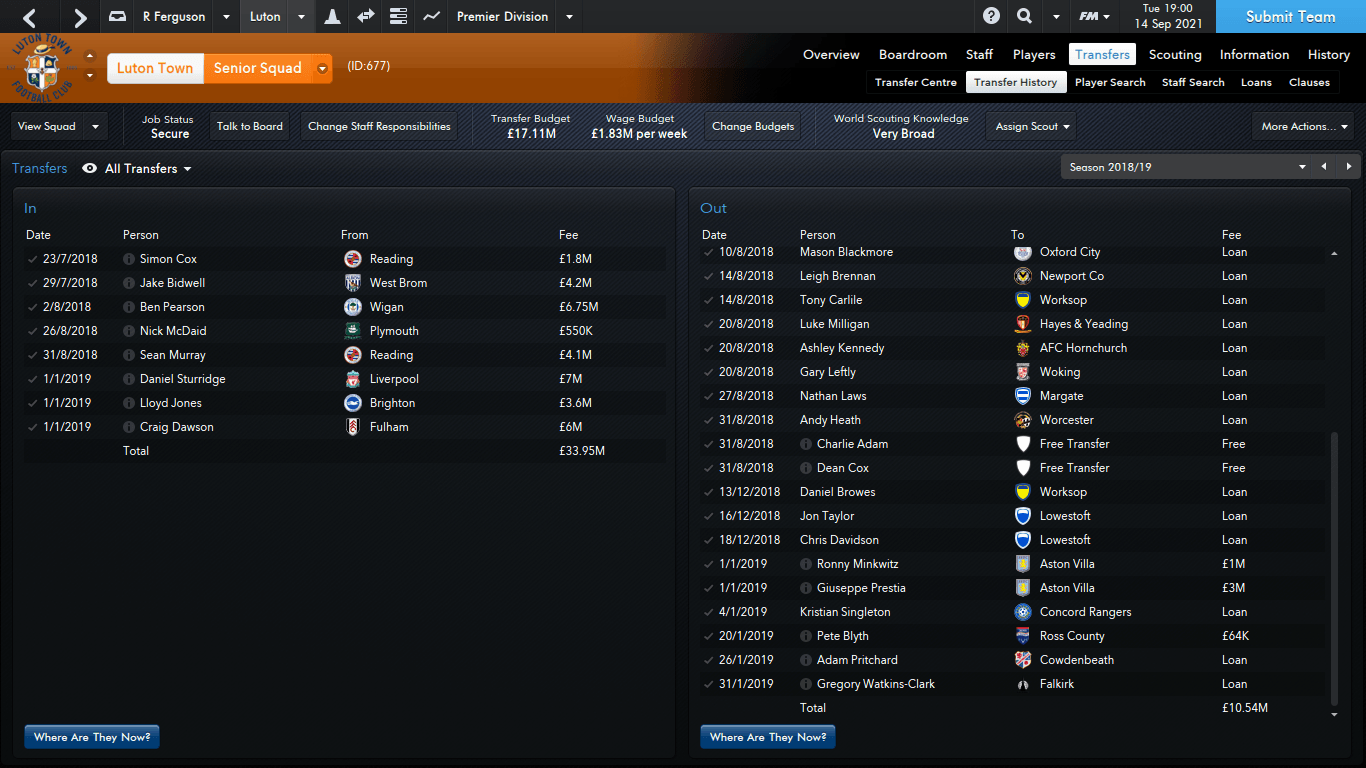 After the Appleton 'reign of terror', I needed to make some emergency signings. All transger made before January are Appleton's, all made after are mine. I was lucky enough to sign Daniel Sturridge on a relatively cheap deal from Liverpool. He had fallen down the pecking order with the arrival of Kadlec and the up-bringing of Jerome Sinclair. Along with the two defenders signed, I was ready to begin our quest for survival this season.

I think the difference between Appleton's reign and my reign is quite significant to notice. The difference is his team didn't score many goals, my team did. Our goals got us points and our goals brought back hope, happiness and pride. We were no longer the weakest team in the league; we became a team to be feared all across England. 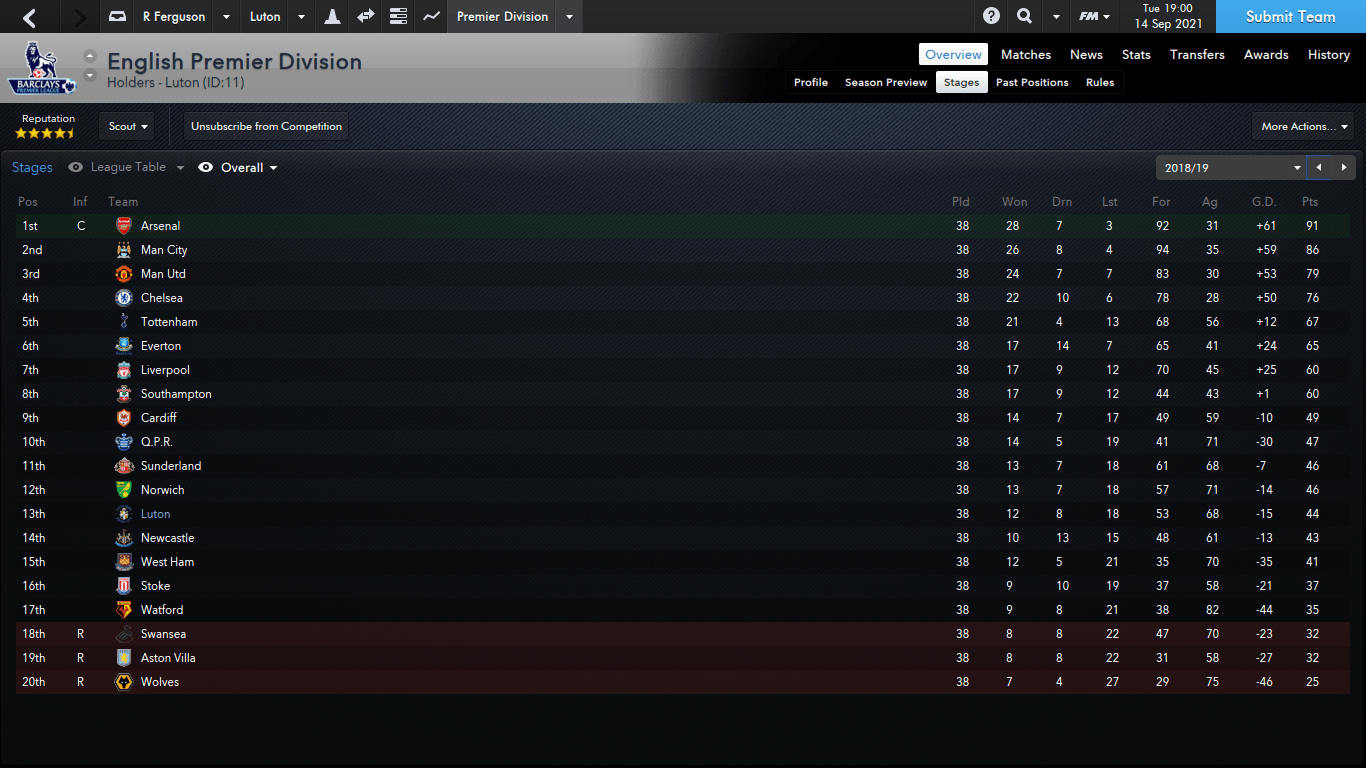 So where did our good second-half of the season put us? We finished thirteenth! We manages to put twelve points between us and relegation and place four places higher than last season. Appleton might have shot us down early on in the season but we showed true courage and quality to climb back up the ladder and out of the darkness. Daniel Sturridge is one of the main reasons for our survival, he is a truly inspired signing!

Luckily our FA Cup campaign began after my return to the club. We did well to pass two rounds but we were defeated by a Newcastle side which contained some of the best attackers in Europe at the time. We scored two good goals but we were over-powered in the end. I am proud of our performances in the cup.

Well, Appleton did manage to progress through one round, at least! However, Chelsea put Luton to the sword and that was the end of that.

Despite all the turmoil that the club had gone through, we are back on our feet and looking to push on in the future seasons. Can Fergie's army claw their way to the top? Let's find out soon!

bebero
6 years
Many transfers, and many games in which I think you had bad luck! Maybe next season will be better!
1
Login to Quote