Jer
6 years
How could've he missed the opportunity to score at Estadio da Luz whilst being a lowe Portuguese team!
Login to Quote

Walter
6 years
Carlos Thanks mate, same can be said for you!

fzemdegs Thanks mate
Login to Quote 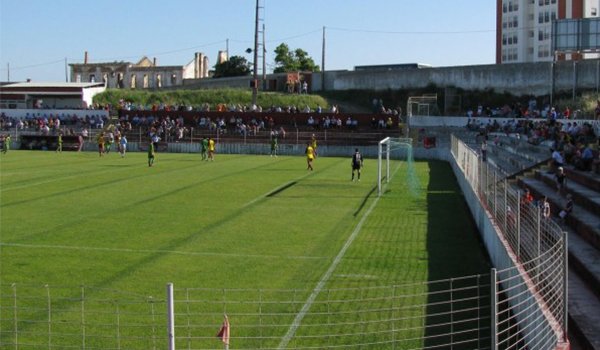 Oriental closed out the season strongly

We started off January with the game against SL Benfica. As I had a full length report on the match in the previous update, I'll keep it simple here. We were drawn against the Portuguese giants and fought out a tough 2-0 win, which was fine by me. This means our attentions can be focused solely on the league and getting promoted!

Ironically, we played a different Benfica in the shape of CF Benfica only a matter of days later. It was a short trip away and we were extremely lucky to win. We only managed to score once and we were tested several times. If it were not for the penalty heroics of Tiago Mota it would've been 1-1, but his acrobatic save from the spot kick ensured we came home with all three points.

The season was to finish on a much easier note. Sporting Ideal had taken around about 12 games to notch up a win. Away from home we managed to brush them aside 4-0, but this time we didn't exert our true quality, and we finished the regular season with a comfortable, albiet soft 2-0 victory. 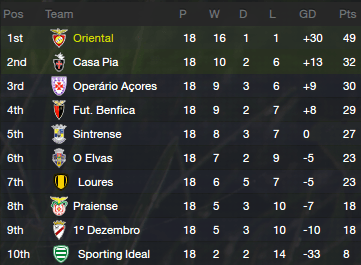 To conclude, it was a marvellous regular season. Only dropping points to Sintrense and Casa Pia was phenomonal and we really have shown that we are one of the favourites to go up to the Second League!

We finished a whole 17 points clear of second placed Casa Pia, and that helps our cause as we take 50% of our points to the promotion stages (I believe), and that will give us a resounding advantage in the Promotion Stage. 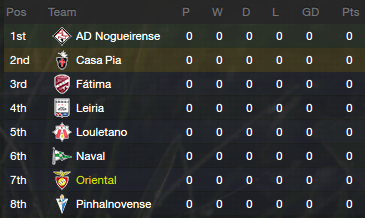 There is no doubt we've been a harder group than what I would've liked. Teams like UD Leiria and Naval were both once in the Primeira Liga before financial issues got to them both respectively. Fátima are always tough and the rest I'm not so worried about them, but hopefully we can get out of this group without going through the dreaded playoffs that second place would bring!
Login to Quote

AlexTHFC
6 years
Very nice update, promotion should be a piece of cake!

fzemdegs Oh no I shan't

AlexTHFC Thanks, but I don't think it will unfortunately :L

100th reply open to anyone who wants to take it...

LFC
6 years
Great 0-4 win, and a great update! Keep up the fantastic work

Walter
6 years
fzemdegs lol you got it anyway!

LFC Thanks mate, appreciate it

The Hound
6 years
Some nice results, hopefully you can keep it up and secure promotion!
1
Login to Quote