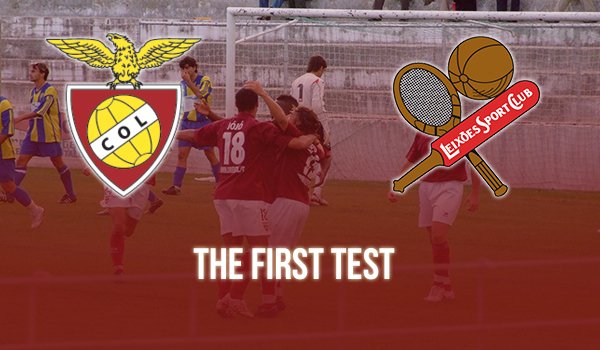 When I came to this club, I knew there would be challenges, I had to expect that. From day one I've put all my effort in to ensuring that my players share that same drive and attitude I have when going into games, no matter who the opponent is.

In my opinion, being drawn against Leixões is one of the best things that can happen for us. Not only does this give us some much needed money from the tickets sold, but it also gives us a chance to showcase our talent on a broader stage and shows us how good we really could be.

Leixões are not one of the most famous clubs by any means. In fact they aren't even in the Primeira Liga. That is not an issue for me, as I still think this draw is the perfect one. There is no way we're going to adopt a defensive approach for this game, we're going to play to our strengths and see what we can do.

I am confident about my team. We have a good squad, and we have a good team spirit about us and they are the two most important things for a team, in my opinion. We will go out there tomorrow, play our game and come home with a result that I know will please the fans - we will play with our heart on our sleeve and show Portugal who Oriental Lisbon is!
Login to Quote

Neal
6 years
A chance to test yourself against a bigger team! Hopefully the boys get out there with some passion and perhaps upset the odds a little bit. Good update, love this so far

In my opinion, being drawn against Leixões is one of the best things that can happen for us. Not only does this give us some much needed money from the tickets sold, but it also gives us a chance to showcase our talent on a broader stage and shows us how good we really could be.

Broader stage meaning less fans than a league match because tickets are too expensive for cup matches?

Carlos Oh god, that makes me look a little stupid doesn't it!?

What can I say?! We played our game - and we won! This was an amazing run and I hope it is the start of something special. We truly deserved to win this game especially in the way that we won it. I truly never saw a win like this on the cards - it is a magnificent result for all of Oriental Lisbon.

There wasn't much to see at the start. Bruno Alves' injury for them may have played a role but I'd still like to believe that we won this because we were the better team, which I think we were.

It was Balack who got us to the great start by firing the ball home in the 24th minute. In all honesty I was actually quite surprised but I knew it wasn't over yet. We continued to grit it out, winning the ball in midfield and sending in crosses from Tiago Mota.

Things were made a lot easier ten minutes before the break, with Hugo Grilo's thumping header hitting the back of the net with force. Our fans were sent in to raptures! Was this to be?

I warned the players about complacency at half time. I couldn't let them go out at half time with their heads in the clouds, it'd be embarrassing. Something must have rubbed off, however, as Figo, the Cape Verdean namesake of the ex-Inter player, fired home a third.

I couldn't believe it! How was this possible?! By now Leixões had just lost all confidence and we dominated. Our performance was capped off by a marvellous finish from Sebastiao Nogueira, who rolled the ball home - it was the icing on the cake!

The boys truly deserve this win. They played with pace, energy and drive and always looked like they wanted to win more than their Second Division counterparts. This was a brilliant result for the club as a whole, I feel now we could definitely catch some people's attention, this was just the first test - there is a long way to go, but I believe that this is only the beginning.
Login to Quote

Justice
6 years
Congrats on the win, and nice graphic!

Justice Thanks Justice, the graphic is inspired by yours, so you can take some credit

Louis O.
6 years
Not here for a couple days and I miss this...
Login to Quote 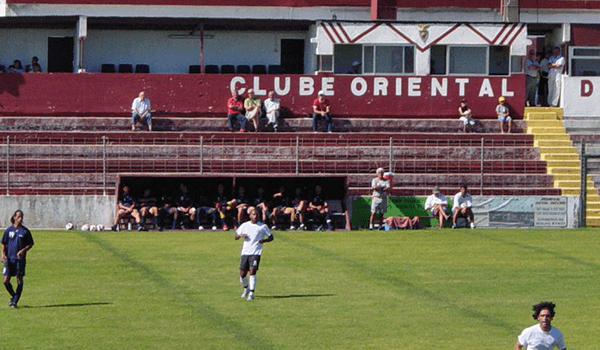 Oriental enjoyed a comfortable start to the league season

The league fast approached and we needed to get off on the right foot if I was to meet certain expectations. First off, we travelled away to Praiense, an underestimated side. We ran away with it to get three points on the board and three vital away goals, which is how sides that are even on points are separated.

Our first home game of the season began at 1o Dezembro and we raced to a 3-0 lead before letting in two sloppy goals. Despite this, we got our second win on the trot, keeping our 100% record intact.

We were on the road again for our third matchday of the season - this time to Sintrense. We utterly dominated the home side, an emphatic 5-1 scoreline was the end result - a big morale booster. O Elvas were next and as hosts, we exterted our home pitch advantage by winning by a clear two goals to nil.

Next, we hosted Leixões and as you all know, we trounced them in front of our own crowd to prove that we weren't easy-beats. The month finished with a tricky away trip to second placed Operário Açores, and we prevailed luckily 1-0. 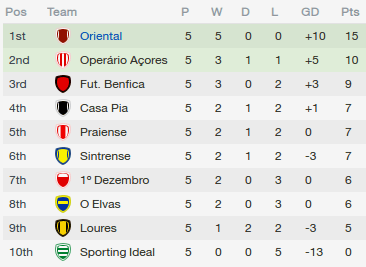 We sit pretty atop the table after five games with an 100% record! The win against Operário Açores could prove vital and the away goals which we scored are also very valuable as they could be the difference between places.

Casa Pia is the only real tough game for us next month, as well as the mini-derby versus CF Benfica. The other games should be quite alright considering the form we're in and the cup game could be another chance to get another win under our belts, which could do morale no harm at all!
Login to Quote

Neal
6 years
Amazing month to start, keep it up mate!!
1
Login to Quote