TJ7FFC
5 years
WOW! JUST WOW! This story is one of my favourites on here and inspired me to sign up , the story is fresh inventive and has an amazing layout , keep up the good work

Aaron
5 years
Even still, you're smashing this out of the park!

Jesus I wish I could do this... D:
Login to Quote

Thanks a lot, pal. I appreciate it and welcome to FMScout 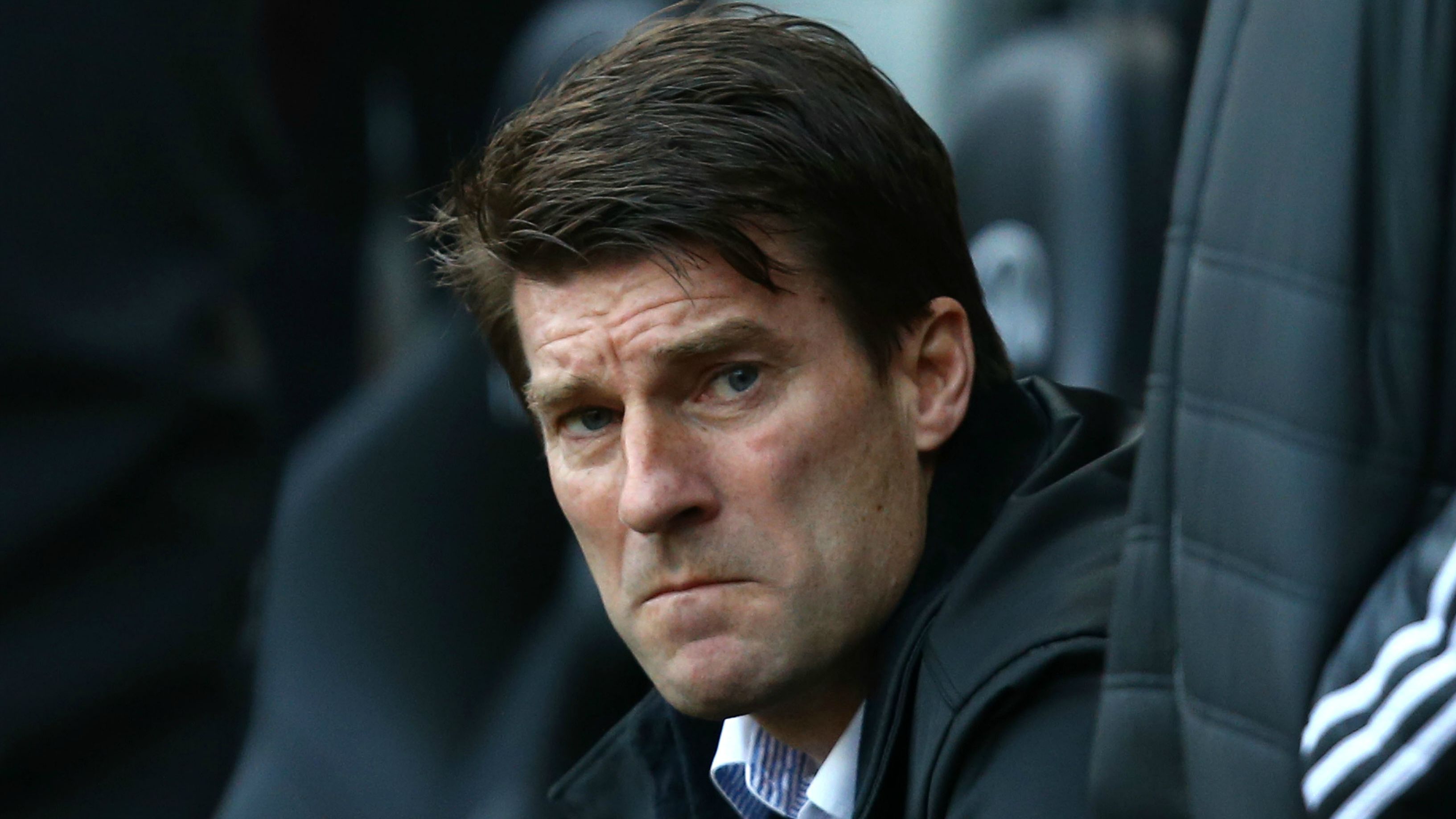 Liverpool boss Michael Laudrup has slammed the Premier League for allowing the Reds to play two games in three days.

Liverpool were in action on Sunday afternoon versus bitter rivals Everton and, much to the annoyance of Laudrup, had to face Stoke City at home on Tuesday night for the Capital One Cup fourth round.

Laudrup, who was forced to make a total of 11 changes to his first team, believes that television holds far too much power in modern football and that the Premier League is at fault for such scenarios.

”We live in an era where football and news is in demand more than ever, I understand that, but it’s very frustrating to see football teams being manipulated by television broadcasters,” stated the Danish manager.

”For a team to play a huge match like we did on Sunday, and then to play again on Tuesday isn’t acceptable, especially when we could have played on a Saturday.

“What were we meant to do on the Monday before the Stoke City game? To train on tired legs or rest without preparing for the game? Luckily, we progressed, but as you can see it went all the way to the lottery of penalities.

“Football isn’t just sport anymore, unfortunately - it’s a show. We all know that our game with Everton was moved to Sunday because it would match up well with the earlier game of Southampton v Manchester City. What may look like an ordinary coverage of football was served as a commodity, and it’s a shame that we nearly paid the price for it on Tuesday night.”

Liverpool return to action on Saturday versus newly promoted Leicester City, with John Flanagan’s fitness being the only worry for Laudrup ahead of the clash at the King Power Stadium.
Login to Quote 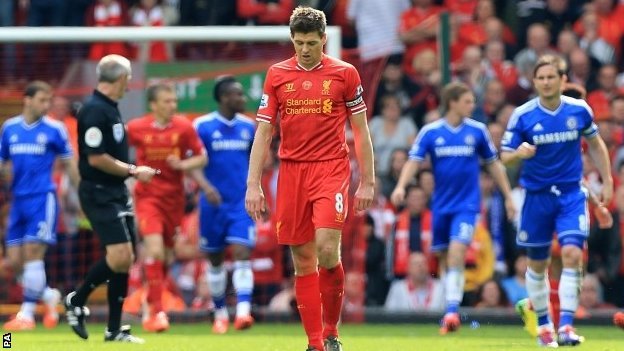 Liverpool skipper Steven Gerrard remains cut up about his mistake versus Chelsea last season which potentially cost the Reds the Barclays Premier League title, according to a close friend.

Gerrard’s unfortunate slip allowed Chelsea’s Demba Ba to score the first goal in a 2-0 defeat for Liverpool, with the fear of doing the same again haunting the veteran.

The mistake has supposedly affected Gerrard’s confidence on the field, going a long way into explaining his sudden dip in form for England at the 2014 World Cup and the start of the season with Liverpool.

”It’s an incredibly complicated and tender situation for Gerrard and he’s clearly showing signs of his worries on the pitch”, explained the England captain’s friend.

”It’s the whole ‘What if’ factor for him at the moment, which could be just as tough for Liverpool as it can be for himself, which is what worries him the most. Liverpool are looking good again, but they need Gerrard desperately because he’s the face of the club.

“I do believe he can overcome his demons. Gerrard is a very hard worker and a top class player, but I’d urge all fans to get right behind him and help pull him out of the mud.”
Login to Quote

England captain Steven Gerrard has announced his retirement from international football in order to focus on his Liverpool career.

Gerrard was part England’s squad that crashed out in the group stages of the 2014 FIFA World Cup in Brazil and has now brought his international career to a definitive end.

The 34-year-old, whose form for Liverpool has been questioned this season, believes his time will be best spent solely with the Reds and that England’s youth would benefit from his vacancy in the squad.

”It hasn’t been an easy bunch of months for me to handle and I’ll be the first to admit I haven’t been at my best recently”, declared Liverpool’s number eight.

”I’m on the final turn of my career and to complete it positively I feel I need to hold onto a single duty as opposed to two, therefore I have chosen to retire from international football.

“It has been a pleasure to represent my country and I’ve always given my absolute all on the pitch for those who love and support me.

“This is the right moment for me to come away from it all now and perhaps prolong my footballing career by one or two more years at Liverpool.

“We also have many bright, young players floating around the national team, like Ross Barkley and Jack Wilshere, so I feel that they are at the stage now where they must take up the opportunity to grab international experience and hopefully lead us to glory. I didn’t want to disrupt that.”

Gerrard concludes an England career that saw him pick up 114 caps for England and score a total of 21 goals.

In a spell that stretched to 14 years with the Three Lions’ crest on his chest at senior level, Gerrard made his debut against Ukraine in 2000.

The Huyton-born midfielder made a full impact in England colours in September 2001, when his goal against Germany initiated England’s 5-1 demolition en route to the 2002 World Cup in South Korea & Japan. 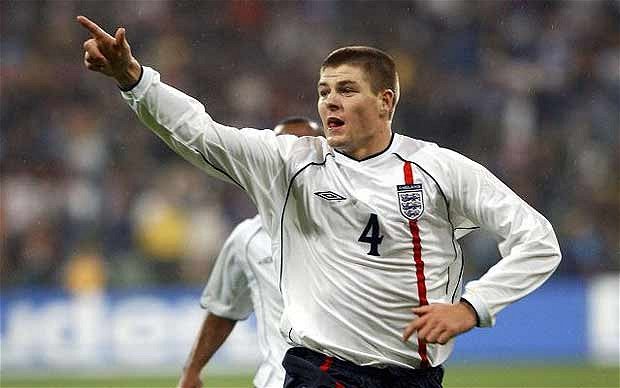 Gerrard missed out on the opportunity to play for England in the 2002 World Cup through injury, but was there to score versus Trinidad & Tobago in 2006, before missing from the spot in the penalty shoot-out versus Portugal.

The Englishman also scored in the 2010 World Cup versus the United States, John Terry’s final World Cup as captain, as Gerrard led Roy Hodgson’s men to Brazil in 2014.

Manchester United striker Wayne Rooney is the odds-on favourite to succeed his Merseyside pal, with Joe Hart and Gary Cahill also thought to be in the running for England captaincy.
Login to Quote

pompeyblue
5 years
Real shame to see such a legend retire from international career but as he says himself hopefully it will help him prolong his Liverpool career and improve his form for the club.
Login to Quote

You are reading "Liverpool FC: Won't Look Back".