With the Christmas festivities well and truly over and the turn of the year eclipsing, the year of 2018 stands before us with many more great challenges and excitements. However, before we can move forwards, we must look back at the star performers of 2017. 2016 saw Lionel Messi win his third Ballon d'Or in a row (his seventh in total), with team mate Luis Suárez finishing runner-up and rival Cristiano Ronaldo finishing in third. Was Messi able to extend his record and win the prestigious award a fourth time in a row and an eighth time overall?

Third Place: In third place this year was Chelsea's Eden Hazard. The Belgian winger is 27 just seven days in to the new year and has become a true Chelsea icon, five and a half years in to his career with The Blues. His pace and skill are his main assets on the pitch as he can take on any defender in the world with grace and elegance. When you combine these attributes with his creativity and intelligence on a football field, along with his eye for goal, you are faced with the complete attacking midfielder. The 2016/2017 season was a fruitful one for Hazard and his individual performances led to him being named the Barclays Premier League's Players' Player Of The Year, and he also made the Barclays Premier League Team Of The Season. His performances in Europe were outstanding too, as he was named as the third best player in Europe for the 2016/2017 season. While Chelsea finished 3rd in the league and were sent sprawling out of the Champions League first knock-out round last season, they did win the FA Cup and that was largely down to the brilliance of the Belgian winger. The calender year has been good to Eden Hazard who clocked up 20 goals and 13 assists in 55 appearances, which earned him 177 voting points.

Second Place: It was Cristiano Ronaldo of Real Madrid who was runner-up this year, making it the eighth time that he has been amongst the three finalists but not won it; a sad record in itself. The 32 year old Portuguese attacker was searching for his third Ballon d'Or, with his other wins coming in 2008 and 2013. It has been a humbling year for Cristiano Ronaldo as he was handed the captaincy at Real Madrid, due to the 36 year old Iker Casillas now becoming Real Madrid's second choice goalkeeper behind Keylor Navas. Ronaldo has plenty of captaincy experience, of course, having held the armband for his country for over eleven years now! Ronaldo's goalscoring record has taken a hit over recent years but he has contributed more to the overall play for both club and country and has become more than just an influential attacker, but also an influential figure for the whole club. Cristiano Ronaldo lead Real Madrid to their 34th league title in the 2016/2017 season, as they finished just one point above rivals FC Barcelona. It was a season of two trophy wins for Los Blancos and Ronaldo as they beat Granada in the final of the Copa del Ray. Unfortunately for Ronaldo and Real, Barcelona humiliated them in a 4-1 aggregate win in the Champions League semi-finals. However, there was plenty of cause to celebrate for Ronaldo as he was named as UEFA Champions League (2016/2017) Best Player and the Best Player In Europe in 2016/2017. Scoring 27 goals and assisting 9 in 51 appearances saw Ronaldo claim a staggering 279 voting points, but it was not enough to win Ballon d'Or.

First Place: The winner of the Ballon d'Or 2017, for the fourth time in a row and in eighth time in total, is Lionel Messi of FC Barcelona! The 30 year old Argentine attacker has been a key man for Los Culés and for world football for over a decade now and he is the player who every kid grows up dreaming of being. Alongside Luis Suárez and Neymar, Lionel Messi completes one of the most fierce attacks in football history and has more magic in his left boot than all the tales of Harry Potter combined. It was a disappointing league season for Messi and Barcelona as they missed out on the league title by a mere point to rivals Real Madrid but they made that up in Europe as the tore apart their rivals in the semi-finals before putting three past Bayern Munich in the final as they won 3-1, with Messi & Suárez being involved in each goal. Messi's form in Europe recognised him as the second Best Player in Europe for the 2016/2017 season. Disappointment came in the UEFA Super Cup as Barcelona finished runners-up, and they could do no better or worse in the Club World Cup as they failed to win in the final. This cloud of disappointment cannot shade over Messi's exploits as he was named as the best player in Liga BBVA for the 2016/2017 season and was the Barcelona's supporters' player of the season too! He may be growing older and he is now on the wrong side of thirty, but 28 goals and 9 assists in 52 appearances saw Messi earn 481 voting points which was more than enough for him to win Ballon d'Or. 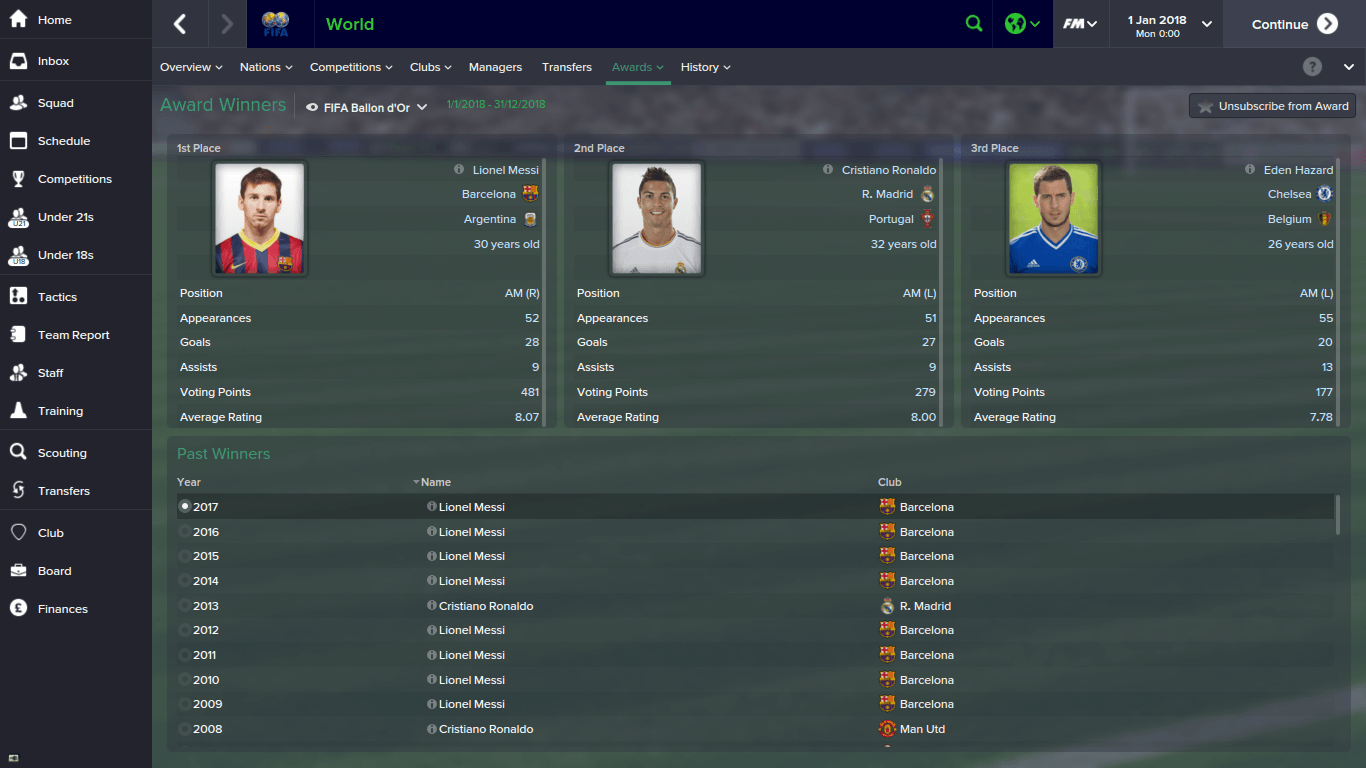 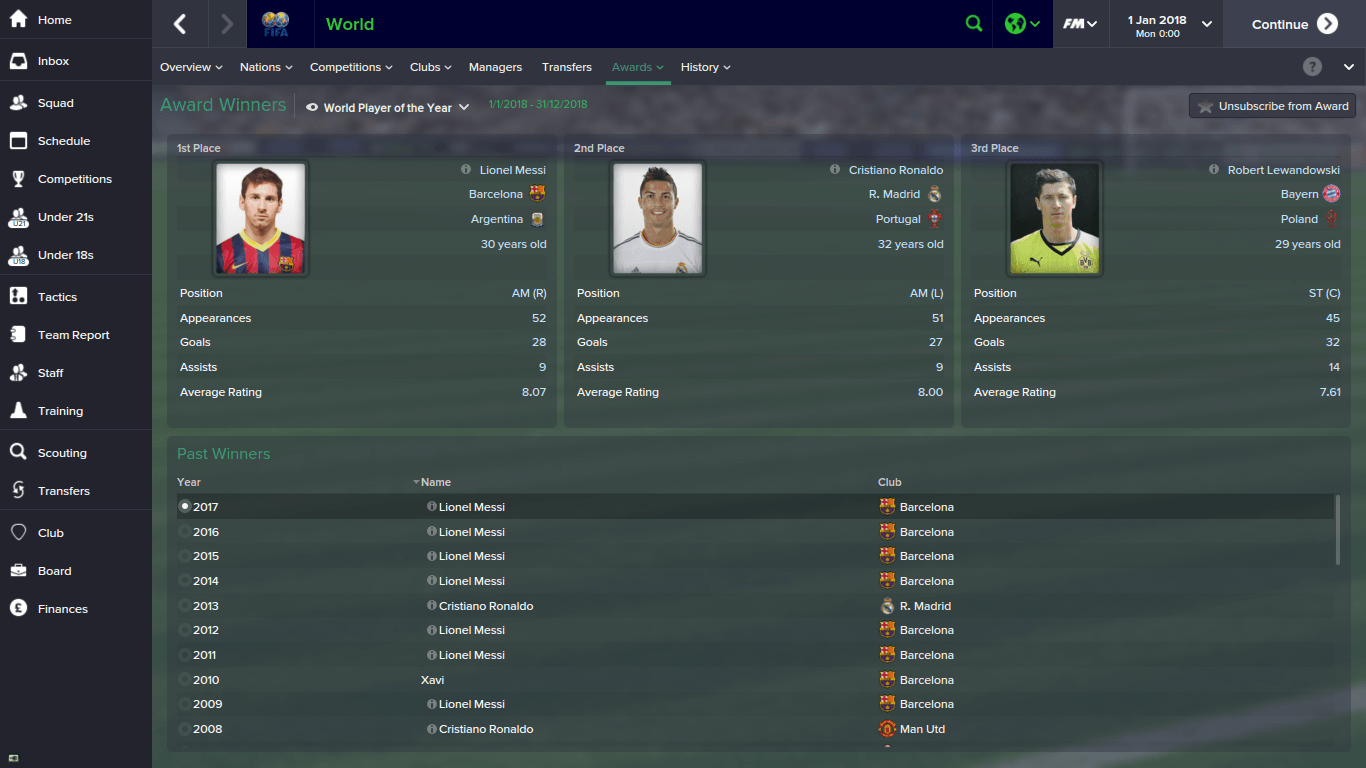 pompeyblue
7 years
No surprises their then... 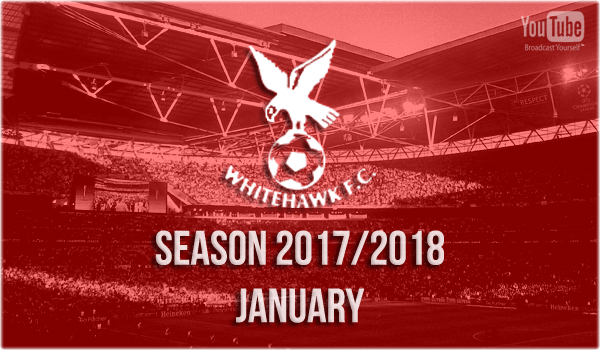 Looking back at these results just makes me want to cry. We struggled in our opening game of 2018 against Port Vale and it took a very late Dean O'Halloran goal to secure the points for us. However, we struggled to score in a goalless draw away to Newport County before conceding a stoppage time equaliser at home to Crewe. We then conceded a stoppage time goal to lose against Doncaster, which really hurt the squad. This was evident as we were hammered by Plymouth. Luckily for us, we managed to pick ourselves up in time to beat Gateshead a comprehensive 3-0 at home to end a difficult month on a high. I'm disappointed with this month, we could have and should have done so much better. Complacency saw us drop points late on against Crewe and Doncaster, and they would have been valuable points against promotion rivals. 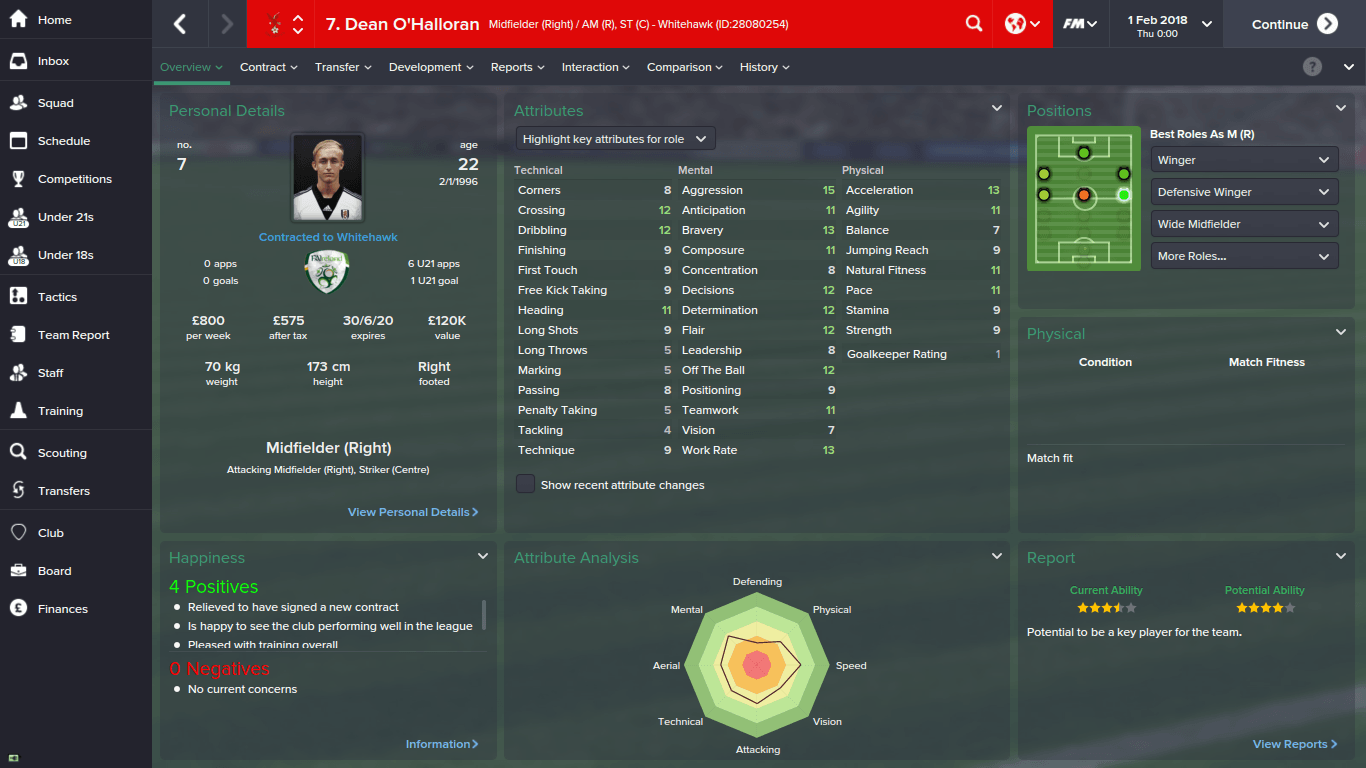 Dean O'Halloran was our best player in a difficult month. The Irish winger scored three goals and was always adventurous and creative in attack. He was a driving force for us when we needed him. He was key in our win against Gateshead and he scored the late winner against Port Vale. 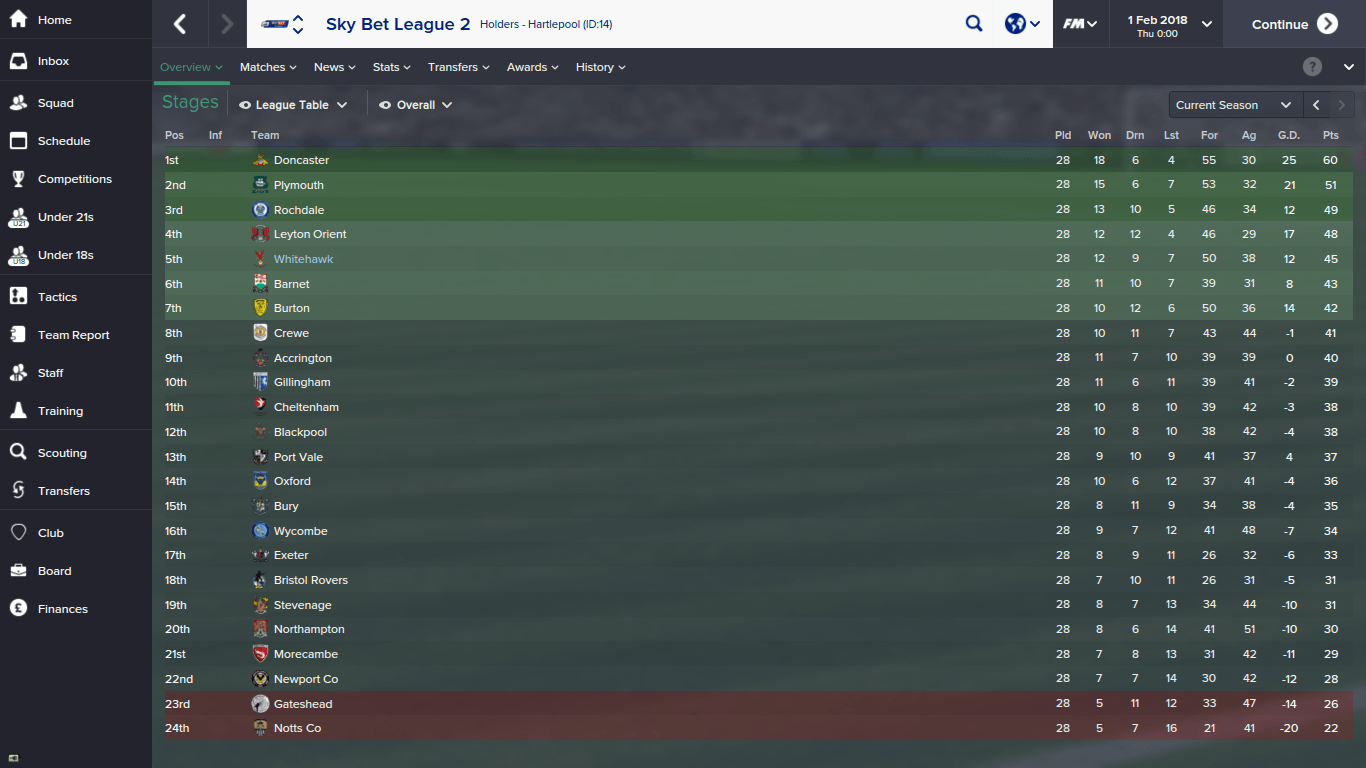 We have five tough fixtures next month, including a promotion crunch match Burton. Hopefully we can improve on our bad form from the past two months and push on for the promotion spots. Our dreaded fixture away to Cheltenham comes at the end of the month and anybody who has followed our progress since the very start knows how much I hate playing against Cheltenham. They're our bogey team.

basham97
7 years
Just caught up! Really liking it although I would like some more detail in the monthly reports. 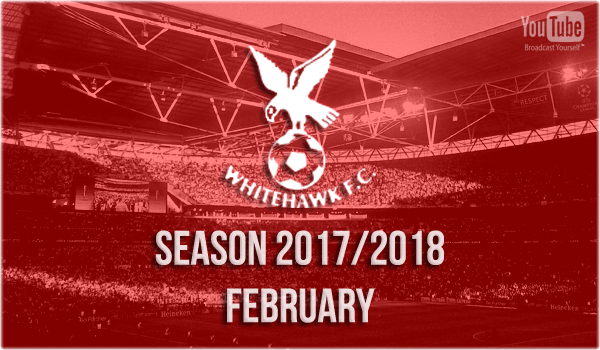 We most certainly improved this month, that's for sure! Notts County battled to deny us three points at their place but we picked up three wins in a row directly after that, including a 4-2 thumping of Burton! We rounded off the month with a respectable 2-2 draw away to Cheltenham, although we would have taken all three points home had they not equalised in the fourth minute of stoppage time. I'm over the moon with this month. We picked up eleven points from a possible fifteen after two difficult months to really pick our form in style. Ahmed Abdulla is a man who deserves a lot of praise for the work he does in midfield. The Saudi Arabian midfielder has been an integral of my team since I first joined the club. He's technically gifted and a very determined player. His work in midfield over the last month has been key to our improved form and he deserves to be my player of the month. 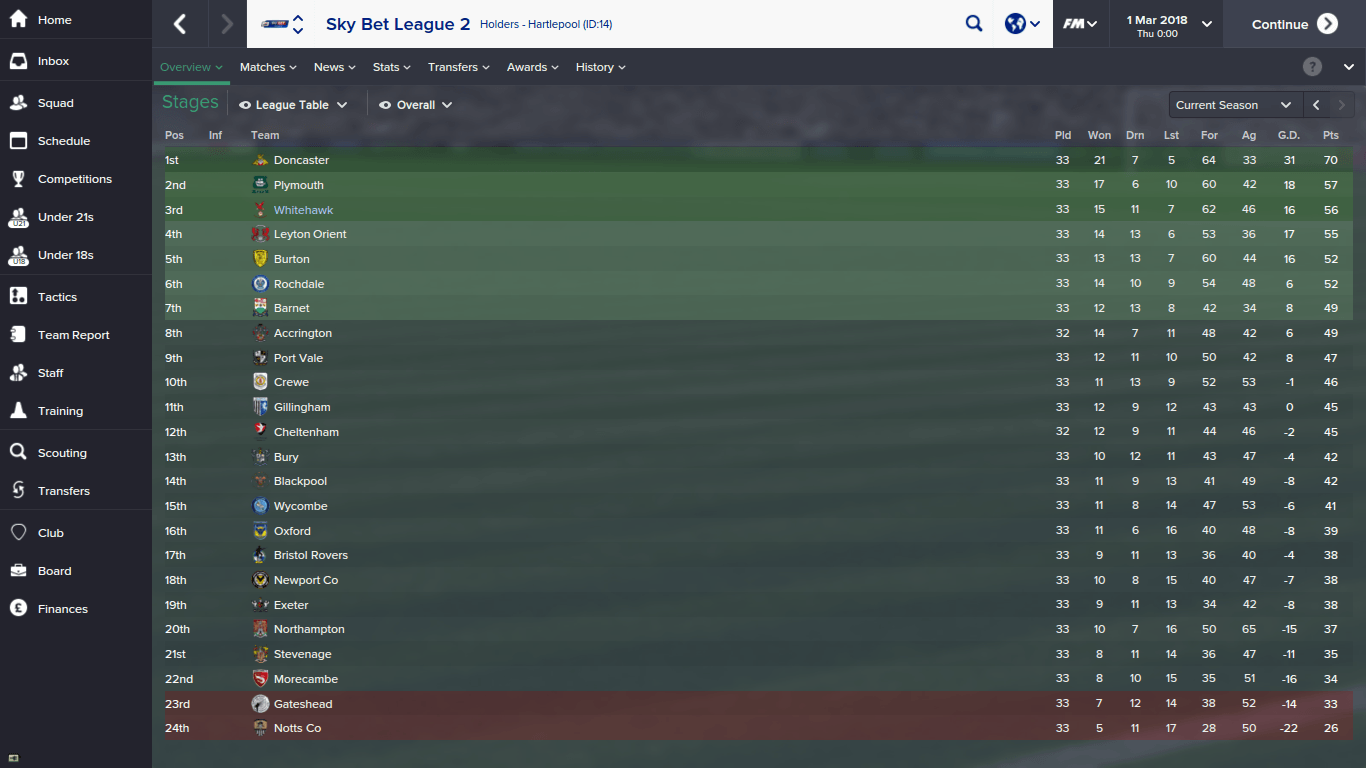 We're back with a bang as we climb back up to third! The fight for promotion is a tight one but one which we currently have the advantage in. We are the team on form at the minute and we can be very proud of where we are.

March is a busy month for us as we play seven league games. The big games comes against Leyton Orient and Accrington. I'm hoping to take home at least twelve points from next month's fixtures. It will be tough but to be the best, you have to beat the best. There is still a lot of football to be played and we need to keep performing.

Justice
7 years
With tomorrow being Christmas (today in some countries), I won't be online here for the next few days. This, to state the obvious, means that I won't be updating this story for a few days. I'll be back after this mini holiday from writing fresher than ever with plenty of more ideas to throw at you readers! 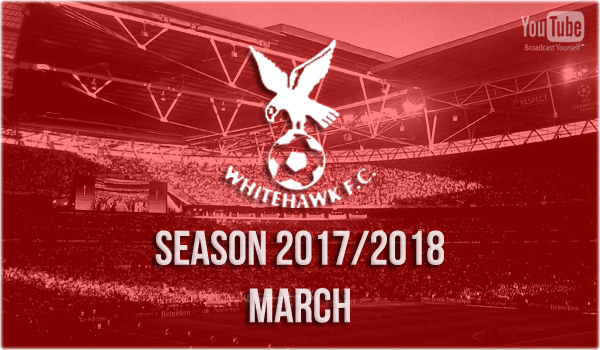 We were very inconsistent this month but considering we played a whopping seven league games, I think we can be excused. We had a very tough schedule with no rest at all so considering our fitness issues, three wins and three draws with only one loss is very impressive. Scoring goals proved to be an issue for us this month, surprisingly, as we only hit the back of the net ten times combined over the seven games. I would like to say I'm disappointed with this month but every other promotion-chasing team slacked off too so we're still doing well considering. The young man on loan from Brighton, Kevin Griffiths, is my Player Of The Month once more. Say what you want about his attributes but this guy has been outstanding in attack. I've played him mostly on the left wing but he does play the odd game up front and he has performed in almost every game. His electrifying pace and his flair are key to his game and he uses them to full affect as he torments opposition defenders. 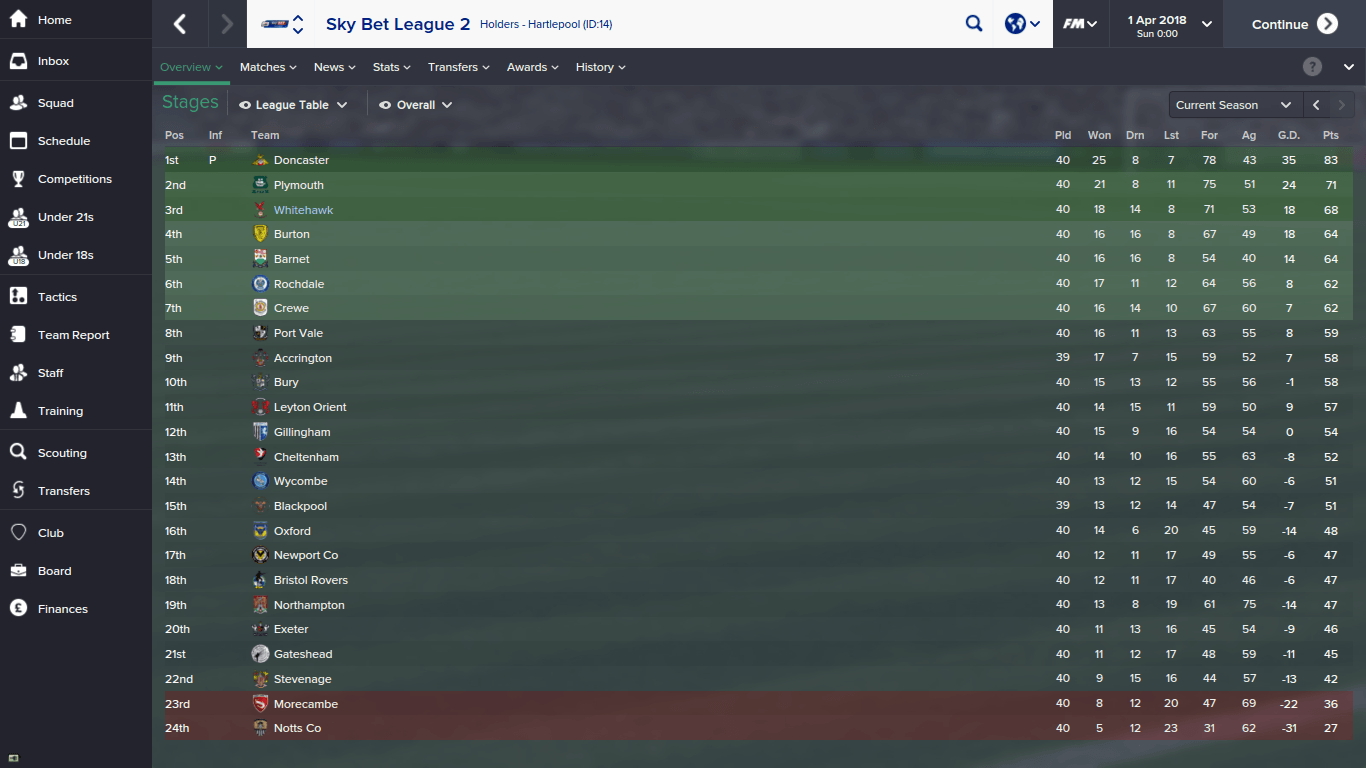 We have retained our third place spot and have extended our lead over the rest of the pack to four points! We only have six league games left to play and we are hoping to wrap up the promotion chase long before they are over. We are so close to reaching our objective and I am very excited about the prospect of playing in League One next season. Hopefully we can seal the deal with a few games to spare.

In our last set of six games, we play at home just twice. The big games come against Plymouth, Rochdale and Barnet who are all chasing promotion. Five wins would guarantee us promotion but in reality we will require a lot less than that. We can't stop playing now, there is still a lot of work to be done. We can't let this slip now.

pompeyblue
7 years
You're doing a marvellous job, so close to promotion now! Hopefully you can clinch it soon enough, and move onwards to destroying League 1


My most sincerest of apologies to all my readers/followers for not updating over the last few weeks. I have had an incredibly difficult/busy Christmas period which has not allowed me to spend any time here or even playing (much) FM. I even strongly considered leaving the site to battle my own personal wars. But alas, I have returned! I am currently midway through the 2018/2019 season and once I have completed it, I will post season reviews of everything missed and then hopefully updates shall return to normal. Thank you for your patience!
Login to Quote

Tallery
7 years
Wooo, knew I was too much to resist Justice