Aaron
8 years
Nice one mate, great month keep it up!
1
Login to Quote 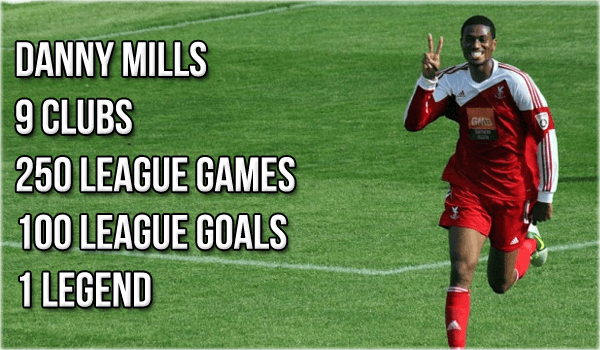 Not many players become prolific enough to score 100 league goals in their career but Whitehawk captain Danny Mills is one of the few elite. The English forward reached his milestone when he scored his third of the season away to Burton last month. He hit this milestone on his 249th career league appearance and has since went on to make one more to hit the 250 mark, another memorable milestone.

The 26 year old had a difficult start to his football career. He was a product of Crawley's youth academy, making his Conference Premier debut in 2008/2009. Championship side Peterborough brought him away from his home town club the following season but following six loan spells in three seasons, at Rushden, Torquay, Histon, Kettering, Tamworth and Kettering again, Mills failed to break in to the Peterborough team and was released after the 2011/2012 season. In 2012/2013, he signed for Ryman Premier side Carshalton but after just six games in to the season, Whitehawk came along and signed him up. He scored 12 goals in 31 league appearances in his debut season for The Hawks, and has since gone on to score 77 league goals for the club where he was handed the captaincy last season. He has become a club idol and a true hero to the fans.

Danny Mills: "It means a lot to me that I hit the milestone which I did and it stands out as one of the best moments in my career so far. None of this would have been possible had Jim Collins, the chairman, not brought me to the club in 2012 and had the Prince not shown as much faith in me as he did when he came in. I did have to play out of position on the right wing a lot, and I still fill in there from time to time, but it doesn't bother me as long as I'm on the pitch and doing my best for the team.

It's fantastic to be scoring as many goals as I have been and although this season has started a little slowly for me so far, the team has played well and we're proud of where we are now. It's obviously a major honour for me to be a captain here and hopefully we can do a lot more over the coming months and put us in serious contention for promotion."

Neal
8 years
He's bounced around a lot, but great to see that Mills has been in great form for Whitehawk and has reached two such prestigious milestones!

Yeah, he's become our hero and talisman and has pulled us out of trouble in many games! 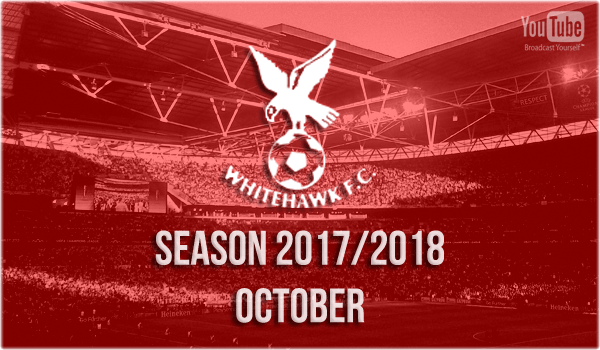 We endured a tough start to the month as Leyton Orient ended our unbeaten league run. Up next was the COC fixture away to Plymouth and I did keep my promise of starting a secondary team, and we were spanked. We got back to winning ways against Wycombe, thanks to an inspired performance by Kevin Griffiths. The Morecambe defeat came as a surprise as we had been dominating the game from start to finish but our concentration slipped twice and we suffered as a result. However, we picked ourselves up and scored seven in the remaining two games of the month, as four goals from Danny Mills helped us dispatch Bristol Rovers and Northampton. I'm happy with this month. Yes, we lost three games, but we bounced back from our defeats and performed admirably. 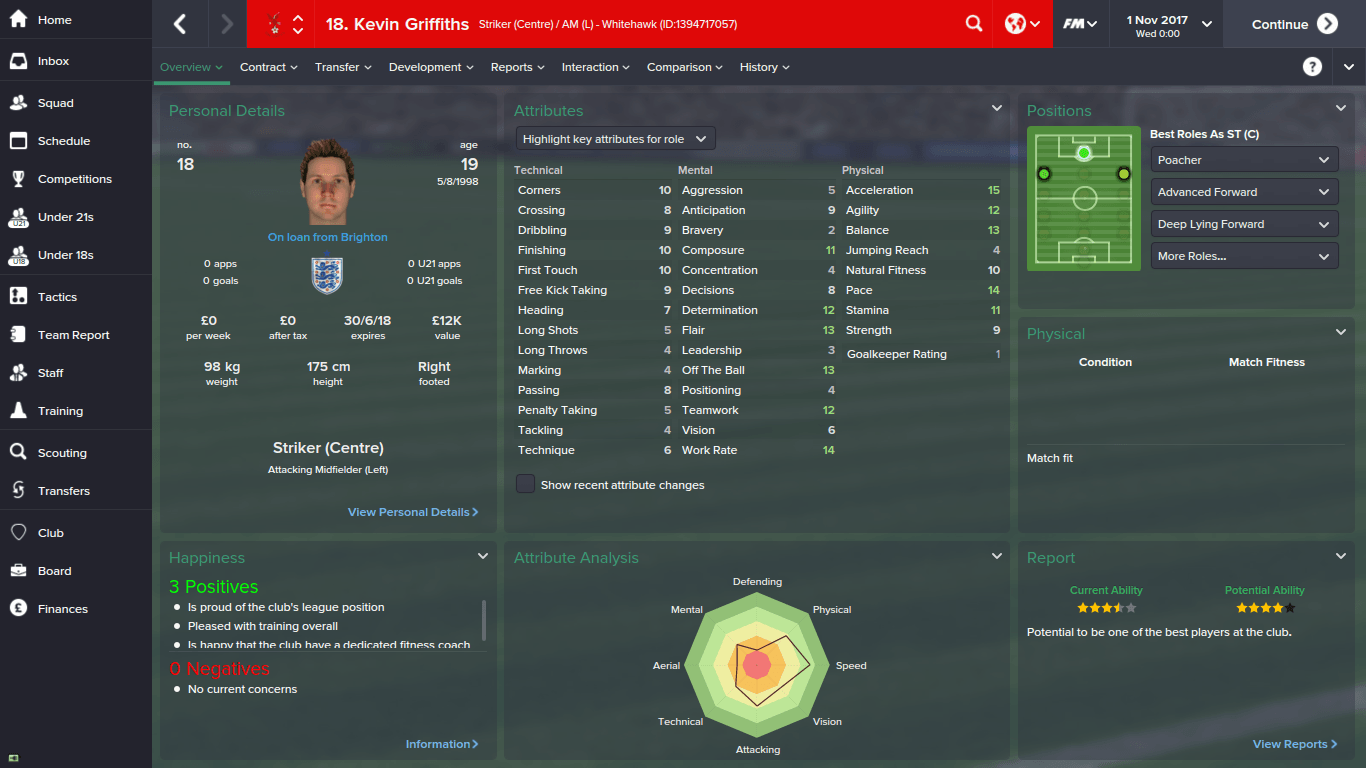 The attacker on loan from Brighton, Kevin Griffiths, was my best player of the month. At first, he had a tough time breaking in to the squad but he has found some form and produced some fantastic performances which have been key to our recent good form. He has pace and intelligence, which means he can get in to very dangerous positions very quickly. He is not the most technically gifted player but he is young and has plenty of time to develop in to a lethal attacker. His goalscoring ability has come to the fore this month, as he netted four times in the six games. I'm hoping that he can continue his run of form and keep firing the goals in. 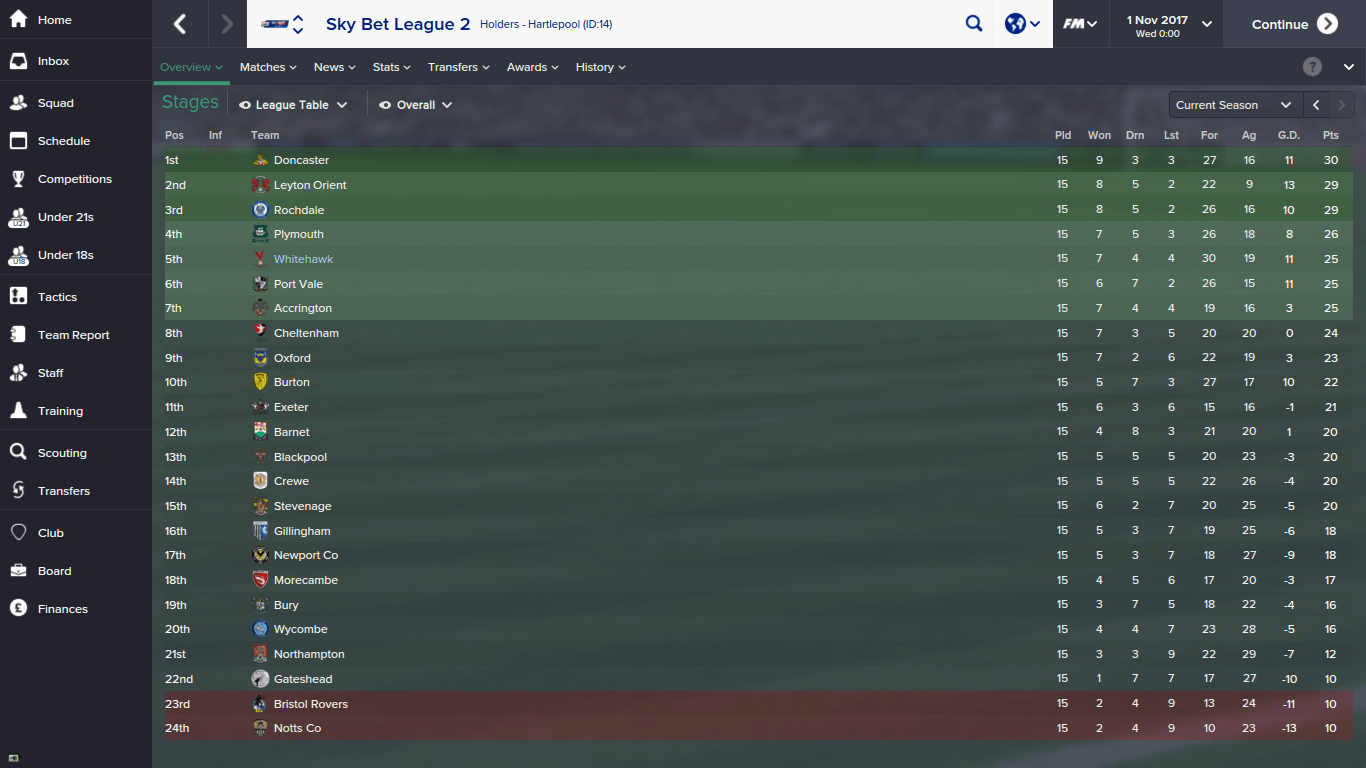 Our good form has seen us climb further up the table in to 5th position! We are now just five points off first placed Doncaster and we are looking more and more like promotion candidates with each passing month. While we have cut down a lot on goals conceded, we are now also the top scoring team in the league so far this season. This shows how much we have grown as a team over the last year.

We play just three league games and one FA Cup game next month as we look to strengthen our promotion charge. I'm hoping for six points next month and to give Rochdale a good scare in the FA Cup, even if we don't progress.

pompeyblue
8 years
You're doing really well at the moment, and are right in the promotion mix, now! Congrats on 250 replies as well! 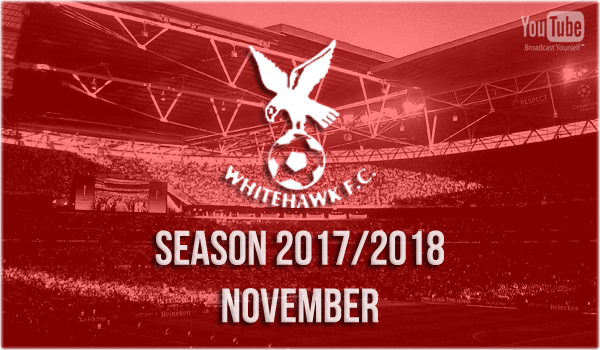 We kicked off the month with a respectable win over Stevenage at home before our big cup game. The game against then League 2 leaders Rochdale ended in a tough 2-2 draw (I played a weakened team), and forced a replay away from home. We then dropped a two goal lead away from to Accrington, as we drew 2-2 in the league. Next up was the cup replay and after William Humphries scored a stoppage time long-range thunderbolt, in true Steven Gerrard fashion, we conceded two goals in Extra-Time and Danny Mills' penalty was not enough to bring the game to penalties. We picked ourselves up and Irish winger Dean O'Halloran was once again on the scoresheet as he scored the winning goal at home to Oxford. Overall, I can't be disappointed with this month. Rochdale were the favourites in both FA Cup ties so for us to bring the tie as far as we did is very respectable. In our three league games, we were unbeaten, which you cannot be disappointed with. Seven points from a possible nine is a good result to take and I'm delighted with our return. 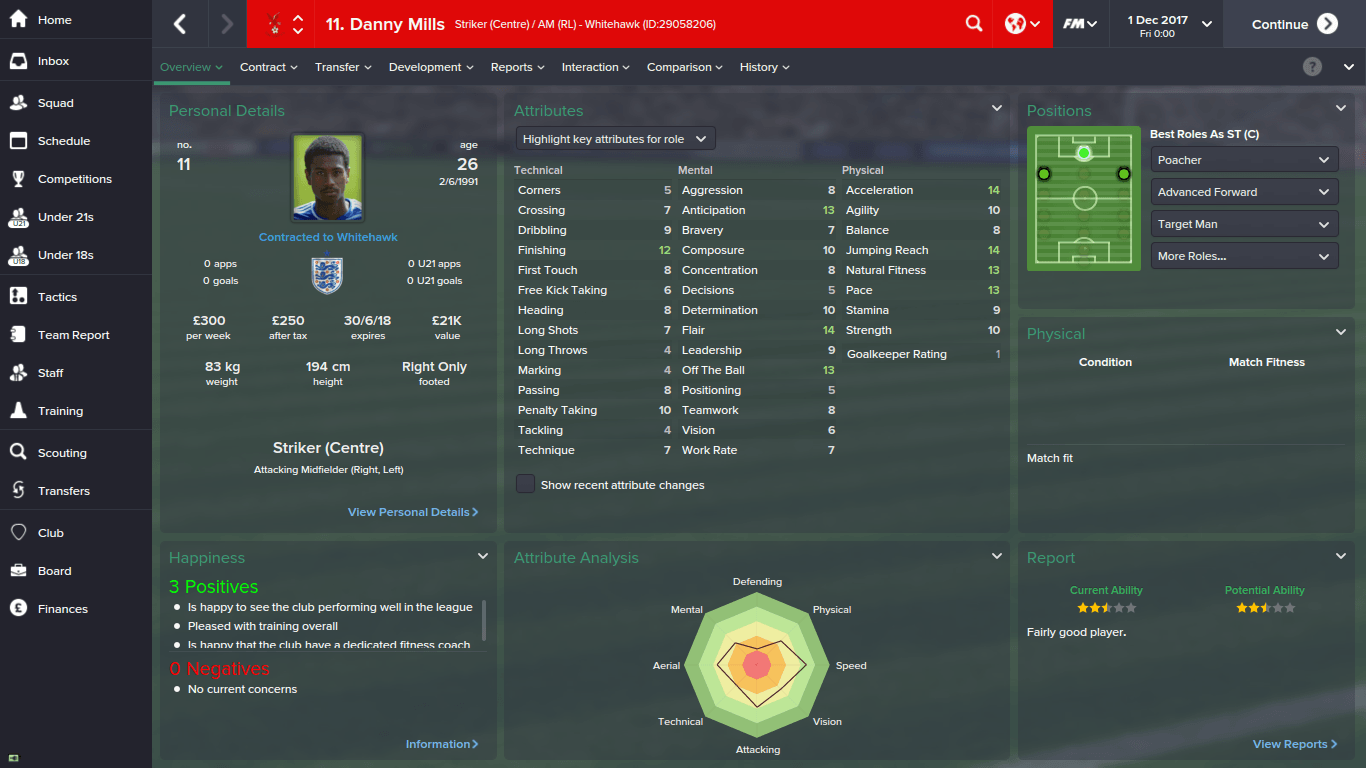 The one and only Danny Mills was by far our best player of the month. He scored a total of five goals this month, two of them being penalties. He has been rotating between the striker and the right wing position, due to the sheer number of attackers we have, and his versatility has been very useful for us this season. 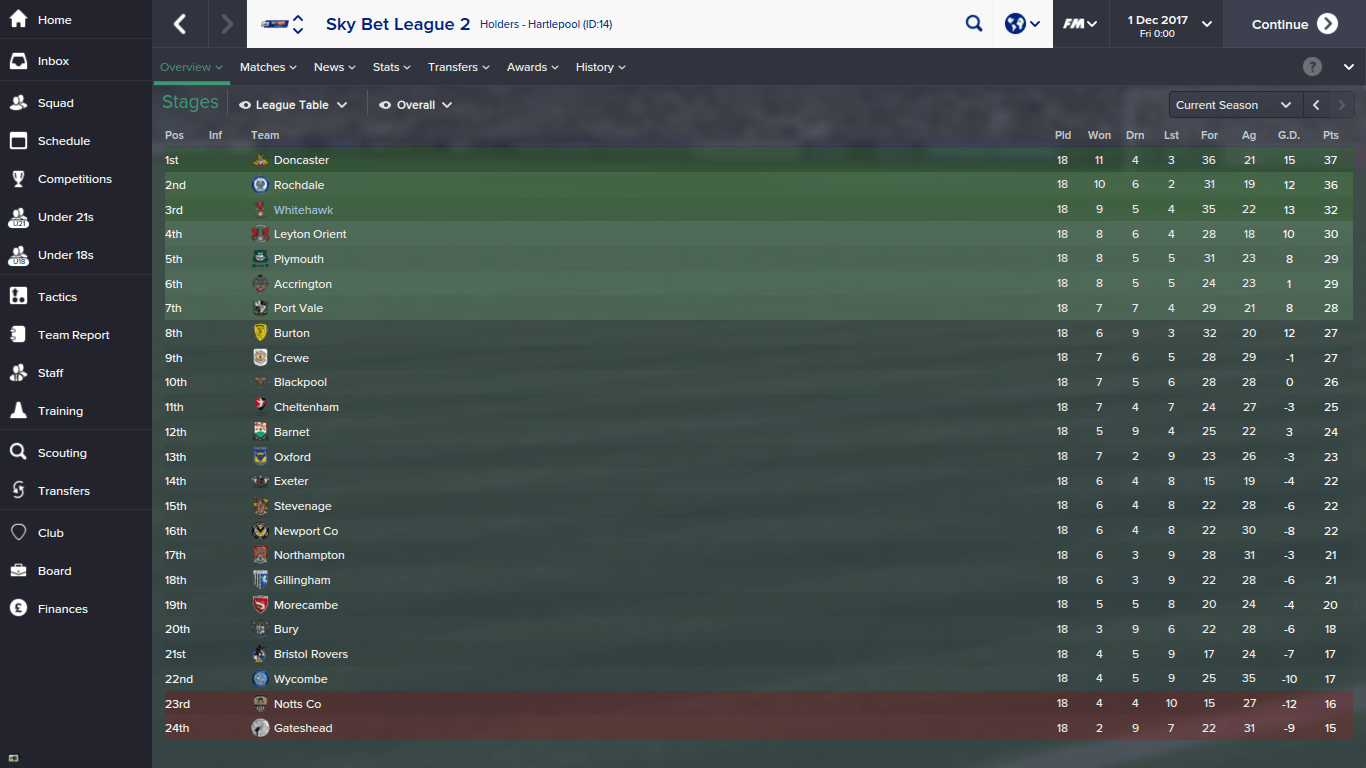 We climb another two places this month and after 18 games, we sit in an amazing 3rd place! We are still five points off the top but we are very comfortable in the top section of the league now. We have the second best Goal Difference in the league and our goal scoring record is second to just Doncaster. Hopefully we can continue our push and earn automatic promotion.

To open the month, we host a Rochdale side who are quickly becoming our rivals. We then have a two week break before playing at home to Exeter, followed by a match against Port Vale. Our Boxing Day fixture is away to Barnet, while our last game of the year is at home to Blackpool (lol they're in League Two). I'm hoping for ten points from this month. It will be very tough but we want to end the year on a high and leave nothing to chance. 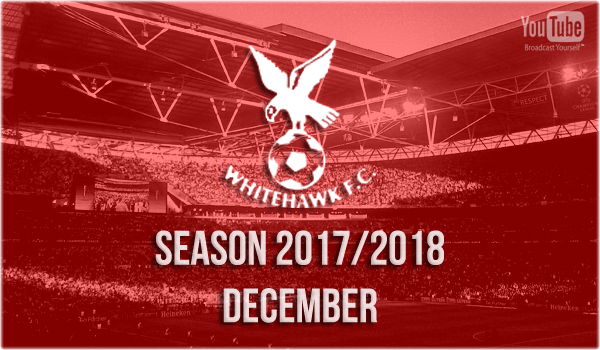 This has been our most frustrating month of the season so far. We went ahead against Rochdale four times but we were pegged back every single time until the game finished 4-4. We followed that up by dropping a two goal lead to draw against Exeter before being hammered 3-0 by Barnet away from home on Boxing Day. Luckily, we picked ourselves up to beat (undeservedly, to add) a Blackpool side who have been struggling and had just hired a new manager. It has been a terrible month defensively and to draw the first two games in the way we did was very, very frustrating. 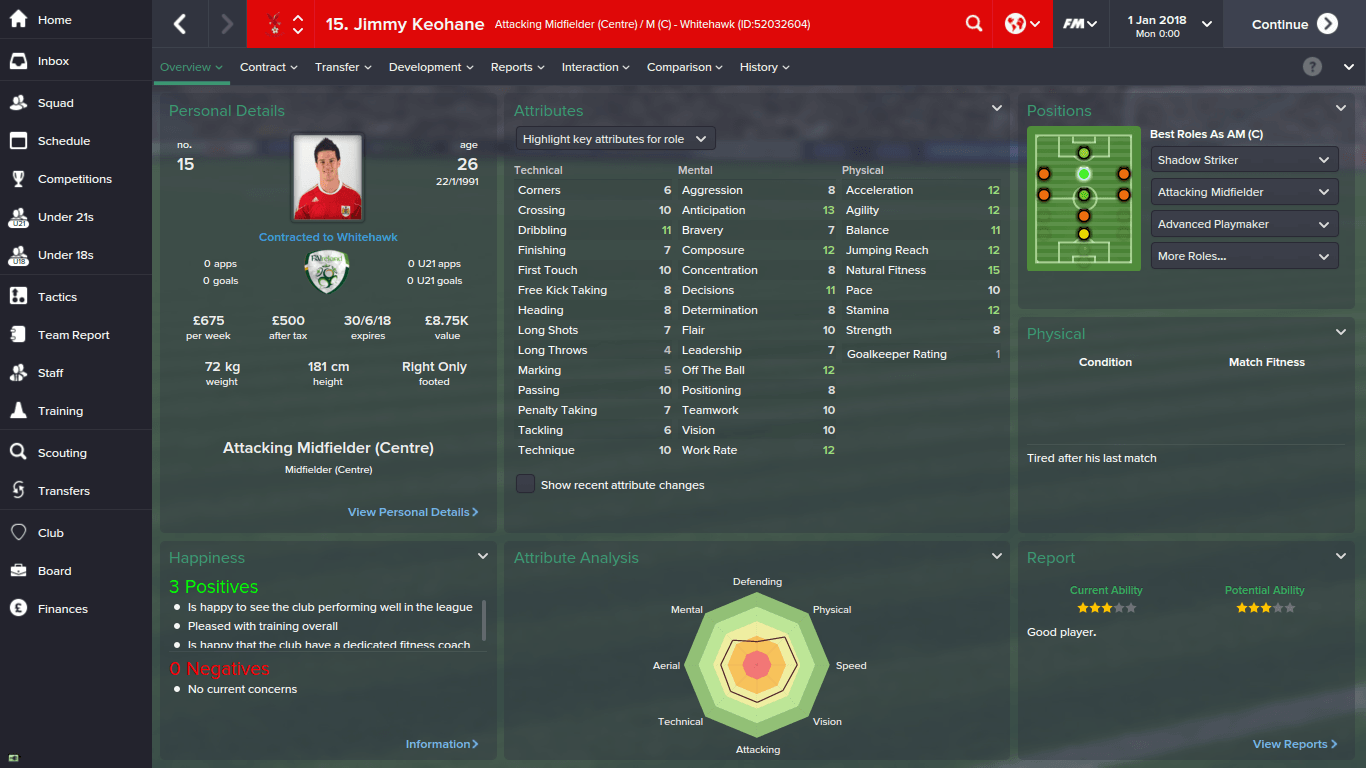 A shining light in a dark month for us has been Jimmy Keohane. The attacking midfielder scored three well taken goals and created many chances for his team mates. He has been in great form and carried the team during many games. 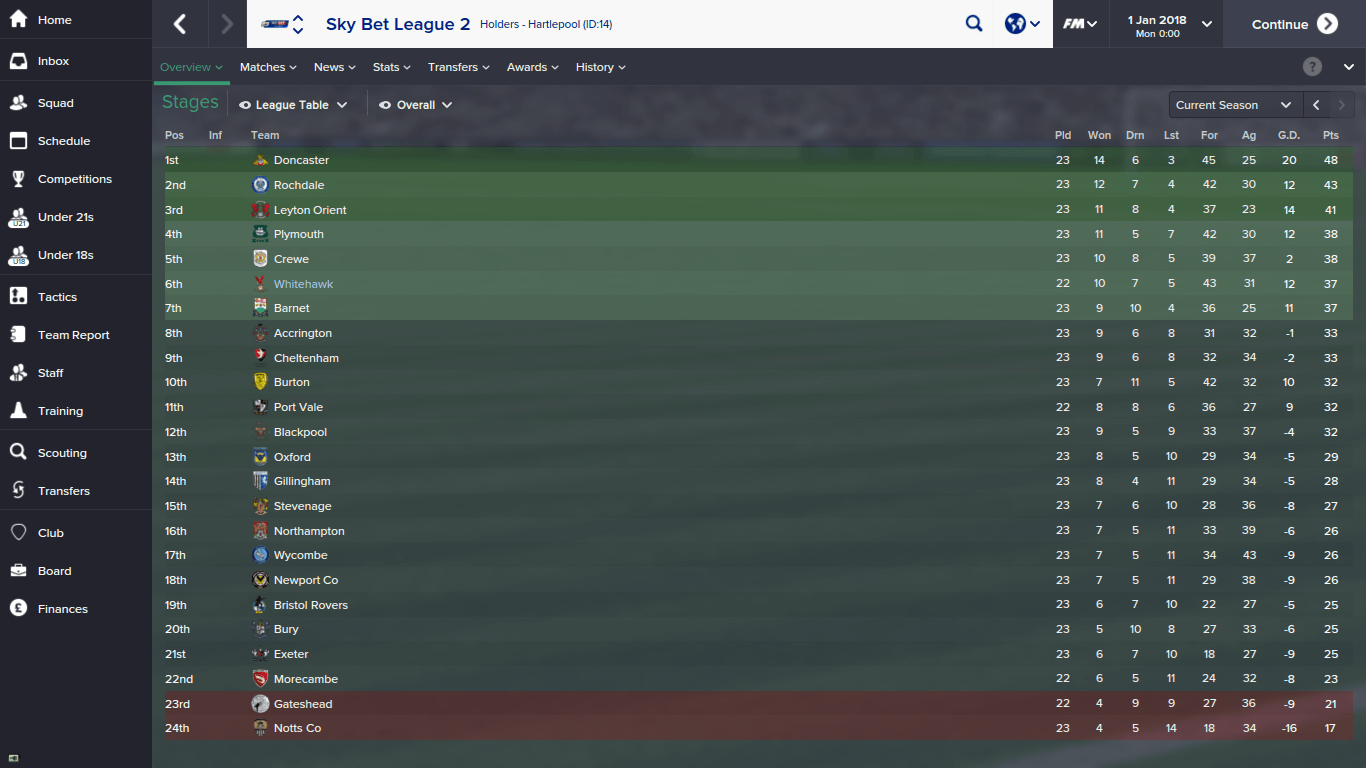 Our shocking form has seen us drop down to sixth position, four points off the automatic promotion spots, despite a game in hand in our favour. We need to pick up our form in order to catch up.

We play six league games next month, including games against fellow promotion chasers Port Vale, Crewe, Plymouth and Doncaster. This will not be an easy month at all and we need to return to our brilliant earlier form to get the points we want.