pompeyblue
5 years
You paid a hell of a lot of money for Icardi, so he better perform well and live up to that massive price tag! Shame to see Correa leave Atletico but you've got a lot of quality in the midfield which should ease the pain of his departure.
Login to Quote

Neal
5 years • Edited
pompeyblue: I'm confident Icardi will be a hit! Sad to lose Correa, as you say, but I think we have high enough caliber players to fill the gap

STORY OF THE MONTH


Thank you guys so much for the second Story of the Month win for this story!! It feels absolutely fantastic to win for a second time and know that you guys are still enjoying my writing. It's corny, I know, but it's a wonderful feeling to know you guys are all still engaging, commenting, reading, and urging me on to do better. Here's to February!

Note: Sorry about the lack of updates, I've been out of town for some youth political conventions. I'll try to get one or two out soon, and then I'll be gone from Wednesday until Sunday again. Cheers


As the friendly fixtures of both Atletico de Madrid and Borussia Dortmund draw nearer and nearer, the Laudrup brothers have announced both of their preseason squads ahead of the upcoming fixtures. With a mix of stars, new signings, and young players looking to make good on their chance, it should be a very interesting preseason for both clubs.

Brian Laudrup has included a number of stars to keep an eye out for during Borussia Dortmund's preseason tour. The biggest two names to watch are two of the strikers; Mauro Icardi and Munir El Haddadi, young superstars-in-the-making that are looking to repay some massive fees that der BVB paid to bring the duo to Signal Iduna Park.

In terms of young players, two footballers are being quietly considered Dortmund's future stars but the club's closest fans. Dzenis Burnic, the 17 year central midfielder, is known for his technical proficiency in passing, technique, dribbling, first touch, and crossing. Up top, 15 year old Sedat Erarslan has torn up the youth teams with his powerful heading, intense physicality, and courageous bravery.

Dortmund have just four friendlies, playing Siegen, Teplice, facing their biggest test against Portugal's Sporting, and then playing Kuban before the season gets underway.

Michael Laudrup has announced, more or less, an entirely first team squad for the upcoming preseason. Antoine Griezmann and Koke Resurreccion are set to be two of the team's very best players yet again this season but are now joined by Thiago Alcantara, creating a trio of superstars that can compete with anybody.

Danish striker Marco Ramkilde is included by his countryman after impressing greatly in preseason last season. New signing Jose Luis Gaya and Thomas Partey, who has returned from his loan at Almeria last season, both have a lot to prove this preseason to earn themselves a real spot in the rotation ahead of the proper season.

Atletico will play Volga NN before facing tests in the forms of Bayer Leverkusen and AS Roma, before finishing their preseason against Birmingham and Rayo Majadahonda.

mo_123: I think they both could end up being influential players for their new respective clubs...fingers crossed!


I have finally returned home from my trips to a couple cities across the country. Hopefully now I can really get back to the grind and start pumping out updates for you guys on a daily basis. We have a Story of the Month title to defend, after all! Onward ho! 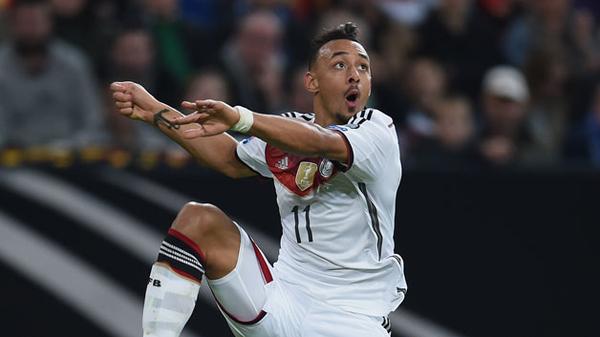 Germany international Karim Bellarabi got off to a bright start this preseason, scoring once and assisting four goals in just four matches.

Borussia Dortmund enjoyed a short but successful preseason ahead of their 2015/2016 domestic campaign, taking on Siegen, Teplice, Sporting (POR), and Kuban. Der BVB won all four games, outscoring their opponents 16-1, including a 4-1 demolition of the best of the four teams, Sporting.

A number of new signings started gelling with the first team and preparing for the upcoming year in style. Let's take a look at each of the games, and how players performed over the course of this friendly campaign.

As a whole, the preseason went smashingly. New signing Munir El Haddadi, who came over from FC Barcelona, led the way with four goals in three games. Unfortunately, the youthful striker picked up a gashed leg against Sporting and will miss the DFL-Supercup. Karim Bellarabi also played excellently, racking up four assists.

One of the biggest talking points were the struggles of Mauro Icardi. The Italian striker started all four friendlies but failed to make any sort of an impact, neither scoring nor assisting even once. He played 45 minutes in each match but managed only two shots total, just one of which was on frame. Unless he picks things up, Icardi may just be the newest super-expensive flop.

One of the most exciting moments for Borussia Dortmund fans was that of the unofficial debut of Sedat Erarslan. The 15 year old Turkish-born German has been with the club since he was seven years old and scored 2 goals in his first 2 friendlies with the U19 side this year. Brian Laudrup brought the teenager on against Kuban and watched him score two beautifully taken goals, proving that he was one for the future.

The competitive season starts in 7 days for Dortmund in the DFL-Supercup against last year's Bundesliga champions, Bayern Munich. Despite missing star striker Munir, many fans are hoping that der BVB can one-up Bayern just as they did in the DFB-Pokal last season. With preseason complete, it's only a matter of time before the drama gets underway.

Oz96
5 years
You definitely need Icardi to step up against Bayern as Munir is unavailable for you. Good pre-season, Sedat Erarslan is Dortmund's next captain!

Oz96: It'll be tough without Munir, but I feel quietly confident that we can pull off a win. As for Erarslan...he might just be! Just 15 years old and 5 star potential!