Feliks
5 years
Wellington Nem had an absolute blinder against Sassulo

walkinshaw
5 years
You've signed some great youngsters mate and good luck getting back to the top again.
Login to Quote


Thanks, I'm hoping they workout for me

Ya he definitely had himself a fantastic game
Login to Quote


Inter Milan picked up a big result in the Derby d'Italia to start off the month of December by beat Juventus 2-0, the third time they have beaten Juventus in the last four meetings between the clubs. Carlos Fierro and Wellington Nem were responsible for the goals with Fierro scoring the winner in the 58th minute and Wellington Nem scoring the dagger in the 90th minute.


Inter Milan finished off their Europa League group stage against Werder Bremen where they tied with the hosts 3-3, Carlos Fierro scored a brace along with Adnan Januzaj scoring another goal to help them secure the point and win Group L. They went on to play in the Derby della Madonnina, a high intensity game in which both teams battled hard to 2-2 draw. It was very dramatic as heading into the 90th minute AC Milan were winning 2-0 but thanks to two goals from Bernard then Carlos Fierro helped the Nerazzurri have an incredible comeback in one of the all-time great games between the Milan rivals. Inter finished 2015 off at home against Atalanta where they saw themselves tie for the third straight time battling to a 2-2 draw from a goal from Wellington Nem and Atalanta own goal. 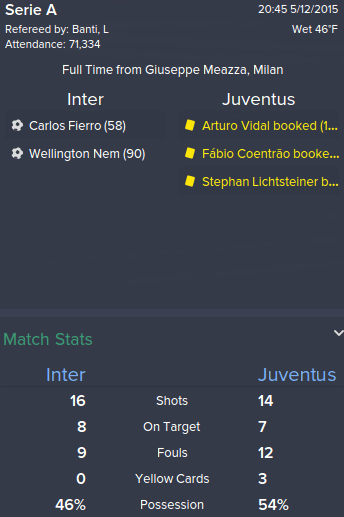 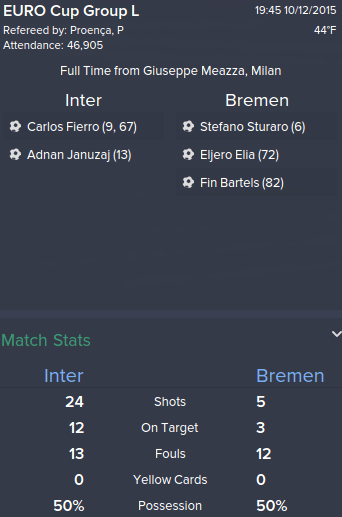 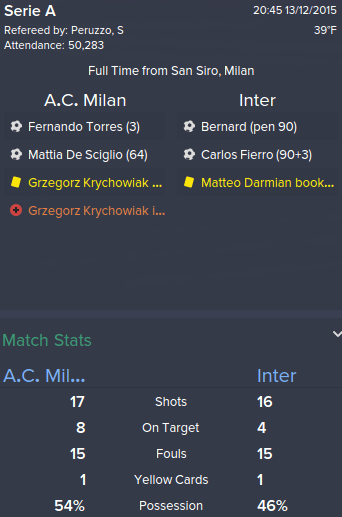 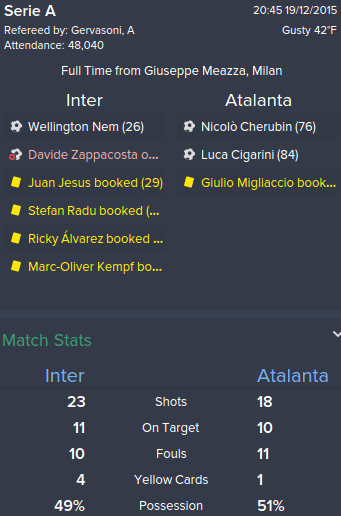 Player of the Month - Carlos Fierro 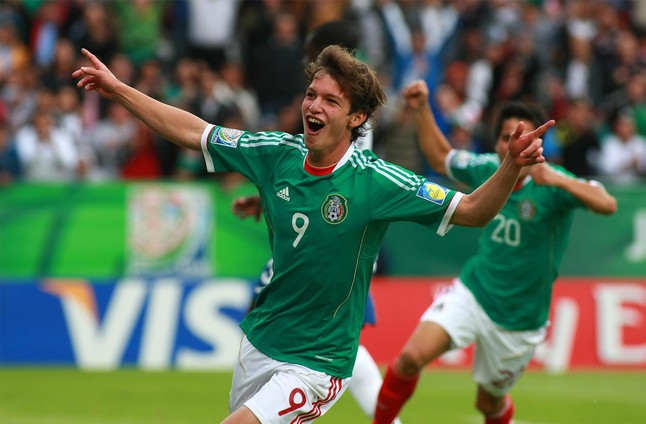 Carlos Fierro had a great month for himself picking up the best award a young player can have by winning the European Golden Boy but he also just picked up the Inter Player of the Month award for the month of December with four goals in four games including the game tying goal at the death to finish off a great comeback for the Nerazzurri when they took on cross town rival AC Milan. 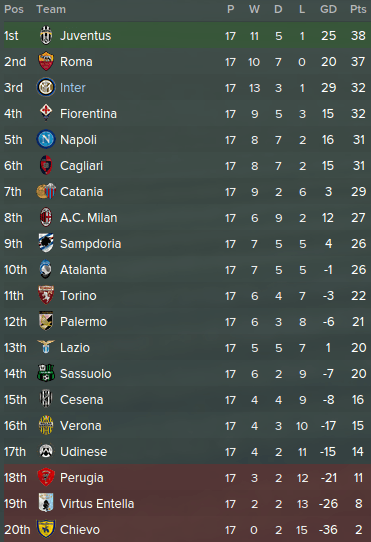 What happened there?
Login to Quote

We struggled to find our form after the Juventus win and couldn't find the winners we needed late.
Login to Quote

Haynesy96
5 years
http://www.fifa.com/mm/photo/worldfootball/clubfootball/01/59/98/93/1599893_big-lnd.jpg
Carlos Fierro becomes the second Inter Milan player to win the European Golden Boy Award in the last two years joining now Manchester City player Mauro Icardi who did it last year. Fierro was stunning all year long for Chivas and Inter Milan scoring 28 goals and 6 assists in the 28 games he was apart of this year.


Inter Milan is only the only club in the world to have two people win the convented award and they did it in back to back years. People are hailing Luis Figo as a mastermind for developing young talent has this is his second European Golden Boy in the last two years, which is a big feat considering no club has ever had a player in the club win it twice. We asked Figo about his development of young players and he said "This is all about Carlos, he deserves this more than anybody by his hard work everyday in training as well as his great mind set that he has to get better everyday. I have just been fortunate enough to already have to great young talents like Carlos and Mauro so early in my coaching career."
Login to Quote

walkinshaw
5 years
Developing young talent...... more like buying but nice work on the back to back for the youngsters and good league start as well.
Login to Quote

Ya I can't deny that haha, I still can't believe I got him for free and six months later he wins European Golden Boy.
Login to Quote


Inter Milan picked up seven victories in eight games in all competitions this month. Inter started the month against Napoli where they played in one of the Serie A games of the year as they picked up a win in a thriller of a game 6-5 as both teams were exchanging blows throughout the day. Adnan Januzaj picked uo himself a hat-trick , Carlos Fierro scored himself a brace and Inler had an own goal to boost the Nerazzurri to victory. They started their defense of the Italian Cup against Atalanta, Inter handled the hosts easily with a 2-0 victory with goals from Bakkali and Fierro. Later in the month they played Milan in the quarter-final of the Italian Cup another game which they handled easily against their cross town rivals in a 3-1 thanks to two goals from Carlos Fierro and one more from Januzaj.


Inter continued Serie A play against Cesena where they scraped away on a Adnan Januzaj goal to win 1-0 over the visitors. Carlos Fierro's hat-trick propelled the Nerazzurri to victory against Palermo 3-0. Inter's only blemish of the month was against Catania where they were only able to manage a 2-2 draw with Bernard and Januzaj chipping in on the day. Next up was Udinese where new $81 million signing Raheem Sterling scored his first goal for his club in a 3-0 victory, Kovacic and Fierro also pitched in goals. Inter finished the month against Verona where Raheem Sterling was able to score himself a brace, van Ginkel scored his first goal for the club and Bernard scored the other one to help Inter Milan get their seventh win of the month and beat Verona 4-1. 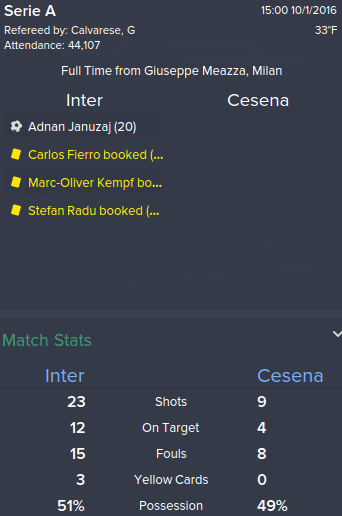 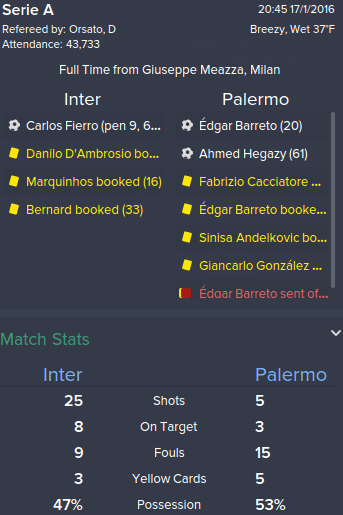 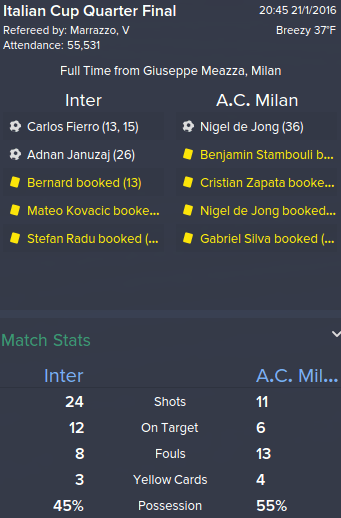 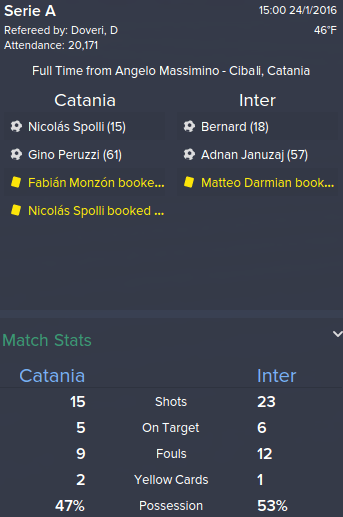 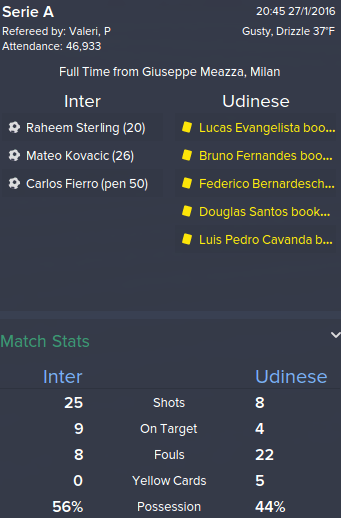 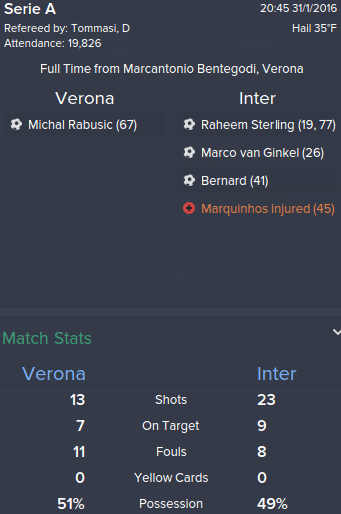 Player of the Month - Adnan Januzaj

http://i.dailymail.co.uk/i/pix/2014/05/26/article-2639887-1E3ACBBF00000578-939_634x511.jpg
Adnan Januzaj led the way for the Nerazzurri in the month of January with five goals and six assists this month for Inter Milan helping them secure seven wins the month of January. His best game of the month was against Napoli when he had two goals and two assists to help Inter become victorious in that game 6-5. Neal
5 years
Awesome story you've got going here! I had my first story with Inter Milan, too, and it warms my heart to see you signed Raheem Sterling as well!
Login to Quote

Thanks, ya I was pretty happy when I was able to get him.
Login to Quote

Justice
5 years
What a month! That game against Napoli must have seen you lose a few hairs!