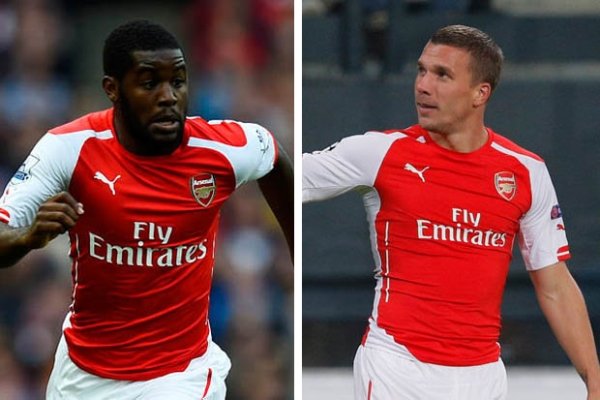 Arsenal duo Lukas Podolski and Joel Campbell are just two of the players who could be heading out of the Emirates Stadium this summer.

The Gunners have a reported budget of £45 million to spend this summer and will look to add to that with the departures of fringe players, as they begin the search for a new defensive midfielder and central defender.

Podolski is thought to be one of main exits this summer, with the wide forward voicing his discontent at the lack of first team football available to him in North London, having joined from Cologne in 2012.

The German international hasn’t quite moulded into Wenger’s plans, wanting to play as a central striker instead of a left winger. Wenger has often opted for Olivier Giroud as his main striker and the arrival of Danny Welbeck and Alexis Sanchez is sure to limit Podolski's time on the field for the Gunners in both positions.

Arsenal will be looking at receiving around £12 million for Podolski, with serious interest coming from Serie A, although a return to the Bundesliga could also be on the cards.

Costa Rican sensation Campbell also has numerous clubs interested in signing him, more notably Newcastle United, Benfica and David Moyes’ Real Sociedad, which would see the forward return to Spain after a loan spell with Real Betis in 2012.

Campbell’s career at Arsenal has been an unfortunate experience, with this season being the only time he has managed to secure a work permit to play in England, being loaned out to Lorient, Betis and Olympiakos in the past three seasons.

Also close to leaving the club are French duo Mathieu Flamini and Abou Diaby, as Arsenal aim to strengthen their midfield.

Flamini joined the North Londoners on a free last season from AC Milan, but Everton has expressed their interest in the holding midfielder, whereas Diaby’s continued troubles with his fitness may finally signal the end of his Arsenal career.
Login to Quote 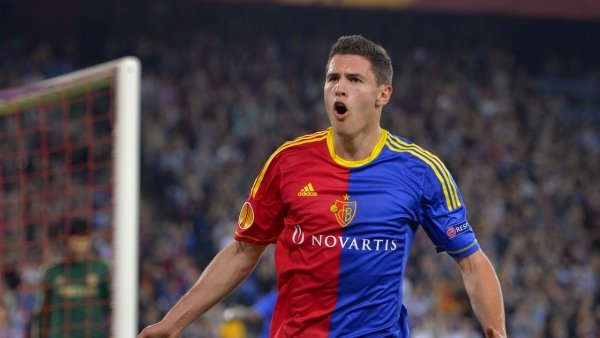 Swiss International and Basel defender Fabian Schär has completed a £5 million transfer to Arsenal, snubbing a contract offer from Serie A club Juventus in favour of a move to North London.

Schär had informed Basel of his desire to leave the Swiss giants upon his return from the 2014 Brazil World Cup, following reported interest from various European clubs, and so agrees to sign a five-year-deal with the Gunners on £50,000-a-week.

The 22-year-old joins Arsenal as the replacement to Thomas Vermaelen, who joined Barcelona for £15 million this summer, and is likely to offer competition to the much used partnership of Per Mertesacker and Laurent Koscielny.

Schär began his professional career with FC Wil in the Swiss Challenge League in 2008, joining Super League champions Basel in the summer of 2012 for £450,000.

The centre back, who can also put a shift in at right back, played 43 times and scored eight goals in his time with Basel, with his goal scoring record also being a key feature at international level with three goals from seven appearance for Switzerland.
Login to Quote

DO OR DIE FOR WILSHERE 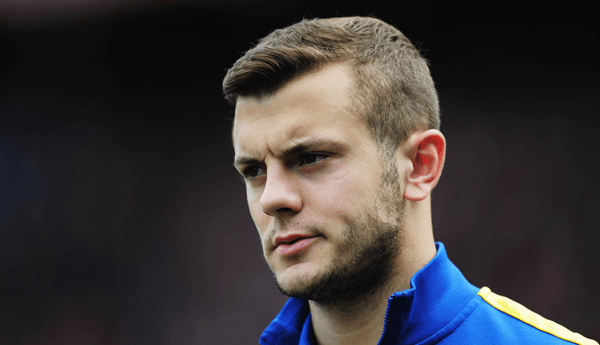 Wilshere emerged as a future star for club and country at just 16 years of age, but has seen his progression as a player plagued by injuries ever since, with his final full season coming in the 2010/2011 season.

Now 22, Smith hopes Wilshere can show this season why he was rated so highly as a teenager, as injuries threaten what could be a very promising career.

“I’d have to say this is the season for Jack Wilshere and his elite career, as there is no more room to lose time with the injuries he’s had.

“He’s clearly been very unlucky with all the ankle injuries and setbacks he’s had, but at the first sign of overcoming these issues, and there were plenty of moments during last season, Wilshere needs to adapt his playing style to protect himself a little more.

“Wilshere cannot be as bullish as he is, attempting to run through two, three, four defenders, because he will be clattered. He needs to be smarter in avoiding these challenges, so that he can show us on a consistent basis what a marvellous player he can be.

“I think Wilshere knows that, and having seen the success Aaron Ramsey had last season, he’ll be desperate for his share. This season is vital for him.”

Wilshere missed the entire 2011/2012 season and parts of the previous two seasons with the Gunners, with nine out of 12 of his most notable injuries being ankle injuries.
Login to Quote

ImDonkey
6 years
Another great story! Keep up the good work (But maybe stick to this one? Lol troll coming from me but k)
1
Login to Quote

ARSENAL_ruleZ
6 years
Decent signing there and I agree, it's make or break for Jack! Hopefully injuries don't get in the way.
1
Login to Quote 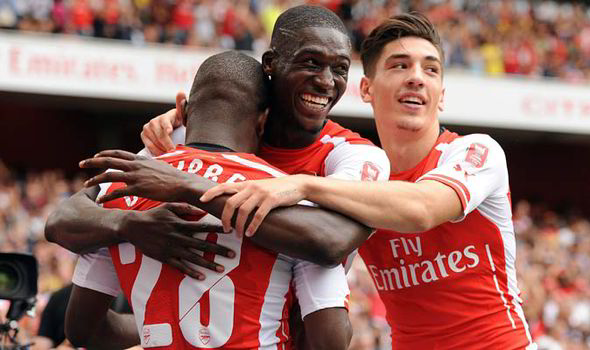 Arsenal trio Yaya Sanogo, Hector Bellerin and Chuba Akpom will all spend the entire 2014/2015 season out on loan, as the three seek regular first team football.

Sanogo, who has had his fair share of injuries since arriving from Auxerre on a free transfer, has agreed to join Ligue 1 club Saint Etienne on loan, with Les Verts agreeing to pay a £100,000 monthly loan fee.

Spanish full back Bellerin follows the Frenchman by agreeing to join FC Nantes for the remainder of season, meanwhile 18-year-old Akpom joins Sky Bet League One side Peterborough United.

Arsenal boss Arsene Wenger has expressed his happiness with the deals and is keen to see how the three progress before returning next season.

“I like all three a lot and feel a loan at this age will be good for everyone. Our first team is growing and game time here is limited, so a loan move is the best option for all of them.

“I expect Sanogo to be fighting for a starting spot at a very good side, and the same goes for Bellerin. They’ll both be playing in a very competitive league for young players, so I’m confident it will be a very positive experience for them.

“Spells in the Championship and League One can be equally good in terms of maturity and progression, so, again, Akpom’s loan is a deal I’m very happy with.”
Login to Quote 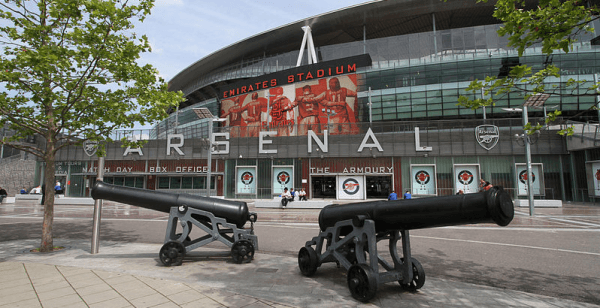 Arsenal are set to complete the signing of much-anticipated defensive midfielder in the coming days, according to former Arsenal player Ray Parlour.

Speaking exclusively to talkSPORT radio this morning, Parlour revealed that Wenger had made the signing of a new holding midfielder his priority this summer and that his reliable source at the club had told him the Gunners were to announce the deal in the next couple of days.

“I’ve been told by a source closely aligned with Arsenal that the club has been pursuing a new defensive midfielder in recent months and that Wenger had finally given the board the go ahead in signing the new player,” said Parlour.

“From what my source tells me, this deal could have been concluded even before the World Cup, but Wenger wanted to make sure every aspect of this signing was squeaky clean.

“Wenger’s given his approval and Arsenal have already agreed terms with both the club and the player. It’s now up to one of the clubs to make it official, as the deal is 99% done.”

Parlour tried his best to keep the player’s identity as anonymous as possible, but the Englishman did let out a crucial piece of information that suggests he may be based in England and that he doesn’t play for a top club.

“From what I understand, this player is keen to better his career and a move to Arsenal suits him well, with them having Champions’ League football.

“This player is very neat on the ball, perhaps not the imposing midfielder some fans may have wished for, but he has proven his worth in the Premier League and his current situation at his current club has eased negotiations for Arsenal.”
Login to Quote

No1VillaFan
6 years
ooo I wonder who it is. Sounds expensive though
Login to Quote

lross
6 years
Loving the updates mate! lot of pressure for this DM to succeed hah!
Login to Quote

pompeyblue
6 years
Schar is a very good signing, considering the lack of defensive cover in Arsenal's squad at the moment, and a defensive midfielder is also a must buy.

Really nice updates Paddy, would the mystery man just so happen to be Schniederlin? I can only wonder...
Login to Quote

mo_123
6 years
i was thinking schniederlin too seeing as they chased him in real life too. He would be a good signing
Login to Quote