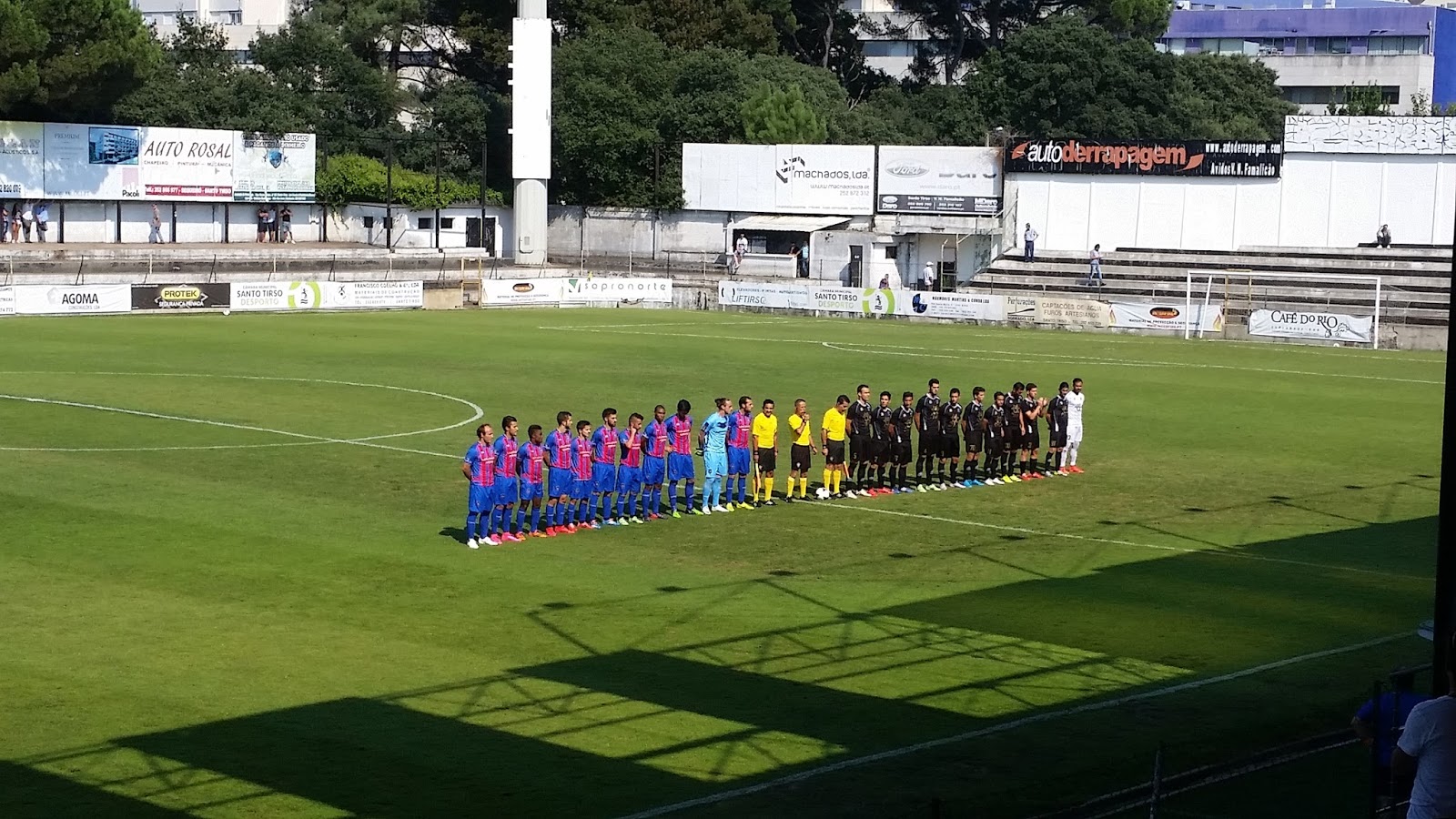 The second half of the Campeonato Nacional's first phase came quickly. For those that don't understand the system with which it operates, the teams are geographically divided into eight groups of ten. The top two of each group progress to the Promotion Stage, the rest into the Relegation Stage. In the former, the teams are split into two separate groups and the winners of each group are promoted, before the second placed teams of each group play off to decided who else goes up. The bottom teams of the relegation groups are demoted to the Campeonato Distrial. The board expect us to be competing in the Promotion Stage, which is a tough ask.

The all important game at Gondomar was lost. We were never really at their level of play and they took advantage of that. The following game, almost equally as important, was drawn to Cinfães and left us trailing well behind the board's goal of the Promotion Stage. It was after this result that I decided we needed to adjust tactically. Following on from part one of the season, we had scored only seven goals in seven games, and judging by the statistics page were creating a clear cut chance every 70 minutes on average. It was not good enough.

Approaching the Salgueiros clash, I felt if we were to reboot our season we needed to play with more adventure. The full backs were set to support and the mentality was pushed forward from Control to Attack. I was relying on the trio of Zé Mario, João Beirão and Jorginho to catapault us back into contention. And did they do just that!

All three of those players got on the scoresheet in our next two games, which we won comprehensively. We managed to score seven goals in less than half the time we'd scored our previous seven as we overcame Pedras Rubas through Zé Mario and João Beirão once again and by now the confidence was well and truly flowing as we came up against a faltering Amarante side.

The side that had been three points ahead at the top of the table were now completely undone by my team as we tore them to pieces. Zé Mario and João Beirão scored the first two yet again before captain Miguelito coolly slotted his penalty straight down the middle for three absolutely massive points.

The 1-1 stalemate at home against Sobrado was a minor blip in our impressive run as Zé Mario continued to run riot. Gondomar, now well and truly the only team competing with us for promotion, were also swept aside with an ease that belied the 2-1 scoreline at the end of the ninety minutes. The first stage of the season was complete with another 2-1 victory over a Sousense side that had beaten us previously. This magical run of form was truly inspiring and magical to watch - some of the football produced was absolutely mouth watering and my decision to go with a more adventurous style of play was vindicated by the players.

The question, however. Was it enough? 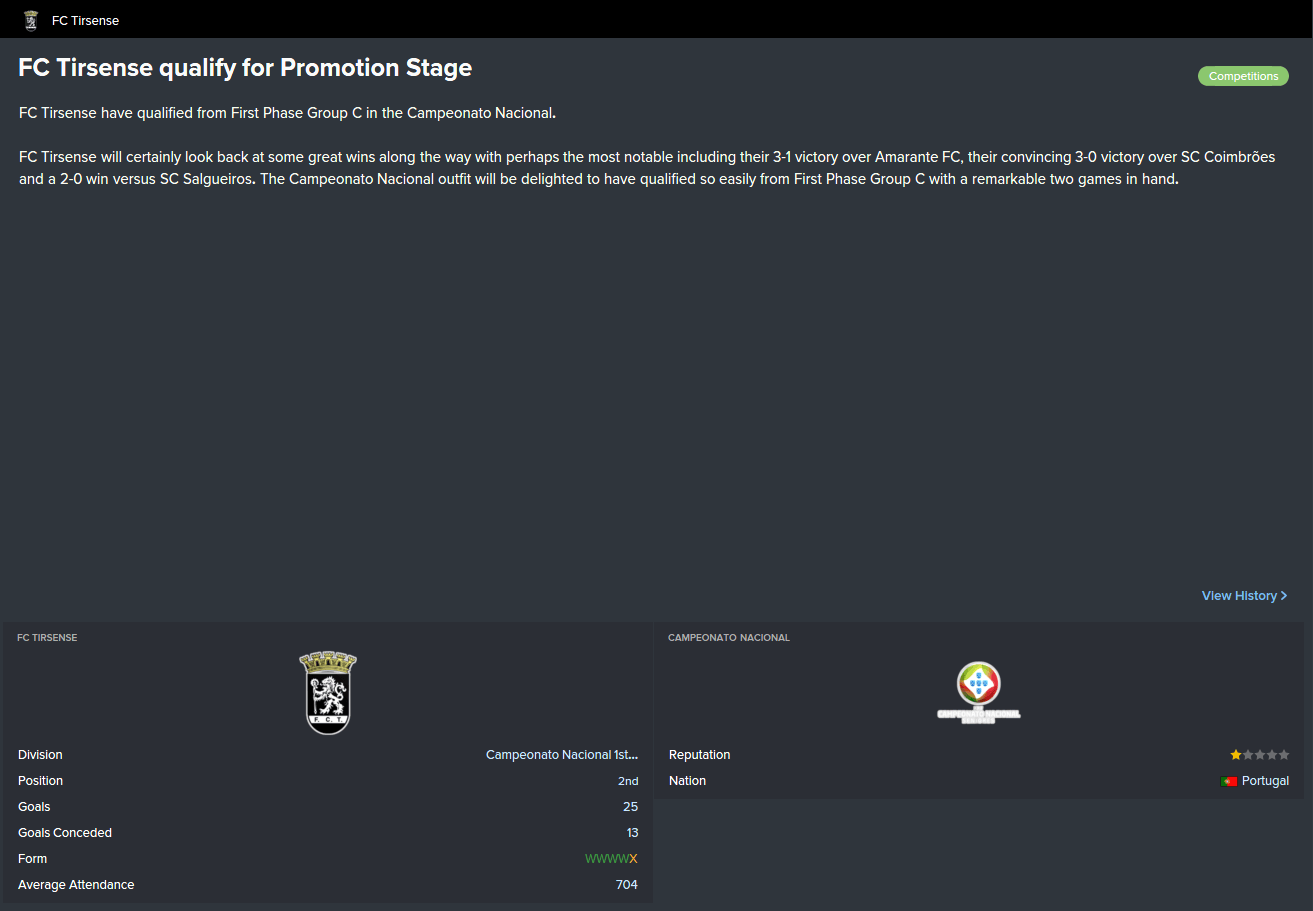 SIIIIIIIIIIIII!!! We made it. That blistering run of form towards the back end of the First Phase of the season was enough for us to overlap an Amarante side that seemed to suffer the opposite wave of form to us. In the end, we qualified very comfortably and actually sealed qualification with two games to spare, which showed how much ours and Amarante's formed differed from part one of the season. They picked up six points, we picked up twenty.

Player of the Season: Part Two 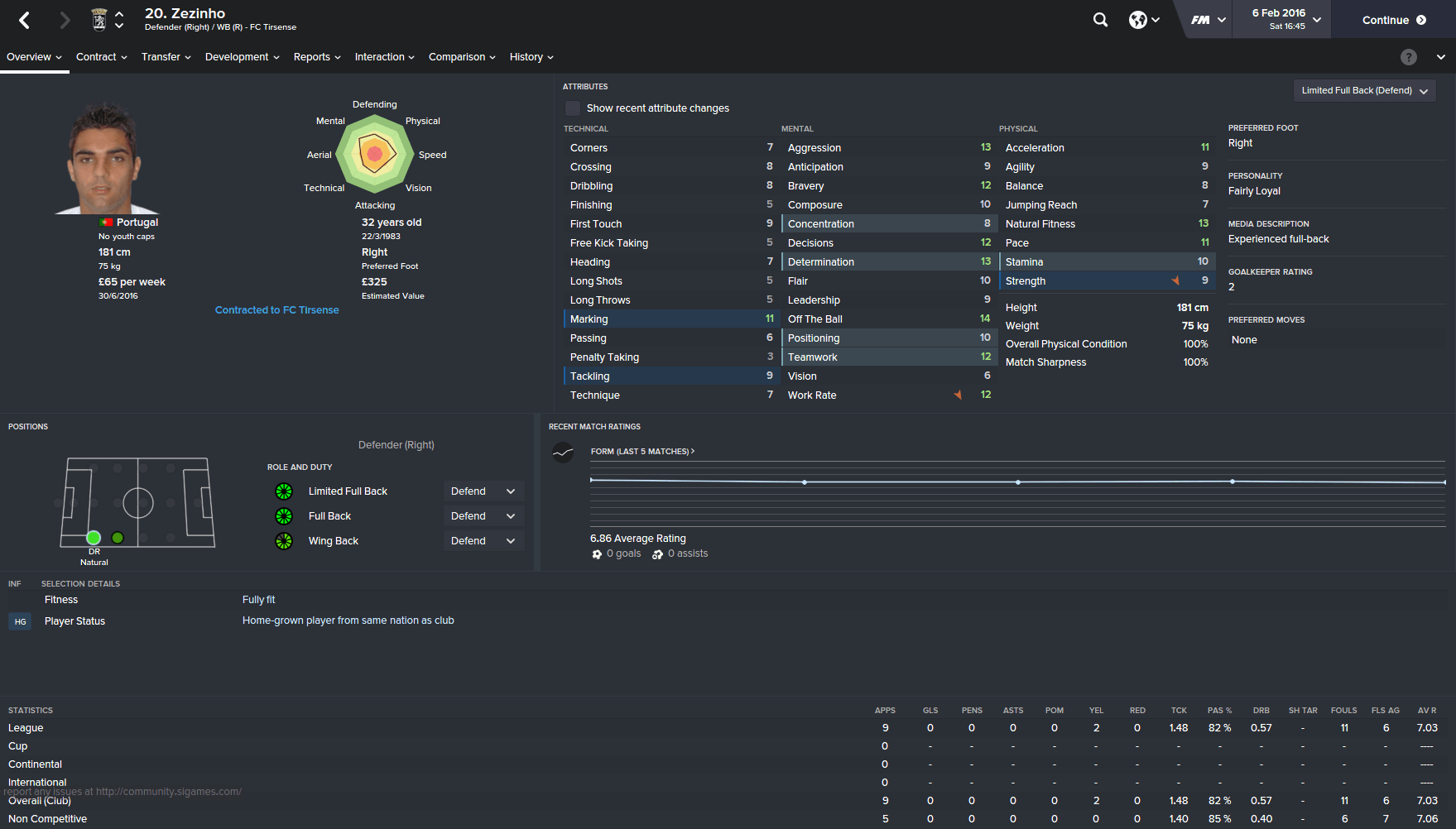 Zezinho may not have scored any goals. Or collected any assists. Or earned any man of the match awards. But it was telling that once the Portuguese right back returned from injury we went eight games without losing, and it was the 32-year old veteran who was the final piece of the jigsaw that was FC Tirsense.

Another stage of the competition - another meeting with Gondomar. It seems our teams are eternally battling it out, but now that we have hit this unstoppable form we go into the match as heavy favourites and I know that we can win, even away from home. Other tough matches in there include Marítimo B, arguably the best team of the Campeonato Nacional in 2015-16, and Trofense, only recently a second tier team
Login to Quote

Feliks
6 years
Good luck in the next stage, loving the rivalry with Gondomar!
Login to Quote

Justice
6 years
Good luck in the next stage, not that Vitor needs luck

Justice
Everyone needs a little slice of lady luck

Live For FM
6 years
What an achievement Walt.....

. But somehow I always end up a failure when I am doing a LLM save

Jack
6 years
Top season there, good luck in the next save mate

Walter
6 years
SooruSooru
LLM is a tough game to crack, it's taken me like 4 editions to get it right

For FC Tirsense, the decision to appoint Vitor Martins can only be seen as a masterstroke at this point in the season. The 34-year old, whose role at the club is his first as a manager, has brought adventurous wing play and poetic possession to the Santo Tirso outfit who can now consider themselves in the running for promotion.

Martins was born in Cascais and began his career at Sporting, making a handful of appearances in three seasons before his contract ended. It was tough for the then 20-year old, a boyhood Sporting fan who is related to founder José Alvalade, but he says it is was a lesson at the same time.

Going on to several regional level teams for the rest of his uninspiring playing career, Martins took a break from the game he loved only to return rejuvenated and reinvigorated. He had a point to prove, this time as a manager.

With few jobs available at the beginning of the 2015-16 season, Martins relied upon Tirsense chairman Fernando Matos to give this young, unproven manager a shot. Matos duly offered him a one year deal with the semi-professional club and gave him full responsibility of everything at the club. Expected to make the promotion stage of the Campeonato Nacional, Martins' passed his first test with flying colours.

It came after a small blip during the middle of the season, but the more Tirsense began to venture forward the better their results became. One touch football became the norm, and before long the team had become a force in the third tier.

"It has been enjoyable, for sure," Martins commented. "The whole rollercoaster of management has certainly been tough, that I will admit. But it is hard not to enjoy every second of it - on the training ground, in the dugout, in your office. Football is my passion - this job lets me live it."

Whether or not Tirsense can push on and achieve what was considered impossible my many pundits and fans alike in promotion to the Liga2 Cabovisão remains to be seen, but what Vitor Martins has shown is that fans can always dare to dream. 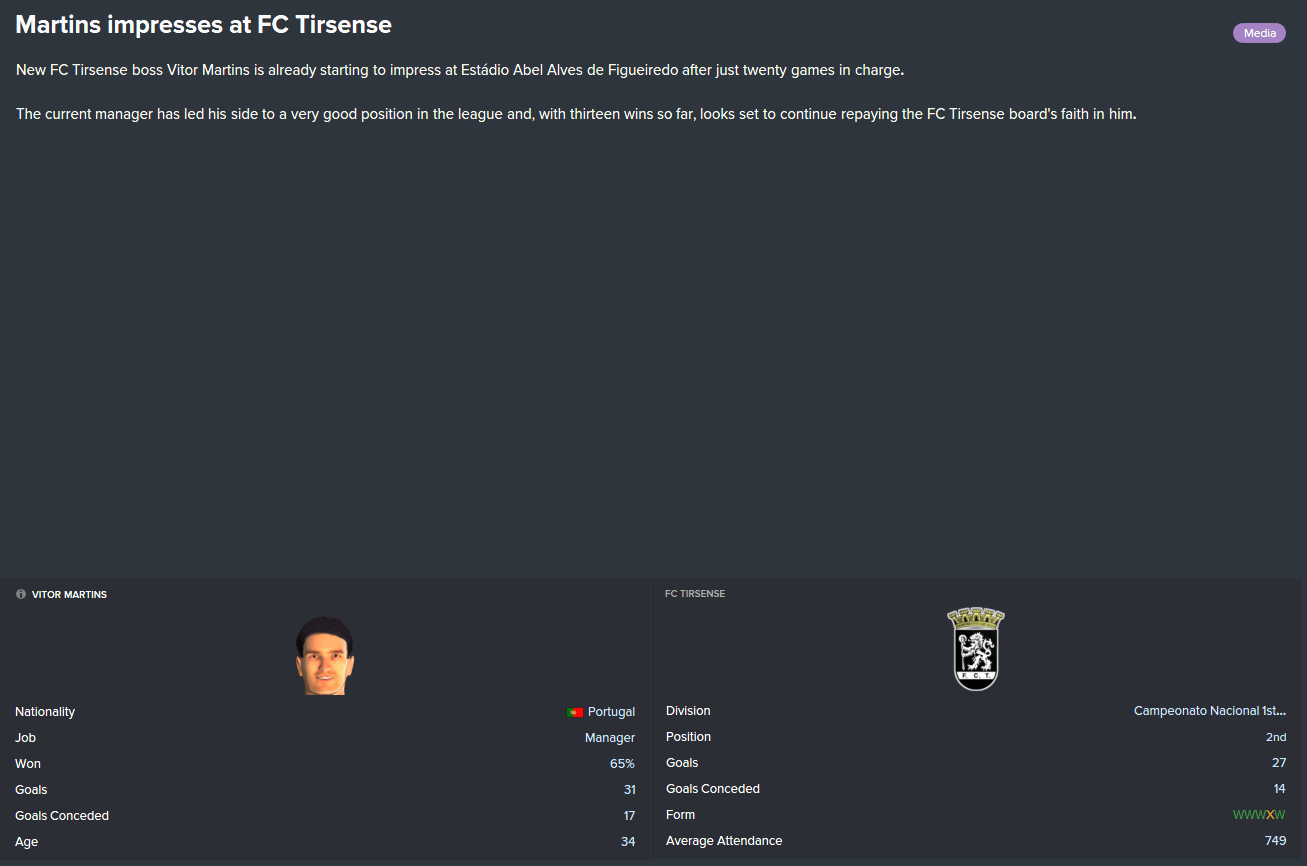 Feliks
6 years
Great job Martins, you're one of the best out there
Login to Quote

C.J.Lippo
6 years
Vitor has managerial mastermind written all over him, wont be long before he hits the big time at this rate!

On a side note, I really didn't like the design your manager thing to start with but, at the very least, I think it can add depth to stories don't you think? To actually see the guy you're rooting for? Just a thought that came from that last post...
Login to Quote

C.J.Lippo
Well I wanted to base the story solely on the manager. One it's something I've never tried before and adds a different perspective to the story. Secondly, I'm not going to be at one club, so instead I am focusing on Martins' and his career. I really wanted to explore the character and I think this is the best way to do it. When you say 'to see the guy you're rooting for', that is exactly what I want.
1
Login to Quote

Walter
6 years
Justice
Thanks, they're top notch.
Login to Quote

Live For FM
6 years
Hey Walt. The manager's pretty good. But your dressing must be trendy.... I mean my manager has red tracksuit, green shirt and white pant. It looks very attractive in the stadium...