DangerZone
That is an interesting perception

It's not meant to be sarcastic, but I think the italics gives it a more personal, intimate feel - almost like writing in a diary or the thoughts in someone's mind - which is what I was trying to achieve in that update

C.J.Lippo
Thanks CJ, hopefully an opportunity will present itself soon.

Verdinho
Hopefully I get that chance one day in the save

Justice
6 years
A splendid start to the story, brilliant stuff!
1
Login to Quote

Live For FM
6 years
This is the best treat ever!!! Stories from Walter, Justice, Feliks, Lippo all at the same time. Enjoy reading these.... Lost In A Fairyland...........
Login to Quote

Walter
6 years
SooruSooru
Yes it really is, lots of great stories are starting to pop up, hope you enjoy

Right now, nobody knows my name. My reputation within Portuguese football is at the very lowest point but I am determined to change that. It will not happen overnight and I am prepared to work hard to earn opportunities within the game, but what I can tell you is that one day I will be in the discussion as one of the best managers this league has ever seen.

Being a fan for so long, I believe that attacking football should always be the main focal point of any club managed by myself. I would rather go for a second goal than preserve a 1-0 lead, and I would prefer to go all out in an attempt to win the game if the scores are even with time running out. You could call it purist, adventurous, it is just how I see the game.

Formation wise, I believe the 4-1-4-1 is the formation that compliments my style of play and philosophical view on football. In defence, it allows every player to be behind the ball and maintain shape. In possession, this formation gives us numbers to control the ball at any pace and in attack, the team goes overload and players have the freedom to do as they see fit in order to create chances. This is not to say I cannot adapt to any given situation and I believe I have a firm tactical understanding of the game and will not be stubborn when creating a game plan. 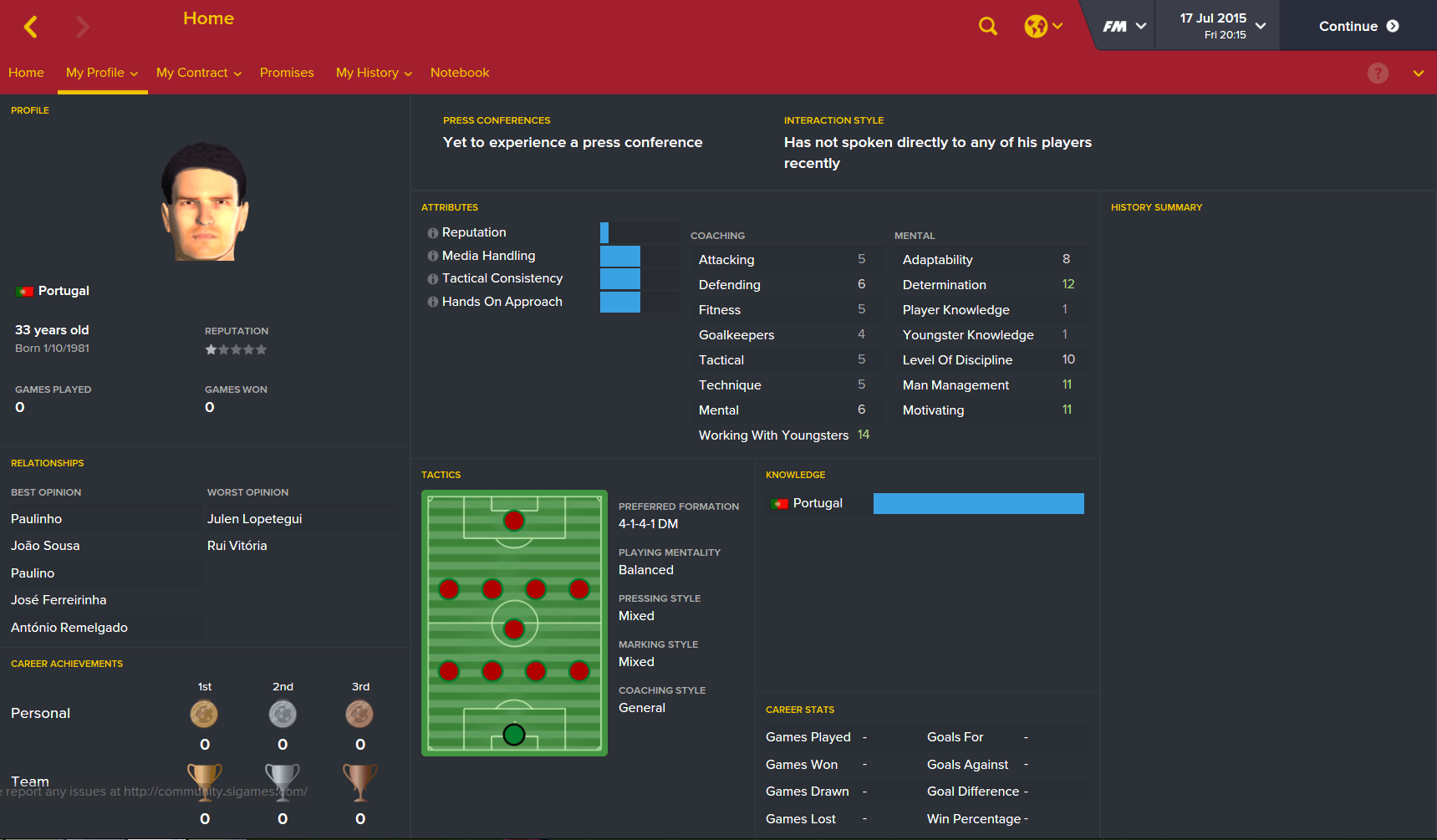 On the training ground, I expect a lot from my players. I demand a high work ethic among the squad, but I will not overwork them to the point where training becomes laborious and creates injuries. Often, I will be creative and inventive with my training methods in the hope that players enjoy it and do not see it as a chore.

In the dressing room, I want every player to know that they can talk to me and feel free to discuss issues and be open with their thoughts. Discipline is key, but I am no dictator and will act like a tyrant. I have been a player, as well, so I can relate to them. I will treat players with respect and courtesy but will also not tolerate any dissent or misbehaviour. 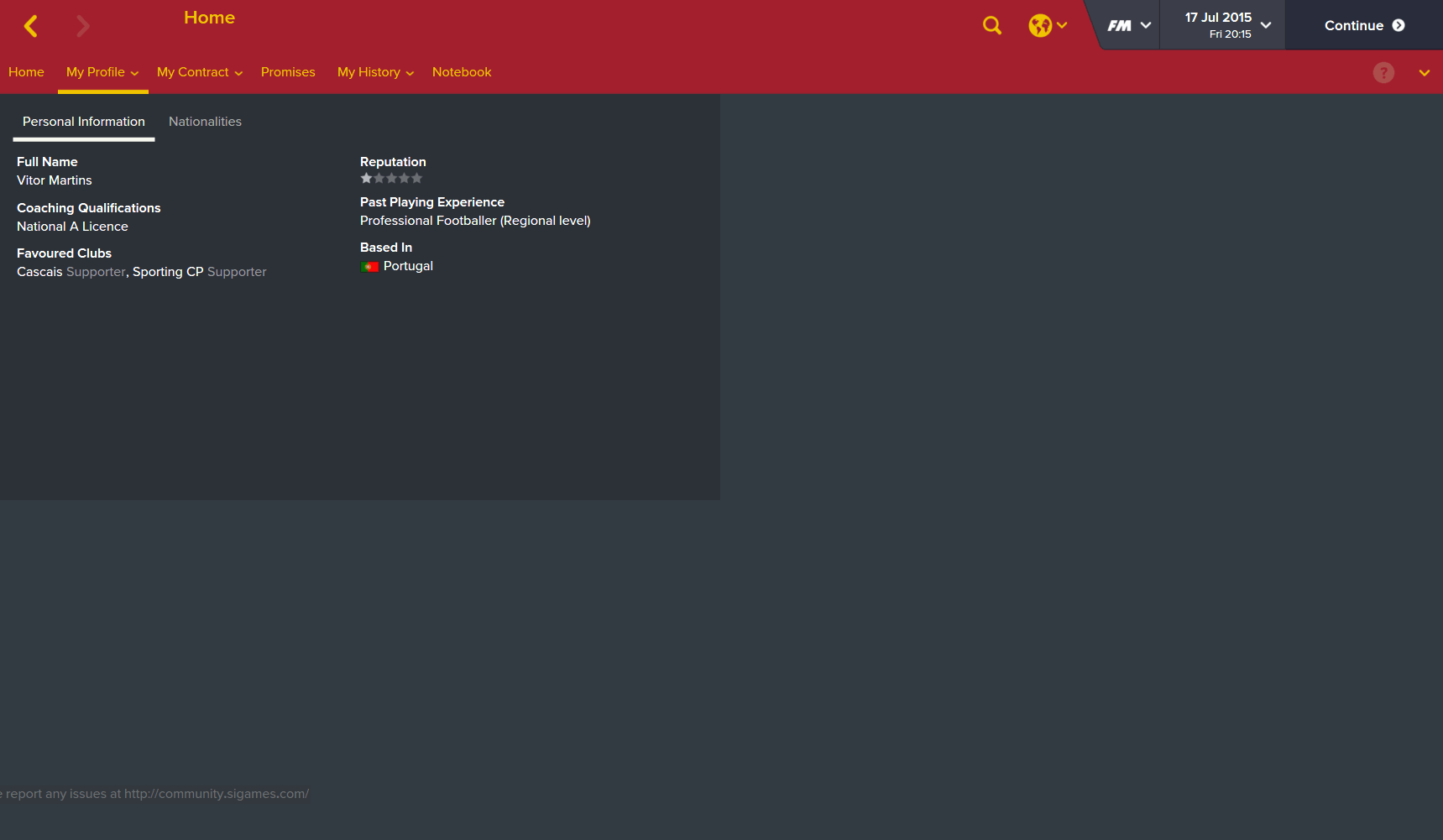 Finally, I will always cast my eye to youth. Just like how Augusto Inácio gave me my chance against Farense, I am a firm believer that age should not be a hindrance to anyone in my squad and I am devoted to developing young players on and off the pitch.

Managerially, I know I have little to no experience. However I am hoping that you will look past this and instead see what I can bring to the table which is creativity, balance, energy, determination and ambition. I am desperate to enter the football management world and I hope you will give me an opportunity to make a start.
Login to Quote

C.J.Lippo
6 years
Is it just me or does Vitor look seriously pissed in his profile pic?

Anyway, some great philosophies there mate, cant wait to see them in action!
Login to Quote

C.J. Lippo
It's funny, I picked up on it too and he does indeed look a bit angry - in game once Vitor gets a job he starts to smile

Verdinho
Hopefully Jorge Jesus can follow in his footsteps

SooruSooru
thanks
Login to Quote

Feliks
6 years
Lovely managerial description Walt, really getting an insight into the man that is Vitor Martins.
Login to Quote

Justice
6 years
A very well-crafted introduction for sure, hopefully your tactical nous will come to the fore in what could prove to be a very trophy-laden career

Walter
6 years
Feliks Ah but there is much more to Vitor Martins than meet the eye, maybe a little trivia update soon?

Justice Hopefully there will be many, many trophies to come.
Login to Quote

As the new season approaches clubs will usually have already have a manager employed ready to begin his season both in the transfer market and on the training pitch. Not often does a team go into preseason without someone at the helm. For two clubs in the lower reaches of the game, however, this was different. 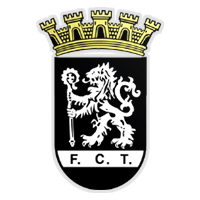 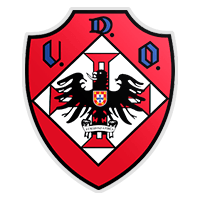 FC Tirsense and U.D. Oliveirense were both without a manager at this point of the campaign. Both of these clubs had adverts set up for applications but first I had to consider my options and decide whether it was worth jumping straight into the management game, were these clubs to my liking or if I could even get a job at all.

The former is a club based in Santo Tirso, a city within the Aves Valley in northern Portugal. Tirsense were founded in 1938 andplay at the Estádio Abel Alves Figueiredo, a 15,000 all seater stadium. Financially, things look fairly bleak and the club have a solid history within the game. They famously knocked my boyhood team, Sporting, out of the Taça de Portugal back in the 1948/49 season - when Sporting boasted Os Cincos Violinos, the legendary quintet. Tirsense are a semi-professional team and, after four seasons of finishing second, have finished 9th and 7th respectively in the past two seasons. They compete in the Campeonato Nacional - the third tier of the Portuguese football league system - and maintain a fierce rivalry with parent club Desportivo das Aves.

In addition, União Desportivo Oliveirense, commonly referred to as just Oliveirense, are a Portuguese football club founded in 1922. They, likewise with Tirsense, are based near the city of Porto - specifically a small city named Oliveira de Azeméis. The Estádio Carlos Osório is a 5,000 capacity all-seater stadium which is currently in poor condition. The club possess average corporate facilities, adequate training, youth facilities and junior coaching as well as basic youth recruitment. Historically, A.D. Sanjoanense are considered the team's biggest rival, as well as Feirense and Cesarense. In the Liga2 Cabovisão, Oliveirense compete above Tirsense and are predicted by many media outlets to finish just outside the relegation zone, much like the past two seasons.

Essentially, it may be worth sending an application to both of these clubs as it would increase my chances of getting an interview and it would show plenty of ambition, to say the least. Although realistically, Oliveirense are most likely a step too far for me at the present time and I honestly cannot see myself beating a manager like Henrique Calisto to the job which the pundits list him as a favourite for. In fact, I am not in any discussion for either job.

Nonetheless, I feel now is the right time to begin my football management career. Being handed a team that is low on confidence and struggling for form halfway through the league season seems like a lost cause to me, and I would much prefer to be able to mould a squad from the start of the season and set the wheels in motion. Therefore, I will apply for the Tirsense job, but I cannot guarantee they will even so much as reply.
Login to Quote