@Griffo thanks mate but it gets worse

Jack
6 years
Very decent month is that, keep it up man

@Jack thanks mate, still lots to come!
Login to Quote

Paris Saint-Germain strolled into the Coupe de France Final where they will meet FC Lorient after overcoming Olympique de Marseille with ease at the Stade Velodrome. With the Marseille players showing signs of distraction ahead of a big game against Lille at the weekend, PSG took full advantage although it took them 57 minutes to find the breakthrough as Angel Di Maria played a fantastic ball into the area with the outside of his foot. The delivery was met by the head of Uruguayan forward Edinson Cavani who placed a bullet header into the top corner of the goal to give PSG lift off. Marseille offered little resistance to the Parisians dominance and the lead was doubled after 76 minutes when Viktor Fischer capitalised on uncertainty in the Marseille defence and cannoned the loose ball past Begovic to make it 2-0 and to seal PSG’s place in the Final at the end of the month in the Stade de France.

Olympique de Marseille full back Benjamin Mendy has surprised L’OM supporters by writing a letter to the clubs fans, published in the latest match day programme for the game against Bordeaux, after his costly red card in the previous game against Lille OSC. In his letter the French left back declares: ”I fully regret my actions against Lille and it sickens me the repercussions that it might have on the team and what we can achieve today. The lads did well to gain a point in the game against Lille but maybe if we had 11 players on the pitch we could have grabbed the three points. Hopefully we can keep up the challenge and achieve our dreams this season but once again I would like to state how sorry I am to both my team mates and everyone who has put in so much hard work for this club to where it is.”

Despite Mendy’s red card in the 8th minute, Marseille did manage to claim a point against Lille, and did even take the lead through Romain Alessandrini. However despite the point, PSG’s win in their game meant that the current French Champions reclaimed top spot in Ligue 1 and would secure the championship with two wins from their remaining two games.


Hi Guys, the latest post was the 100th update on this story and I just want to take this chance to say thank you for everyone who comments and reads, whether it be regularly or not, this story. I'm having an absolute blast writing it and there is still plenty more content to come and hopefully we'll be able to topple PSG in the not to distant future.

Jack
6 years
It's been a delightful read so far to say the least!
1
Login to Quote

43: Nathan
Benjamin Mendy’s red card after only 8 minutes may have cost Olympique de Marseille dearly in their hunt for the Ligue 1 Title as they could only struggle to a draw with Lille whilst PSG secured the victory that moved them back to the top of the table. Mendys late tackle on Mauricio Cuero in only the 8th minute earnt him a straight red card meaning that Marseille had to play 82 minutes of the game with only 10 men, as Michy Batshuayi was subbed off to be replaced by Franck Tabanou. However that didn’t stop Marseille from taking the lead in Northern France as Juan Manuel Iturbe released Romain Alessandrini in space as the French winger cut inside and fired a powerful effort past Vincent Enyeama to give Marseille the lead and make it look like Marseille were heading to an unlikely victory. However just six minutes later Lille were level as Chelsea loanee Nathan curled a beautiful free kick over the Marseille wall and past Begovic in the Marseille goal to secure a point for Lille and move Marseille back down to second in Ligue 1 with only 2 games to play.

On a day that should have been seen as a celebration of sorts, after qualification for the Group Stage of the Champions League was secured, Olympique de Marseille fans were left feeling extremely frustrated after a boring 0-0 draw at the Stade Velodrome. In a game that Marseille needed to win to keep their fading hopes of the Ligue 1 Title alive, they barely mustered a decent effort apart from one in the 77th minute when Remy Cabella’s header was ruled out for offside. With the game ending at 0-0 and PSG beating Sochaux 2-0 the title was all but handed to the Parisian side, as Marseille would need to win and hope PSG lose, as well as there being a huge swing in goal difference on the final day, if L’OM were to take the title this season.

88: R. Alessandrini
Olympique de Marseille finally earned something against a side that they had previously lost three consecutive ties to in Troyes AC to end their season on a high note, despite losing the Ligue 1 Title race to Paris Saint-Germain. In a drab first half though neither side really looked like gaining the upper hand as Marseille seemed to concede that any chance of them winning the title was over, and the deadlock would only be broken in the 48th minute when Philipp Hosiner managed to head home from a delightful cross by Calve, to the dismay of the Marseille fans who had been hoping for an easy win to at least give PSG a slight shake up. However just 10 minutes after Troyes took the lead, Marseille pegged them back as Remy Cabella set Romain Alessandrini up to smash home the equaliser and make it look like Marseille were going to end Troyes winning run against them. However in the 88th minute Marseille finally took the lead as Brice Dja Djedje this time delivered a superb cross into the box to give Romain Alessandrini the easiest tap in possible to give Marseille the lead and their first victory against Troyes under Christophe Galtier’s rule. Unfortunately for Marseille though, PSG battered Montpellier in their final game and as such it was PSG who were crowned French Champions for the first time under former Marseille boss Marcelo Bielsa. 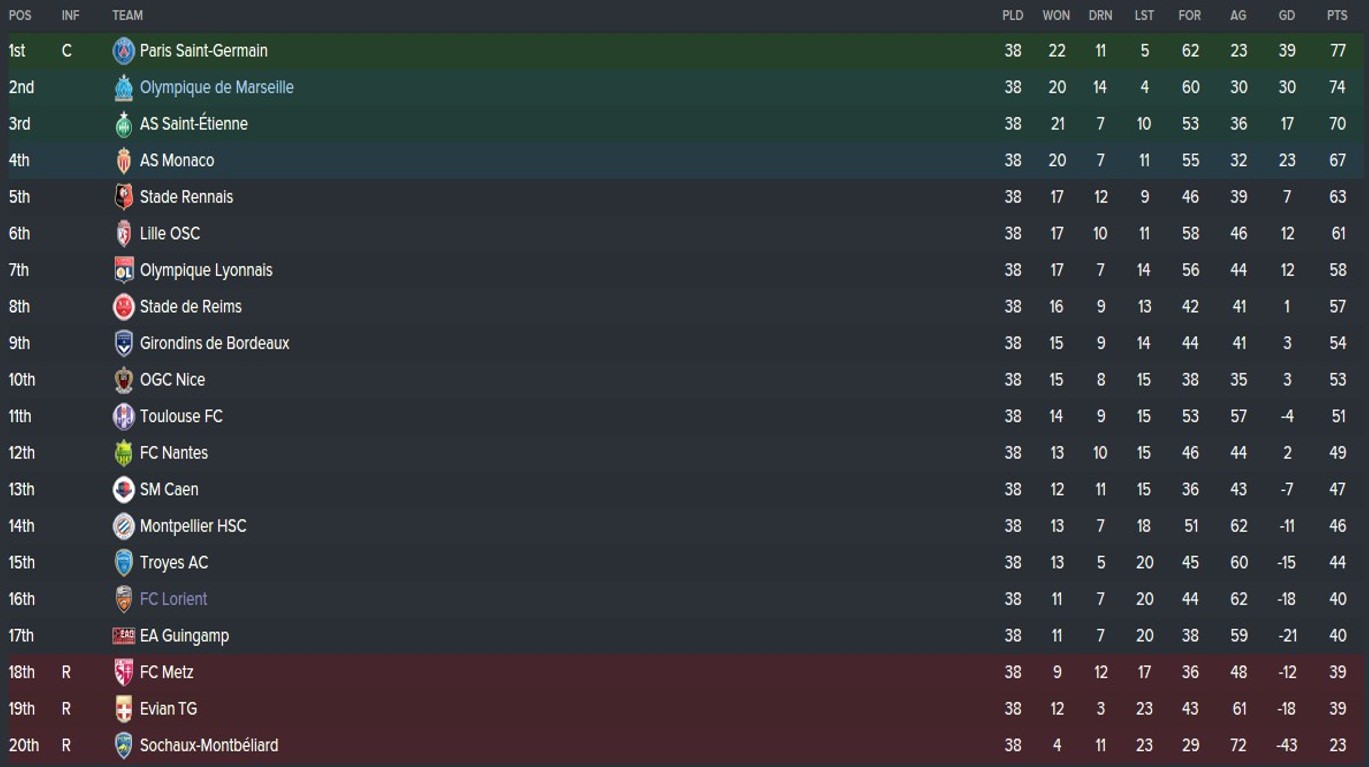 
A pretty poor and drab end to the season where we whimpered into second position and just let PSG grab the title. We were never at the races for the first two games although the Lille game might have been different if we’d been able to play the majority of it with a full 11 players but there is no point dwelling on the past. In the grand scheme of things, PSG won their final 2 games but if we’d beaten Bordeaux things may have been different so ultimately it was the three consecutive draws that meant we didn’t pick up anything this season. To end our poor form against Troyes was something though even if they did take the lead so at least we finished the season on a positive note. In the Coupe de France we did whimper out of that too as we tried to secure that league title but ultimately we perhaps should have put more emphasis on it, because we could have won the competition on another day. To qualify directly for the Champions League though is perfect and exactly what we wanted to do and not having to go through the Qualifying Rounds will give us a full pre-season next season which we will be thankful for. In terms of this summer, we will continue to build on what we have and hopefully come back next year with an even stronger squad. 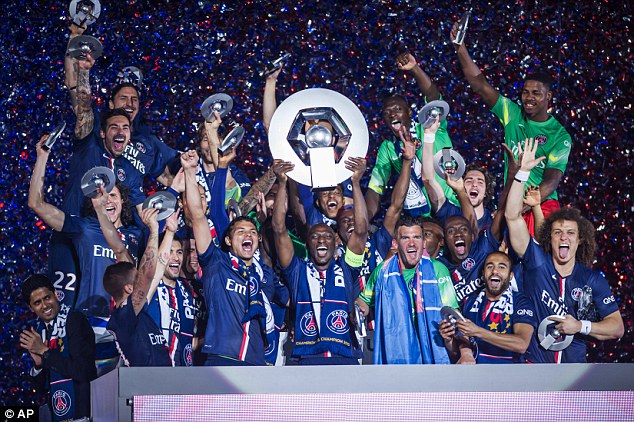 Paris Saint-Germain have been crowned the Champions of France for the fifth consecutive season after finishing the 2016-2017 season 3 points clear of nearest rivals Olympique de Marseille. After a 4-0 crushing of Montpellier at the Parc des Princes on the final day of the season, the home fans went wild as they knew no matter how Olympique de Marseille fared against Troyes they would be lifting the trophy and celebrating long into the night.

Zlatan Ibrahimovic was once again the clubs top scorer in the league this season, bagging 22 goals in another impressive season, whilst key players such as Angel Di Maria, Edinson Cavani and Bernard had extremely impressive seasons too.

The title win would also have been more pleasing for manager Marcelo Bielsa who managed to secure the league title in his first season. The Chilean manager expressed his delight of ”Securing the title is fantastic and hopefully we can carry on, on the road to becoming a giant club and we can keep winning titles like this. Commiserations to Marseille but now we just have to focus on ourselves and keep winning titles like this.”

Griffo
6 years
Straight up heartbreak... still an incredible season though!
1
Login to Quote

mgriffin2012
6 years
Yeah was gutting man but we'll come back stronger next year!
Login to Quote

Jack
6 years
It's been a wonderful season for you but so unlucky to lose out on the title - onto the next!
Login to Quote

mgriffin2012
6 years
Thanks man! Heartbreaking to lose out so close to winning it but we'll come again next year!
Login to Quote

With the 2016-2017 season having finished not so long ago, Olympique de Marseille have made their first moves in the transfer market by announcing the signing of Belgian midfielder Mousa Dembele on a pre-contract agreement that will see him move to the Stade Velodrome when his contract at Tottenham Hotspur expires in the summer. Dembele who has made 74 appearances for the Belgium national team, will join Marseille on a 3 year contract on July 1st and will hope to help inspire Marseille to silverware in his first season at the club. With the World Cup in Russia coming up, the midfielder will be hoping to play plenty of football at a club with a packed midfield including the likes of Jonas Martin and Mario Lemina, Marseille’s newest acquisition will be hoping his performances at the Stade Velodrome can secure his place on the plane to Russia in the summer.