The draw for the Ninth Round of the Coupe de France has been made at the FFF headquarters in Paris. The tie of the round is by far Alain Casanova’s new look Olympique Lyonnais side hosting one of his former sides in Toulouse, in a game where either side could progress to the tenth round. Ligue 2 side Paris FC will host struggling Troyes AC in what could be one of the most fascinating ties, and one of the more likely games to see a shock result. For Olympique de Marseille the draw has thrown up a repeat of the Coupe de la Ligue Fourth Round fixture, meaning Christophe Galtier’s men will visit Ligue 2 side Evian for the second time in a matter of weeks.

mgriffin2012
6 years
You'd hope so but stranger things have happened 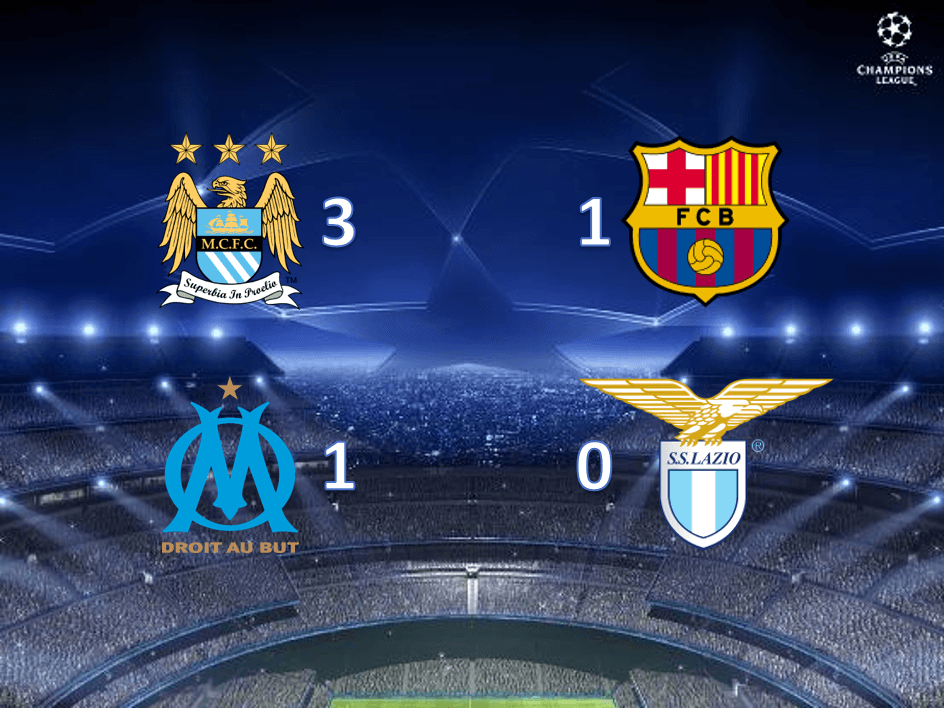 The final whistle has been blown on the Group Stages of the UEFA Champions League and in Group E it is Olympique de Marseille who top the group and will therefore be seeded going into next weeks draw for the knockout round. The only goal of the game at the Stade Velodrome came in the 30th minute as Brice Dja Djedje delivered another assist, this time for Islam Slimani whose powerful header ricocheted off the cross bar to give Marseille a 1-0 win which saw them secure 1st place in the group.

At the Etihad Stadium, Manchester City claimed their place in the UEFA Europa League with a surprising 3-1 victory over Barcelona. Sergio Aguero got the scoring under way in the 17th minute with a fantastic free kick which flew past Marc-Andre ter Stegen in the Barca goal. It remained 1-0 until after half time, when in the 67th minute Aguero turned provider for Kevin de Bruyne who lashed the ball past ter Stegen to give City a 2-0 lead. However just a minute later Lionel Messi had slipped Ivan Rakitic through in space, and the Croatian slotted home from 14 yards out to give Barca a lifeline. However the Catalan giants hopes of equalising were soon ended in the 76th minute as Sergio Aguero, performed a Messi-esque run through the Barca half before dinking the ball into the bottom corner to give Man City a 3-1 lead that put them comfortably through to the Europa League and saw Marseille top the group.

Olympique de Marseille top the group then after a comfortable 1-0 victory over Lazio and Barcelona’s defeat in Manchester. Barcelona will be unseeded and will face one of the other group winners in the knockout stages, whilst Manchester City fall into the Europa League. Lazio are out of European competition completely for this season.

Griffo
6 years
Amazing performance in the group stage although it doesnt matter unless you can do the job in the knockout rounds!
Login to Quote

Cheers man, hopefully it does and hopefully we'll be able to make an impact in the knockout rounds now too!

Cheers mate! Yeah hopefully theres something big coming in the Round of 16 for us!

Thanks mate, wasnt easy by any stretch of the imagination!
Login to Quote

The people in charge at UEFA have drawn the teams out of the hat for the Round of 16 for the UEFA Champions League with some mouth-watering ties drawn out of the hat. With the Group Winners being guaranteed to play the second leg at home, the 16 teams left in the competition have been split into two pots of 8; the Group Winners in the Seeded pot and the Group Runners up in the Unseeded Pot.

Some giants of European football are in the pot as Atletico Madrid, Chelsea and Juventus being represented. There are 16 competition wins between Real Madrid and Liverpool, whilst the rest of the pot is made up of the only French Winners Olympique de Marseille, Sevilla and Benfica.

The giants aren’t only found in the seeded pot, as FC Barcelona and Arsenal are in the unseeded pot. 2013 finalists Borussia Dortmund also finished second in their group so will meet one of the group winners. Galatasaray, Leverkusen, Olympiakos and Schalke make up the pot whilst Red Bull Salzburg are in the Knockout Stages for the first time.

Some extremely interesting ties in the Round of 16. Five times winners FC Barcelona host SL Benfica themselves two times winners. Olympiakos meet Liverpool in a repeat of the classic game from the Group Stages in the 2004-2005 season, and Schalke host Real Madrid in some of the most fascinating ties of the round. For Olympique de Marseille who came through an extremely tough group, Galatasaray are the opposition with the first leg being away in Istanbul in February.

There you have it then, the draw for the First Knockout Round of the UEFA Champions League. The first legs will be played on the 13/14th & 20th/21st of February with the return legs being played on the 6th/7th & 13th/14th March.

Griffo
6 years
I would be pretty happy with that draw to be honest, I think you can easily cruise on through to the next round!
Login to Quote

Yeah it's a favourable draw and one we can be optimistic about!
Login to Quote

It's going to be two really interesting ties mate, looking forward to it for sure

Olympique de Marseille laboured into the Quarter Finals of the Coupe de la Ligue with a 2-0 extra time victory over Ligue 2 side Evian TG. In a tight game at the Parc des Sports it took until the 95th minute for the Ligue 1 giants to take the lead when Brice Dja Djedje played a pacey cross into the area, which found its way through a crowded penalty area which was eventually met by the right foot of Jonas Martin who made it 1-0. Then just 8 minutes later, the scoring was finished as Edwin Cardona found Mousa Dembele at the edge of the area who lashed the ball into the goal to score his first goal for the club and put Marseille into the Quarter Finals.

The draw for the Coupe de la Ligue Quarter Finals has thrown up some extremely interesting ties. Zinedine Zidane will return to Saint-Etienne with his new PSG side, whilst Stade Rennais will entertain Toulouse. Olympique de Marseille will host Bordeaux, whilst AS Monaco will welcome Olympique Lyonnais to the Stade Louis II, as the competition begins to really heat up.

Griffo
6 years
Get around Le TFC!
Login to Quote