Justice
6 years
Monaco seem to be your biggest threat for the title, hopefully you can get one over them as the season progresses.
Login to Quote


Yeah was a real kick up the back side! Wasnt pleasant watching but hopefully we can recover from it!

Yeah out of them and PSG, they're certainly looking the most dangerous!
Login to Quote 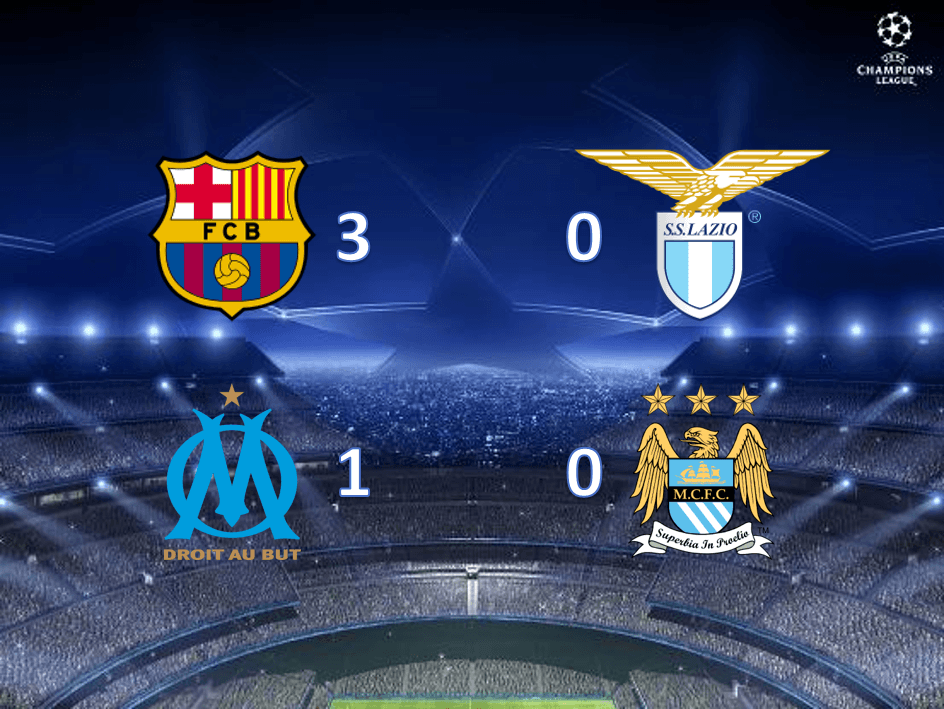 At the Camp Nou, on matchday 4 of the UEFA Champions League Group Stage, FC Barcelona took a big step towards qualifying for the knockout stages of the competition. The Catalan giants were able to secure an outstanding 3-0 victory over SS Lazio thanks largely to Luis Suarez’s double alongside Carlos Vela’s goal. However it took 45 minutes for the Mexican to give Barca the lead as he capitalised on a fantastic aerial through ball from Lionel Messi and smashed the ball past Mattia Perin in the Lazio goal to give Barcelona a crucial lead. Jordi Alba was the creator for Barca’s second goal as he put a fantastic cross straight onto the head of Suarez who powered a bullet header past the young Italian goalkeeper to make it 2-0 to Barcelona. When Lionel Messi received the ball from Alessandro Florenzi in the 75th minute, the Argentine magician slipped a fantastic through ball to Luis Suarez who placed the ball in the far bottom corner to give Barcelona a massive 3-0 victory which gave the Spaniards a very firm grip on second place in the group.

Elsewhere in Group E, Olympique de Marseille carved out there second shock victory of the Group Stages with a 1-0 victory over top seeds Manchester City. The English champions never really threatened Christophe Galtier’s men and the breakthrough came in the 38th minute when Lassana Diarra delivered a perfect free kick onto the head of Lucas Ocampos who headed the ball down for club captain Loic Perrin to nestle in the back of the net on the half volley. The victory meant that Marseille returned to winning ways after two successive defeats in Ligue 1, and kept their dreams of qualifying from the toughest of groups well and truly alive.

Victories for both Barcelona and for Marseille sees the top two further secure their places at the top of the group and now both sides look likely to book places in the knockout stages of the competition. Marseille sit top with 8 points from a possible 12, 4 points clear of third placed Manchester City meaning that if Marseille can beat either Barcelona or Lazio in their remaining two games they will qualify. Barcelona sit second with 7 points, three clear of Man City and look likely to qualify, especially with a crucial game at the Etihad coming up to end the Group Stages. Manchester City occupy third and, unless Lazio can do something special in their remaining two games, look likely to be the only side challenging the top two for a place in the Round of 16.

On matchday 5, the top two in this group clash at the Camp Nou as Barcelona host Olympique de Marseille. For Marseille, victory would ensure a place in the Round of 16, whilst for Barcelona, picking up the three points would put them on 10 points and would guarantee a place in the knockout stages if Man City failed to beat Lazio at the Stadio Olimpico. For those two, Lazio need to win if they are to have any chance of qualifying whilst Man City also need the three points to give themselves the best chance of qualifying.

MJK46
6 years
So close to winning the group stage, you got this!
Login to Quote

Justice
6 years
Two points guarantees you passage to the next round, hopefully you can get it!
Login to Quote

So so close, its going to be an interesting end to this group stage, that's for sure!

The draw for the Fourth Round of the Coupe de la Ligue has thrown up some potentially very interesting ties. Last year’s winners FC Nantes have been thrown a very trick home tie against AS Monaco, whilst the runners up from 2016-2017, Olympique de Marseille have been given an away trip to Ligue 2 side Evian. Paris Saint-Germain have been given a potentially easy tie against SC Bastia, whilst Alain Casanova’s new look Olympique Lyonnais side will visit EA Guingamp.

Jack
6 years
You should breeze past them buddy

Griffo
6 years
Solid as always MG, keep up the great updates my friend!
Login to Quote

Should do but then again this is FM we're talking about

Haha i'll make sure it is dont worry, we'll have to try our best to "wash" them away

BARCELONA & MARSEILLE SECURE PLACES IN THE KNOCKOUT ROUND 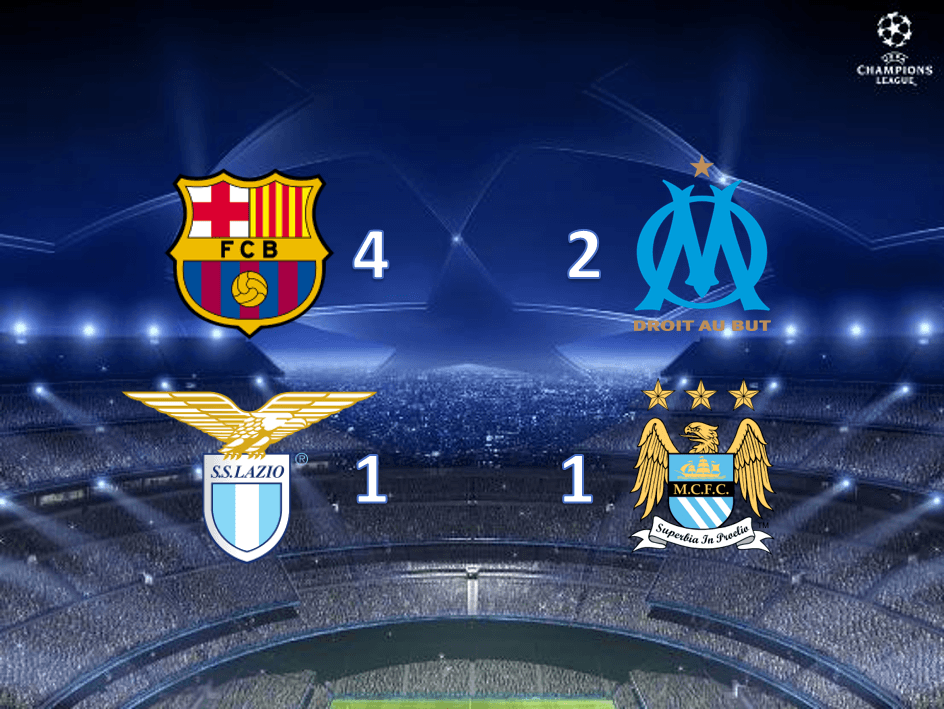 On a fascinating set of fixtures on matchday 5, FC Barcelona and Olympique de Marseille secured their places in the knockout stages of the UEFA Champions League, despite the Catalan giants beating the French side 4-2 at the Camp Nou. Things got off to an excellent start for Barcelona after 3 minutes, when Neymar squared the ball to Daley Blind and the Dutchman lobbed a perfect through ball over the top to Luis Suarez who accelerated through on goal and slotted home to give Barcelona the lead. Their lead was doubled after 24 minutes when Suarez delivered the ball into Daley Blind whose powerful header was spilled by Asier Riesgo, and the Spanish goalkeeper should have done a lot better with the chance. After 39 minutes, Barcelona made it 3-0 when Neymar exchanged some fantastic volleyed passes with Lionel Messi, before smashing the ball past Riesgo to all but secure the three points. Then in the 54th minute, things went from bad to worse for Marseille as Alessandro Florenzi delivered a perfect cross into the box for Luis Suarez to head home and make it 4-0 to Barcelona. However Marseille weren’t going to down without at least some sort of a fight as Jeremy Mathieu made an awful decision in playing the ball back to ter Stegen who failed to clear properly and gifted the ball to Michy Batshuayi who passed the ball into an empty goal. Just two minutes later they pulled another goal back as Mario Lemina slipped in Lucas Ocampos who squared the ball to the on rushing Romain Alessandrini who made it 4-2. This finished the scoring and it was Barcelona who claimed an ounce of dignity back after their 6-0 thumping in the reverse fixture.

Both sides sealed their place in the knockout stages of the UEFA Champions League though after proceedings in the game at the Stadio Olimpico between Lazio and Manchester City. Despite Stefan Radu’s sending off in the 44th minute, Khouma Babacar gave Lazio the lead in the 70th minute with a powerful effort which flew past Joe Hart. A victory for Lazio would have meant that the two teams qualifying from Group E would have been decided on matchday 6, but in the second minute of stoppage time, Vincent Kompany headed home from a de Bruyne corner to level the scores, and send both Barcelona and Marseille into the last 16 of the competition.

Barcelona and Marseille will advance from this group then thanks to Vincent Kompany’s late equaliser in Rome, as the French side sit three points clear of Man City but have the better head to head record. Barcelona are top of the group with 10 points but will surrender top spot in the group if they drop points on matchday 6 and Marseille secure all three in their game. Manchester City at the moment will drop into the Europa League but defeat and a victory for Lazio on matchday 6 will see the Italians qualify.

On matchday 6 then, Olympique de Marseille will hope to finish in 1st place in the group if they manage to beat Lazio at the Stade Velodrome and Barcelona drop points at the Etihad Stadium when they visit Manchester City.