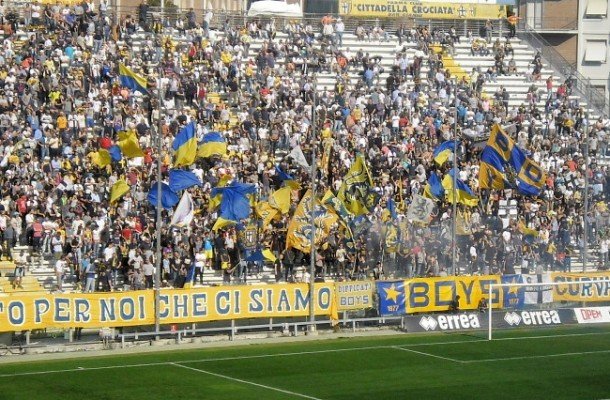 Parma eased into the Final of the Serie D Paule Scudetto with a comfortable 2-1 victory over RapalloBogliasco in Carrarese. The performance from Paolo Vanoli’s side was very commendable, and it was new signing Simone Corazza who scored both goals to take his tally to 8 goals in 14 games for his new side.

It took just seven minutes for the forward, signed from Novara to give Parma the lead as Francesco Corapi, the star of Parma’s second half of the season, swept a delightful ball into the penalty area with Corazza taking a touch before curling a very good effort past the goalkeeper to give Parma the lead. Paolo Vanoli’s side continued to push forward in search of a second goal that would give them one foot in the final, before in the 44th minute another brilliant cross from Francesco Corapi would set up Parma’s second. Corazza, in fine form, rose to meet the ball and glance his header into the bottom corner of the goal to put Parma 2-0 in front.

However RapalloBogliasco did manage to pull one back in the 70th minute as Giuseppe Constantino headed home at the back post, after Antonito Bonvissuto had headed the ball back across the face of goal. Constantino made no errors as the ball hit the back of the net, to set up a nervy final twenty minutes, but Parma managed to hold on and secure their place in the Final of the Paule Scudetto.

Parma earned their right to be called Serie D Champions after a brilliant comeback against Olginatese, after being 1-0 down at half time. The Girone D Champions took the lead after only 12 minutes as Beccali found Greco who in turn found Luca Merlo who cut inside the penalty area and fired a powerful effort past Zommers in the Parma goal to give Olginatese the lead.

However Parma were clearly the better team and were playing like Champions, continually pressing the ball and not allowing Olginatese to have any time on the ball. Their rewards for their style of play came in the second half though as eventually Olginatese’s defence relented as Yves Baraye slipped the ball into Simone Edera who first time played the ball into the path of Daniele Melandri who smashed home the equaliser with the inside of his left boot.

Then just four minutes later, Parma completed the turnaround as Edera found the on loan Agrifogli who swung the ball into the penalty area to find Francesco Luoni who tapped in at the back post to give Parma the lead and put Paolo Vanoli’s side truly in the ascendancy. Parma continued to search for a third but were unable to find it until in the 83rd minute, Davide Mondonico fouled Daniele Melandri in the penalty area, with Simone Edera stepping up to the plate to convert the spot kick and send the Parma fans wild as they won the crown that now sees them titled the 2015/2016 Serie D Champions. 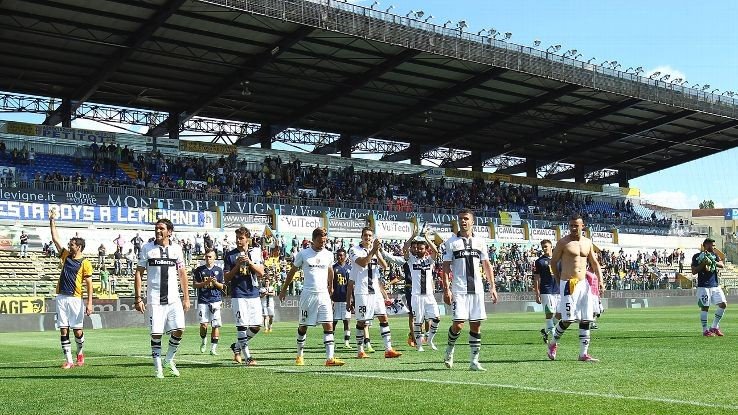 After their win in the Paule Scudetto Final against Olginatese, Parma officials and players were present at the clubs official awards ceremony last night, held in the club’s city centre. For the first time in a few years it was a night to celebrate for the club as the team celebrated its promotion from Serie D into the Lega Pro amidst some positive financial rebuilding behind the scenes. Manager Paolo Vanoli guided the team to 1st in Girone D accumulating 79 points over the teams 38 matches, in which the team won 23 of said games. Below is the list of the clubs award winners:


The award for the clubs top goalscorer goes to Matteo Guazzo, who despite missing a couple of large chunks of action, the striker managed to bag 12 goals over the course of the season, helping the club to promotion from Serie D.
This season the golden boot award goes to Francesco Luoni, who contributed to 11 goals this season from a right wing back/full back position, an especially commendable achievement for the defender considering he only joined from Varese in the summer.
There is only one winner for the golden glove this season with Kristaps Zommers receiving the award, by keeping 20 clean sheets across all competitions as Parma were very solid defensively with Zommers a key figure in Parma’s defensive success.
The award for signing of the season goes to a player who has already won an award this season, with Francesco Luoni being nominated the team’s signing of the season, having assisted 11 goals and scoring 5 goals in all competitions.
The club’s goal of the season this year goes to Yves Baraye for this stunning strike against Romagna Centro, with the goal coming right at the death as Parma secured their place in the Lega Pro with a late comeback.


The clubs young player of the season this year goes to Alessio Innocenti. The midfielder signed on a free transfer last summer after being released by AC Milan and came straight into the clubs midfield and established himself as a key figure in the team that took Parma to the third tier of Italian football.
With a staggering 38% of the vote, Francesco Corapi was named Player of the Season after scoring 11 goals and assisting 8, despite only being a first team regular in the second half of the season. 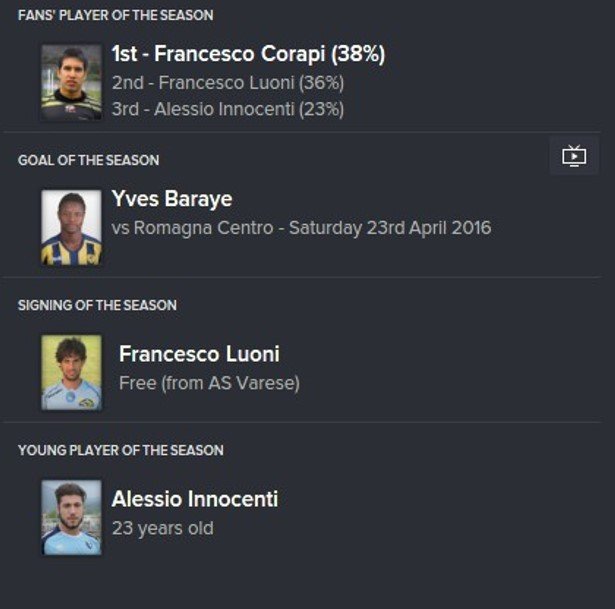 Lega Pro we are coming for you!

nobody needs the UEFA Cup

haha thanks mate, big summer ahead of us!
Login to Quote

Absolutely massive summer ahead, Yoan Severin and Mattia Minesso will not be the only arrivals that is for sure!
Login to Quote 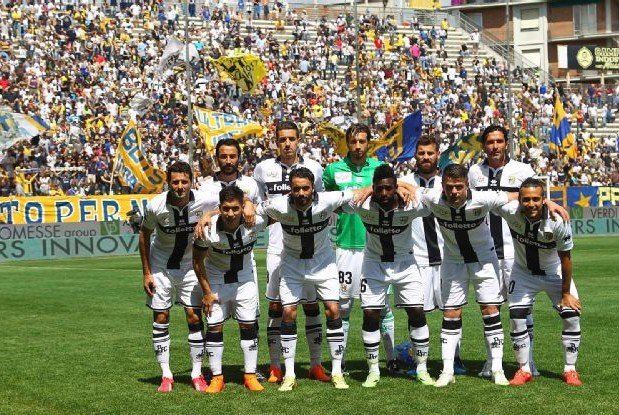 Parma line up ahead of their final home game of the season against Romagna Centro.
________________________________________
- Club returns to professional status for first time after being declared bankrupt
- Team was promoted to Lega Pro after winning the Serie D Scudetto last season
- Alessandro Lucarelli becomes first player to extend contract

Parma Calcio have today been confirmed as a professional club once again, after they were rebranded as a result of their bankruptcy in 2015. The move to make Parma a professional club again comes as a result of the clubs promotion from Serie D Girone D, which they won, with Paolo Vanoli’s men now set to try and conquer the Lega Pro in the upcoming 2015/2016 season. The move to make Parma professional again is also set to boost the clubs playing squad, as it means players can now be offered professional, full time contracts, meaning that for many of the players who were out of contract this summer, new deals can now be offered to keep them at the club. Alessandro Lucarelli, the legendary club captain is one of these players and a new deal for the defender is expected to be confirmed in the coming days.

After news broke of the move, Nevio Scala, the Parma chairman, said he was delighted to have helped his former club to become a professional team once again. ”The first time I was here, we had some really good memories, and now we’ve turned professional again, hopefully it is a sign that we are well on the way to becoming a major player in Italy once again and we can get the good times rolling again in the near future. Paolo Vanoli is doing some really good work at the club at the minute and hopefully now that the club’s financial situation is starting to become solid again, Paolo can lead this team to much more glory in the near future.”

With the increase to the club’s finances after the transition to Professional status, Parma fans also have double reason to celebrate as iconic club captain Alessandro Lucarelli signed a new one year extension to his contract. The extension means that the Parma captain who has been at the club since 2008 and was the only member of the team to stay with the club after they were declared bankrupt, will be able to help the club through its first season back in professional football. ”This is a great moment for me. I never wanted to leave the team and now the club’s transition to becoming a professional club means that I’ve been able to extend my stay. I know my football might be limited next year but I will continue to give my absolute all to help this team in Lega Pro next year.”

MJK46
5 years
Just caught up. Congrats on it all
Login to Quote

Thanks mate, onwards and upwards from here!

Yeah massive step forward, should be able to bring a whole different class of player!
Login to Quote 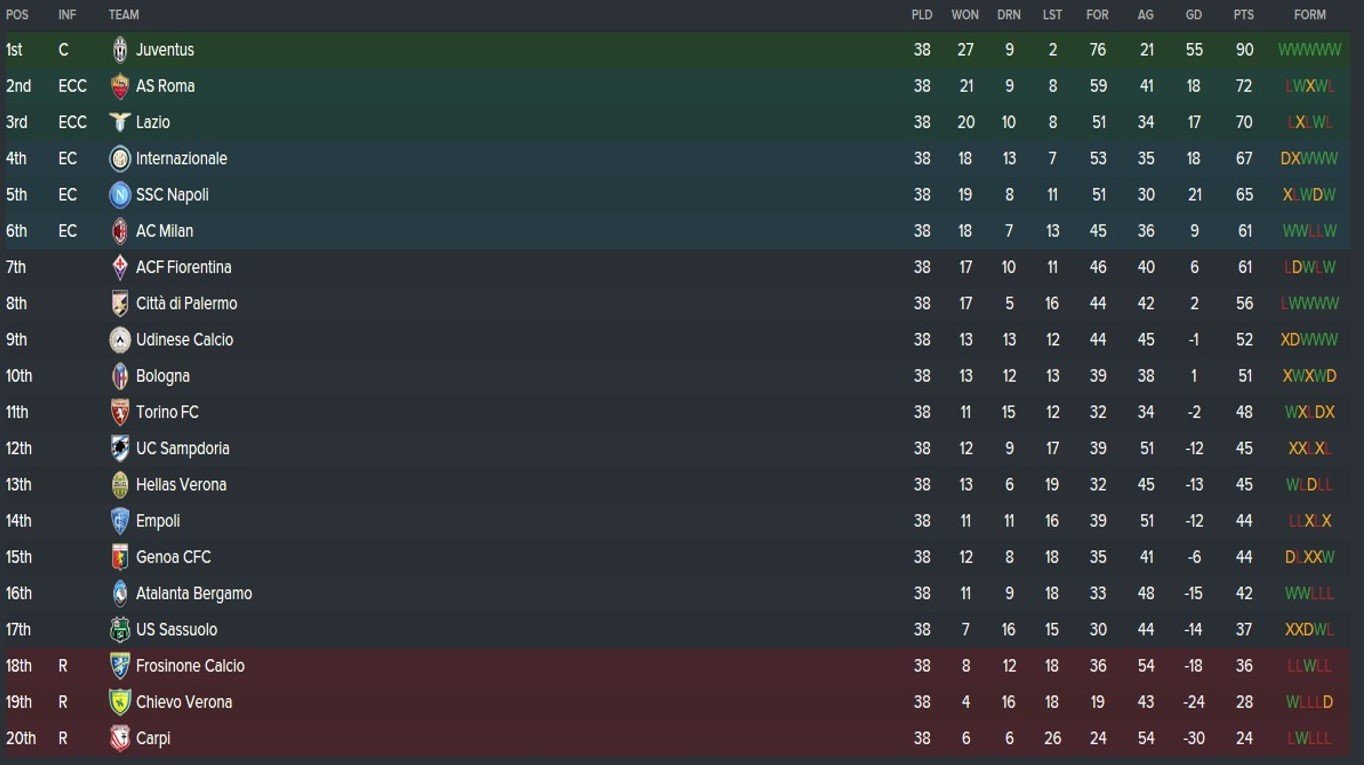 In the top flight of Italian football, Juventus once again won the Scudetto finishing 18 points clear of Roma who finished in second place for the third successive season. Lazio were the final entrants into the UEFA Champions League. Meanwhile for Internazionale, Napoli and AC Milan, the UEFA Europa League was their reward for finishing 4th, 5th and 6th marking serious improvement for the two Milanese clubs after a couple of years struggling in mid table in Serie A.

At the bottom it was heartbreak for Frosinone, Chievo and Carpi who all suffered the drop with Serie B where their futures will lie when the new season kicks off in August. 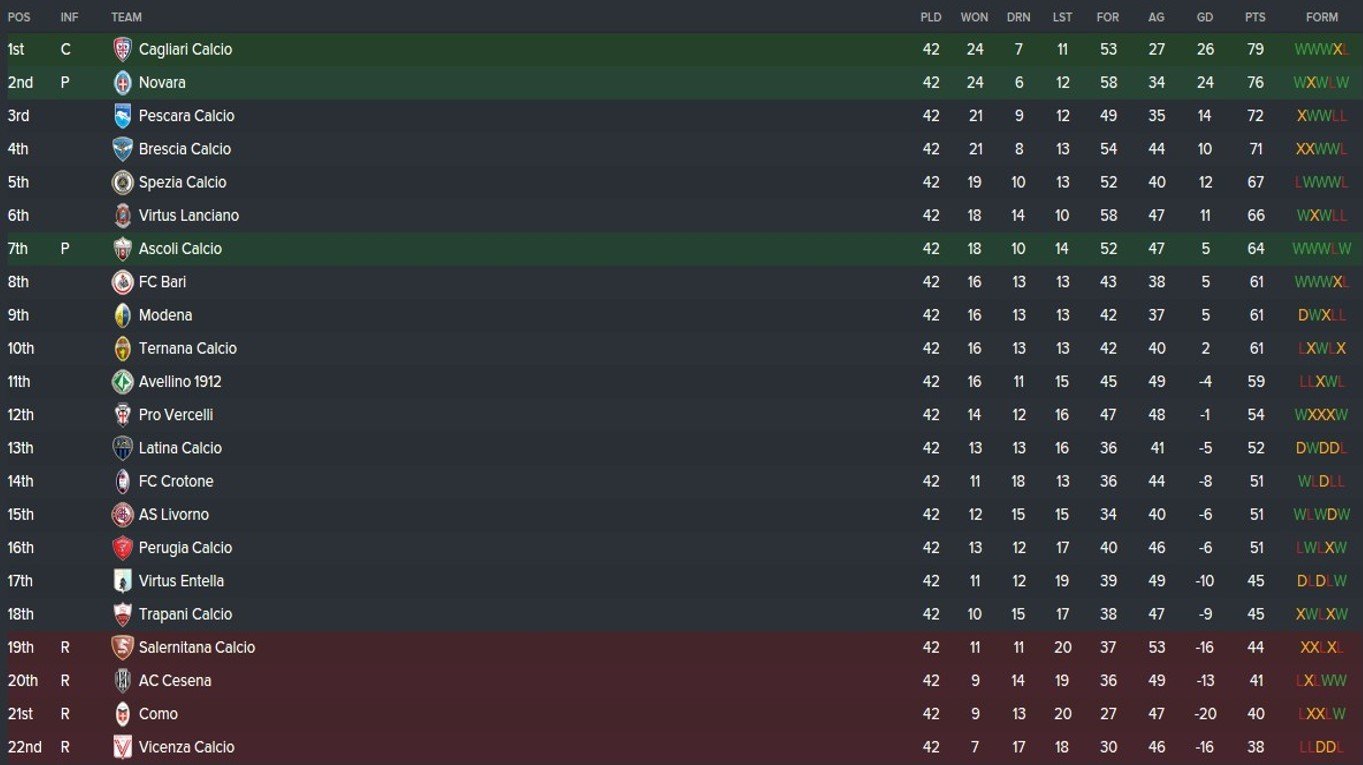 In the second tier of Italian football, it was joy for Cagliari, Novara and Ascoli as they secured their places in next season’s Serie A TIM after a long hard fought season saw them finish 1st, 2nd and surprisingly 7th.

Meanwhile at the bottom of the table, Salernitana, Cesena, Como and Vicenza were the four teams to drop down to the third tier of Italian football. The four relegated teams will now be separated into the regional levels of Lega Pro ahead of the 2016/2017 season.

Meanwhile in the third tier of Italian football, Mantova, SPAL, Casertana and Lecce were the four teams who secured their return to the second flight of Italian football, with Lecce coming through the divisions playoff system to take their place in the 2016/2017 Serie B.

It was Juventus who completed a domestic double, by beating Internazionale 4-0 in a completely one sided final, with Paolo Dybala continuing his impressive season with two goals in the final.

For Juventus, it has been a season to remember as they were crowned the Champions of Europe after overcoming Bayern Munich in the Final in Milan, making up for their defeat to Barcelona in last season’s final.

Meanwhile in Europe’s other showpiece event, it was Liverpool who took home the trophy for the fourth time in their history, with Roberto Firmino scoring the goal in the 111th minute that broke Spurs hearts and handed Liverpool silverware under Jurgen Klopp.

Hoosier
5 years
Just caught up. What a read! Congrats on the promotion!
Login to Quote

BeanyUnited
5 years
Huge congrats on the promotion pal!! Huge summer ahead now, hopefully you are able to keep all your players at the club and invest in a few new ones