Thanks mate, very good club indeed! I hope so mate!

Justice
6 years
It'll be important for Vanoli to hit the ground running.... I wish him the best of luck in his new role

Balik
6 years
Nice to see Vanoil back but in the managerial role, hopefully he re-spark their fire!
Login to Quote

Yeah i think you're right, big season ahead and the first few games will be crucial!

Hopefully better things are to come for this club!
Login to Quote

Parma have today completed the signing of a duo of South American prospects, with both players joining, after being rejected by the two Milanese giants. Alessio Innocenti, whose deal was believed to have been signed two weeks ago before the necessary paperwork was delayed, spent 10 years as a youth team player at AC Milan, before being released in 2014 after a season spent on loan in the third tier of Italian football. Meanwhile his fellow new signing, Rodrigo Alborno, joins on a season long loan from Internazionale having spent part of last season in Roberto Mancini’s first team squad without making a single appearance. It goes without saying that for both players, the move to fourth tier Parma represents a big shot at their careers kick starting, with manager Paolo Vanoli hoping the pair become key figures in Parma’s push to rise up the league system. 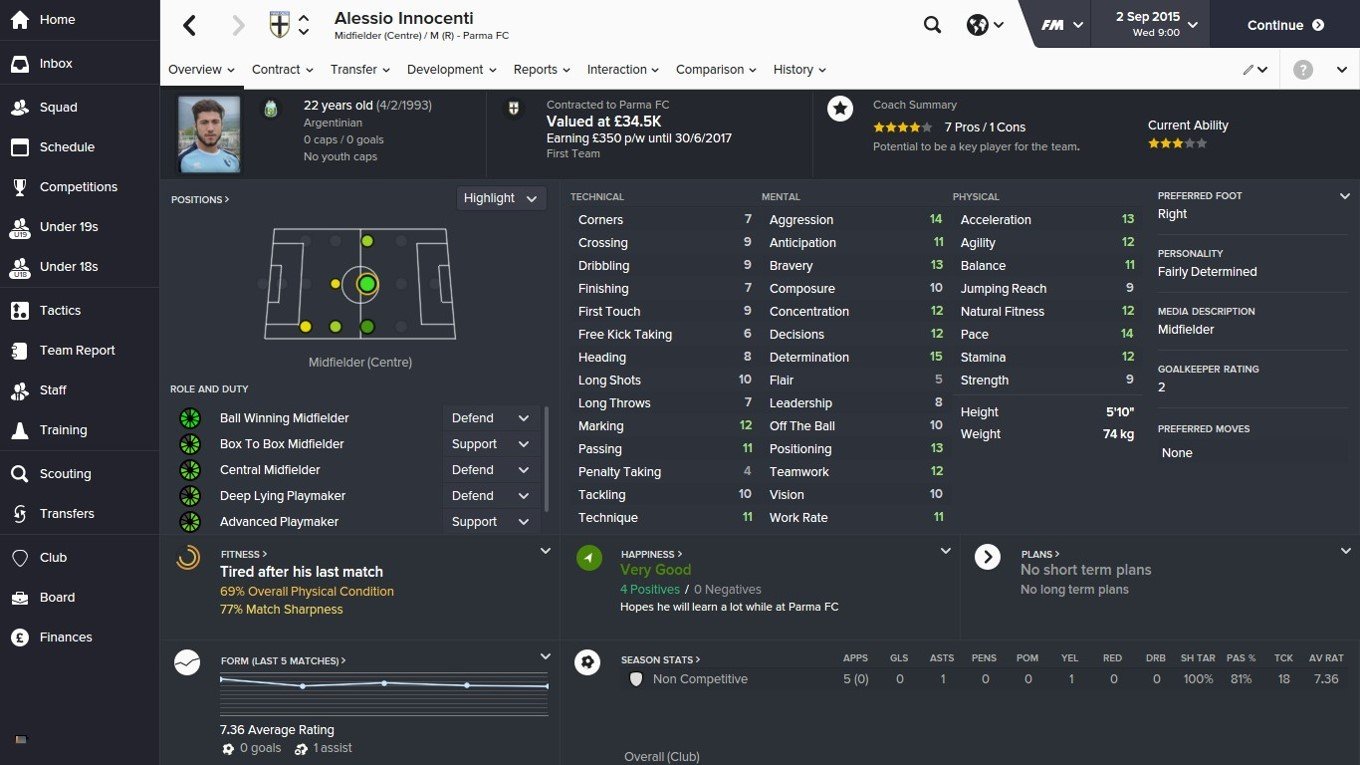 When asked to comment on the acquisition of the Argentine playmaker Innocenti, Vanoli was delighted. He has all the attributes to be a top player at this level and I firmly believe he can be a key figure in this club’s hunt for promotion to the Lega Pro. He is undoubtedly talented and his determination to succeed is exactly what we need at this club, especially with the situation we find ourselves in.”

The player himself was also extremely happy at his arrival at Ennio Tardini. ”This is a huge transfer for me. To play for such a big club in Italy is an amazing opportunity and to be a part of the next chapter in this club’s history is one I will not pass up on. Forza Parma!” 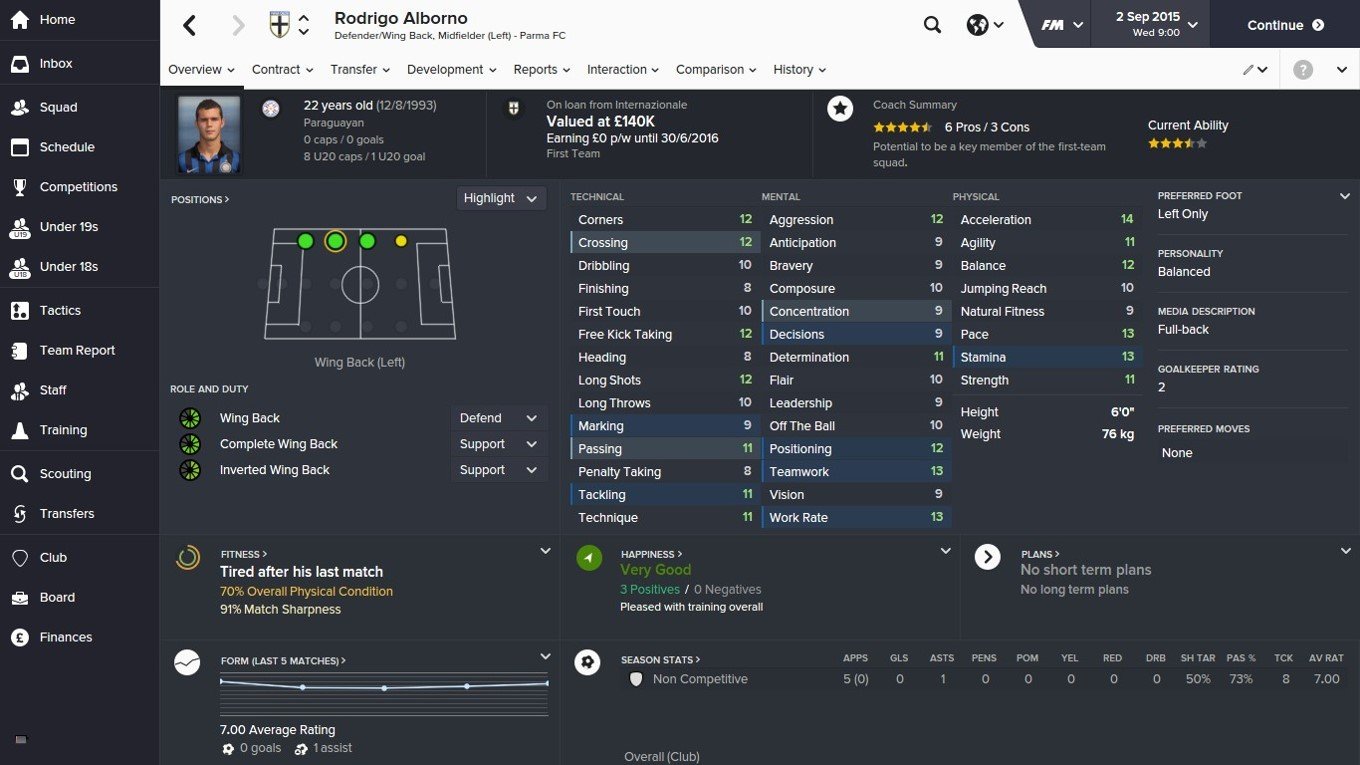 Meanwhile Alborno, who played for Libertad in Paraguay before joining Internazionale, and then spending loan spells at Cittadella and Novara, was warmly welcomed by Vanoli. ”He is a very talented player that perhaps hasn’t had the break he deserves at Inter Milan just yet but he has got experience in the first team at Novara and at Libertad and that will serve us a lot of good. He could be a very good player for us and I am sure he will live up to that billing. We needed someone in that left wing back position and he is the perfect fit. Hopefully he can stay at this club for a long time to come.”

The player was also delighted at the apparent opportunity to grab more first team football and left the door open to a permanent move to Parma by stating ”This is a magnificent club with a poor situation it finds itself in. But the set up here is good and I really hope I can be a big part of this team and can help it achieve something this season and hopefully for future seasons if it is the right fit for both me and the club.”

Thanks, I hope so, they've both had good starts so far!

Thanks mate, only time will tell if they live up to potential!
Login to Quote

Justice
6 years
Two solid signings for your club, they'll add a lot of quality to your side!
Login to Quote

Thanks mate, hoping they can go on to have successful careers here!
Login to Quote

Griffo
6 years
God I miss LLM, I really hope you enjoy this save!
Login to Quote

Balik
6 years
Great signings for your squad! Hopefully they can make a difference
Login to Quote

Haha I am starting to really enjoy it mate, can't wait to get into the higher divisions though!

Yeah i hope so mate!
Login to Quote 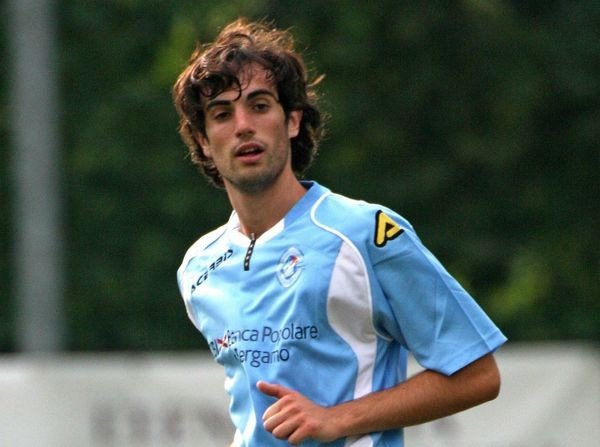 Parma manager Paolo Vanoli has today announced AS Varese full back Francesco Luoni as his third signing of the summer transfer window on a free transfer. The defender who can play at right back or at right wing back as well as being more than capable of filling in at centre back if needed to, was reportedly a big transfer target for Vanoli as he looked to find the right recruits for the systems he intends to use for Parma’s revival. Luoni is expected to fit right into Vanoli’s team ahead of Saturday’s friendly meeting with GD Chaves in Portugal, with the player keen to impose himself as first choice as the upcoming Serie D season approaches. 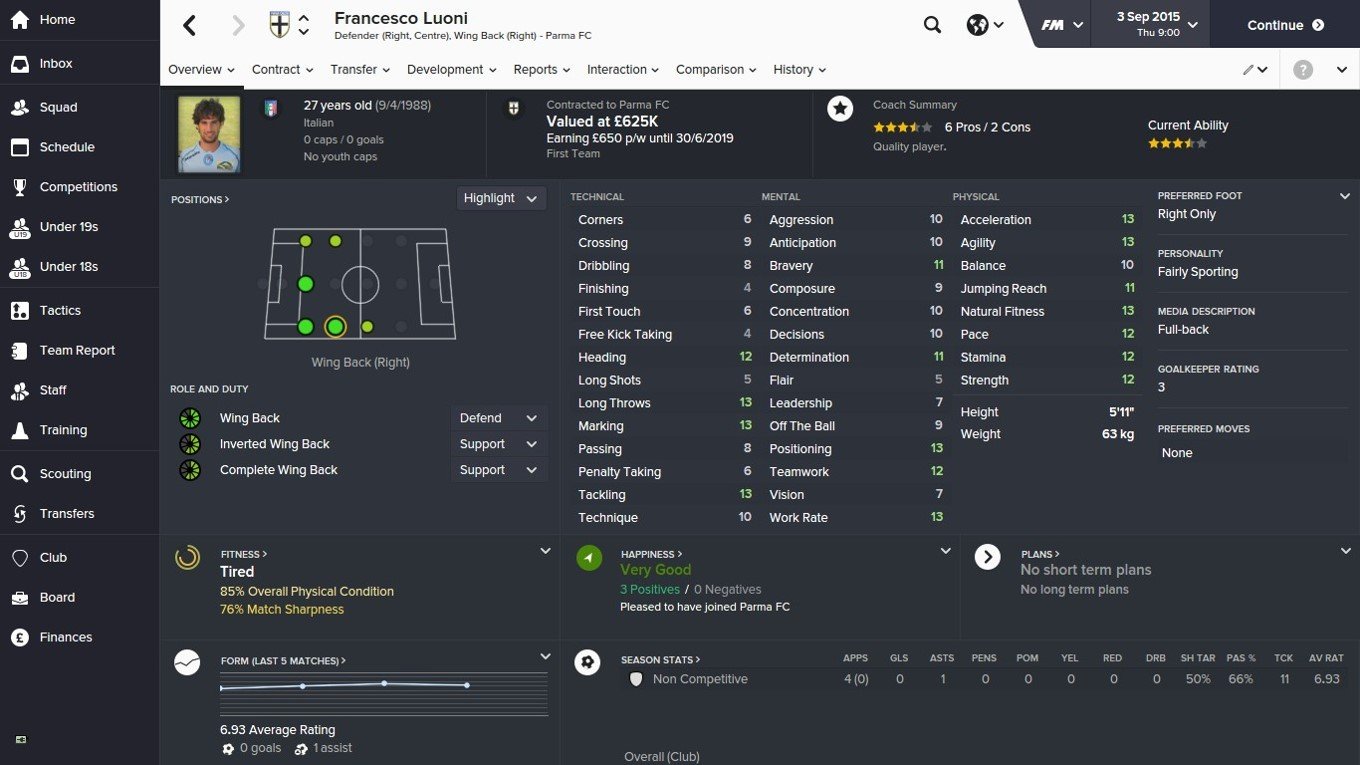 At his unveiling, Vanoli was all smiles as he said ”We’ve signed a very good right full back that can push further forward extremely well if we need him to and I have every belief that he is going to fit right in with this squad. He has the right personality and the right work rate to become a crucial player for this team as we approach what I am sure is going to be a very long season. If he can hit the ground running he is going to have a very good season for us and hopefully we’ll have one too.”

The player himself was extremely happy, despite the fact that he had dropped down a division, and although he wasn’t at the unveiling due to sickness, he did take to twitter to claim: ”I am delighted to be at Parma. It is a very big club that has unfortunately gone through some hard times but here we go!”

MJK46
6 years
Looks like a star player
Login to Quote