MJK46
2 years
Dude that is some sad stuff from the mothers point of view. Hopefully they find the killer though.
Login to Quote

Jack
2 years
Interesting to see you come at the events from a new perspective. Like it Scott

ScottT
2 years
Redvee- Thanks mate, your writing will improve over time I'm sure!

MJK- I'm sure they will. There was a knock at the door with police sirens flashing violently outside, I wiped the tears from my eyes and Tina sat up with her cup of tea in her hand. I opened the door slightly, trying to cover myself from the outside as I only had a dressing gown on. "May I come in please, Mrs?" The officer asked, in a assertive tone. "Can you just give me two seconds to just put something else on?" I quizzed, he allowed me and after I threw on a pair of pyjamas instead I indicted he could enter.

"Can I get you anything?" I asked, knowing that this may have something to do with Megan and I was in for a long chat potentially. "No thank you," he said shaking his head. "I have some news on your daughter, Megan and the case... well we believe that you may be very interested in this." I looked at him, not taking my eyes off him as I went to sit down next to Tina. "Do you want me to go upstairs, you know out the way?" Tina asked.

"It's fine Tina, I may need you.." I said with a little bit of panic in my voice.

"We had evidence to suggest this was a suicide, as you know due to the note left and the way the body was. However, there was the slight possibility this was a scene of murder," the officer said looking directly into my eyes. "After thorough checks we do believe this was the result of a murder by the use of a knife, I'm very sorry." I looked at Tina before burying my head into her shoulder and crying, why would someone want to kill my daughter? "Do you know who this person is?" Tina asked for me, "Have you got any way of... finding out?"

"We will conduct searches and carry out multiple tests to ensure we get the sufficient clues to find who the cultript was. In situations like this it can be very difficult, I won't lie to you, however we will come to the bottom of it."

"I hope you do! Who could do something like this to my Megan?" I sobbed, "My daughter was killed by god knows who and I won't sleep until you lock up the criminal and throw away the key. I hope they ROT!"

"We will try our hardest Mrs. I'll leave you to yourself and will make sure to tell you of any news we find."

"Thank you officer," Tina said showing him out as I lay heartbroken on the sofa. I couldn't believe what I had heard at all, I had convinced myself it must have been suicide because of that note and the evidence to suggest it could have been murderer was just some kind of mistake. But now... but now knowing someone killed my daughter... it's something else. It haunts me how someone could kill a girl so precious and beautiful as she were, what had she done to deserve this torture?

"How could you be so stupid as to make it so obvious, huh?"

"I tried! I thought I had covered it up-"

"Well obviously not good enough, they're going to find out we killed Megan, besides her mother will point the finger at me anyway!"

"Spare it, you're not sorry at all otherwise you would have covered it up better and not been so foolish as to give them the evidence they need. Let's just hope you did enough, eh."

I can't believe Scarlett was so stupid to not cover her tracks because obviously with me being her ex the blame is going to come straight to me isn't it. I wanted to get rid of her because she was a waste of space and I knew she wasn't going to let me go for leaving her. Truth is, I never wanted her – who would want a girl who was like Megan? A girl who cared more about helping the fucking enviroment then seeing her own boyfriend.

Scarlett is something different, she obeys me and puts me first. She was also the person who stabbed Megan O'Brien in the woods that night, nobody would have guessed that because she's covering my tracks, if I get found it... well I won't because she'll be taking the blame.
Login to Quote

MJK46
2 years
Damn that is all I have to say. Had a feeling it was murder from the ex and co.
Login to Quote

Jack
2 years
I must say I'm surprised that the police didn't pick up the case as a murder straight after seeing stab wound. How very dark

Jack- Me too, there's other things to take into account... more will be revealed soon.
Login to Quote 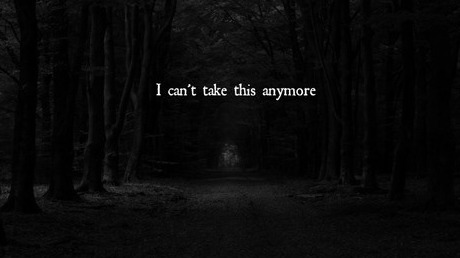 I made a huge mistake doing this. Why had I let him pressure me into doing this for him, he made out that she was a threat to our relationship... that she'd come back and take him again, but she wouldn't would she? How could I be so stupid as to think that and now the blood was on my hands, if he got found out obviously the plan was to pass the blame onto me. He doesn't actually love me... he just used me to carry out this. It all makes sense now.

I remember how it all went that night, he told me he saw Megan with Crystal that night and that now could be the perfect time to 'strike,' the way he says strike as if I'm some sort of snake waiting for it's prey... it sickens me now. Regardless, he basically intoxicated me with drink to make my head a mess and now, a few weeks later and with a decent head on my shoulders again I feel so broken and thick. I understand people make mistakes, but killing someone is not a mistake, it's an act that cannot be forgiven and I can't do this.

As I was saying, he filled me up with drink to make me not fully think through what he was doing to me. When you are in a relationship you have full faith in your other half and that's exactly the thing he put in my head, twisting his words to make them sound beneficial in my head. I'm not sure what he did to make Megan go back outside, I thought I blew my chance by not killing her and even Crystal there and then like he wanted, unless she just happened to unfortunately go back outside. But she did and he made sure I delivered.

My phone kept going off, the vibrations in my back pocket as I had to silence my phone. I took one look as I tried to keep a tab on Megan, the message was from him and it said, "Don't let me down, she will ruin this relationship if she can. Make sure you don't let her." The fact I was stupid enough to listen to this and even delete the messages... luckily I think in a scene like this they can still locate messages so when I confess because I can't keep lying like this, he gets dragged down too.

I saw my opportunity when she went into the wood, obviously it was dark and hard to see much so she wouldn't be able to see my face within the darkness. I could just about make her out, she was absolutely beautiful and seeing her scream as I plunged the knife deep inside her, well that image will live with me forever. I couldn't leave her straight away, I stood over her trying to 1) cover my tracks and 2) make sure she went as comfortably as possible. This girl didn't deserve to go and the girl that committed the murder isn't the same one writing this now.

All I can do right now is continue as normal and then, when he's not home escape to the police and tell them the whole story. I know I'm going down for a long time, but I know he will be too and if that means I have to go for longer then I will. He was the real culprit of the crime and I just hope the police see that like I do. I scroll down Megan's social media everyday, looking at the messages she has got from the many friends she had. To see how many people have been affected by her death has shaken me.

I've made two huge mistakes in my life that I can never forgive myself for. The first being cheating with Kyle and the second being the murder of her. Perhaps it's an idea to bring this whole extract with me for the police to read, I've talked about it in so much detail they have the whole story down on paper. I sometimes see her family, not her parents as they seem to be elsewhere... but I see Crystal and her nan in town a lot. They don't know me I don't think, but I try to put my head down anyway because I can't look at them without the guilt that surrounds me.

Megan went far too soon and if I could turn back time and run as far away from Kyle as I could, I really would. I dread to think what else he could do if he gets away with this and if he didn't cheat on her with me... what he could have drove Megan to. The happy ending to this story is that he'll get what's coming to him and so will I. But for the family of Megan, they won't get the ending they deserve, the ending where Megan returns home and all is normal...
Login to Quote

Jack
2 years
After getting all the confusion out of the way about who's speaking, really good update mate

MJK- Laughed more than I should at that, Bertha... what a name hahaa

Infra- Thanks!
Login to Quote Jack
2 years
Eek! Some shaky form there, I must say! Nice to see you get a bit of an easy ride in the FA Cup, though.
Login to Quote