Justice
3 years
You've certainly strengthened your squad with some exciting prospects. Certainly the next big step would be to keep finding ways to improve the squad, and the club. Any concern about PSG fishing up all the local talent, or have you alternative solutions to this?
Login to Quote

MJK46
3 years
Jack If he keeps up the good work I will try to get him on a permanent if not I will go with another loan for him.

Justice The way PSG is going in my save is buying expensive and flashy foreigners while neglecting the local quality talent. So I will try to get those guys on my squad. One goal is to have 75 percent of the squad French.
Login to Quote It was not all sunshine and rainbows in September as Paris FC struggled all month long. In five league matches they were able to only score two goals while only winning one match. Other results include a draw and three losses. As September ends Paris FC are in 14th place with eight points. Paris would start off the month on a bad foot as fellow promoted club Dunkerque thrashed the club by a score of 2-0. Not much is to report here as it was a very lackluster match stat wise. Matchday four was one that you could call a victory for the club. Despite scoring no goals our defense pulled off a major fight against Valenciennes who were the big favorites. Paul Charruau made several key saves to persevere a 0-0 draw. 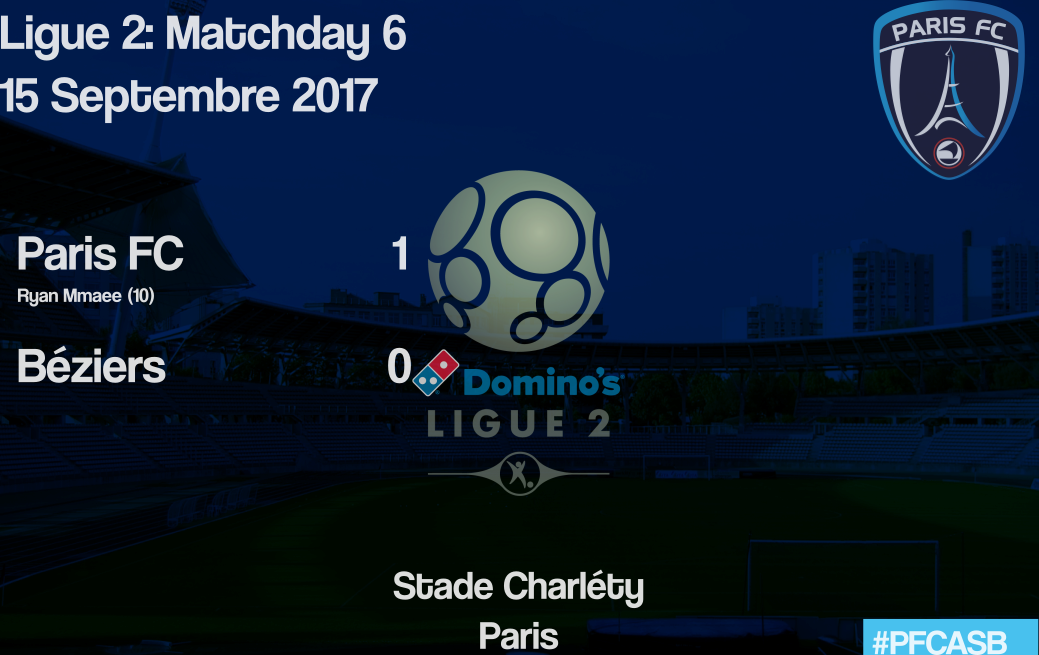 It took matchday six for us to score once again. In a very rare victory Paris looked sharp and were firing on all cylinders. The only goal came in the 10th minute as Ryan Mmaee scored after a nutmeg on the Béziers defense. At this point Paris FC are 0-1-1 against the two fellow promoted teams of last years Championnat National. A trip to Lens was on the card for matchday seven. This was the second loss of the month as we could not hit a shot on target. The one bright spot was that goalkeeper Siaka Koné made his PFC debut. Despite allowing a goal early on he would fight on and made sure no other goals would get past him. September ended as FC Metz came to town. Here Paris would struggle against the third place team as the final score was 4-1 for the visitors. Ryan Mmaee scored our only goal of the match with a strong header in the 16th minute. It is obvious that Ryan Mmaee is the reason we are not dead last. His play has been crucial early on with his play making ability and scoring. With five starts the 20 year old Belgian score our only 2 goals of the month. He also collected 1 Player of the Match award and completed a 6.90 match rating for the month of September.

"I really do not know what is going on here this month. We might not be the best team and that we shouldn't be here but I am happy for their fight most of the time. Hopefully in October we can change things around especially against Red Star." October will be a huge month against some very good squads in Le Havre and Bourg-en-Bresse. Paris FC will have its chance of revenge against Strasbourg on the final matchday of the month. Finally to kickoff October we will be traveling a few miles to face rival Red Star for the first time since the 2015/16 season. Red Star are currently dead last with 2 points.

ScottT
3 years
An absolutely horrible month for you but you'll just have to get the points you can and ensure you stay tight at the back if you struggle getting the goals. I'm confident you'll avoid the drop anyway.
Login to Quote

redvee35
3 years
I hope you can turn things round. Great story and loving the new look
Login to Quote

Jack
3 years
Jeez, not the month that you're looking for! Could be a scrap to stave off relegation, but I have confidence that you'll easily stay afloat. It is early on in the season, there is lots of time to get onto some form of sorts!

Justice
3 years
Ouch, seemed goals were hard to come by this month. If you can start finding the back of the net more regularly, the results will certainly follow.
Login to Quote

Thanks. it was a struggle but I feel that October might be an improvement
Login to Quote


It is finally the week we have been anticipating since returning to Ligue 2. It is derby week against Red Star 92. As lame as it is there is no name for the derby just Paris FC v Red Star 92. I am looking to change that but at the same time find a way to dominate them.

Despite a really shitty September the guys are up for this victory and have and will be training extra hard for the game. Talking with Vincent Demarconnay he tells me the importance of the clash as he has been here for it several years. One thing he told me is the the fans are expecting a victory and that if we lose it wont be good.

I have a feeling this match will also be the turn around we need. The guys are itching for a victory after losing two straight. The good thing is that despite the rough month we are still seen as the better team. They are dead last with two points and a -4 goal difference to us. I am not going to mess things up and say we will win but I know we will be the better team.

There is one thing I am not happy about is the timing of some international games that week. I was planning on starting Siaka Koné but he is away with the Ivory Coast U20's. The reason for starting him over Paul is I want to see if that has any effect on the club. He had a great first showing so I want to continue getting him work and as Red Star is dead last it would have been the perfect start. Even worse Demba Camara was called up too so we have to play without him. That could be a massive blow.

This is going to be a very light week of training as I need everyone to be at their best so it will mostly be light sprints, a few drills, teamwork activities and light weight room sessions. I have to tread carefully as not to get everyone too stressed or panicked before the match Saturday.
Login to Quote

ScottT
3 years
Gutting to hear that a few of the lads will miss the derby, but I'm confident you'll beat a poor Red Star Paris side.
Login to Quote

This is it. The first match between the two Paris clubs in Ligue 2 for the first time since the 2015/26 season. Each side is looking to see who the king of the city is and will be one to watch for. It is a tale of two forms as Paris FC are doing better than expected sitting in 14th, while the host are dead last with only two points.

Kévin Gauthier said he didn't see Red Star was a threat since the two haven't played in over a year and that he feels his team is superior in every way. But the PFC manager is still going to be cautious on gameday. Win the derby and Paris FC continue their overachieving start while Red Star gets closer to relegation to the Championnat National. There was no comment from ed Star manager Manuel Pirès other than they are ready and focused for the game.

This will be an important match for Gauthier as it is an audition for the open Marseille job. Their board has commented that they are Keen on signing him and want to see how he handles Red Star first. Gauthier was quoted in saying "It is an honour to be mentioned for the job but I am currently focusing on Paris."

Red Star will be without several players who are out with injuries, suspensions and international duty. Notable names include Ronald Zubar, Florian Makhedjouf, Abdoulaye Sané and three others. The two suspended players are Grégoire Lefebvre and Christopher Routis while Geoffrey Lembet and Barnabás Bese are on international duty.

Paris FC on the other hand only have four players missing. Jonathan Nanizayamo is the only injury while Demba Camara, Gedson Fernandes and Siaka Koné are away on international duty. It will be interesting to see how Paris comes out tactically with both Camara and Nanizaymo missing. Both players play a key role offensively.

ScottT
3 years
Good luck in the derby, Red Star are most likely going down so I would expect three points!
Login to Quote

redvee35
3 years
Derby time. Hope you win and get closer to your dreams
Login to Quote

MJK46
3 years
ScottT: It would be bad if we lost haha

redvee35 Thanks
Login to Quote