ScottT
1 year
A much better month there. The only loss coming to a recently relegated side who will be desperate to regain their Serie A status, especially after the horror show last season. A real boost that the injury list is set to be reduced in the coming weeks too.
Login to Quote

The opening fixture of November was an incredible performance from Brescia, managing to have a 5-1 lead heading into the half with Ernesto Torregrossa managing a hattrick within 32 minutes despite needing painkilling injections to solve a rib issue prior to the game.

The Rondinelle then defeated Padova and Crotone to complete a perfect month in November. 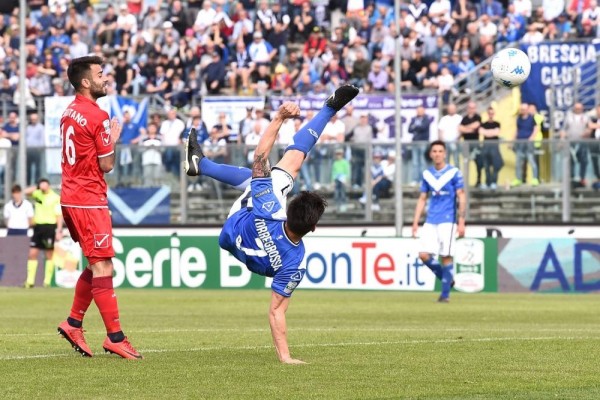 Scoring five goals in three games, Torregrossa was the clear winner of the player of the month award for November.

Stepping up after his strike partner Alfredo Donnarumma has been away for a majority of the season with injury, the 26-year-old has now taken his season tally to eight goals from fourteen matches. 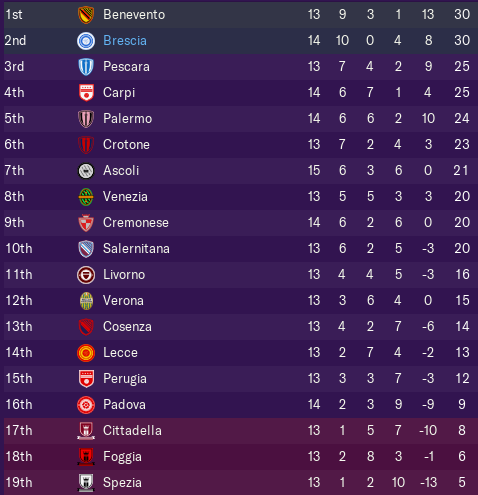 Benevento and Brescia have found themselves slightly clear of their competitors in the Serie B table with a five-point gap from third place.

Below them, many contenders find themselves in a position to make a move up the table should they manage to put together a string of victories.


After returning from injury, bad luck struck again for Donnarumma, straining his calf while training. He is expected to be out for a further two to three weeks.

A packed schedule awaits Brescia during December, starting with the Italian Cup fixture against Serie B rival Pescara.

The Rondinelle then take on a series of five opponents who are all placed twelfth and above it what could prove a critical month for their promotion hopes.

Jack: It is quite a concerning pattern haha

ScottT: Looking forward to the return of Alfredo Donnarumma, it should see our performances go to another level

mgriffin2012: Really happy with our start, hopefully we can maintain it as the season progresses
Login to Quote

ScottT
1 year
A great set of results once again. Shame you're not having the luck you are on the pitch with injuries to Donnarumma.
1
Login to Quote

Justice
1 year
Well in the title race, you can do it Lil' Griff!
1
Login to Quote 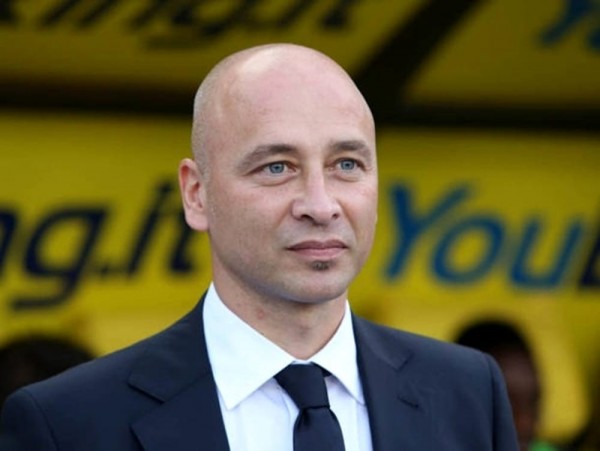 Eugenio Corini has signed a new contract with Brescia, the extension will see him at the club until 2020. Corini will earn €5,750 per week for the duration of his contract. The Italian began managing Brescia at the start of this season after previously being in charge of Novara.

“Eugenio extending his contract is great news for the fans, the players and the club itself.” said Brescia Chairman Massimo Cellino. “His involvement with this club has seen a transformation both on and off the field.” he added.

“I am thrilled to be able to extend my contract with the club.” said Corini. “Hopefully we can maintain our current level of performance on the field and push for promotion to Serie A.” he added.

Brescia have impressed this season, currently sitting 2nd after 14 games. They will be looking to progress further in the Italian Cup in their fixture where they will face Pescara in the fourth qualifying round.

ScottT: Just really want to see him play one game at this point haha I hope it is not a trend that continues as he is a very good player

Justice: I'm trying, just for you specifically
Login to Quote

ScottT
1 year
An unsurprising contract extension given the fantastic start he has had with the club.
1
Login to Quote

Jack
1 year
Very much deserved new contract mate, need to build that bridge between 2nd place and 3rd place now, which I feel can be done with a victory against Pescara in the coming month. Good luck

Brescia Progress In The Italian Cup 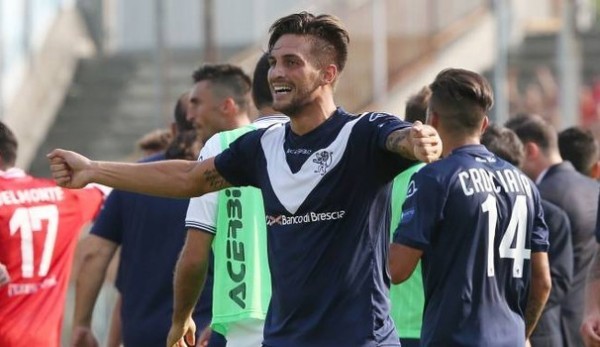 After upsetting Serie A side Udinese in the fourth round of the Italian Cup, Brescia put in another solid performance to continue their run in the competition.

Getting off to a flying start, Brescia received a penalty in the fourth minute of the match which was converted by Ernesto Torregrossa. Sandro Tonali increased the advantage after being left unmarked in the box by the Pescara defenders.

Torregrossa increased the lead to three, following up his own saved shot to put the ball into an empty net just before the halftime break.

Pescara came out in the second half with a point to prove, getting started in their comeback after Simone Romagnoli found himself in the wrong place at the wrong time, putting the ball into his own net.

Form striker Christian Capone then reduced the lead to one goal, converting a one on one chance with twenty minutes left in the match.

Brescia adjusted their tactics, putting all players behind the ball and securing their defences to see them come away with the victory.

They will now face Fiorentina who are currently sixth in the Serie A, Brescia will need to continue to perform above expectations and take advantage of any chance presented to them to produce another upset.

ScottT, mgriffin2012, Justice: Happy to be in a good position with the board

Jack: Pescara look a very solid side, it will be a tough match
Login to Quote

Jack
1 year
Eek! Almost lost that three goal lead in the second half there, but either way you look at it, a win is a win and you progress in the cup!
1
Login to Quote

mgriffin2012
1 year
An important result for you there, if I remember correctly you'll come up against one of the teams in Europe in the next round
1
Login to Quote

ScottT
1 year
Close in the end! However, that's another cracking result for you and the club. A fantastic cup run is occurring now.
1
Login to Quote