ScottT
1 year
Those results could be vital in terms of deciding your fate come the end of the season. It's in your hands now, which is always beneficial. Hopefully another strong month will allow you to be in a prime position to capture the title and promotion.
1
Login to Quote

Jack
1 year
Quite possibly a season-defining month there. A month full of wins is vital at this stage of the season and you should be proud!
1
Login to Quote

Getting off to a poor start, Brescia were upset by Venezia in 2-1 loss which saw Lagunari seal the victory with a 68th minute goal by Marcello Falzerano.

The Rondinelle responded to this loss with a dominant 6-0 victory which saw Alfredo Donnarumma score a hattrick purely from penalties.

To finish the month, Brescia secured consecutive 1-0 victories over Crotone and Carpi in solid defensive displays. 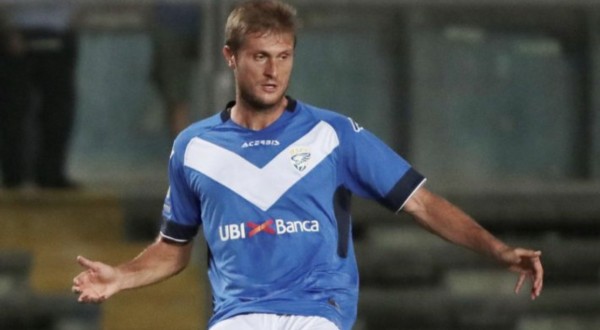 In an impressive month, Romagnoli has stepped up to lead the Brescia defence to see them only concede two goals in four matches.

On loan from Empoli, the 29-year-old is out of contract at the end of the season and it is yet to be seen where he will be playing football next season. 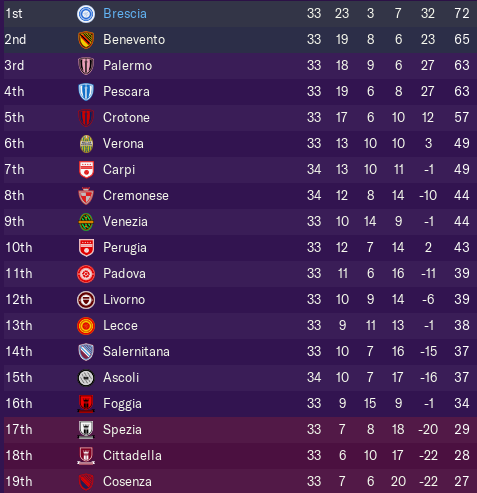 Brescia find themselves in prime position to win the Serie B title and secure promotion after Benevento and Palermo continued with their recent form slumps. This has seen Pescara emerge as late promotion contenders after some great end of season form.

At the bottom of the table, it would appear that the three teams to be relegated will be Spezia, Cittadella and Consenza. Only a superb run of form in the final three fixtures for any of these teams will give them a chance of surviving the drop.

Spraining knee ligaments during a training drill, back up goalkeeper Andrenacci is expected to miss the rest of the season for Brescia with a three to six week injury.

Adding to the troubles for Brescia in the goalkeeper position, third goalkeeper Minelli is set to miss one to two weeks with a hamstring complaint. It is expected that recent signing 16-year-old Alessio Furlanetto will be promoted to the first team squad as cover.

In the final month of the season, Brescia just need one win from the remaining three matches to seal the Serie B title.

Many media pundits believe they will clinch the title against Ascoli in the opening fixture of the month.

Justice: Crotone haven't been a side I have been worried about so far but have stayed in the fight for the top places, we will see who comes out on top

ScottT: Good to be in a position where I control my own destiny

Jack: The exact month I needed from the players, really happy
Login to Quote

Jack
1 year
Extending the lead at the top from 4 to 7 points in the space of a month is great work on your part and also helpful from your competitors for being the victim of bad form. The fixture of in-form Pescara will be tough, but with only one point away from securing promotion against lowly sides, you should be feeling very proud.
1
Login to Quote

ScottT
1 year
The title is all but yours, it would seem. Your side clearly have a lot about them, given they responded to a first loss in a number of games with a resounding 6-0 win. The stuff any manager would love to see.
1
Login to Quote

Justice
1 year
One win to guarantee the title. Time to lift the trophy!
1
Login to Quote

Promotion To Serie A Sealed For Brescia 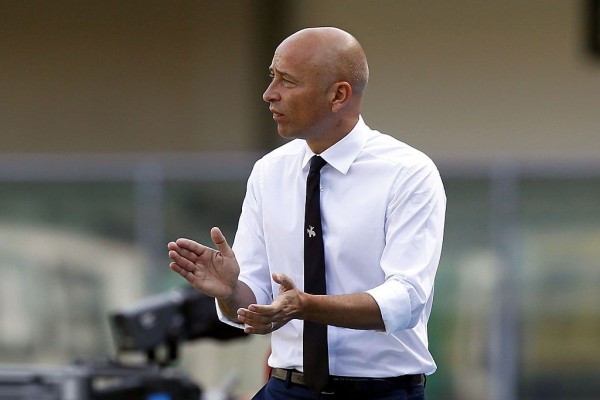 After an incredible season, Brescia have now sealed promotion to the Serie A after the 3-3 draw between Palermo and Cremonese.

The Rondinelle fans have credited the influence of Eugenio Corini and his 4-3-1-2 system in changing the fortunes of the club this season.

"It is very exciting to have promotion secured to the Serie A for next season" said Brescia manager Eugenio Corini. "We must now focus on our upcoming fixture at home against Pescara so we can seal the title." he added.

Pescara have proven to be a strong side all season, currently sitting in equal third on the Serie B table and are considered the form side of the competition. Should Brescia not be able to come away with a victory, they will have one more chance to claim the title with an away fixture against Livorno.

To win the title, Benevento who have also sealed promotion after their 1-0 victory over Cosenza will need to defeat Leece in the final fixture and hope Brescia claim one point or less in their next two matches.

Jack: Pescara have been one of my favourite teams to play against, they have been a very solid opponent throughout the season.

ScottT: It was not a performance I was expecting from my team but I certainly didn't expect three penalties in the match either

Justice: I certainly hope we do
Login to Quote

ScottT
1 year
Get in! Congratulations on promotion. Now to see the season out before the party can begin.
1
Login to Quote

Jack
1 year
An excellent season that has been very well documented by you. Now for the title!
1
Login to Quote Brescia celebrate after a goal during their final match against Livorno
• Brescia sealed the title with a 3-1 victory over Livorno
• For claiming the Serie B title, Brescia will receive €2,500,000 in prize money
• The Serie B title was last claimed by Brescia in 1997

In a battle coming down to the final fixtures of the season, Brescia have come out on top after their 3-1 victory over Livorno to claim the Serie B title.

Heading into the match, Brescia had drawn 2-2 with Pescara to see them requiring just one point to seal the title. If Brescia has lost and Benevento defeated Leece, Benevento would have claimed the Serie B title.

All fixtures on the final day were played at the same time and it was Brescia who got off to a flying start, scoring twice through Alfredo Donnarumma and Luca Tremolada. It was then Niccolo Giannetti who pegged a goal back for Livorno just before halftime. In the other match, Benevento and Leece went into the break at 1-1.

Coming back from the break, Benevento put some nerves into the Brescia fans when Massimo Coda converted a penalty to put them into the lead. It was then Alfredo Donnarumma who stepped up to break through the Livorno defence and converted a one on one opportunity to secure the title for Brescia, while the match between Benevento and Leece finished 2-2.

"This is beyond any of our expectations we had coming into the season, I couldn't be happier" said 35-year-old Brescia captain Daniele Gastaldello. "I could not have asked for more from our squad, they have fought through the highs and lows to see us finish as champions today" he added.

Benevento will join Brescia in the Serie A next year and it has been confirmed that Parma have been relegated. All other promotion and relegation positions remain in play as the competition still has three rounds remaining as the Serie B now enters the playoff phase of the competition.

Jack: Thank you Jack, happy to say the title is ours
Login to Quote

SonOfAnarchy
1 year
Congrats on sealing promotion to Serie A, doing so as Champions. Brilliant stuff. Looking forward to the next update.
1
Login to Quote

Jack
1 year
Fantastic season Griff. Will be interesting to see your aims for next year in the big boy league!
1
Login to Quote

ScottT
1 year
Congratulations mate. The champagne is out!
1
Login to Quote

It was not the finish to the season that Brescia fans would have hoped for with a loss to Ascoli and draw to Pescara not allowing the side to clinch the Serie B title.

In the end, a brace from Alfredo Donnarumma led the Rondinelle to a 3-1 victory over Livorno and the Serie B title. 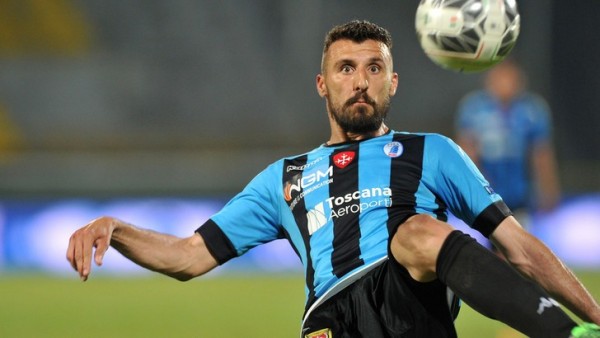 Despite not being in the starting eleven at the start of the month, an injury to Felipe Curcio gave Longhi an opportunity he took with both hands.

The 29-year-old had big shoes to fill but completed the task by making several key passes and tackles as well as contributing with a goal. 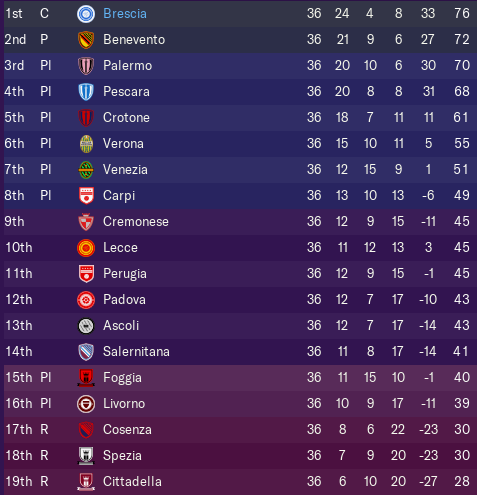 In the end, Brescia finish four points clear at the top of the Serie B table. Several strong teams are set to battle it out in the playoffs for the last promotion spot.

At the bottom end of the table, Foggia and Livorno are still not safe and will have to fight to keep their place in Serie B.

Suffering sprained knee ligaments in the 3-2 loss against Ascoli, Curcio is expected to be out for two more weeks but will be fit for pre-season.

Jack: When choosing the save, bringing a team from the division below, I wanted to have to fight it out to stay up but I feel I can be better than that with this squad