Justice
1 year
A good start as USMNT manager. I'm sure the fans' rendition of 'God Save The Queen' gave you goosebumps.
Login to Quote

Eoin97
1 year
A great victory in her first game as USMNT boss, against a dogged team in Peru. Hopefully Le Fleur can continue in the same vain for her tenure! 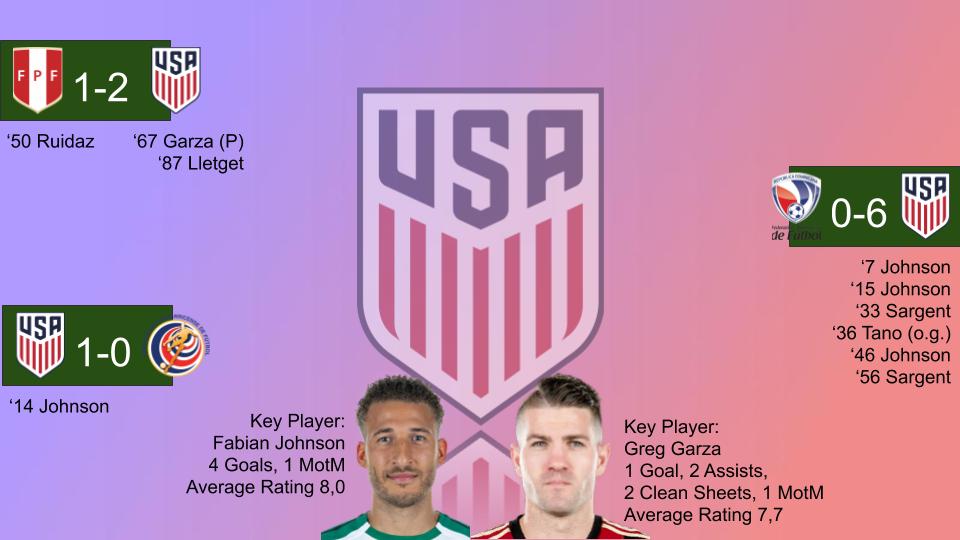 9 September 2019
We needed to continue our winning form, and we would need to continue it against the Dominican Republic. We were heavy favorites, but after days of travelling, away from home and after a tough game against Peru, anything could happen.

It would also be the first game of our Nations League campaign. We would make two changes as Lletget, who scored the winning goal against Peru, got rewarded for how he played in the Peru game as a substitute. Lletget would replace Darlington Nagbe.

The second change is in defence as John Brooks won’t be lining up against Matt Hedges, but would instead play alongside Matt Besler. Despite being important coming off the bench in the Peru game, Gyasi Zardes, who won the penalty that helped us equalize, won’t replace Werder Bremen youngster Josh Sargent.

The faith put in Sargent paid off as he, after just 7 minutes of play, sent Fabian Johnson away. Johnson made no mistake, beat the last defender and curled the ball past the goalkeeper. The Gladbach winger would also be responsible for doubling our lead. DeAndre Yedlin bombed down the wing and searched for Sargent with a cross. The cross went over Sargent’s head and fell in front of the feet of Johnson. Johnson took a touch and smashed the ball in at the near post.

After just half an hour of play, Josh Sargent grabbed a goal from himself. Pulisic reached the back-line and his cross fell to Sargent who arrived late in the box. He controlled the ball, beat one defender and finished it to make it 3-0. Things went from bad to worse when former Valencia player Tano headed the ball past his own goalkeeper to make it 4-0, which would also be the score going into half-time.

The second half was much of the same. We kept controlling, which resulted in two quick goals. Johnson scored one 40 seconds after the restart with thanks to good work from Garza and Josh Sargent scored his second after another DeAndre Yedlin cross. The game would end 6-0, despite Sargent and Adams hitting the woodwork as well as a Besler goal being disallowed for an offensive foul.

14 September 2019
After a great Peru win and a thrashing against the Dominican Republic it was time for our, arguably biggest, final game against Costa Rica. We would play the play-off game for the Confederations Cup. There was a lot on the line for both sides.

The same eleven players as the Dominican Republic game will be starting once again. We would play this game at a neutral venue, which meant I still haven’t made my official debut as manager in a home game yet, but with the amount of American fans in the stadium, it felt like a home game for us.

The fans played a huge part in helping the team break a very resilient Costa Rica. The first 10 minutes saw both teams trying to be able to play their game. One team was able to do such and that was Costa Rica. Costa Rica sat back and let us keep possession, but it didn’t come to any chances for us.
That was until the 14th minute, Fabian Johnson, who scored a hattrick in the earlier game, got himself into some space and found the back of the net. The first half continued in the same manner, both sides had one great chance though. Joel Campbell’s effort following a corner was cleared of the line and a Lletget longshot just missed the target.

The second half saw Costa Rica pushing for an equalizer. Bryan Ruiz and Joel Campbell were responsible for the best chances for Costa Rica. Ruiz’s free-kick was saved by Steffen and Campbell’s rebound shot was saved by a fantastic reflex from the Man City goalkeeper.

On the other side it was Lletget who saw Neves deny him from close range and Johnson who couldn’t get his foot onto a low Yedlin cross. Despite the chances, no side was thus able to score, meaning we would walk away as winners.

Manager’s thoughts
3 games, 3 wins. It’s all I could’ve hoped for. We were wasteful at times in front of goal, and we relied on Steffen a bit too much at times, but it’s early days and I’m confident we can work on that.
Login to Quote

Jack
1 year
Some really great results in there! Really showing quality against some tough sides.
Login to Quote

TheLFCFan
1 year
Greg 'the GOAT' Garza! A goal and two assists. A massive win over Dominican Republic followed by an impressive result against Costa Rica, Rosie is certainly starting off well as the USMNT job.
Login to Quote

Justice
1 year
Not bad results at all, you're really setting the tone as manager!
Login to Quote

ScottT
1 year
Well done to Rosie on some excellent results, particularly against Peru. I think they're a very well-managed side.
Login to Quote

ImThatSybGuy
1 year • Edited
16 September 2019
After a night of travelling I arrived in Chicago just past midnight. Arrival was exactly what I expected, loaded with press. I did my duty as manager and talked to some journalists that were gathered around me. During the final interview I spotted Abby in the corner of my eye, waiting patiently for me. I quickly wrapped up the interview and walked towards her.

After two weeks I was really happy to see her again finally and I ran into her arms, holding her tightly. We were there, hugging, for what seemed like eternity, but like all nice things it had to come to end. The ending, unfortunately, wasn't one I dreamed of, as I let go of Abby, I noticed journalists were gathered around me. As if that wasn’t enough I got bombarded with questions, all of which were about the ‘mystery woman’, referring to Abby.

My lie did work, we were left alone, completely left alone by the journalists. Unfortunately, the one journalist I wanted to speak with ever since I got off the plane, was the only one that wouldn't speak with me. We spend the whole taxi ride together, without a single word. We finally arrived back home and I hoped Abby would talk with me, but she didn’t. She went straight to the bedroom and didn’t even try to make any eye contact with me.

I grabbed myself some food and was ready to join her to enjoy a good night of sleep. Upon entering the bedroom, Abby jumped out of the bed and as she walked closer to me, I saw her face being filled drowned in tears. She handed me a blanket and a pillow and I got sent to the couch. Our first night living together, and we were the furthest apart we've ever been.

I woke up a few hours later after hardly any sleep, because of how uncomfortable the couch is. As I stood up I noticed Abby at the dinner table, probably working, ignoring me as I sat down opposite with he
“Are you- Are you mad with me?”
Abby let out a small sigh and replied to me, still avoiding any eye contact with me.
“I’m not mad, I’m disappointed.”
“I’m sorry, I didn’t think about what I said.”

Abby raised her voice to the point of yelling.
“I’m disappointed you even had the guts to lie. Are you embarrassed of me that much, that you need to lie?”
“I’m not embarrassed of you, that’s ridiculous. I love you”
“You only love me indoors apparently, you don’t feel comfortable with our love outside of that.”
“That’s not true, it really isn’t”
“Then why did you lie?”
“Because I’m scared”
“Scared of what?”

Slowly but surely, tears started rolling down my eyes. As the tears came, Abby's voice lowered to a compassionate tone.
“Scared of everyone, remember the outrage when I was appointed, because I was a woman, imagine how bad the abuse that I get is going to get when this comes out.”
“Rosie, I’m sorry. I didn’t know how much it affected you. I really didn’t.”
The tears rolling down my eyes slowly turned into full-on crying.
“You really think all the abuse doesn't get to me.”
“You have never seemed to be bothered by it.”
“I don’t like to show my weakness. I don’t want to.”
“You can be vulnerable around me, Rosie. I promise. I love you.”
“I love you too.”

ScottT
1 year
What a lovely ending to this particular update. :')
Login to Quote

TheLFCFan
1 year
It must be tough for Rosie, one day sat on the bench in a small club game the next the manager of US national team. Her relationship with Abby is beautiful and she should be proud to tell anyone, no matter how hard it may be.
Login to Quote

Justice
1 year
Well I guess all roses have thorns.
Login to Quote

Jack
1 year
It's a tough place being under the spotlight of the media and people often slip up when under that pressure. Good to know that they have such a strong relationship regardless of any public mishaps.
Login to Quote