ScottT
1 year
Congratulations! Scoring early-doors seems to be a common occurrence that is really disrupting your opponents on a game-to-game basis.
Login to Quote

Justice
1 year
It looks like you just about Coasted past a stern opposition, well done!
Login to Quote

Eoin97
1 year
An emphatic victory against a strong Ivory Coast side filled with talent. Congrats!

ImThatSybGuy
1 year
8 June 2019
The Ivory Coast win saw us going through the quarter-finals, where we would play the Czech Republic. The Europeans topped Group E, potentially the weakest group there was. They beat Fiji 8-1, put 4 past the UAE and closed their group with a 3-0 win against Nigeria.

In the first knockout round, Czech Republic played Australia. While Australia were considered favorites for the tie, the Czech Republic dominated the game and won the match deservedly with 2-0.

The key players for Czech Reupblic are striker Antonin Svodoba and Michal Sadilek. Antonin Svodoba is a striker playing for RB Salzburg in Austria, scored 5 times already, which makes him one of the top scorers of the tournament, only behind Nigerian Ody Alfa. Captain Michal Sadilek enjoyed a fantastic 2018/2019 campaign playing for Jong PSV even making his debut in the PSV first team this March. The midfielder currently tops the ranking in terms of assists with 5 to his name.

As the first half began, once again we took our responsibility, and we were immediately in control of the game. While that did get us some good chances, the big chances were for our opponents. Lukas Vorlicki hit the post, a Sadilek long-shot was saved by Muse and a Marek Abraham header went wide.

Captain Gianluca Busio stepped up to take the penalty, but he saw his effort being stopped by Manchester United goalkeeper Matej Kovar. While we missed the penalty, it felt like a turning point in the game, we dominated and hardly conceded any chances anymore.

With a few minutes left to play Alexis Mendez celebrated the 1-0, only to see it get disallowed for offside from George Bello, who assisted the Freiburg midfielder. As we looked desperate to get the go ahead goal, we failed to do so.

We would get into extra time, where fatigue kicks in and concentration is even more important. Right from kick off we picked up where we left off, finally resulting in a goal 4 minutes into extra time. FC Delco midfielder David Kim created space for himself and his shot was unstoppable for Kovar.

After the 1-0 the game changed, suddenly we didn’t need to create anymore, which was shown by our opponents trying to get control, while a Cvancara shot almost went in, the Czech Republic failed to get themselves an equalizer.

As the second half started, the Europeans got desperate, trying to find an opening. That opening did come in the 112th minute. Fortunately for us it was substitute Mendez who found that space, the midfielder scored once again, but this time it wasn’t disallowed. With seconds left to play, Mark McKenzie made it 3-0 heading in an Alexis Mendez corner.
Login to Quote

ScottT
1 year
The Americans look a dangerous force. They seem to have that ability to get things going from the off, but also have a tremendous amount of stamina - which allows them to control the tempo and really tire the opposition. Well done to Rose on another excellently managed game.
Login to Quote

TheLFCFan
1 year
They took you to extra time but clearly your fitness is at the highest level. The 3-0 win will do wonders for morale and now you have just two games to go before potentially being named World Champions!
Login to Quote

Jack
1 year
Rose is really beginning to show her talent here. It's a tough going into a man's game as a female but she is turning the future of American soccer around almost single-handedly!
Login to Quote

ImThatSybGuy
1 year
11 May 2019
In our semi-final would see us play against Spain once again, while former group mate Argentina were playing against Poland. After topping the group, Spain narrowly beat Colombia 4-2, a game which saw them score 3 times in the final 8 minutes in the 2nd round. While they comfortably beat rivals Portugal 4-1, thanks to an Abel Ruiz hattrick.

Despite only narrowly edging the first game, Spain were heavy favorites once again. The game was exactly what you can imagine, two sides trying to control the midfield, but failing to do so. The game wasn’t really all that exciting for the first 20 or so minutes of the game. Both sides hardly created anything and both sides were too scared to allow the opposition to counter them. It was a surprise when the first real chance of the game did manage to find the back of the net. Siad Haji just about managed to reach a cross from Carleton with his toe as he beat Pena.

While the scoreboard changed, the match didn’t. Spain tried to control, created some chances, then we controlled the game for a while again, created some opportunities, but both failed to capitalize. That was until minute 37 when Sergio Gomez beat Muse with a deflected shot to score the equalizer.

With the game level again, both sides continued their quest to control the midfield. It wasn’t until the second half that a side did manage to do so. Unfortunately, Spain managed to pin us down deep in our own half, allowing them to score the 2-1 via Abel Ruiz.

After the 2-1, Spain continued and started to choke the life out of the match, we kept attacking, but we didn’t create. In the 82nd minute disaster struck. Haji was about to shoot, before being brought down by Oriol Busquets, however the referee didn’t blow his whistle, allowing a quick Spain counter to find left-back Juan Miranda to score the goal that seals our fate.

Unfortunately we failed in our attempts to get back into the game, losing the game 3-1. Meaning we’ll be playing the loser of the Poland-Argentina match to secure a bronze medal.
Login to Quote

TheLFCFan
1 year
Ahh, Unlucky! Spain were always going to be a massive challenge to overcome and it is no disappointment in going out to such a great side! Hopefully Rosie can secure a bronze medal!
Login to Quote

ScottT
1 year
A disappointing way to end a fantastic run in the tournament, but unfortunately Spain was one step too far.
Login to Quote

Justice
1 year
Heartbreaking, but you can take pride in how your team has performed since you took charge. Time to start a new successful chapter in your reign.
Login to Quote

ImThatSybGuy
1 year
15 June 2019
After getting beat in their Semi-final, Poland would be our opposition today. Poland showed themselves as a defensive side, conceding just 1 goal in the tournament, which was in the semi-final against Argentina. Poland surprised everyone, beating Germany in the quarter-finals, via a Marcel Streljau goal. Poland did have quite an easy run before the Germany game, getting to play in group C, alongside Vanuatu, Syria and Ghana, before playing the 2nd round against Ecuador.

Lukasz Bejger, a Manchester United defender, is undoubtably the key player, scoring once and getting multiple man of the match awards for his defensive efforts. In attack, it’s 15 year old Marcel Streljau, playing for Legia Warszawa, who needs to help the host nation to a 3rd place.

The game started off like a lot of our games, like expected, Poland sat back inviting pressure, while we went for control straight away. It didn’t take long for us to create some great chances, Carleton narrowly missed and Busio’s long-ranger got saved by Majecki. It wasn’t a surprise when Jimmy Ramirez did finally manage to grab the first goal of the game, the SC United Battery winger, who has agreed to sign for Dutch side PEC Zwolle, got his head on a George Bello cross to score the opening goal.

In the 39th minute almost an exact same goal got scored, once again it was Jimmy Ramirez who was found by George Bello, this time volleying it in. As the first half came to a close, Jimmy Ramirez almost grabbed his hattrick, with a curling effort, being denied by the woodwork.

The second half didn’t change that much, resulting in a quick goal from Alexis Mendez, who picked up the ball after a poor clearance from the Poland defense. Straight from kick-off it was Marcel Zylla who scored the 3-1, punishing our defense for a lack of concentration. The goal was nothing more than a consolation goal, as Poland failed to get anything going in the match, accepting the fact we were better in the game.

The match had finished and we were ready to pick up our bronze medals. As I stood there I felt an immense happiness, seeing everyone be so grateful to pick up the medal as a trophy for our hard work over the last year. At the same time I felt excited, excited for the coming years as manager.
Login to Quote

ScottT
1 year
Well done to Rose on claiming a third place finish and a bronze medal. She has certainly proven that gender means nothing in sport and that women can easily succeed if given the opportunity.
Login to Quote

TheLFCFan
1 year
A great win against a side who have clearly been very good, conceding just one goal up untill this game. Rosie will take inspiration from this triumph and I am looking forward to seeing where it takes her!
Login to Quote 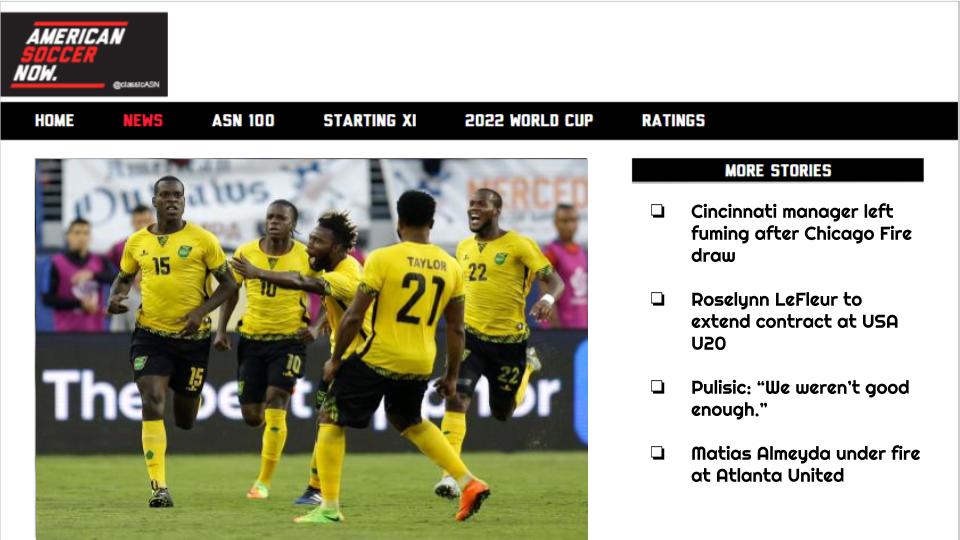 Gregg Berhalter to leave U.S.A. post after Gold Cup failure
Following the shock exit to the hands of Jamaica, Gregg Berhalter has announced his intent to leave as first team manager. The former Columbus Crew manager has told reporters this morning that he decide to resign, stating: “The exit from the Gold Cup was an embarrassment to the country, I’m disappointed in myself and therefore want to resign.” Although the 45-year old has reportedly spoken to the USSF about a departure, the USSF is debating whether they want to accept Berhalter’s resignation.

A press secretary from the USSF has told in a statement: “We truly regret the position Mr. Berhalter holds, but we continue to keep faith in him as manager for the national team and thus we don’t accept his resignation for now. We will talk to Mr. Berhalter to see if there is a way to keep working together.” If the attempt has any effect will be known soon. Gregg Berhalter has been manager for almost a year at this point, succeeding Dave Sarachan in July 2018.

If Berhalter does leave the job, former Sporting KC manager Peter Vermes, who was sacked in May this year is considered the favorite for the job. Vermes won the MLS Supporters shield and the MLS Cup in the 2018 season, but was sacked after a disagreement with the board late May.

If Berhalter were to leave his post, many experts are forecasting a storm of managerial mutations within the MLS, which could see a lot of clubs having to look for a new manager, opening up positions for a lot of managers.
Login to Quote