TheLFCFan
1 year
Very interesting. Could we see Rosie become the National head coach?? I expect her name will at least be in the running considering her great start at the under 20s side!
Login to Quote

ScottT
1 year
This could be a fantastic opportunity for Rose, should she be considered for the role.
Login to Quote 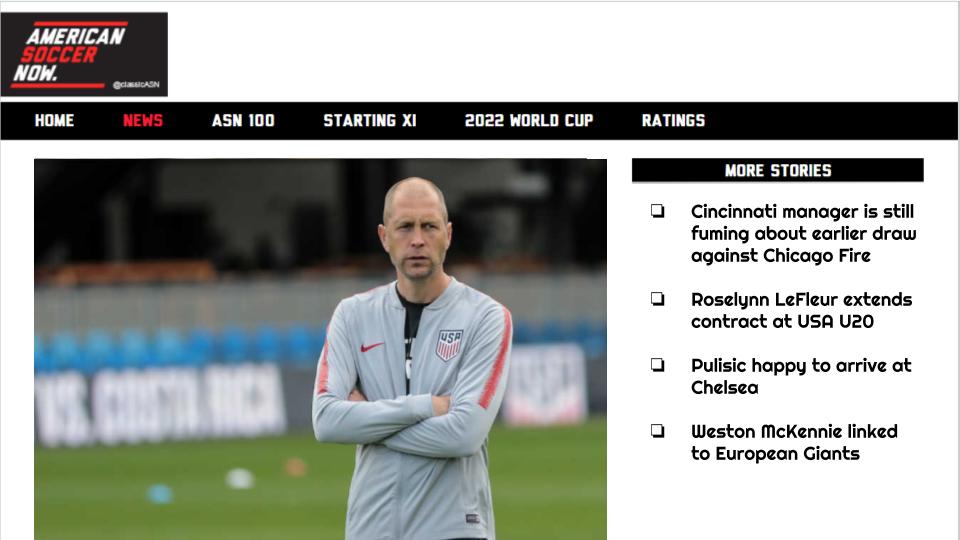 Gregg Berhalter leaves USA post
As of today, 7 July, Berhalter has resigned as manager of the United States. The exit follows the earlier catastrophe, as the USA lost against Jamaica and were therefore knocked out of the Gold Cup. Berhalter had told press about his exit before, but the USSF tried to keep him aboard, however the USSF has failed in their attempts to keep Berhalter.

According to sources within the USSF, the USSF has already spoken to the next manager of the USMNT. Sources believe David Wagner, who was considered one of the potential managers, rejected the opening. Therefore, it is looking more and more likely that the next manager will be one of Caleb Porter or Brian Schmetzer.

Both Porter's Columbus Crew and Schmetzer's Seattle Sounders have been in tremendous form this campaign. Columbus is currently dominantly leading in the Eastern conference with a 9-point gap on Philadelphia Union, their nearest competitors. Seattle Sounders are in first place as well, in the Western conference, the Sounders have a 2-point gap, but have played 3 less games than LA Galaxy.

Update (9 July 00:40): A photograph surfaced, which puts Porter in a Chicago hotel. Although unclear, the photographed person resembles Caleb Porter. Porter would apparently be in Chicago to negotiate the final details of his contract, before being presented in the next week.

Update (9 July 2019 12:16): Columbus Crew has denied there has been an official approach by the USSF for manager Caleb Porter

Update (12 July 8:33): Caleb Porter has reportedly been spotted at the USSF Headquarters.

Update (12 July 11:08): USSF officials deny that an approach has been made for the post of USMNT manager.

Update (13 July 2019 17:54): The USSF has scheduled a press conference tomorrow. Although not specified, the press conference seems to be an introduction to the next USMNT manager, which is likely to be Caleb Porter.
Login to Quote

Jack
1 year
Well well well... This leaves a gap for a promising coach who has proven herself at youth level, but Porter seems to be the favourite. However, I wouldn't put money on him getting the job yet...
Login to Quote

ScottT
1 year
Regardless if he takes the job or not, there is to be a vacant post somewhere... that certainly leaves the door open for Rose to get an opportunity!
Login to Quote 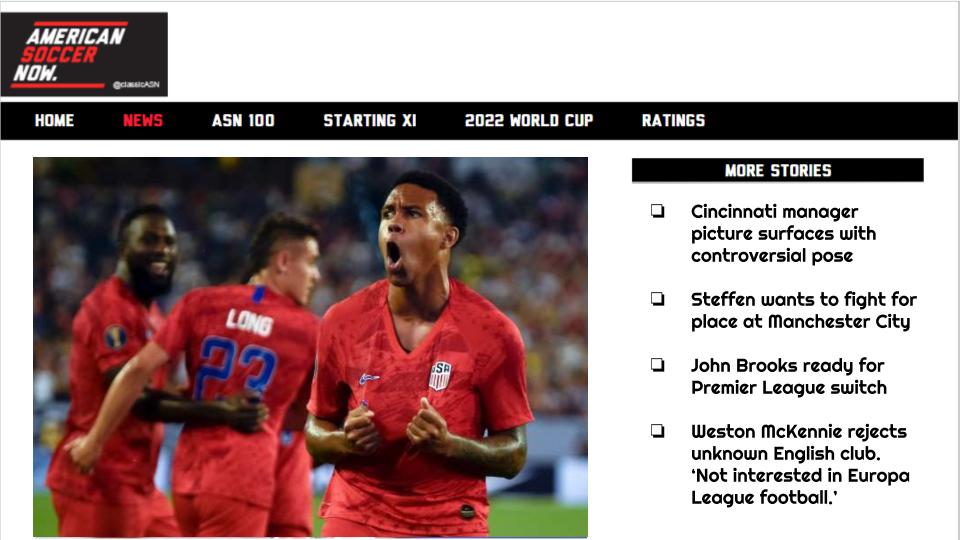 The news comes as a huge surprise as LeFleur signed a contract extension keeping her as manager of the U20’s two weeks ago. LeFleur impressed with the U20’s winning the CONCACAF U20 tournament in dominant fashion before getting a bronze medal in Poland last month.

LeFleur told press after her announcement: “I’m incredibly happy to be here and look forward to work alongside some magnificent players. I’d like to thank everybody at the USSF for this chance and I’m determined to help this group win a lot of things.”

LeFleur reportedly signed a three-year contract which would see her be manager of USMNT until the 2022 World Cup. When asked about his new manager, Michael Bradley, captain of the USMNT, told: “She has got an incredible record so far and I’m excited to see what the future brings with her in charge.”

LeFleur’s first game in charge will be away against Peru in a friendly, before her first competitive game, almost a week later against the Dominican Republic in the Nation League Group stage.
Login to Quote

A great step up for Rose. Hopefully she can continue her great start to management!
Login to Quote

ImThatSybGuy
1 year • Edited
It was a day since my official introduction as manager of the USMNT. I’ve spent most of the last few hours on the phone, talking to all kinds of people. Journalists, former internationals and MLS representatives. All have been really kind to me wishing me luck.

However, like always, controversy was imminent. I had opened my laptop, made myself a lunch and sat down. It didn’t long before I opened up an article: ‘We don’t respect our soccer team!’ I was intrigued, because I really didn’t know what to expect. As curious as I am, I opened the article and got greeted by a beautiful opening picture. Mumbling “Here we go” as I quietly scrolled down. 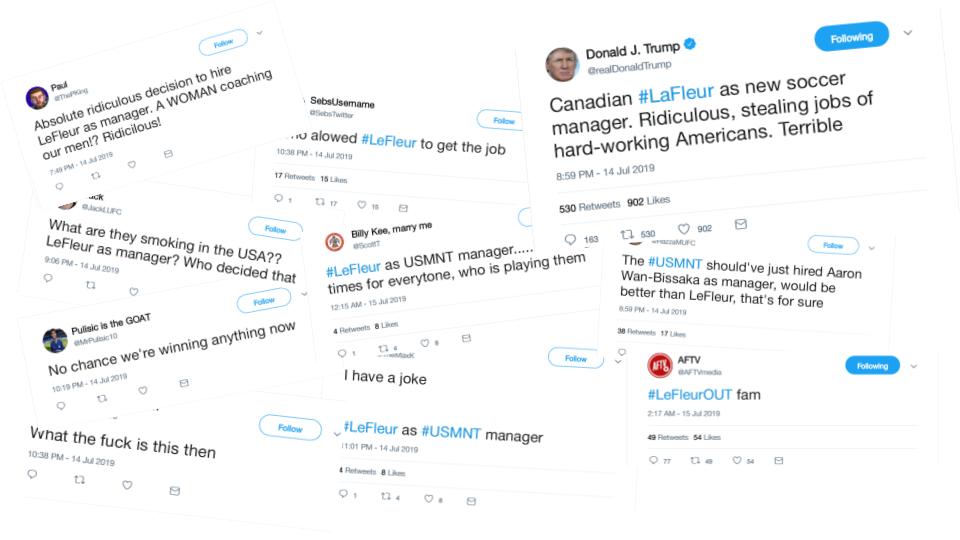 We don’t respect our soccer team!
Article written by Charles A.

Yesterday the USSF has announced the appointment of Roselynn LeFleur as USMNT manager in what can only be described as the biggest joke of the year. With no experience whatsoever, you can only ask who is responsible for this choice. Roselynn LeFleur has no reason to be manager at all. The decision to hire her as U20 manager in the first place was laughable, but it was acceptable. To be putting her in charge of maybe our best generation of football players is mind-blowing.

I had read about 5% of the entire story when someone knocked on my door. I walked to the door to see Maddie waiting in the hall. “OMG Rosie, congratulations. This is amazing. How are you feeling right now. Good right, right,” Completely stunned with her happiness I froze a little bit. “Say something Rosie” “Oh yeh sorry, It’s amazing. Absolutely fantastic.”

We talked for a little while until I heard someone else knocking on the door. “You expecting someone, Rosie” Maddie asked. Slowly walking to the door I told her I wasn’t. I opened the door and to my surprise it was Abby.

“Abby, what are you doing here. We haven’t spoken in forever.” Which is true, we talked for a while after the whole ‘Charles-incident’, but after I left for Poland we stopped talking. “Exactly, we need to catch up, you know. Something amazing just happened.” Abby kept rambling on for a while until she noticed Maddie. She introduced herself and started rambling again, this time she was stopped after a quick look at my laptop, where the article was still on the screen.

“You might want to close that, you shouldn’t have to read that.” I didn’t reply and looked confused. “Charles is at it again.” That’s when it all clicked. Charles A. is the Charles, the Charles who quite honestly might’ve been the worst person I’ve met in a while. “Didn’t even realise that. Look it might not be easy to block stuff like that, but you have to. Do it for me, for your sister and for everyone else who does believe in you.”

She was right, of course she was, she is always right. It’s annoying you have someone like that in your life, but it’s very nice at times as well. This was one of those times. She continued: “Look Roselynn, I know this may be weird, but I’ve got a new job recently and I want to interview you. I know you don’t do that many of them, but please let me, do me a favor.”
Login to Quote

ScottT
1 year
Charles seems to have a few issues. It's best to ignore him and focus on the task ahead for Rose. She's already proven herself with the national side at U20 level, so hopefully she can be equally, if not more, success at senior level.
Login to Quote

Justice
1 year
Ignore Donald. He still hasn't figured out how to tie his laces yet.
Login to Quote

Jack
1 year
It’s certainly an unusual move! There are bound to be critics (although the President wasn’t one I expected). Best way is to do what she did last and prove her credentials.
Login to Quote

This went on for a little while, until Maddie interrupted: “Do the interview Rosie, she isn’t asking much.”
“Okay, okay. I’ll do the interview.” Abby grabbed her laptop out of her backpack, sat down and waited for me to do the same. Maddie moved herself to the couch and switched on the TV.

“Thank you, Roselynn.”
“You can call me Rosie, it’s fine.”
“Very well then. Rosie, how does it feel to be the new manager of Team USA.”
“It’s ofcourse a big job, but I’m not going to keep my head in the clouds and just be grateful I got the job. I want to show everyone why I got the job.”
“What are your goals with this team?”
“Simple, I want to win. Not just trophies, but all the friendlies as well. The team is a fantastic mix of talented youngsters and veterans and we can really do well.”
“What’s your aim with this side?”
“Like I said, to win any and every game. We have the Nations League coming up as well as a qualifier for the Confederations Cup. It would be fantastic to take part in the Confederations Cup and I’m confident we can do well in the Nations League too.”
“This is short term, what about long term?”
“We have got a World Cup in 3 years. We couldn’t qualify last year, but my goal is to get this side to Qatar. We have got a little while until we start that campaign, but we’re determined to make sure we’re well-prepared for the qualifiers.”
“On a different note, did you expect to be named as team USA manager?”
“Quite honestly, no. I know it’s a bit of a cliche, but I really didn’t see it coming.”
“What do you think of the backlash regarding your appointment?”
“I’d be lying if I’d say I ignore it, but I try not to take it with me. I want to shut all those people up and show them a team they can be proud of. Whether they are against me or not.”
“Why do you think there is that much backlash?”
“You shouldn’t ask me, it might have to do with my lack of experience, my age or, how bad as it might be, my gender. The group that really can’t come to terms with me being manager, because I’m a women, really will never change their viewpoint. It’s unfortunate, but the truth.”
“What would you like to say to those people?”
“Wait and see, just wait and see.”

Like that our interview finished, we talked for a little while and Abby was about to return home. As she walked to the door, she turned and said: “I have to be honest, Rosie. I’m not here for an interview. I’m not employed by any newspaper, whatsoever. I just wanted to speak to you.” It went silent for a few seconds. Abby took a deep breath: “I love you.”

I froze in shock. Both of us avoided eye contact with each other and things got really silent. “You should go Abby.”
“Call me, please”
“I just need some space. You lied to me, you took advantage of me.”
“I’m sorry you see it that way, but Rosie I’m serious, I really do.”
She walked out of the door, making a phone gesture before I shut down the door behind her.
Login to Quote