Glenn T
10 years
Liverpool's first European match for quite awhile now, is against Dinamo of Croatia - which we won 5-1. After only one match we top the group with 3 points, with Inter and Atletico Madrid drawing against each other. Inter is 2nd with 1 point, Atletico 3rd with also a point, and Dinamo has 0 points. I simply can't see Dinamo getting out of this group... Inter or Atletico? Inter maybe. I hope to take Liverpool to at least the semi-finals.
Login to Quote

On my new signings, Martin Montoya and Carlos Fierro have shone the most.

Felipe Anderson has been very average in all the matches he has played in but my coaches are still convinced he will turn into a megastar.

Martin Montoya is keeping Glen Johnson out of the team very well, putting in a wonderful series of performances to aid the team's cause of mounting a title challenge this season, also coming runner-up in BOTH the September Player of the Month and September Young Player of the Month.

Carlos Fierro is also scoring regularly and also duly awarded the September Young Player of the Month award. He currently has 3 league goals in 6 league appearances but in all competitions he hass 5 goals in 7 appearances.

Yaya Sanogo has just recovered from an injury he got at his previous club and I introduced him as a sub against some English Premier Division club, but he only lasted two minutes before getting injured again. Thankfully his injury is nothing serious and he'll be available for selection for the next match... but seeing as he can only last two minutes at the moment I'll probably try to introduce him only as a sub more and give him a few Reserve matches until he regains match fitness.

Glenn T
10 years
We did well to overcome Inter Milan 1-0 as great link-up play by Jonjo Shelvey and Luis Suarez enabled Jordan Henderson to be on the receiving end of Suarez's lovely ball and score an easy tap-in. We now look more and more certain to progress to the quarter finals as Atletico Madrid surprisingly only managed to take a point from Dinamo and now as it stands, Liverpool is 1st in the group with 6 points, Atletico 2nd with 2 points, and Inter Milan and Dinamo both at 3rd and 4th respectively with one point each. Glen Johnson has however suffered injury and will be out for 3-4 weeks, joining Steven Gerrard, Dirk Kuyt, Seydou Keita, Joe Cole, and Daniel Agger on the injury list.
Login to Quote

Glenn T
10 years
We took Southampton by storm as we trounced them 3-0 and Yaya Sanogo secured his first two goals for the club. The young French striker was spectacular today, scoring two out of the three goals and assisting the last one. He has a bright future ahead at Anfield.
Login to Quote

Glenn T
10 years
Glen Johnson has returned from injury and my coaches report that Danny Wilson and Robbie Cotton have both made some improvements as players over the last few months - Danny Wilson showing remarkable improvement in training and my coaches believe it's due to the Scottish defender's exposure to the first team.
Login to Quote

Glenn T
10 years
On other injury news, Seydou Keita is extremely close on a return to full fitness while Dirk Kuyt can only return in about a month and a half. Steven Gerrard and Suso are on the long term injury list and the Liverpool fans won't be seeing them for awhile.
Login to Quote

Glenn T
10 years
We lost to Atletico Madrid 3-2 in the Champions' League group stages, but we still remain top with 6 points while Atletico is 2nd with 5 points. We next lost 2-0 to Man Utd in the Premier League and they climbed above us to 2nd while we dropped down to 3rd. It was a disappointing result but the lads bounced straight back and claimed a 3-0 win over Chelsea in the League Cup Fourth Round which propels us into the quarter finals where we face Derby County. Last but not least, we completed a massive triumph over Newcastle United 5-1.

Carlos Fierro injured himself in the game against Newcastle, scoring and then getting injured less than a minute later - the bad news is that he will be out for at least two months.
Login to Quote

Seydou Keita has returned from injury which is good news, and he'll definitely bolster my central midfield which in my opinion is the position that is lacking the most talent, with Jordan Henderson, Jonjo Shelvey, and Felipe Anderson all only contributing average performances at best.

In a last bid to keep Doni at the club as back-up keeper I had a private talk with him and tried to convince him that he was a key player for the club and the squad despite his backup role, however he didn't buy it and argued that he could be better than Pepe if I gave him the chance. Well screw him then!

Doni's contract expires at the end of the season so I'll probably be looking for a new quality backup keeper.
Login to Quote

Glenn T
10 years
Fernando Muslera, 26-year-old Uruguayan keeper who currently plays for Galatasaray in Turkey, and Timo Horn, 19-year-old German keeper who is a hot young prospect at FC Koln in his homeland, are both being scouted.
Login to Quote

Glenn T
10 years
Muslera is a quality keeper who can easily be starting matches every week at a mid-table club like Everton - would he come to Liverpool to be the backup? I see him as a great successor to Reina but the latter is only 30 while Muslera is 26, and will Muslera want to warm the bench for at least another four to five years? No, he wouldn't.

According to my scouts Timo Horn doesn't have the potential to be better than Reina... yet. However Horn is young. Unfortunately my scouts have reported that both Galatasaray and Cologne will demand 10 million for their keepers.
Login to Quote

Glenn T
10 years
Score! The Team of the Week back four is completely manned by Liverpool, well done lads. 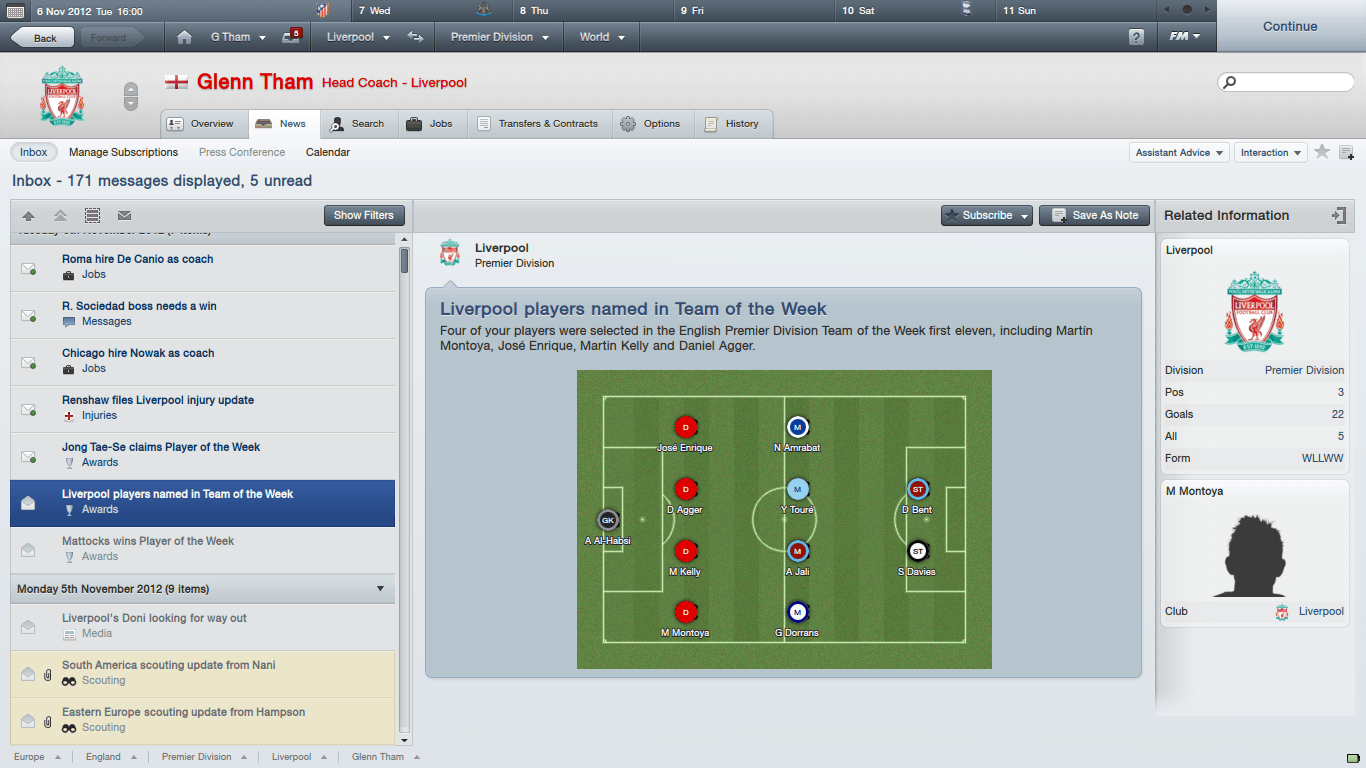 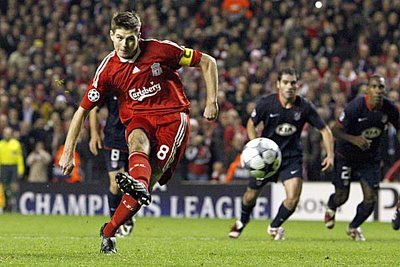 Tham's Liverpool battled to a 4-2 win over Atletico Madrid in the Champions' League today. Tham will be savoring the result as before the match was involved in a short war of words with Atletico manager Diego Simeone, who started the argument by speaking to the press that "Liverpool was dreaming if they thought they could win against Atletico". Colombian striker Falcao opened the scoring with a blazing shot and Atletico briefly took the lead for a few minutes but the Reds immediately responded through a Luis Suarez goal. Suarez went on to score two more times to secure his hat trick and Jordan Henderson scored the last goal for Liverpool in the 59th minute. Falcao pulled one back for Atletico and claimed his second goal of the match with a beauty in the 66th minute but it proved to be only consolation.

Liverpool remain at the top of their Champions' League group, while Inter's win against Dinamo take them 2nd, and Atletico Madrid slip to 3rd after their loss to Liverpool.
Login to Quote

Lethal_Touch101
10 years
Loving the story..I knew Montoya would do well for you

Marc Barta should be your next signing as I'm in 2014/15 and he is Barcelonas best centre back!!!
Find Joaquim bento? A left back from Portugal he is a regen but quality.

I will be updating my save tonight

Glenn T
10 years
Thanks mate... Yes he is doing spectacular at Liverpool.

I would take a look but what I don't need is central defenders at the moment. Coates, Kelly, Wilson, Agger all manning the central defence - I even had to move Carra to defensive midfield because there was absolutely no space for him in the center. Skrtel is on the way out of Liverpool too.
Login to Quote