Glenn T
10 years
Liverpool has drawn against Russia's Zenit St. Petersburg in the first knockout round of the Champions' League.
Login to Quote 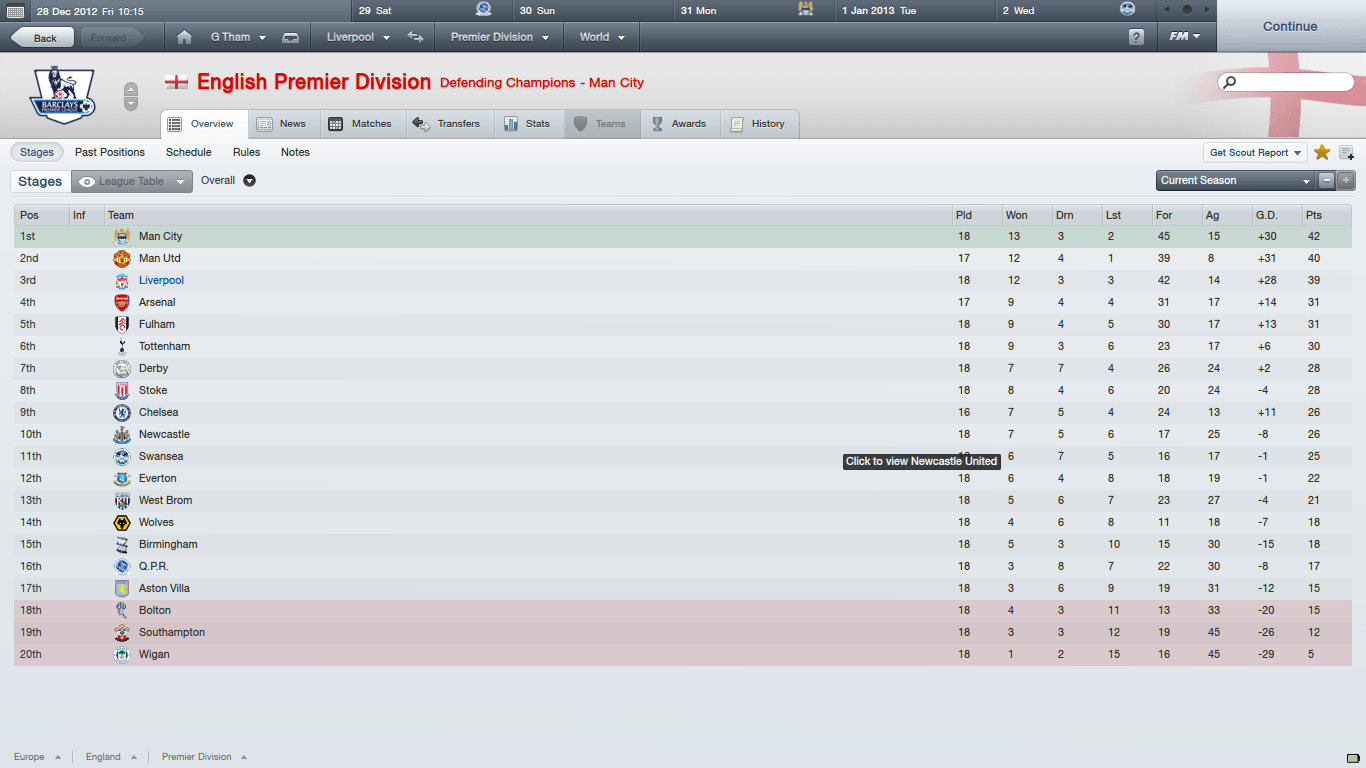 The January transfer window has started and already three clubs: Wolfsburg, Southampton and Fulham have made 4.5 million offers for him. All three offers have been accepted.
Login to Quote

Raheem Sterling has returned from his loan spell while Dirk Kuyt and Craig Bellamy have been offered to clubs but none of the apparently interested clubs are willing to make a move for them at this time.

Sebastian Coates, Luis Suarez and Felipe Anderson have been attracting a lot of interest from FC Porto, Real Madrid, and Real Sociedad. I am not willing to sell Felipe Anderson for any price since he has only joined us permanently six months ago and he could be a potentially big player for Liverpool, unless Real Sociedad offers 50 million or something which is unlikely. Rumors are also flying that Real Madrid are lining up a 12 million offer for Luis Suarez... they are nuts if they think they can get Suarez for less than at least 25 million. However the Sebastian Coates to Porto thing is NOT a rumor and I have confirmed to the press that Porto had submitted a 6.5 million offer for Coates, but... REJECTED!

Martin Skrtel has moved to Wolfsburg in the Bundesliga for 4.5 million. I wish Martin luck in his adventure in Germany and am sorry I couldn't keep him at Anfield, but with Agger, Coates, Kelly and Wilson he isn't getting any playing time so I feel it was wiser to sell him away. Heck, even Jamie Carra is playing out of position these days - regularly playing in defensive midfield or as a full back. Been a long time since he played as a central defender under me.

I now have about 5 million from the Skrtel deal and I might look to bring in somebody be it a youngster or someone else...

Also Manchester United have signed Eden Hazard from Lille for a bank-breaking 35 million.
Login to Quote 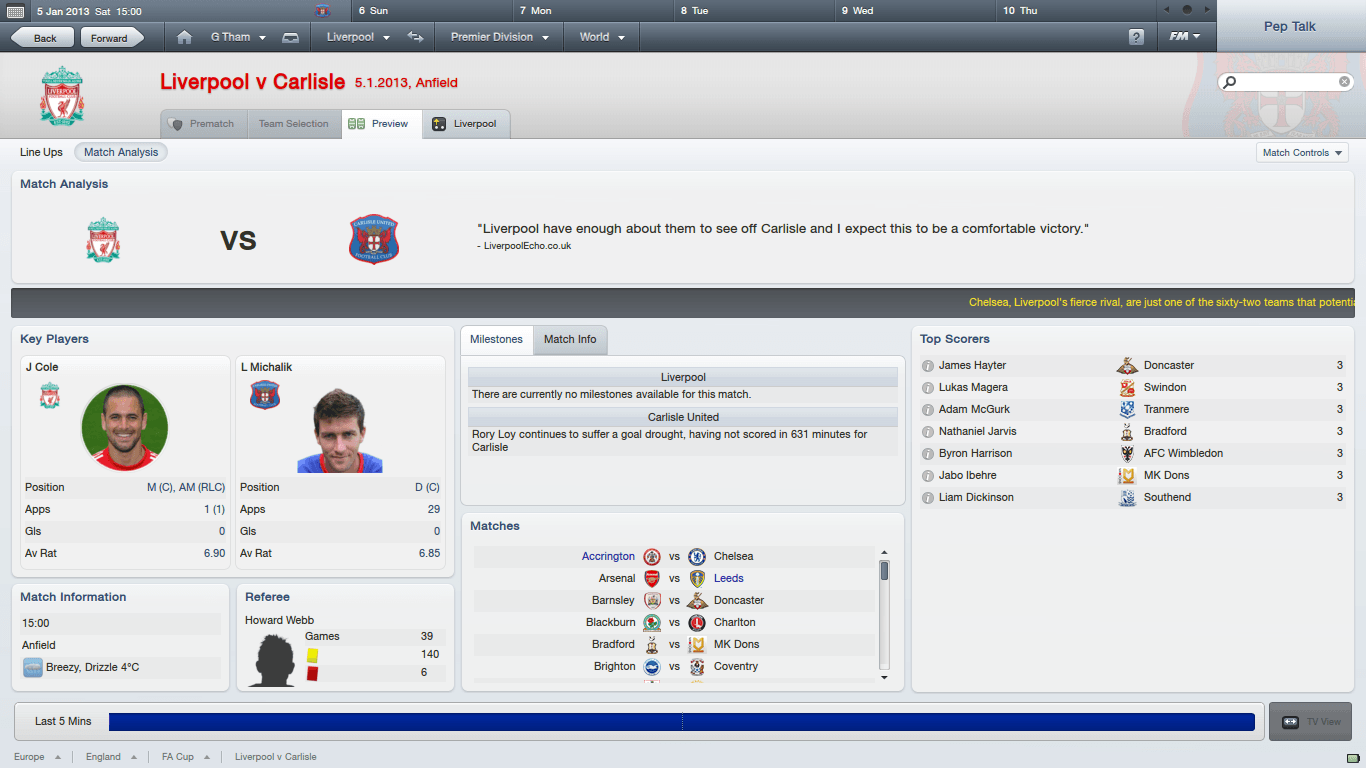 Sorry lads, just had to put this on.
Login to Quote

Glenn T
10 years
We are through to the Fourth Round of the FA Cup after winning 4-0 against Carlisle. Andy Carroll scored two before getting sent off and Jonjo Shelvey scored the third. Carlisle's captain (couldn't remember his name) made it 4-0 with an own goal late in the game. We will now face Bolton in the Fourth Round.

Carlos Fierro has returned from his injury!
Login to Quote 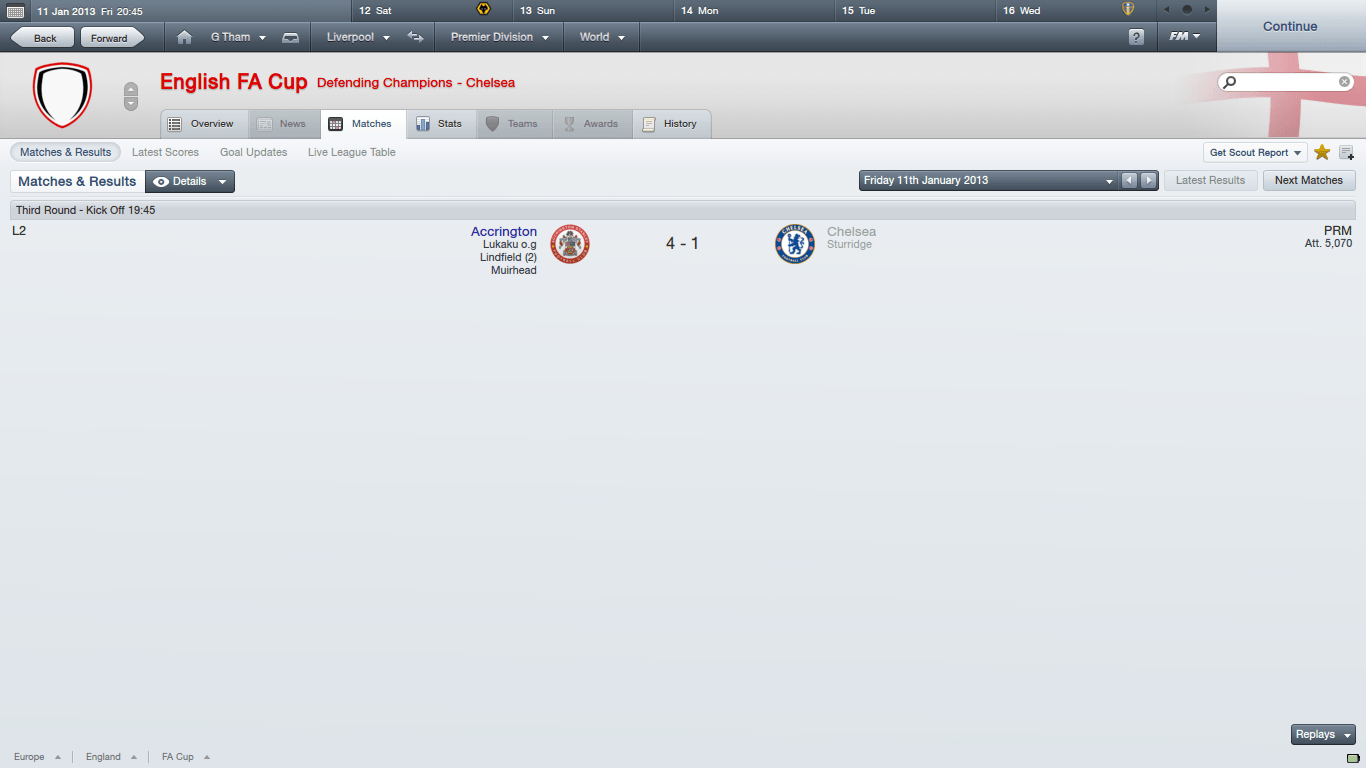 Glenn T
10 years
FEBRUARY
Well, the transfer window has ended and the only transfer business I was involved in, was Martin Skrtel's move from Liverpool to aboard to play for Wolfsburg in the Bundesliga. The board only handed me additional funds to work with in the MIDDLE OF THE TRANSFER WINDOW, and my target was Newcastle's young striker Miles Riley. A 17-year-old hotshot, Riley was loaned out to Scunthorpe amid interest from us and scored his first goal for the club in his first match. I offered Newcastle a 10 million deal that could rise up to 20 million - and Newcastle accepted the offer, but Riley was unwilling to discuss a contract, opting to remain with Newcastle. However much I admire him for not jumping at the chance to move to a bigger club, I will remain interested in him and keep tabs on him unless he changes his mind. Tom McMinigal, a 16-year-old striker from Man City, is also on my shortlist.
Login to Quote

Glenn T
10 years
We have advanced another round in the FA Cup after demolishing Bolton 5-2 with Mexican striker Carlos Fierro scoring a fabulous hat trick, coupled with goals from Suarez and Yaya Sanogo.
Login to Quote

Glenn T
10 years
We have drawn with either Tottenham or Southampton in the FA Cup Fifth Round. Also, I have signed up-and-coming 15-year-old keeper Joe Osei. The lad is German and from Stuttgart in the Bundesliga.

Our next English Premier Division match will be against over-achieving Derby who defeated us in the League Cup Quarter Finals. I have learnt from our previous match and instead of playing a weak starting eleven and resting my key players, I'm not going to underestimate them.
Login to Quote

Glenn T
10 years
I've only recently started using Grid System and Fierro is doing a really good job with it. Seems like he was born for the Grid System - keeps slotting goals in. But when I'm not using the Grid System I normally play him as a poacher, a lone striker with supporting wingers.
Login to Quote 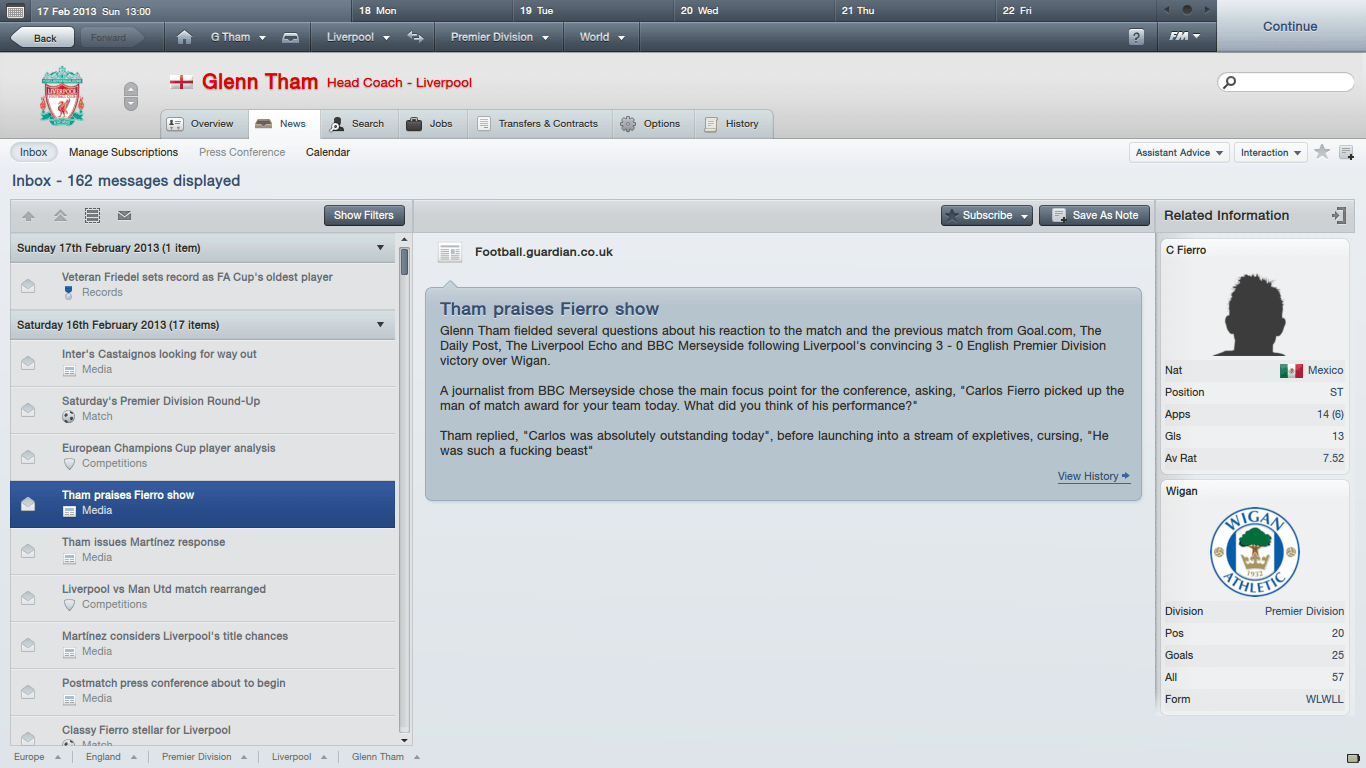 Glenn T
10 years
Well, February has been a pretty good month - the only blemish being the loss to Tottenham. 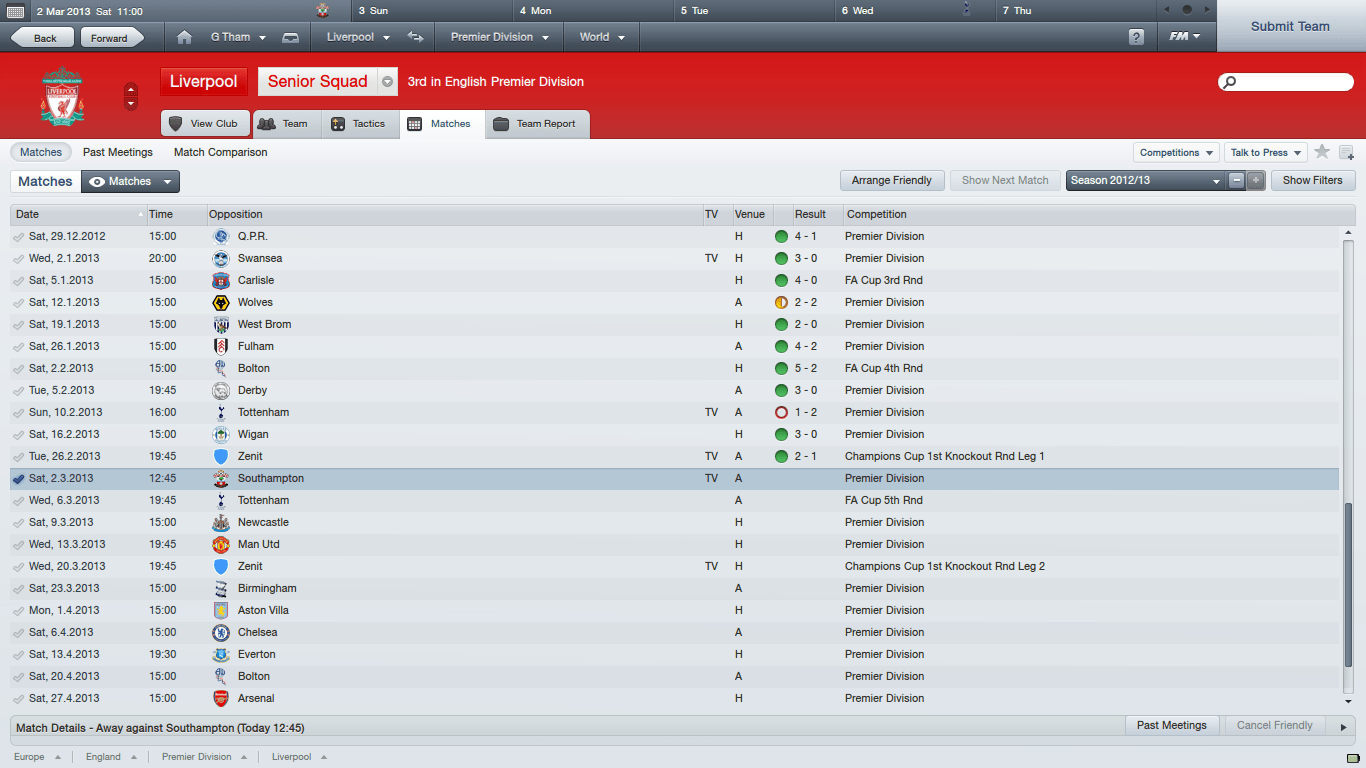 Despite my form, I'm still 3rd in the league table as the two Manchester clubs are going strong at the moment. 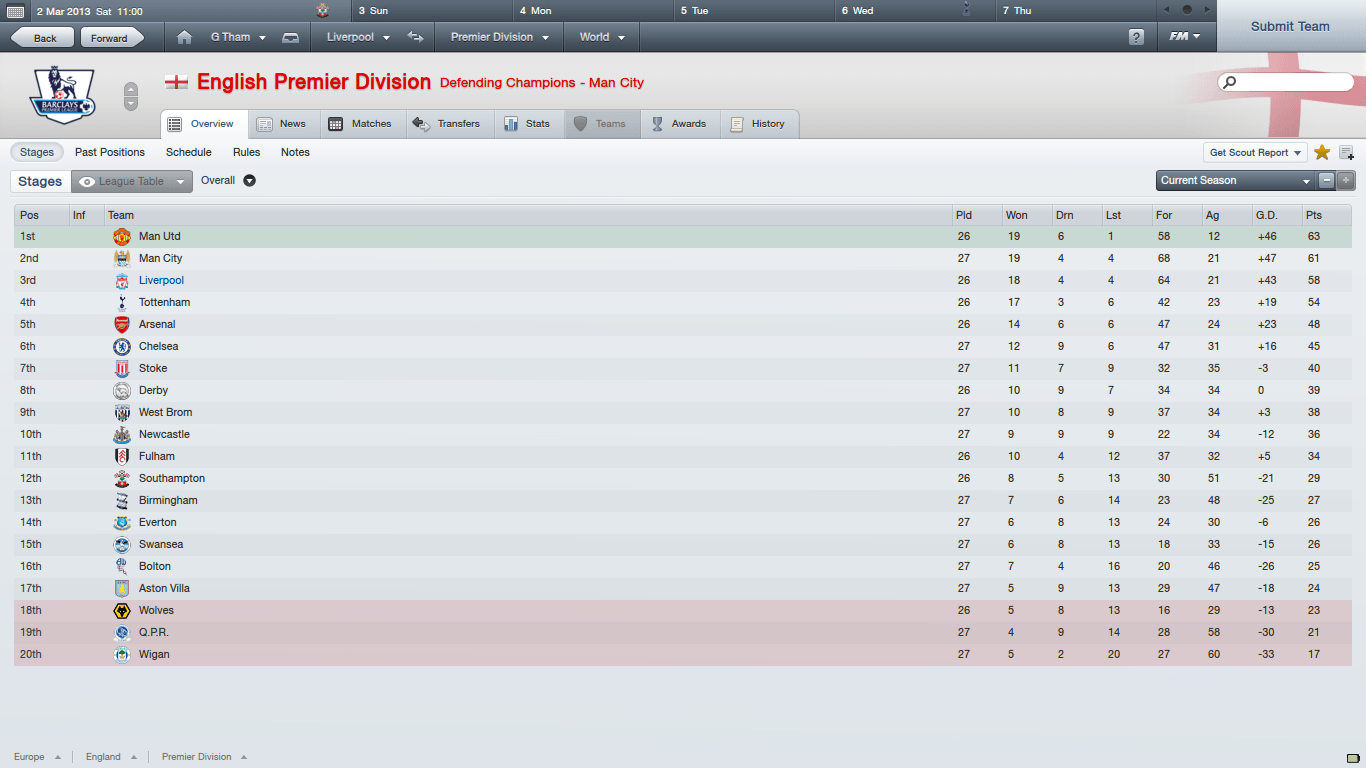 And we triumphed against Zenit in our first Champions' League knockout match. What makes it better is that we won it away! 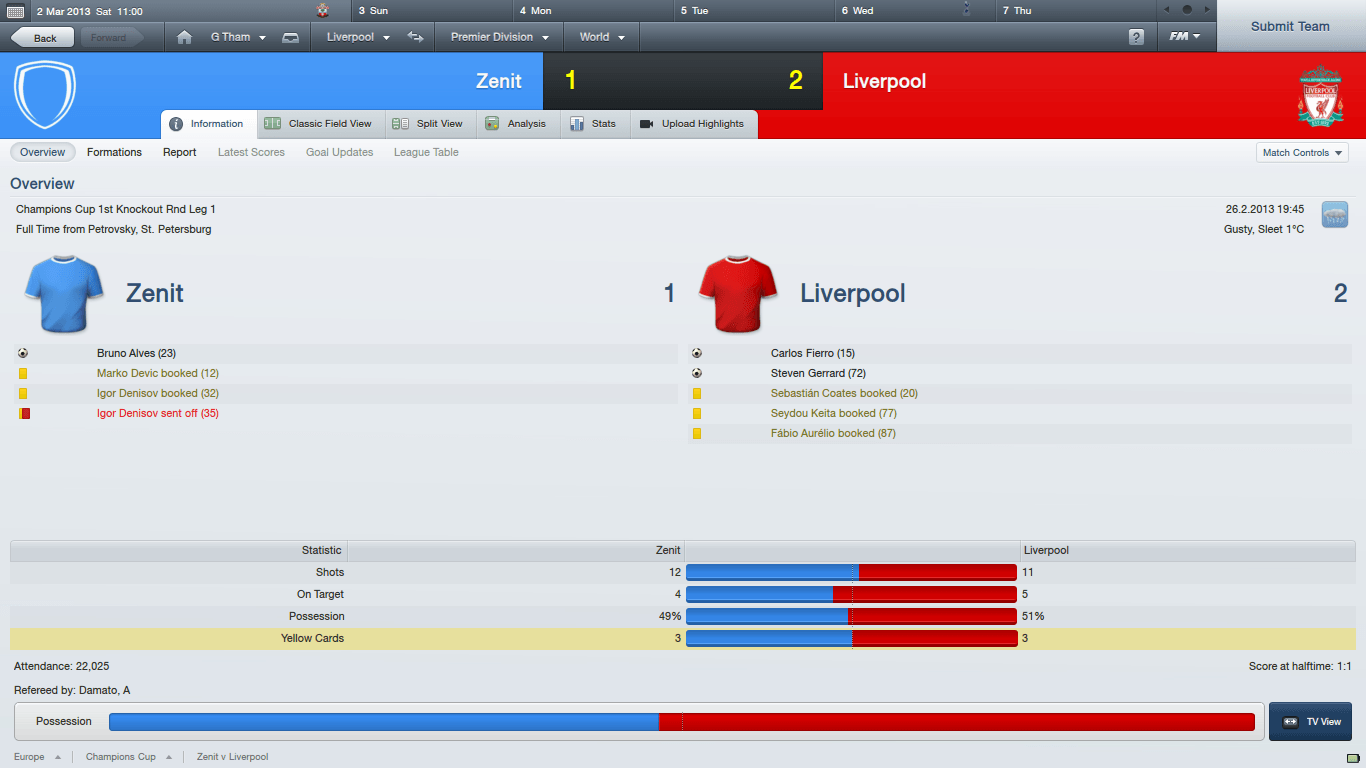 Liverpool are doing really well at the moment and I really want to hand Steven Gerrard a Premier League medal before he retires, and if possible, Jamie Carra as well. However that seems unlikely until NEXT season as it's already March and I'm still languishing in 3rd and the most I can hope for, I think, is a 2nd place finish. Speaking about Carragher, both he and Bellamy have showed no signs that they want to retire - and their contracts both end after this season, so I'm working hard to tie them both down with new one-year deals, but we have hit a snag in contract talks. Carragher's agent wants his client to be assured that he has a place in the first team but I wasn't prepared to give him that assurance as his age makes him more of a backup player. Contract talks with Bellamy also broke down for the very same reason. I think I might have to try again in April or near the end of the season. Bellamy might leave on a free but I will do everything that I can to keep Carra.
Login to Quote

Glenn T
10 years
Joe Osei, the German keeper who will be joining up with us at the start of next season 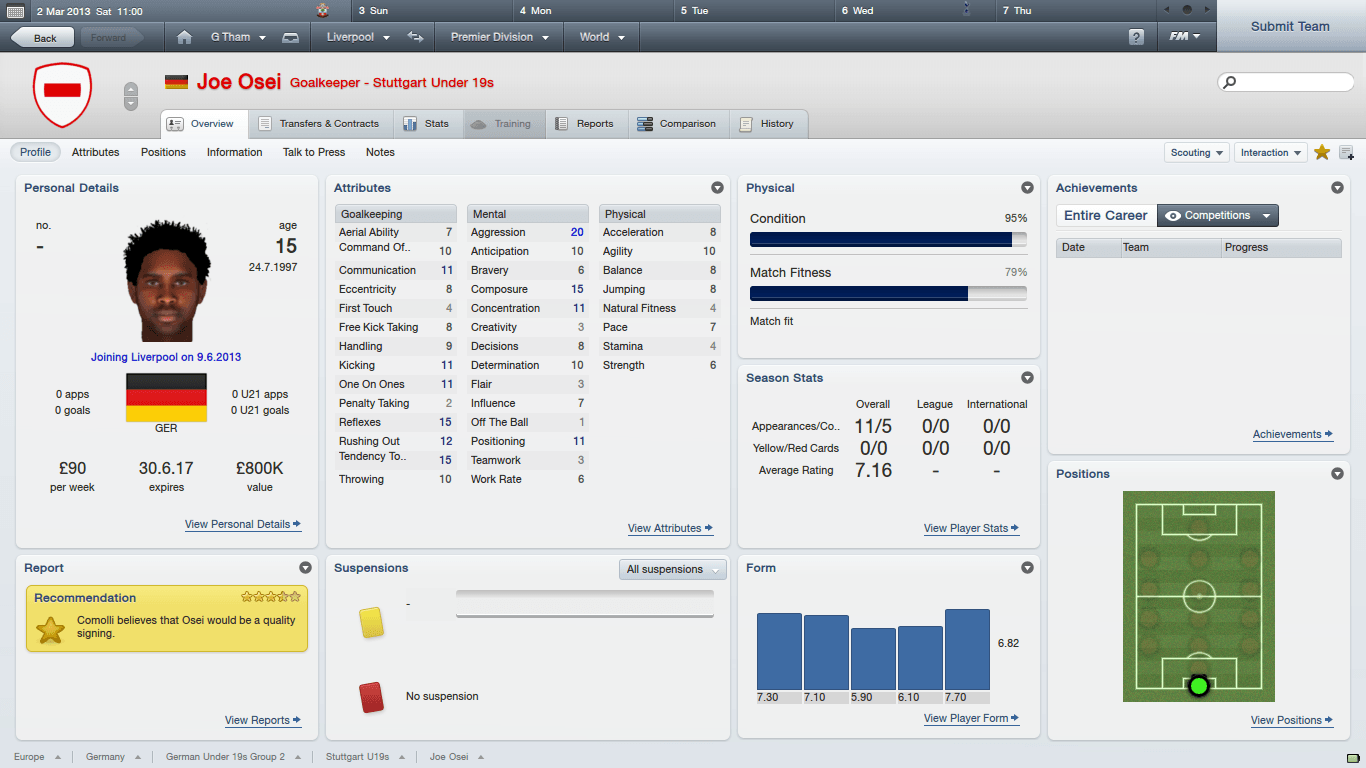