or.dabool
9 years
Liked the Orgryte result, but there is room for improvement in general. Awesome story!

tango602
9 years
Thank you mark and thank you or, I agree there is room for improvement and I am glad you are both enjoying the story

Glenn T
9 years
Come on Bill Grose! I know that feel, I had it with Liverpool before, but then I just kept pushing on and now I'm in 2016, and still managing Liverpool, although my contract expires in the summer and I'm unsure about what to do

Well that's 2014 over, I will still be at Torns next season which will be the 50th year of the club's existence, I am honestly disappointed that we will still be in the 3rd Tier of Swedish Football as I had hoped that in 2015 the club would be in the Superettan which is the 2nd Tier.

Unfortunately we have to once again play Skovde and Kristianstad next season as they were both relegated from Superettan. I don't mind playing Kristianstad too much as I know we can comfortably beat them but I am not looking forward to playing Skovde again.

The last two months of the season were very pleasing as we won 5 of the 8 games in those 2 months, the only teams we could not beat were Landskrona, Karlslund and Limhamn Bunkeflo. Our best win of the five games won was a 2-0 over Ljungskile, we did have a 3-0 win away to Sleipner but the Ljungskile win was one I could enjoy more.

Unfortunately Erik Ronningberg has now left the club to join Skovde in the 2015 season, this is disappointing even though he did not get into the starting 11 very often.

I now look ahead to 2015 wondering if this will be the year we will be promoted to Superettan. Unfortunately I cannot buy any new players as we are already over our wage budget for 2015 but I can work around that.

And now some pictures. 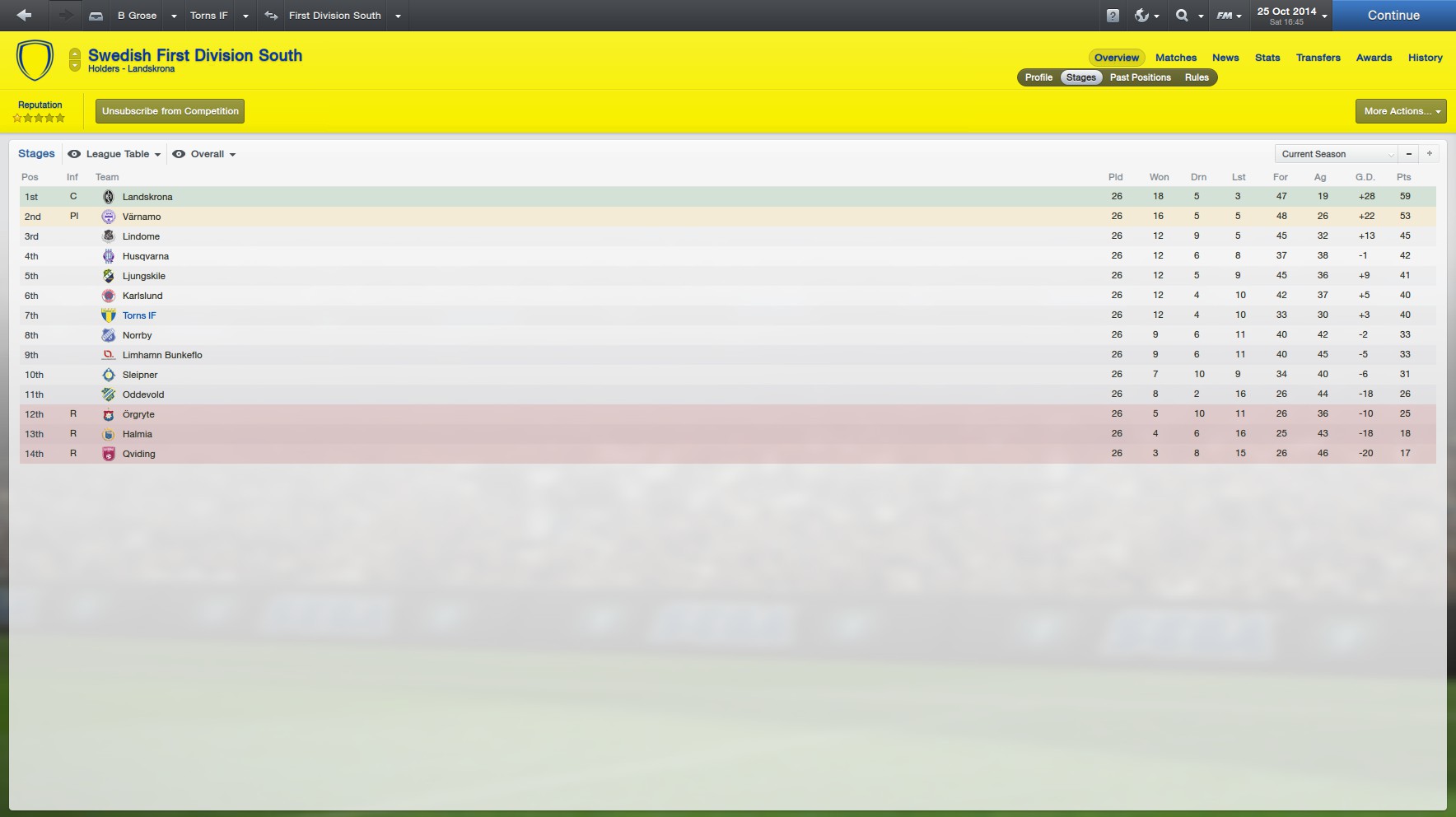 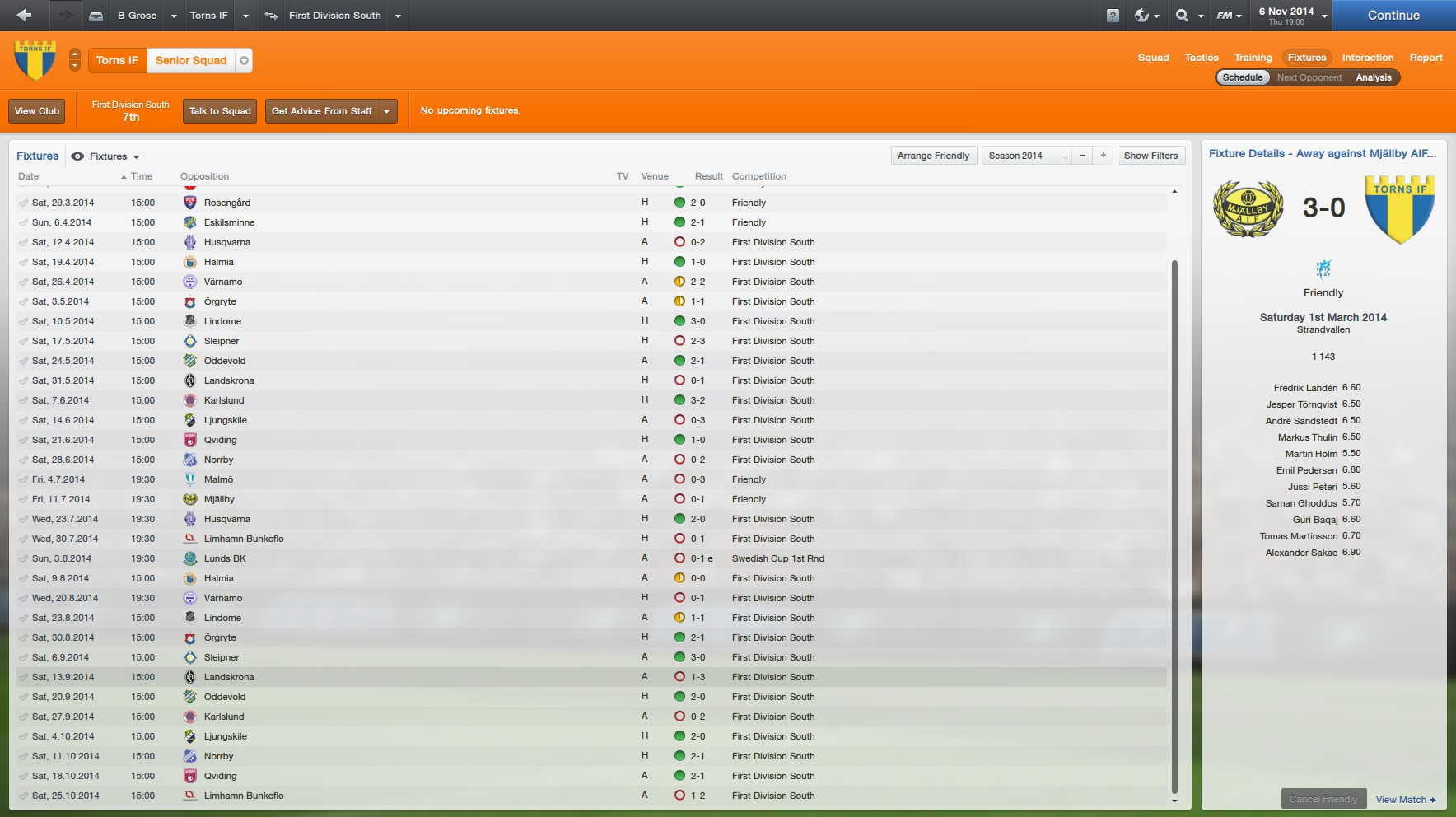 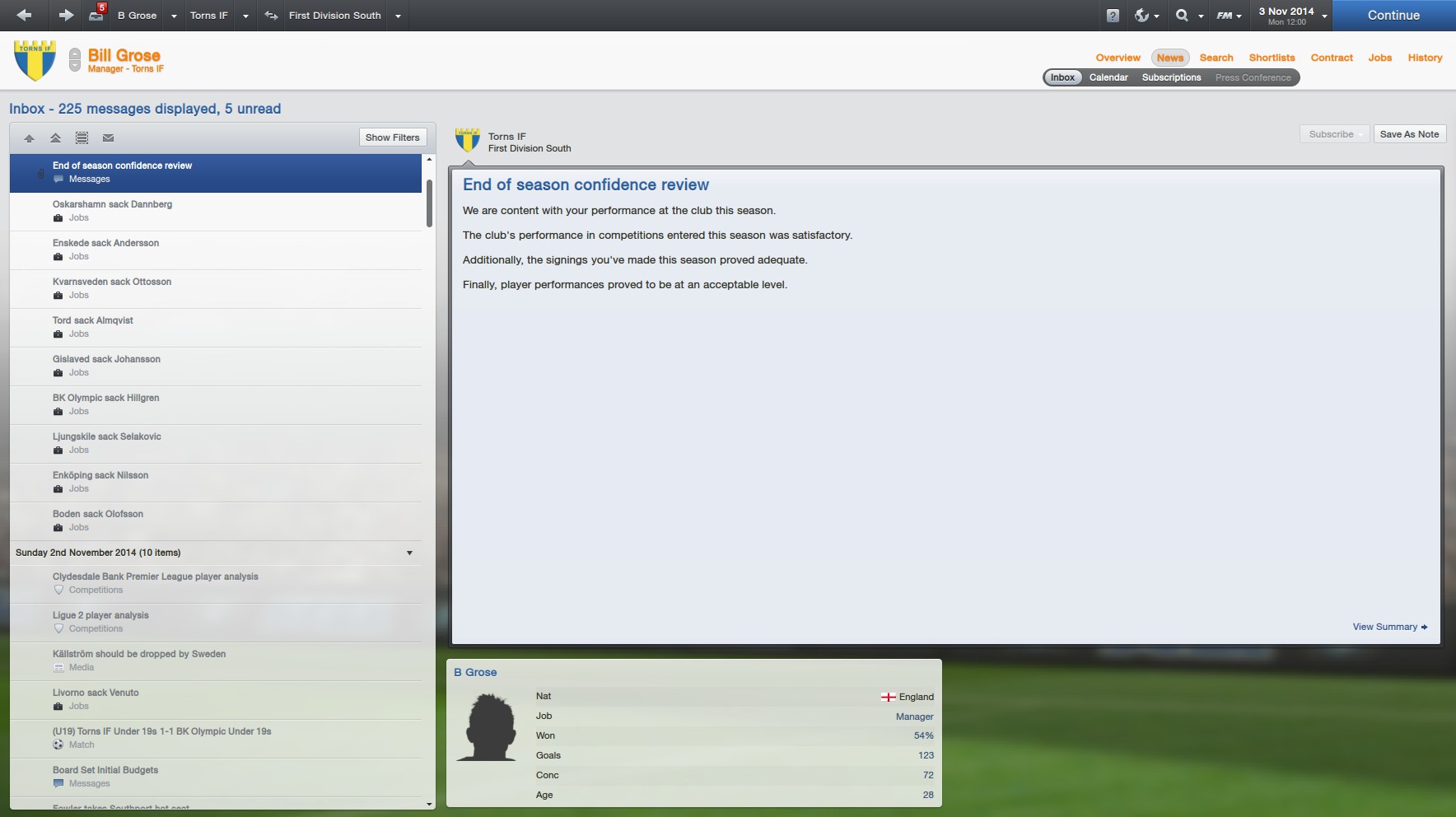 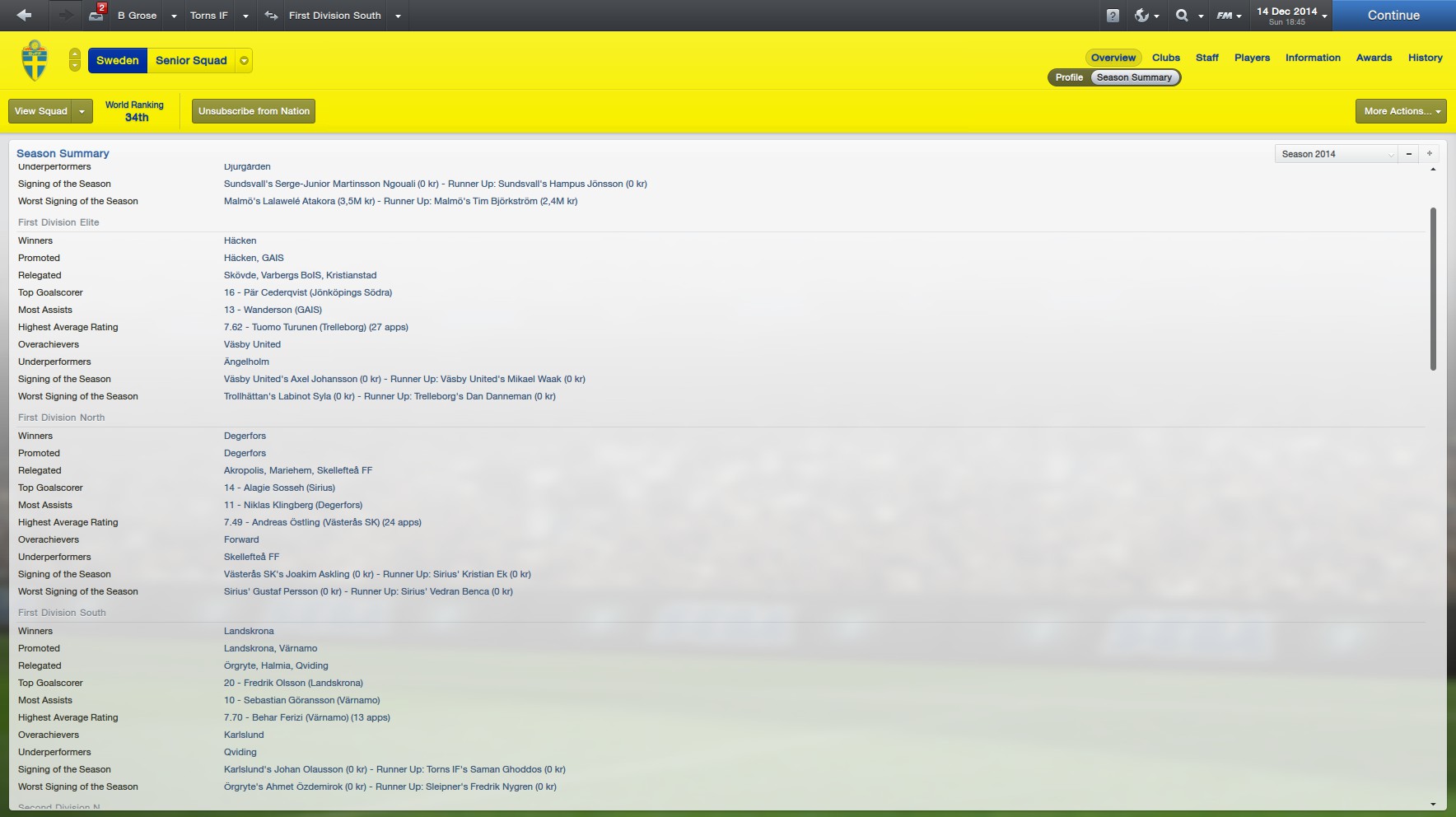 or.dabool
9 years
Good season overall for a side that had 100-1 promotion chance

2nd Rookie
9 years
great story so far mate good and bad results but building on that season is yours next time best of luck.
1
Login to Quote

tango602
9 years
Thanks guys, I asm pretty confident that we can go up this season, the odds are better than last season but not as good as 2013, we just have to wait and see how it goes.

The FM Rookie
9 years
Hey, stay confident. The season just gone showed that you have great consistency over a number of years. You're building quite a footballing empire here and I reckon it will be one to rival Barca in the future

2012-12-06 23:32#71244 The FM Rookie : Hey, stay confident. The season just gone showed that you have great consistency over a number of years. You're building quite a footballing empire here and I reckon it will be one to rival Barca in the future

Thanks Rookie, it would be nice to someday rivel the likes of Barca but my thoughts are on the current season and no further forward at this time.
Login to Quote

bad luck on results there, but hey, every good manager needs to suffer sometime

tango602
9 years
I don't really have anything to say about our 2015 Pre-Season other than it was very successful and was a great build up for our league campaign this year.

Here are the results

Helsingborgs IF 3-1 Torns IF

We kick off our league ccampaign at home to Husqvarna FF which is a game I am quite looking forward to. After this we have an away game against Varbergs BoIS whom we have never face while I have been in charge.

I am now even more confident that this will be the season we go up to Superettan even though our promotion odds are 80-1.

I leave you with a couple of pictures.

Our Pre-Season and League Fixtures for 2015 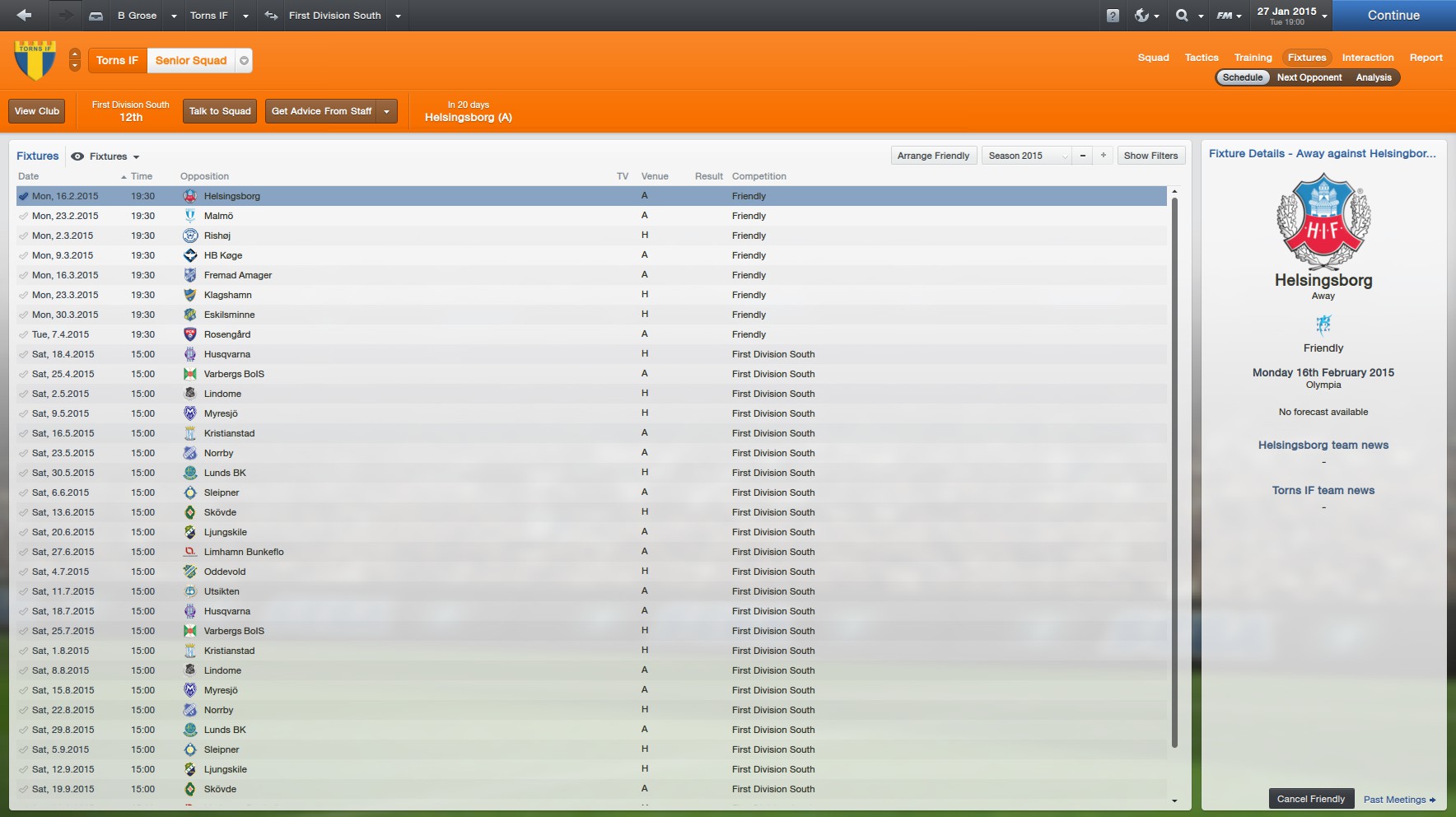 Media Report on the Malmo defeat 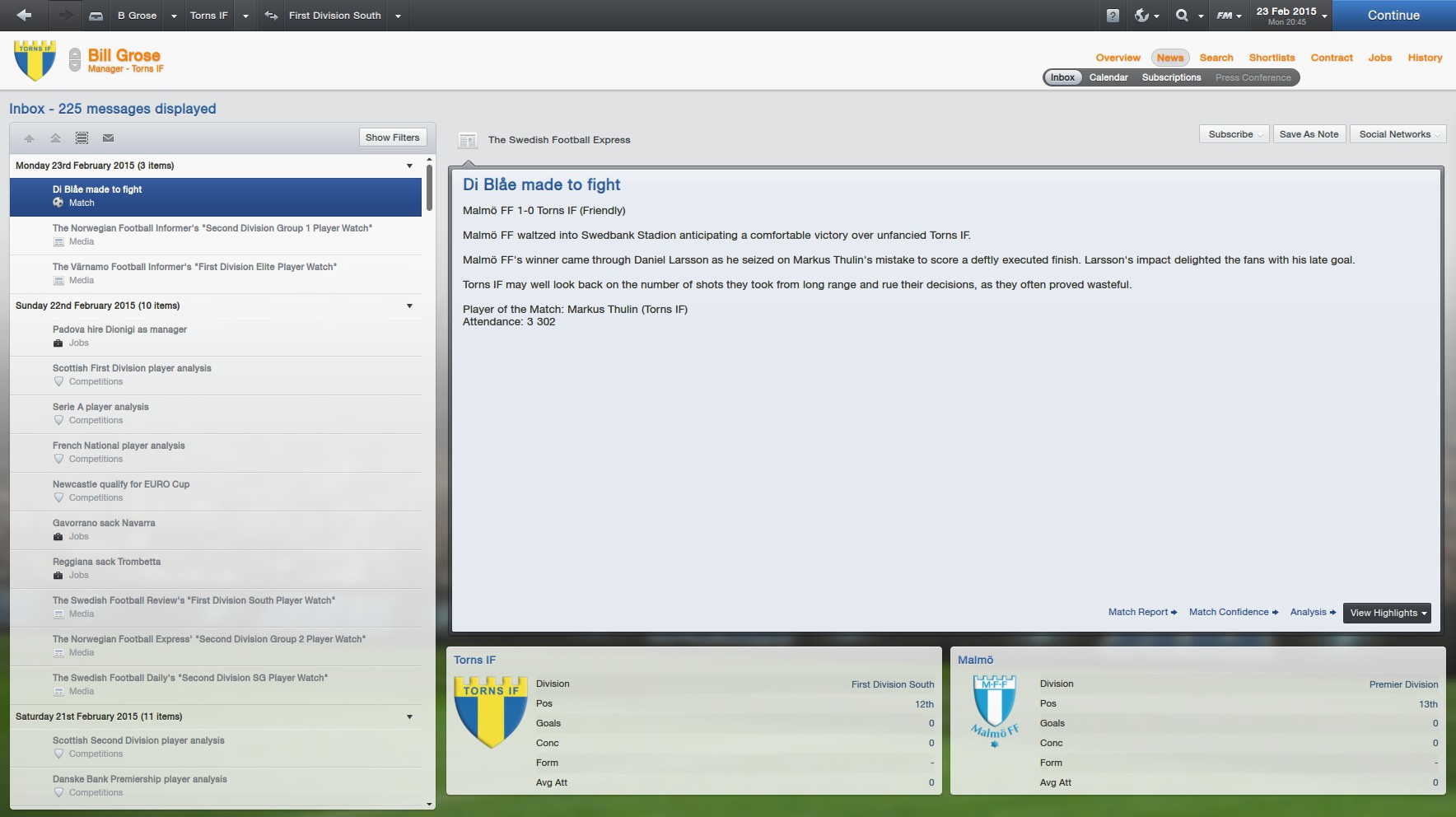 fm general
9 years
Very good pre season, i think your two losses in pre season are probably more encouraging then the wins as they are two very good sides gratz! and good luck for the campaign
1
Login to Quote