tango602
10 years
A new story due to the failure of my laptop's hard drive and hence the unfortunate loss of the Luverdense save.

http://www.svenskalag.se/teamdata/images/5864/40808/logotyp_-_Torns_IF_500.jpg
Torns IF are a Swedish Second Division side and were founded in 1965 and are based in Lund, Torns IF have never won anything in their existence.

Torns IF play at Tornvallen which has a capacity of 4,000.
1

or.dabool
10 years
Nice to see it didn't took you long to come back on your feets after Luverdense! I'm expecting an awesome story

Kiwi
10 years
Very nice little challenge there - if they haven't won anything before, this should be good. Bets of luck!
1
Login to Quote

tango602
10 years
Update after first match in charge of Torns IF.

We faced Swedish First division side Limhamn Bunkeflo 2007 at home in front of a crowd of 54 people and unfortunately could not hold on to a 2-0 lead in the last 10 minutes meaning the match finished 2-2.

There will be a match report next game. I will not say who we are facing or where at this time. 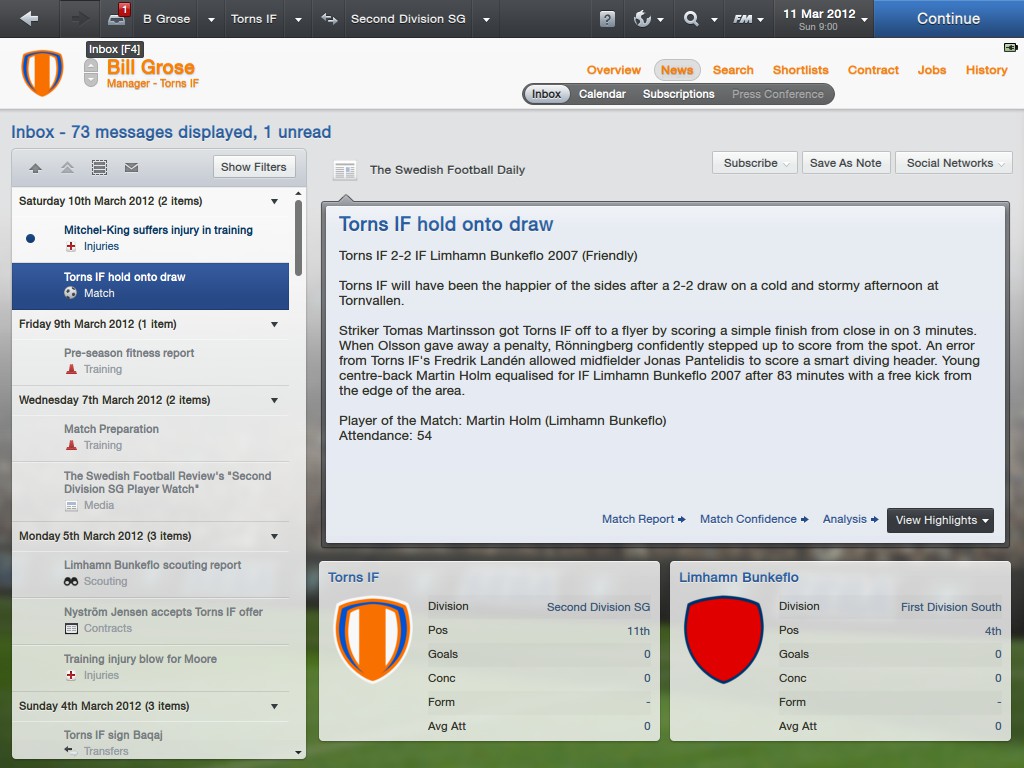 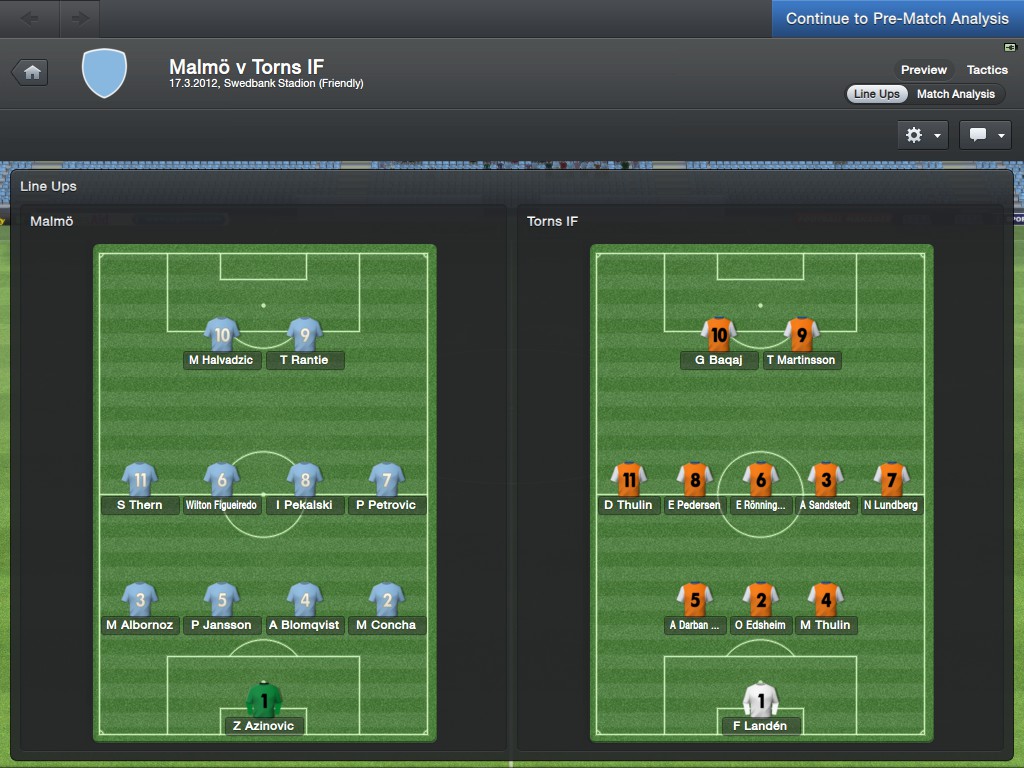 0' Kick Off - Torns IF start the Match

16' Kick Off - Torns IF get the Match back underway

17' GOAL for Torns IF! - Miiko Albornoz intercepts the ball for Malmo FF, Guri Baqaj outpaces Albornoz to win the ball, space opens up for Baqaj, he smashes the ball towards the top corner, GOOOOOOAAAAALLLLL!!! Unbelievable, Torns IF have drawn level!

18' Kick Off Malmo FF get the game going again

20' Petrovic swings the ball in towards the near post for Malmo FF, Markus Thulin heads it away for Torns IF but it is received by Wilton Figueiredo who unleashes a volley at goal which is parried away by Landén

21' Ivo Pakalski lays it wide to Matías Concha on the right, Concha crosses into the far post, Halvadzic heads it but it skims the top of the bar and goes out of play.

25' Guri Baqaj gets free of the last defender and shoots, Azinovic pushes it away and Petrovic puts it behind for a corner to Torns IF

29' After a long series of passes, Baqaj has a shot a goal but Azinovic deflects it away

35' After another long series of passes, Torns IF get the ball to Emil Pederson who has a shot from 25 yards out, Azinovic beats the ball away, Baqaj pounces on the rebound and scores but its disallowed.

37' Oskar Edsheim of Torns IF is injured and has to be substituted, his replacement is Viktor Edsheim

40' Lundberg intercepts for Malmo FF and heads the ball to Pekalski, Pekalski passes to Wilton Figueiredo who aims for the top corner but blasts the ball over the bar

45+2' The referee blows for Half Time after Wilton Figueiredo's shot goes over the bar.

HT' Malmo FF take off Havaldzic and Petrovic, bringing on Nazari and Friberg in their place

60' After a good string of passes, Nazari has a shot on the half volley for Malmo FF but its flies over the bar

64' Friberg swings the ball into the box from a corner for Malmo FF, Nilsson heads towards goal but the ball hits the post and goes out of play

65' - GOAL for Malmo FF! Wilton Figueiredo passes left to the feet of Alex Nilsson, Nilsson passes it out right to Thern, Thern crosses into the box, Friberg heads across the goal and its in! 2-1 to Malmo FF here at Swedbank Stadion.

67' Torns IF get the 2nd half back underway, can they draw level again?

74' After a series of passes initiated by Malmo FF's goalkeeper Robin Olsen, Thern lets fly on the half volley but it is saved and held by Landén

82' After a Torns IF goal kick, Friberg gets the ball for Malmo FF and plays the ball to Rexhepi who shoots but hits the post.

90+4' The Referee blows for full time, it has finished Malmo FF 2-1 Torns IF here at Swedbank Stadion

The overall attendance was 2,692
Login to Quote

or.dabool
10 years
Sorry about the loss, but the match report was awesome. Good luck

Atreidas
10 years
Great results! Enjoying the story :), hopefully you can recover from the memory loss, because this was one of my favorite ever stories! Keep up the great work, Tango <3
Login to Quote

tango602
10 years • Edited
A brief summary of the events tragically lost due to a very unfortunate server failure. Many thanks to stam for getting FMScout back up and running as soon as possible, we all appreciate it.

2012 was my first season with Torns IF and we won the Second Division Sodra Gotaland that year with 4 games to go of the season, this was the club's first ever trophy in its 47 year existence. The club's reputation also increased from Local to Regional after this.

Unfortunately we were not in the Svenska Cupen that year which was won by Malmo FF. We were the league's overachieving team and several of our players won awards, I also won 2 manager of the month awards that season.

The 2013 Pre-Season was very eventful mainly due to my car accident while on my way to play a round of golf at the local golf course, this resulted in my assistant manager taking over for the last 3 matches of pre-season.

The results in Pre-Season were mixed with a roughly equal amount of wins and losses as we prepared for the club's first ever season in the 3rd tier.

We are nearly halfway through the 2013 season now and we are 6th in the First Division Sodra which is slightly better than I was hoping for. We are currently on a 3 game unbeaten run ahead of our game ahead of a visit to 2nd placed Varnamo but unfortunately have several injuries right now which is making things a bit tougher. Our Under 19's side have just reached the 4th Round of the Under 19's cup and I wish them the best of luck. 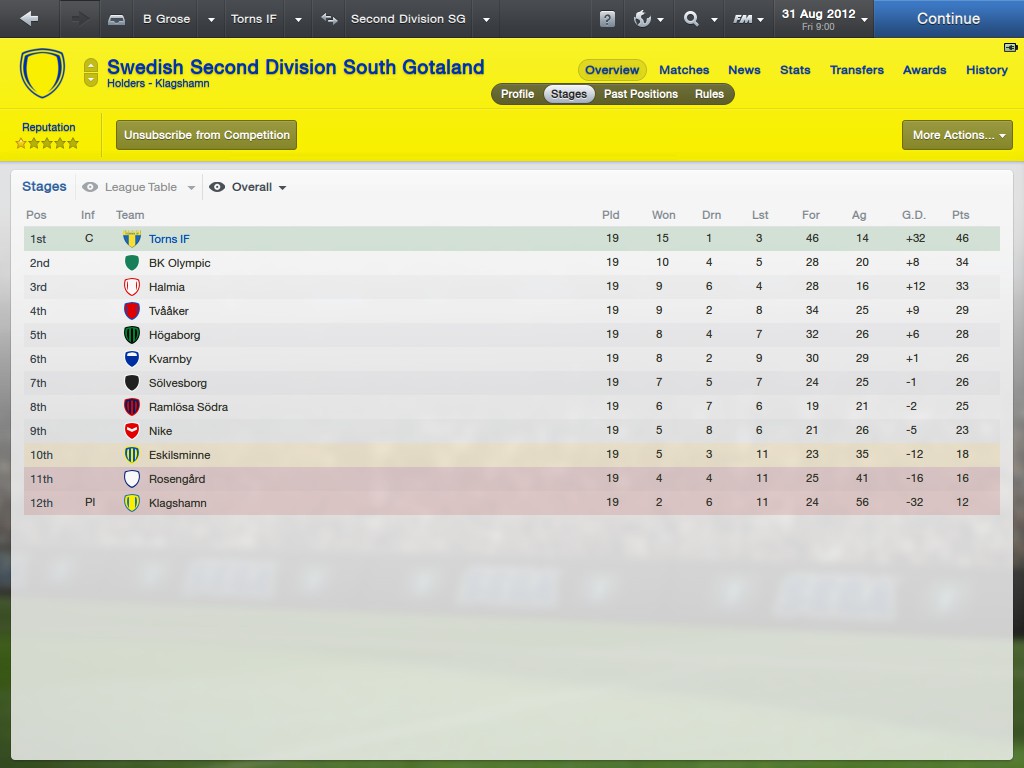 Media Report on our League win in the 2012 season 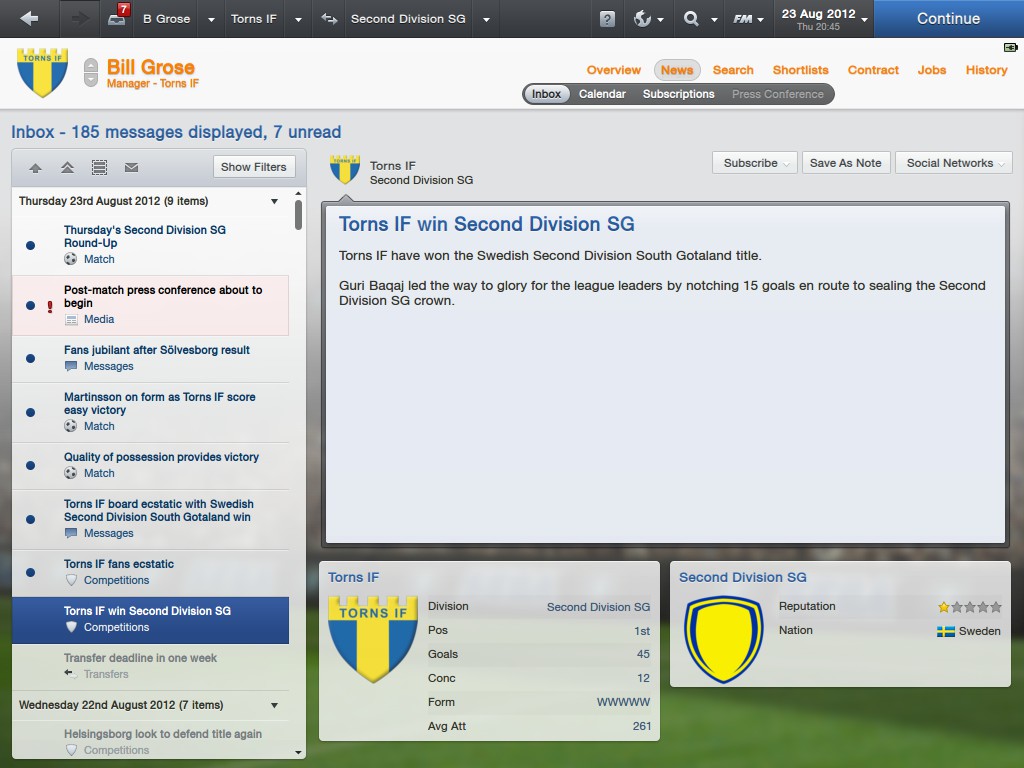 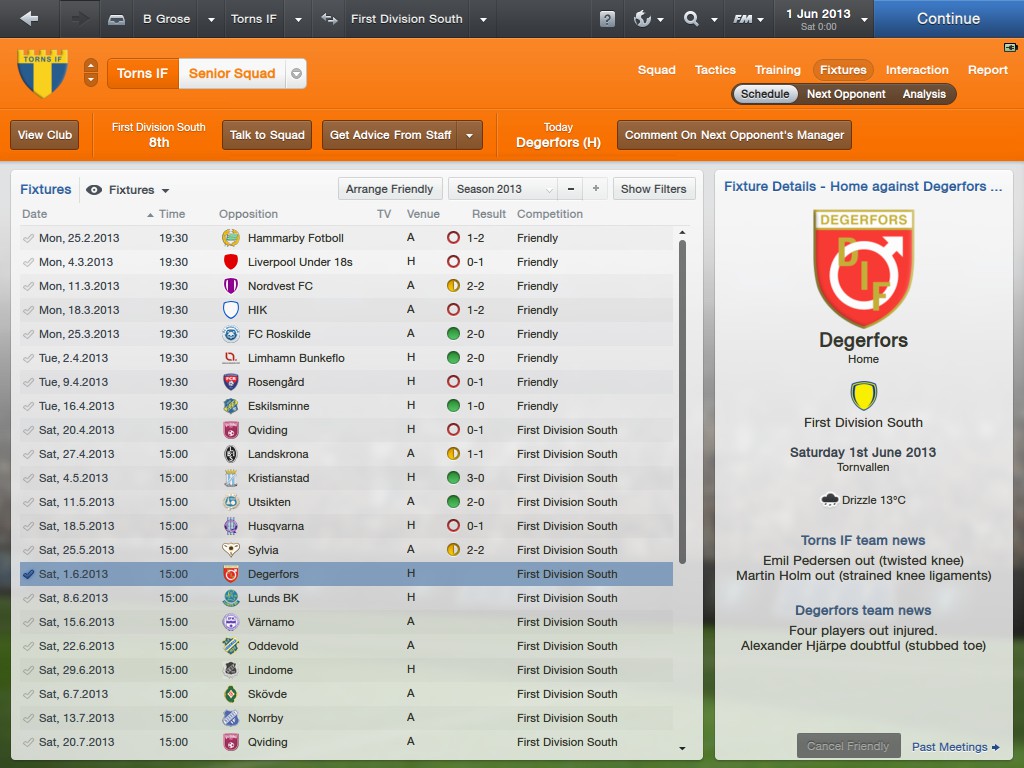 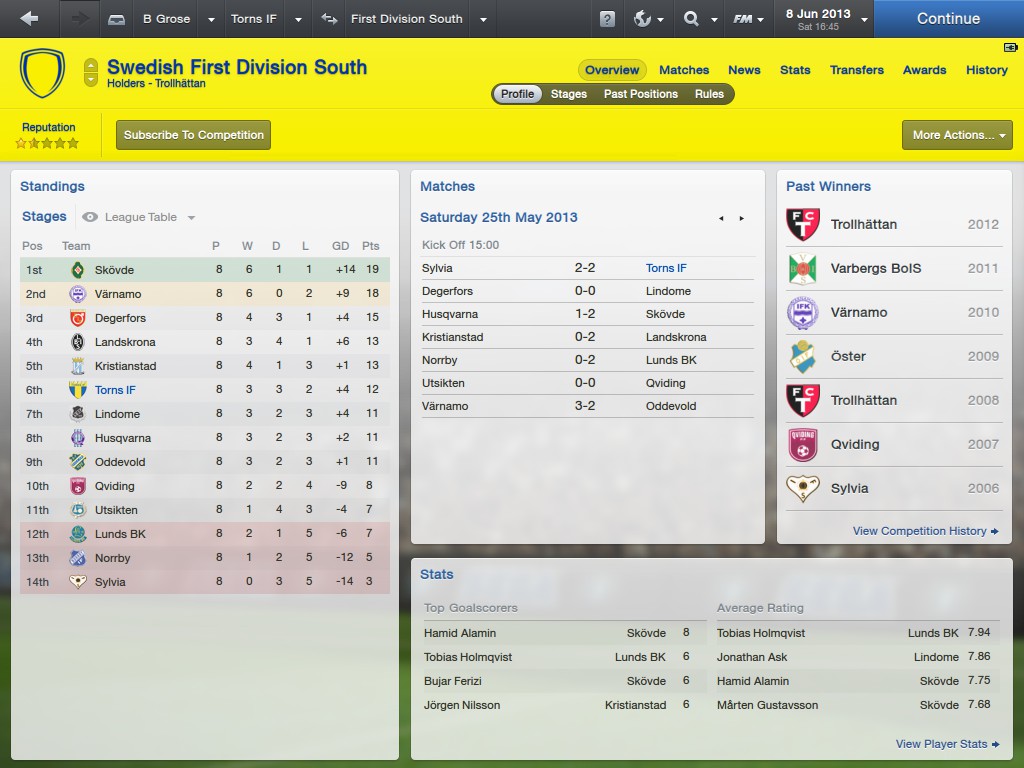 Kiwi
10 years
Keep it going Tango.....you do have some great results there!!!
1
Login to Quote

Glenn T
10 years
Brilliant Tango, great to see you back.
1
Login to Quote