Not just ripping it apart but once again defying the odds

The first thimg I have to say is that We Are The Champions!

We won the First Division Sodra title with two games left of the season after an infuriating 2-0 loss at home to Limhamn Bunkeflo 2007. I was furious after the loss but at the time I did not know we had won the title.

Winning it this year was made even more special by the fact that it was the 50th year of the club's existence.

September was the penultimate month of the 2015 season and brought 3 home matches as well as 1 away fixture, in our first 2 home matches we lost 3-1 to Sleipner and defeated Ljungskile 1-0 to keep ourselves in top spot in the league ahead of our trip to 2nd placed Skovde, we had never defeated Skovde at this point and I was anxious to beat them to ensure that we were likely to win the title.

It was a very tough match be we came out of it 1-0 winners which meant that if we won our last match of September at home to Limhamn Bunkeflo 2007 we would be champions and be playing in Superettan next season. Unfortunately we lost 2-0 which left me fuming at the team and they soon knew about it, however my fury soon turned to joy as we had won the league due to Skovde failing to win their match. I had my contract renewed for another year following this match.

With the title won all we had to do was play our two matches in October to finish the season, the first of these games was a 2-0 home win against Utsiken, this was followed by our joint best result ever, a 7-1 away win against relegated Oddevold, I was incredibly pleased with this result.

And so we look forward to 2016 and playing our football in Superettan.

now take the first season to get used to your new league and then the following time itll be yours for the taking ;D
1
Login to Quote

tango602
9 years
In an effort to try and catch my story up to where my game is, here are the 2016 Pre-Season Results

We had some very good and encouraging results this pre-season including a remarkable 1-1 draw away to Helsingborgs IF and no losses on this year's Tour of Denmark.

Helsingborgs IF 1-1 Torns IF

We will start our league campaign at home to Assyriska on the 21st of March, this is followed by an away game against BK Hacken. 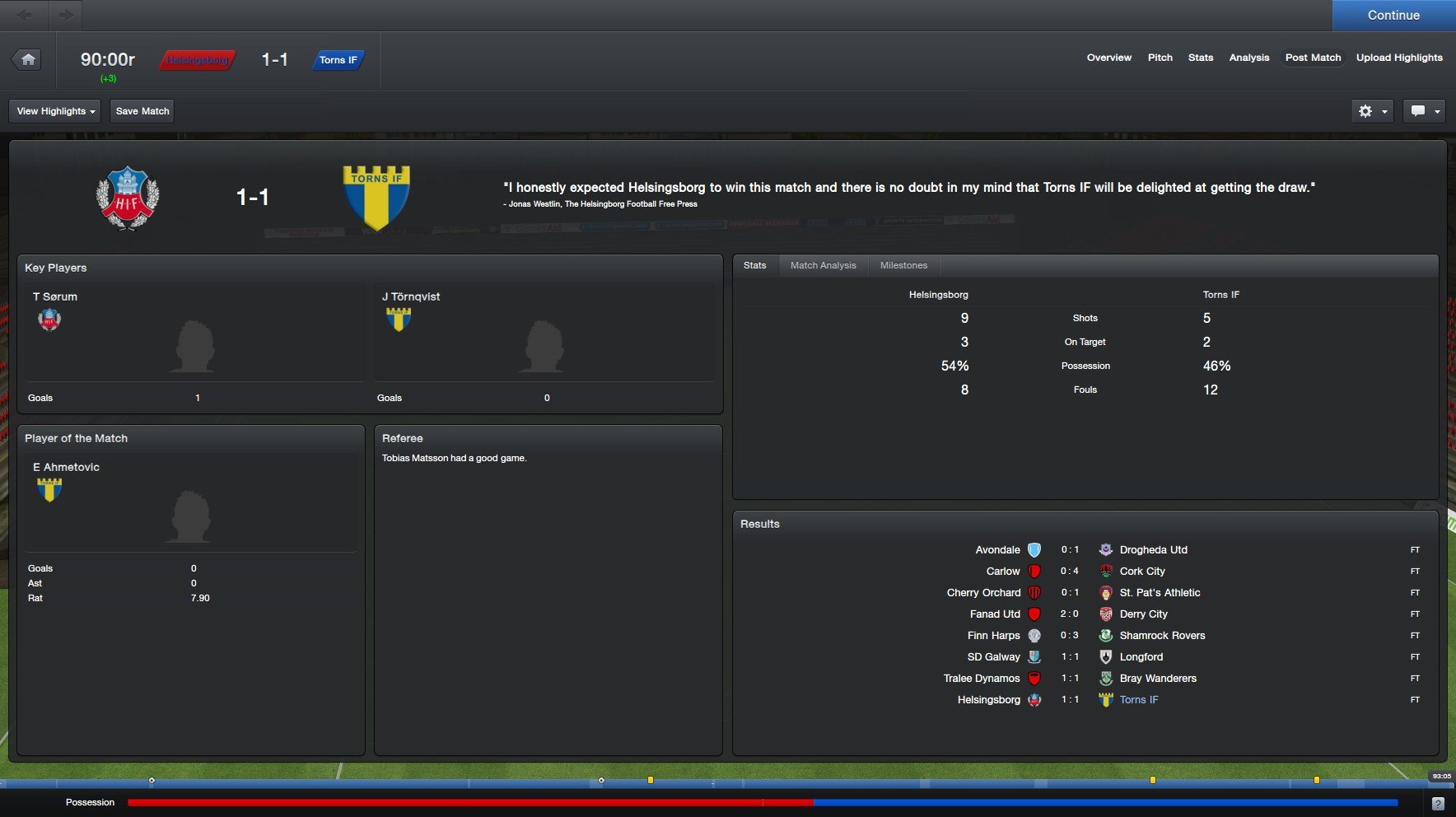 Media Report on the Helsingborgs Game 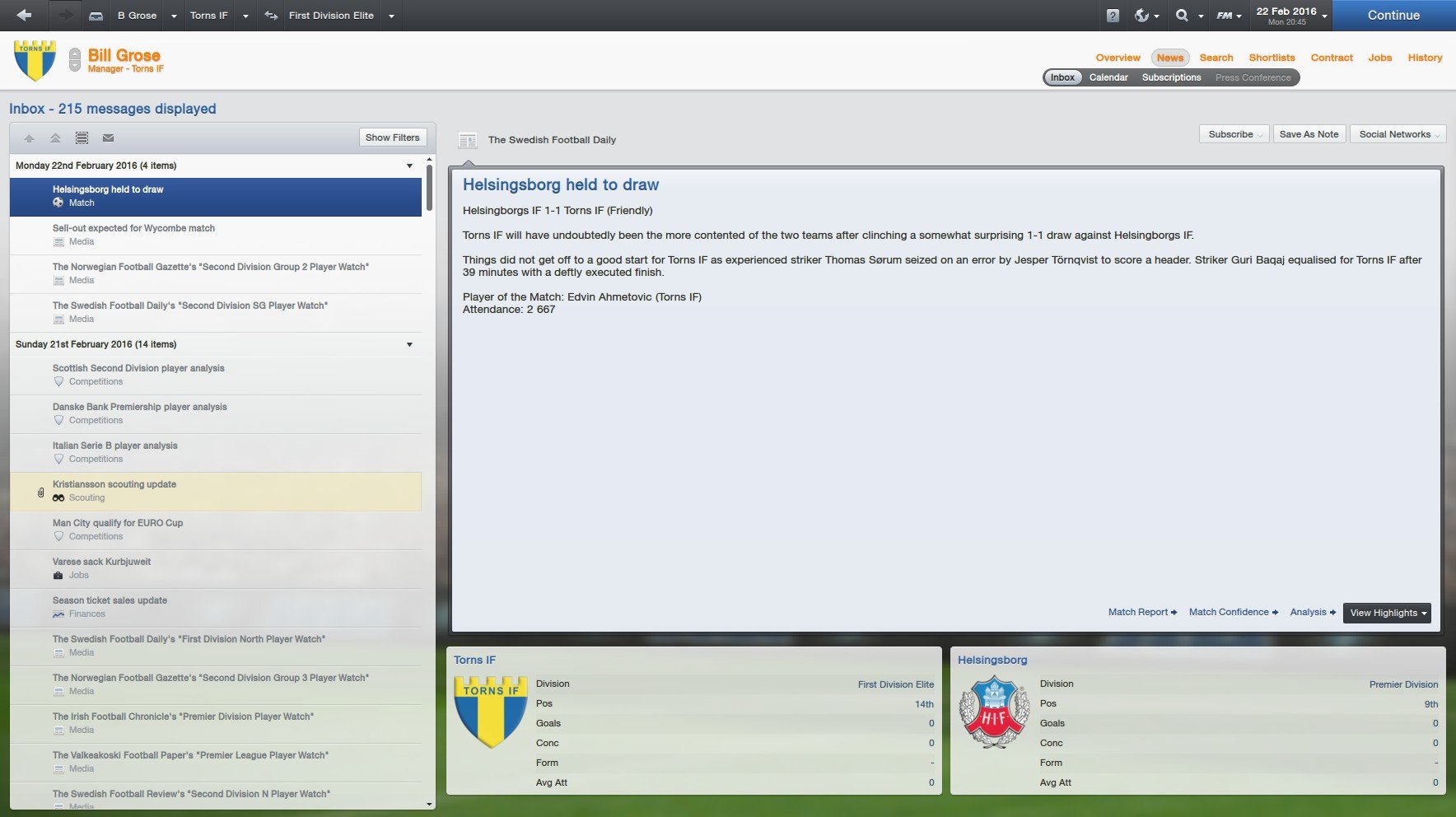 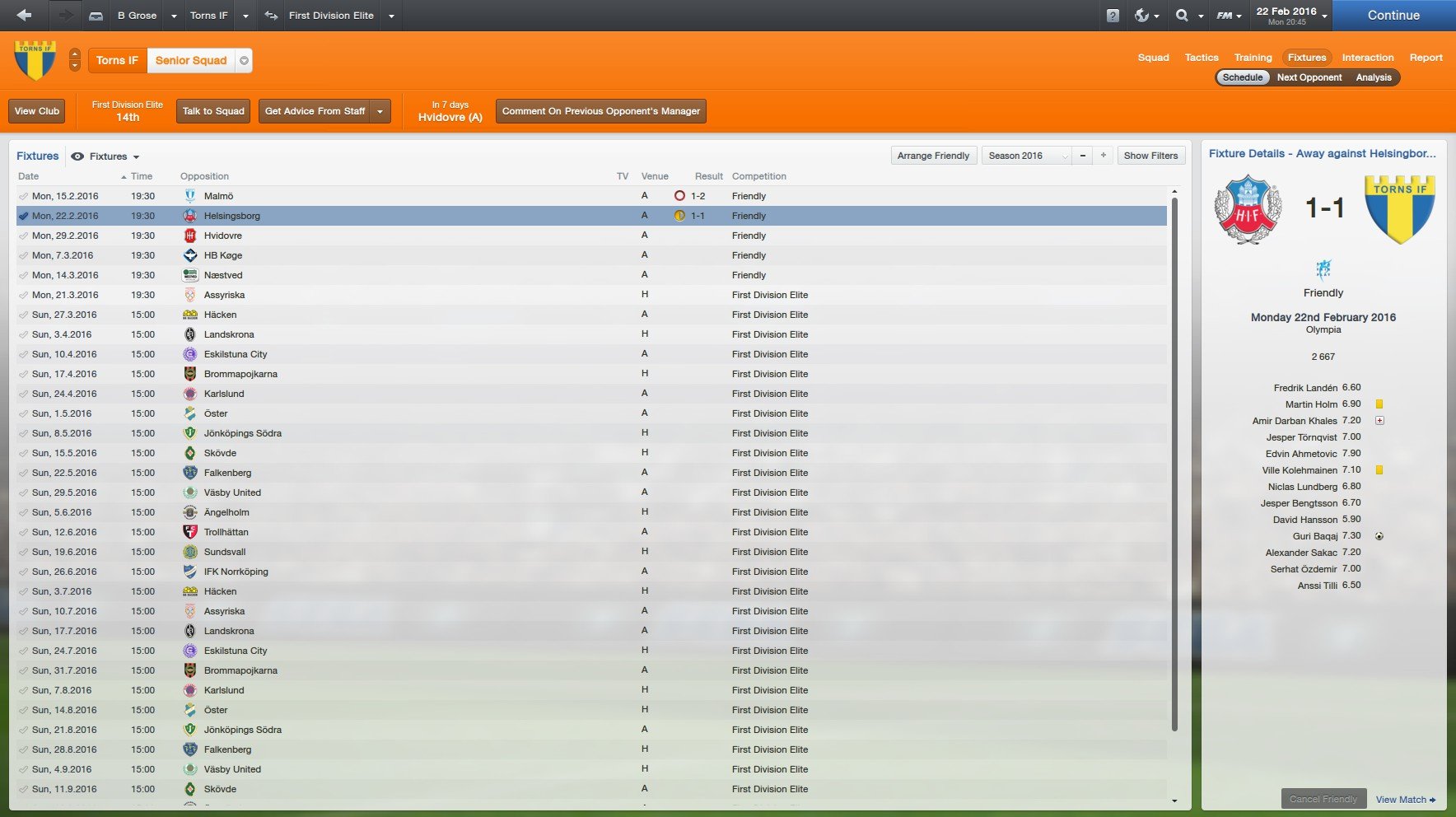 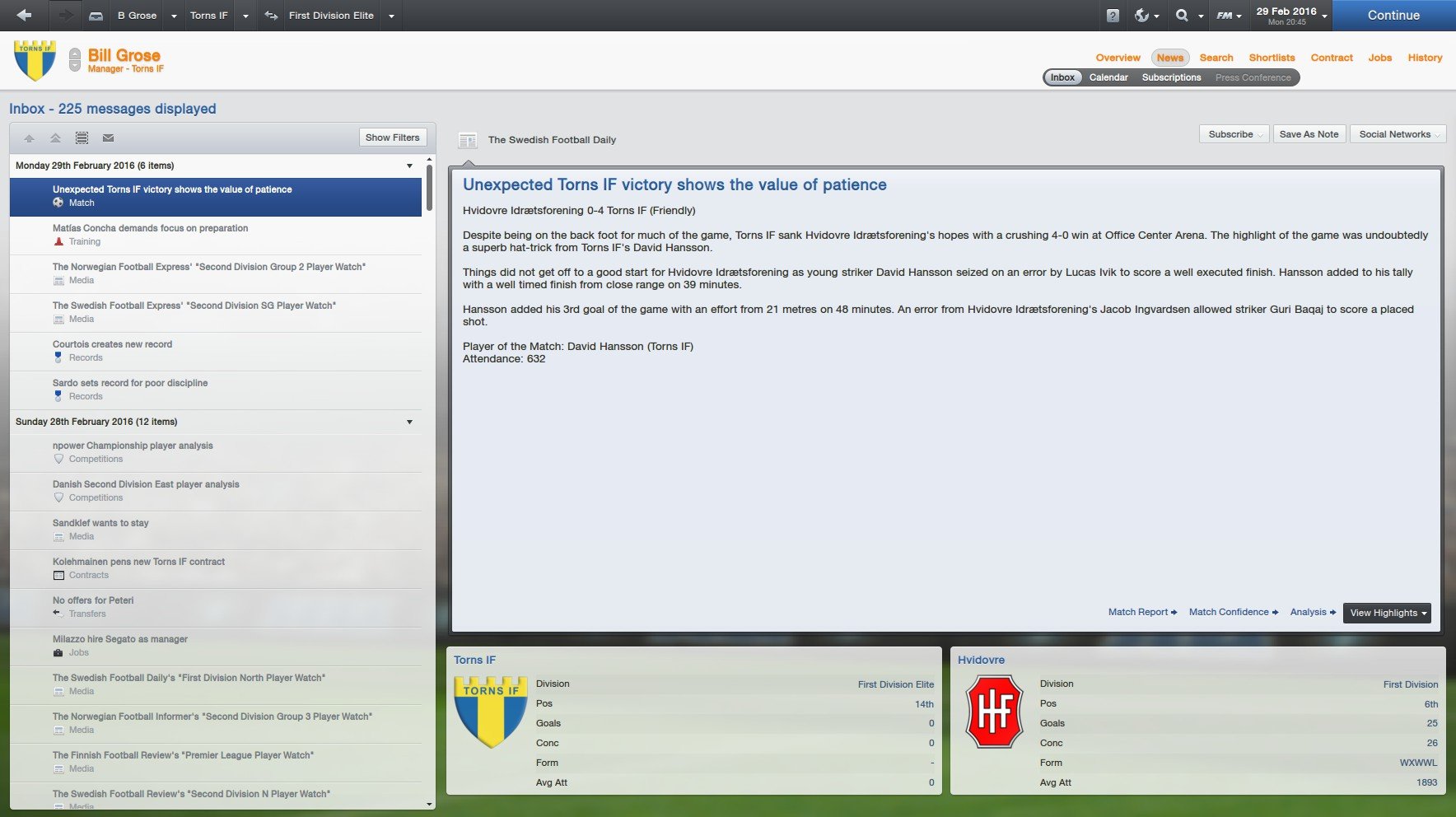 The FM Rookie
9 years
Good luck with the upcoming season!

andrew98
9 years
A new season, a new adventure, good luck in your adventure

tango602
9 years
Still catching the story up, here is the March and April 2016 Update.

March is now when our season starts and we only had two matches that month which were our league opener at hom to Assyriska and an away game with BK Hacken who have been in the Allsvenskan many times and won Superettan back in 2013.

We had a very tough time at home to Assyriska and barely scraped a 1-1 draw in the 90th minute thanks to a goal from Niclas Lundberg. This left us 8th in the league but unfortunately we would not stay there for very long due to a crushing 3-0 loss when we travelled to Goteborg to play BK Hacken.

This was a clear indication of how April would turn out as we had home games with Landskrona and Brommapojkarna as well as away fixtures against Eskilstuna City and Karlslund.

The first of these matches was the home game with Landskrona BoIS whom we had last faced back in First Division Sodra in 2014, however this game would finish as a goal-less draw to leave us 15th in the league. After the Landskrona game we travelled to Tunavallen where we played Eskilstuna City and once again barely scraped a draw thanks to 88th and 90th minute goals from Guri Baqaj which moved us up to 13th in the table.

We then had Brommapojkarna come to visit for the home fixture against them in which we lost 3-0, I was furious and let the team know it as this result had put us back down to 15th in the league. We were even called hapless follwoing this result.

This was followed by our last game of the month which was a trip to play Karlslund which resulted in another defeat, losing 2-0 and meaning we were six games without a win.

I don't really have any pictures for this update so I leave you with another song.

or.dabool
9 years
Ouch, six games without a win.. but you will bounce back! Torns IF ftw!
Login to Quote

Blue
9 years
Very nice, unlucky with the no wins, but you'll come back.
Login to Quote

The FM Rookie
9 years
This is a true test of your abilities, can you bounce back or will you crumble? I'm hoping for the former

We have had a terrible start to our first season in Superettan and as a result we were lying in 15th place going into the first game of May away to Oster, we still had not got a win at this point meaning I really wanted to beat Oster and prevent the club from dropping down to the bottom of the league, thankfully we won 3-1 which was outstanding thanks to two goals from Guri Baqaj and a goal from David Hansson.

Following the first win of the season against Oster, we drew 0-0 at home to Jonkopings Sodrs and this was unfortunately followed by a 1-0 loss at home to Skovde and another 1-0 loss away to Falkenberg.

After this we only had one game left to play in May and that was a 782 mile round trip to play Vasby United, I felt that we might be able to win this match and move up from 14th in the league. We scraped a 1-0 win from this match to move up one place to 13th in Superettan thanks to a 23rd minute goal from Alexander Sakac.

We then had June's fixtures which were at home to Angelholm, away to Trollhattan, at home again to play GIF Sundsvall and then to finish off a June a trip to Norrkoping.

We fought very hard in the Angelholm match but unfortunately came out of it having lost 2-1 in the 90th minute which was slightly disappointing. The scorer for us was Anssi Tilli who drew things level at 1-1 in the 80th minute, it seemed like we would be getting a 1-1 draw after that but it was not to be due to the aforementioned 90th minute winner for Angelholm by Niklas Andersen.

This was followed by us surprisingly winning the remaining three matches of June against Trollhattan, GIF Sundsvall and IFK Norrkoping. All of these three wins were a 2-0 victory and all were very surprising and pleasing, especially as the Trollhattan and Norrkoping matches were away games. These three wins also kept us 13th in the league and only a point behind 12th placed Eskilstuna City.

Hopefully it will be start of the turnaround this season.

And now I leave you with some pictures.

Media Report on the Oster Game 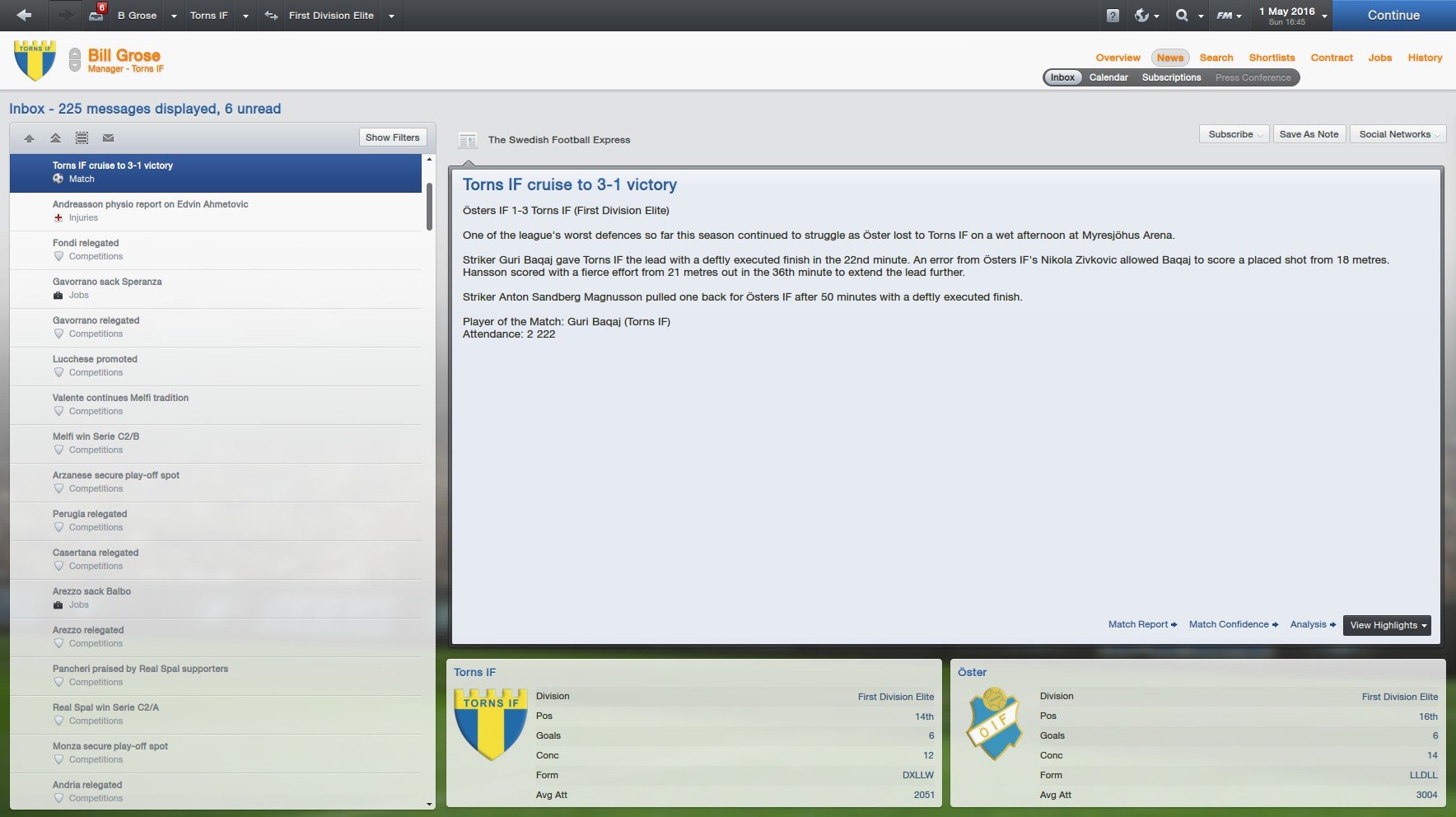 Results and Fixtures after the Oster Game 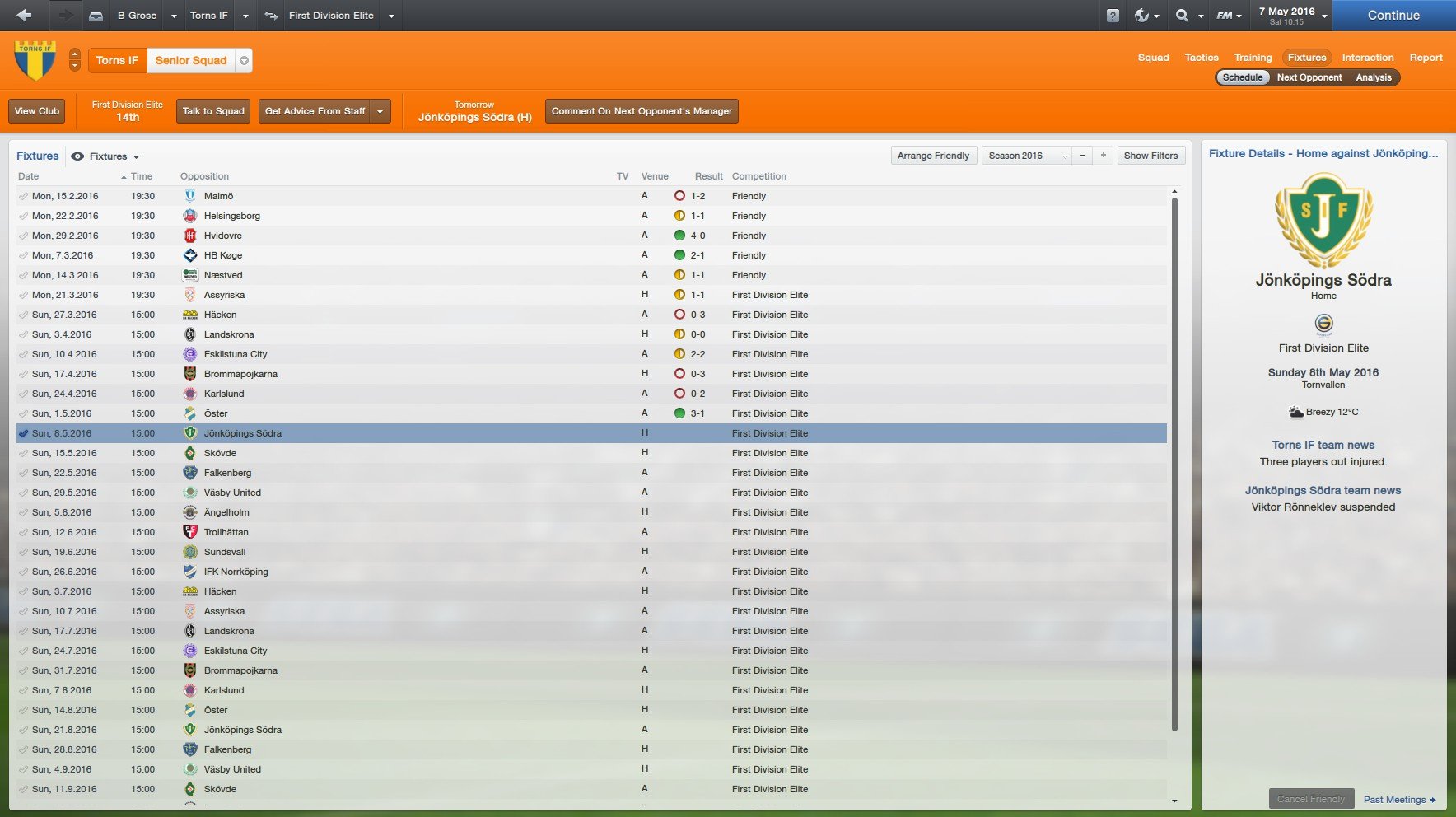 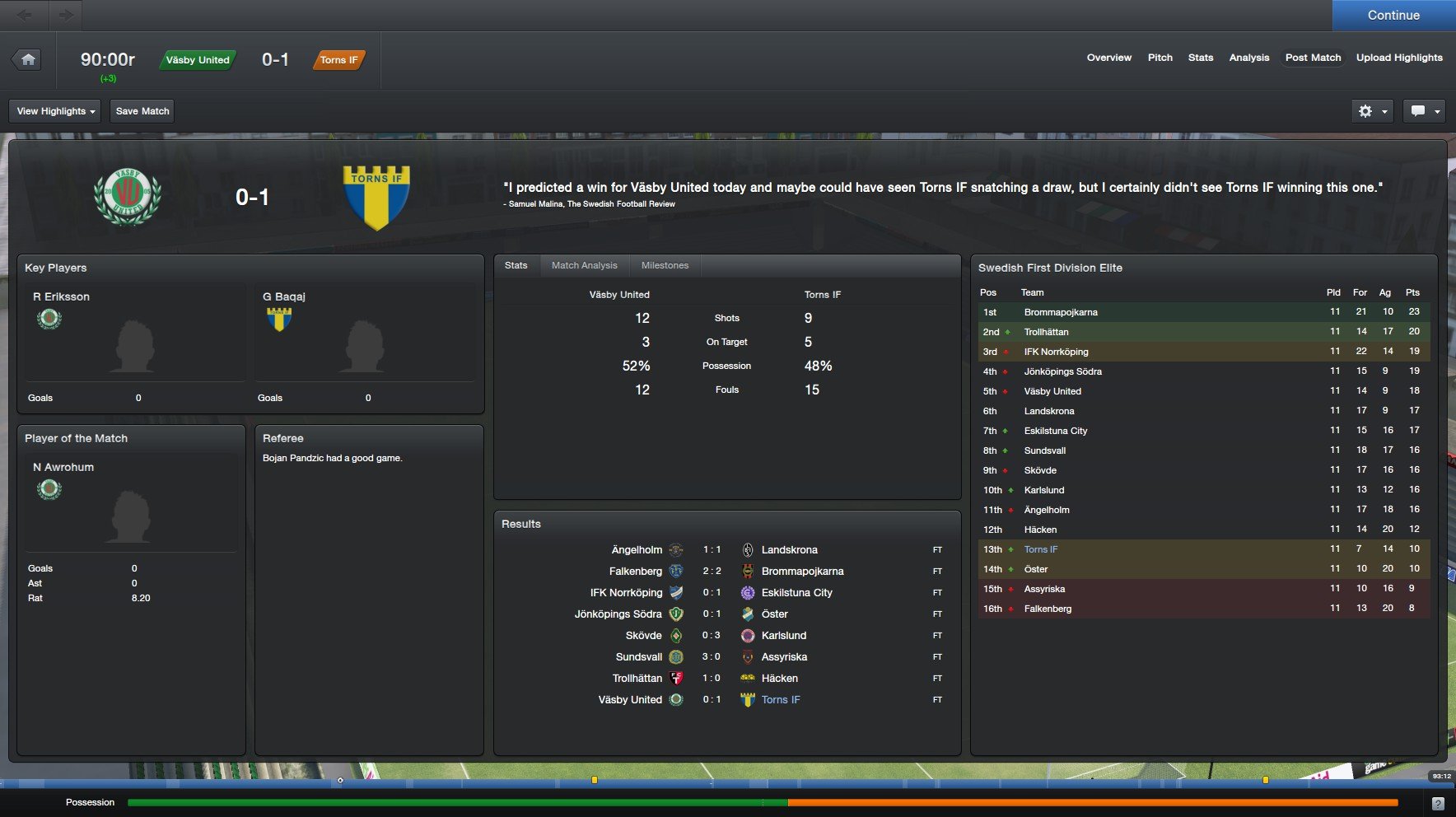 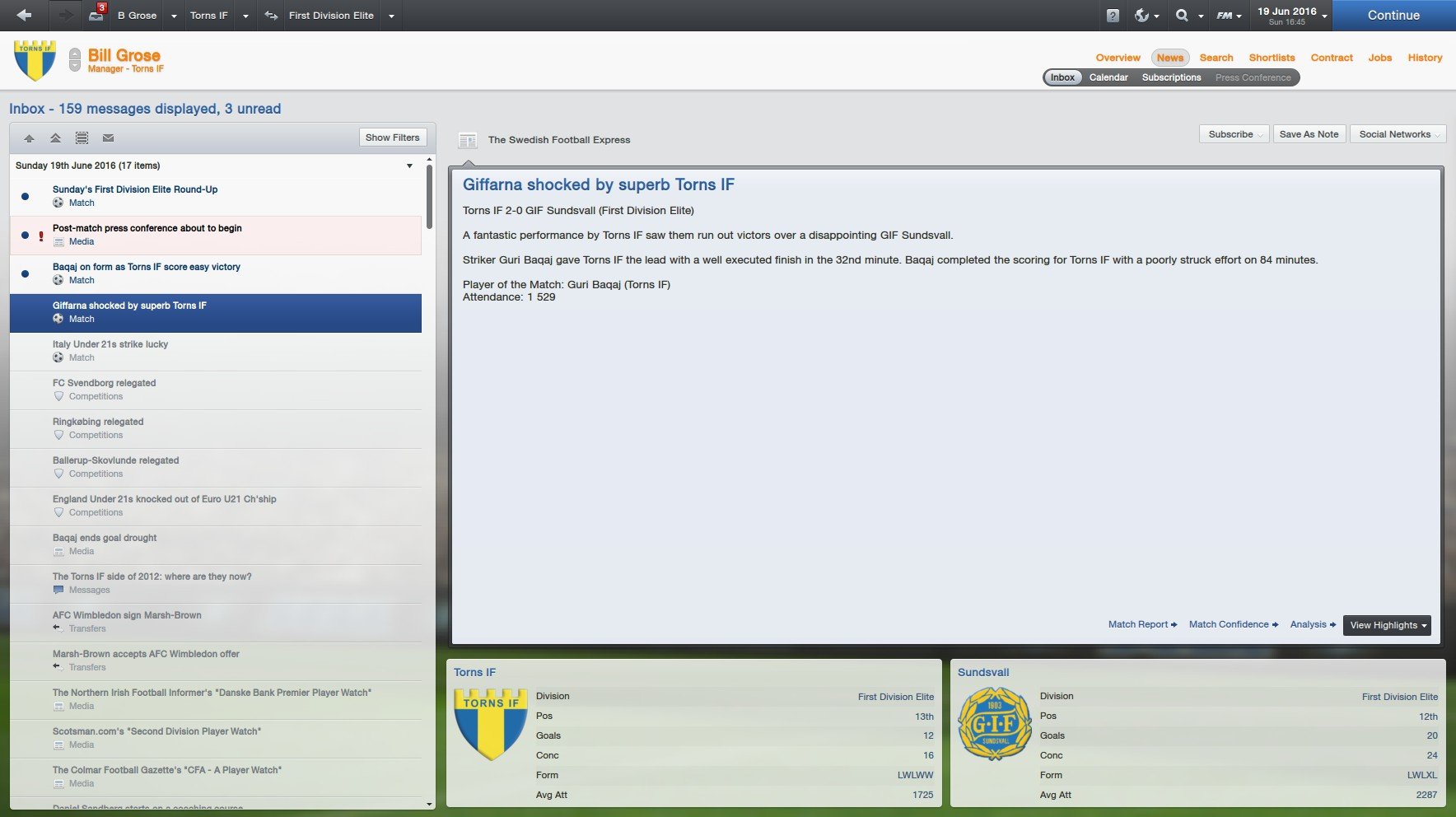 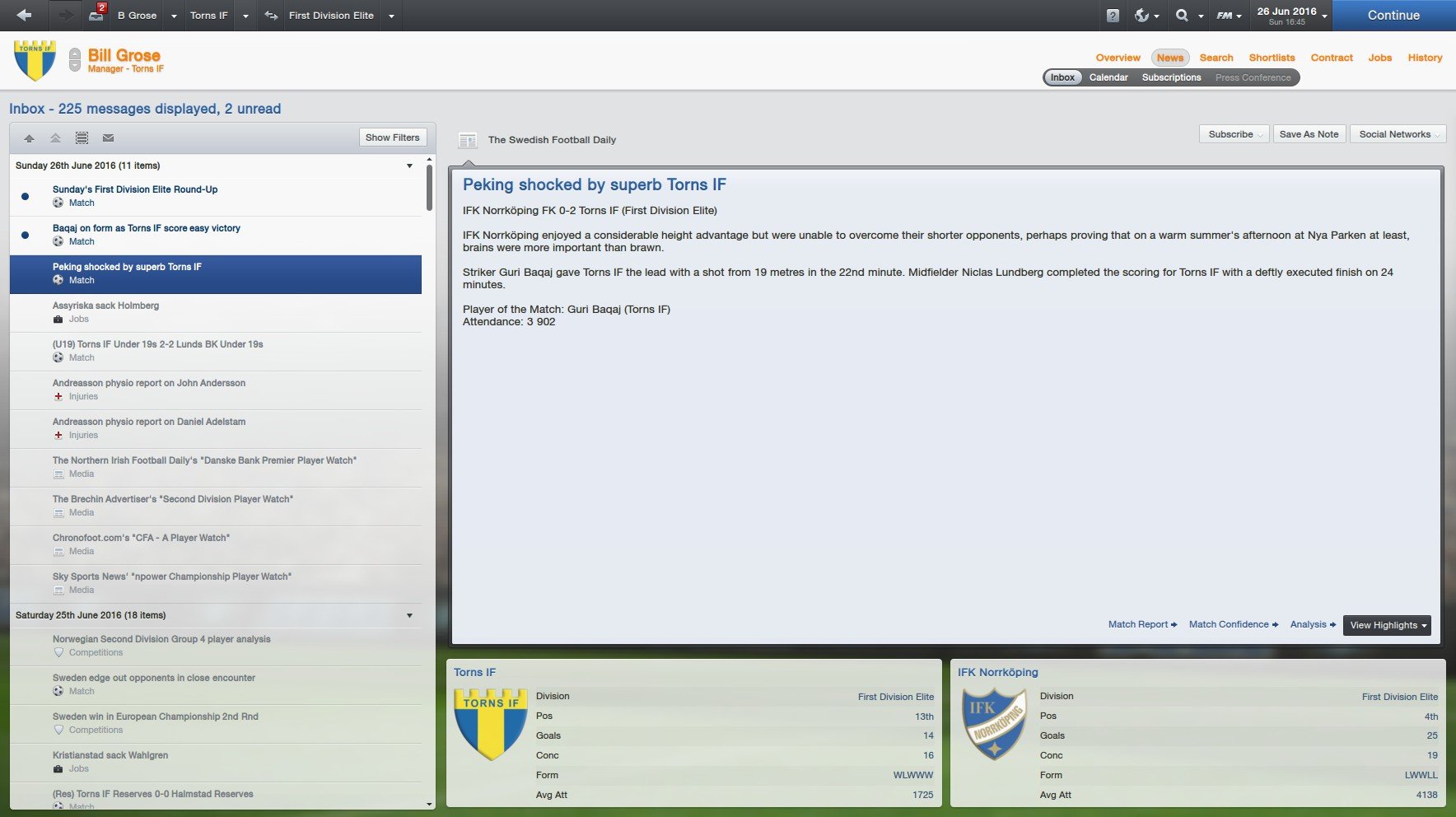 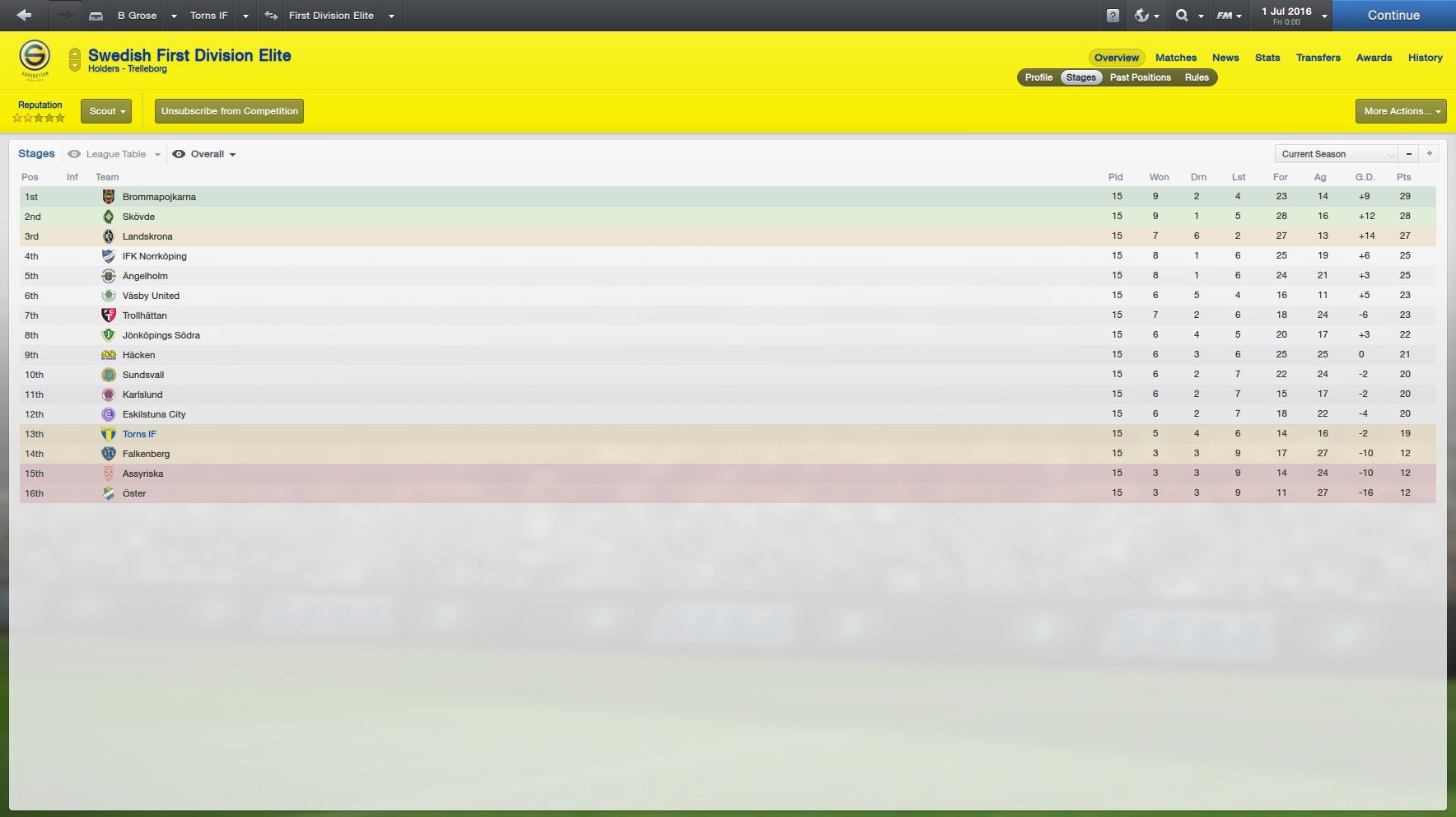 The FM Rookie
9 years
This season will be tough but if you can get throught it, you will progress easily.

andrew98
9 years
Bad results my friend. Your aim must be not to relegate....
Good luck Tango, IMPROVE...IMPROVE

July started off with a very challenging home fixture against BK Hacken who are one of the "Major Clubs" of Sweden, on our trip away to them earlier in the season we were beaten by them 3-0. In all honesty even though we had started perfoming really well recently I was not expecting to beat Hackem but to maybe get a draw. We ended up winning 2-1 thanks to both goals being scored by Guri Baqaj.

The victory against Hacken meant we were up to 10th in the league, having won four games in a row and finally being out of all the possible relegation spots, the remaining games we had to play in July were two away games to play Assyriska and Landskrona, a home game against Eskilstuna City and then a trip to play Brommapojkarna.

The toughest of these games would be the away game against Brommapojkarna who were top of the league following the Hacken game.

Both the match with Assyriska and the match with Landskrona BoIS were pleasing 2-1 wins which left us in 8th in the league as well as extending our winning streak to six games running. I strongly believed we could beat Eskilstuna City in our next match.

We went into our match with Eskilstuna City as narrow favourites but easily came out of it having won 3-0 and only allowing them 1 shot in the whole game. Following this victory we were up to 6th in the league and starting to look like promotion contenders.

Then followed the difficult match away to Brommapojkarna who at this point were now 9 points clear of 2nd placed IFK Norrkoping. I decided to play a 4-5-1 for this match and consequently it finished in a respectable 0-0 draw which I was pleased with. Unfortunately this meant our winning streak was over but the unbeaten run was not done yet.

I narrowly missed out on the July Manager of the Month Award to the manager of Brommapojkarna but this did not worry me too much.

With the 1st of August came the draw for the Svenska Cupen 2nd Round, I had been waiting for this for a few months as I am a big fan of cup matches. We were drawn away to Second Division Sodra Svealand team Enskede. This match was due to be played on the 13th of August.

Before our cup match with Enskede we had a league game at home to Karlslund which we comfortably won 2-0 thanks to goals from David Hansson and Saman Ghoddos.

After this was the Svenska Cupen Second Round Match with Enskede of the 4th tier, I was extremely confident of getting the victory here and advancing to the Group Stage. We easily beat them 4-0 with 2 goals from Baqaj, a goal from Hansson and a goal from Emil Pedersen to put us in the Group Stage for the first time.

We were placed in Group 2 with Allsvenskan side Orebro, Superettan side BK Hacken and 4th tier side Varbergs BoIS which was a very tough group.

We then had league fixtures against Oster at home, an away game with Jonkopings Sodra and finally another away game against Falkenberg. The Oster game finished in a draw which was slightly disappointing but at least it was better than losing. This was followed by a 3-3 draw away to Jonkopings Sodra, we had that game won but a slightly lackluster defence allowed Jonkopings Sodra to pull level at the last minute.

August ended with a trip to Falkenberg which I went into confident of getting the win but unfortunately this was not to be as we lost 2-0 which also ended our unbeaten run of thirteen matches, we were still 6th in Superettan after this so I was not overly worried but I was slightly annoyed.

With two months left of the season it is possible to push for promotion to Allsvenskan and the board have allowed me to change the expectations to meet this goal, hopefully we will be going up.

I leave you once again with some pictures.

Media Report on the Enskede game 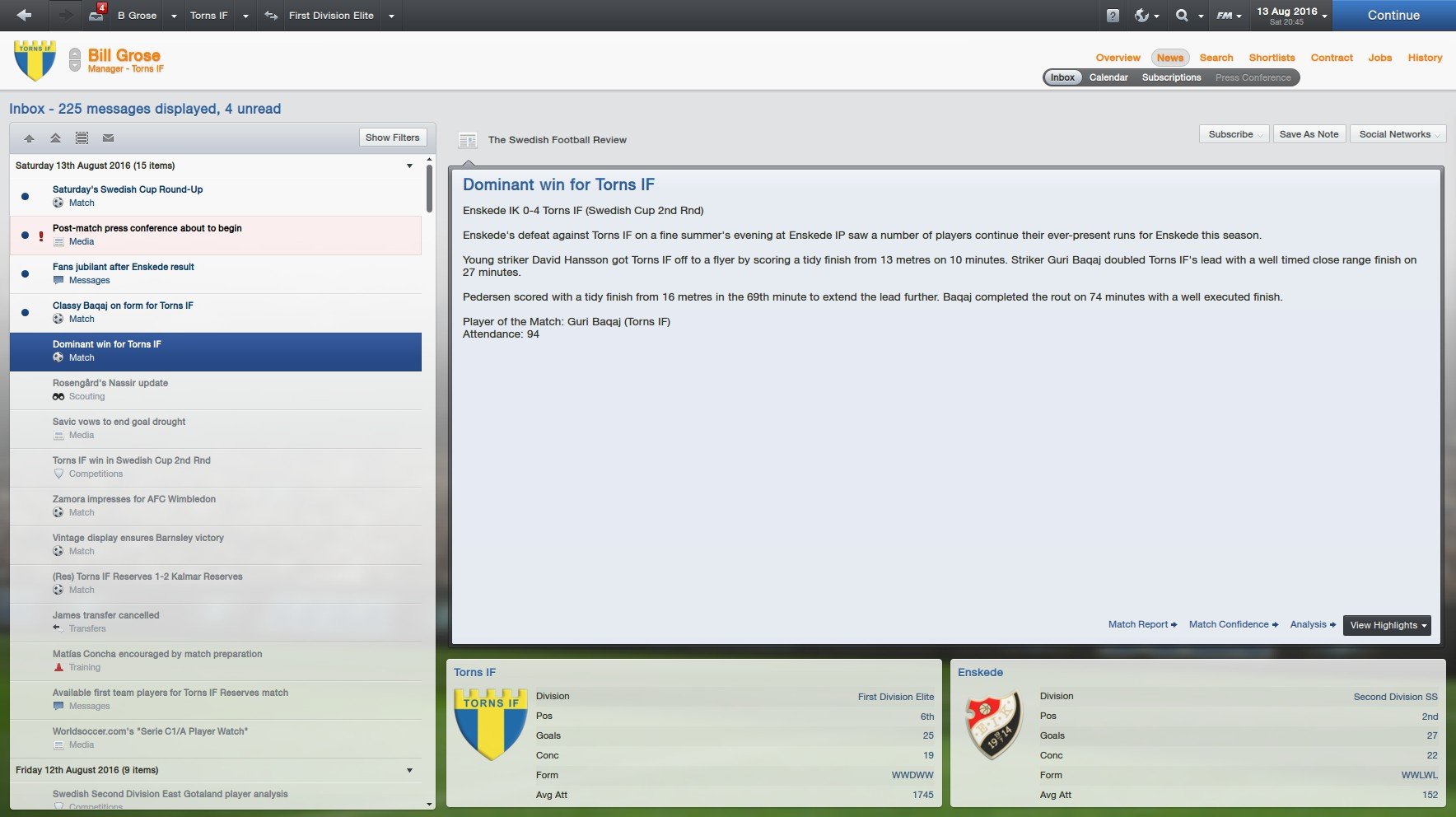 Media Report on the Victory against BK Hacken 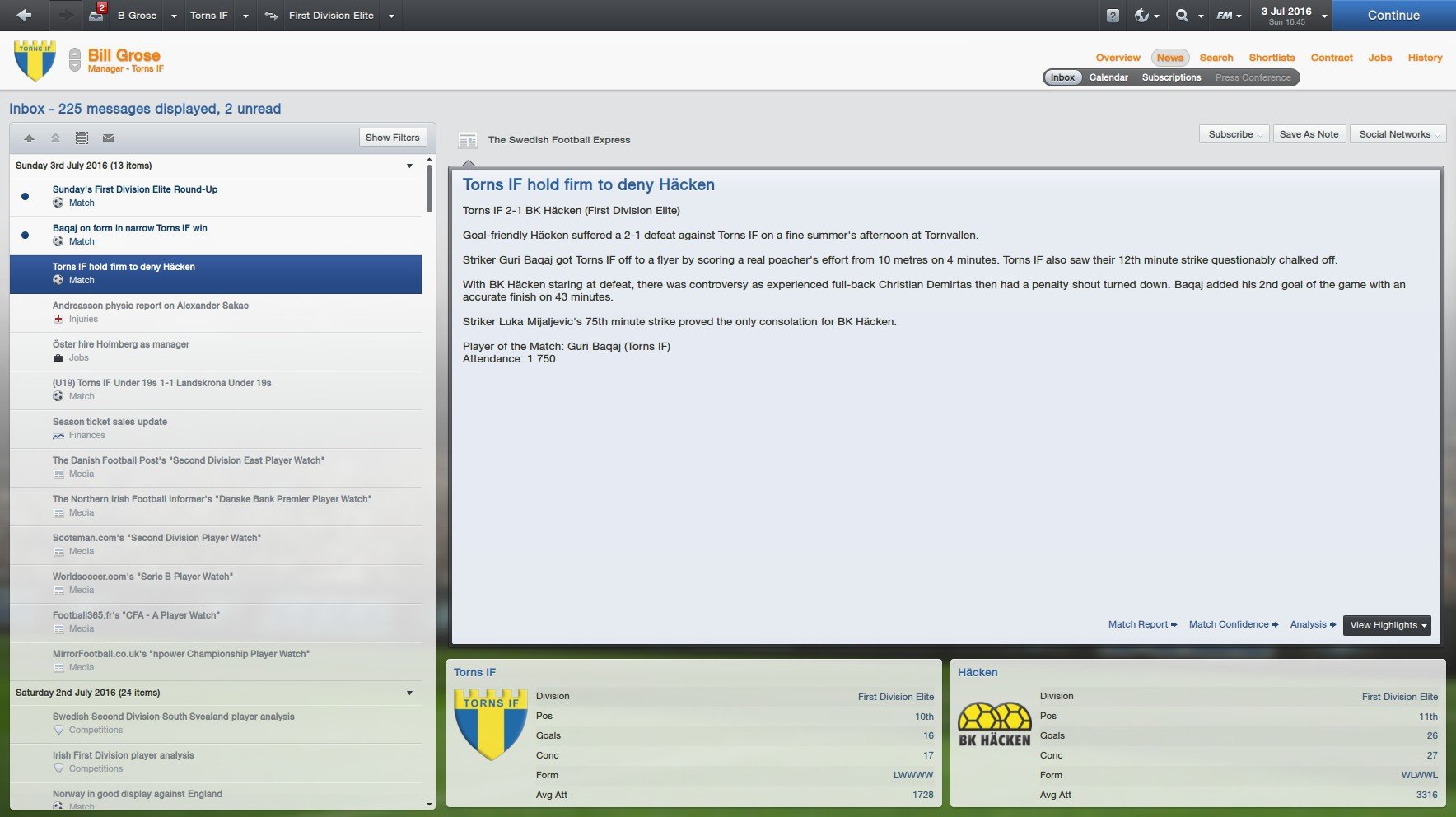 Resulta and Fixtures as of the BK Hacken game 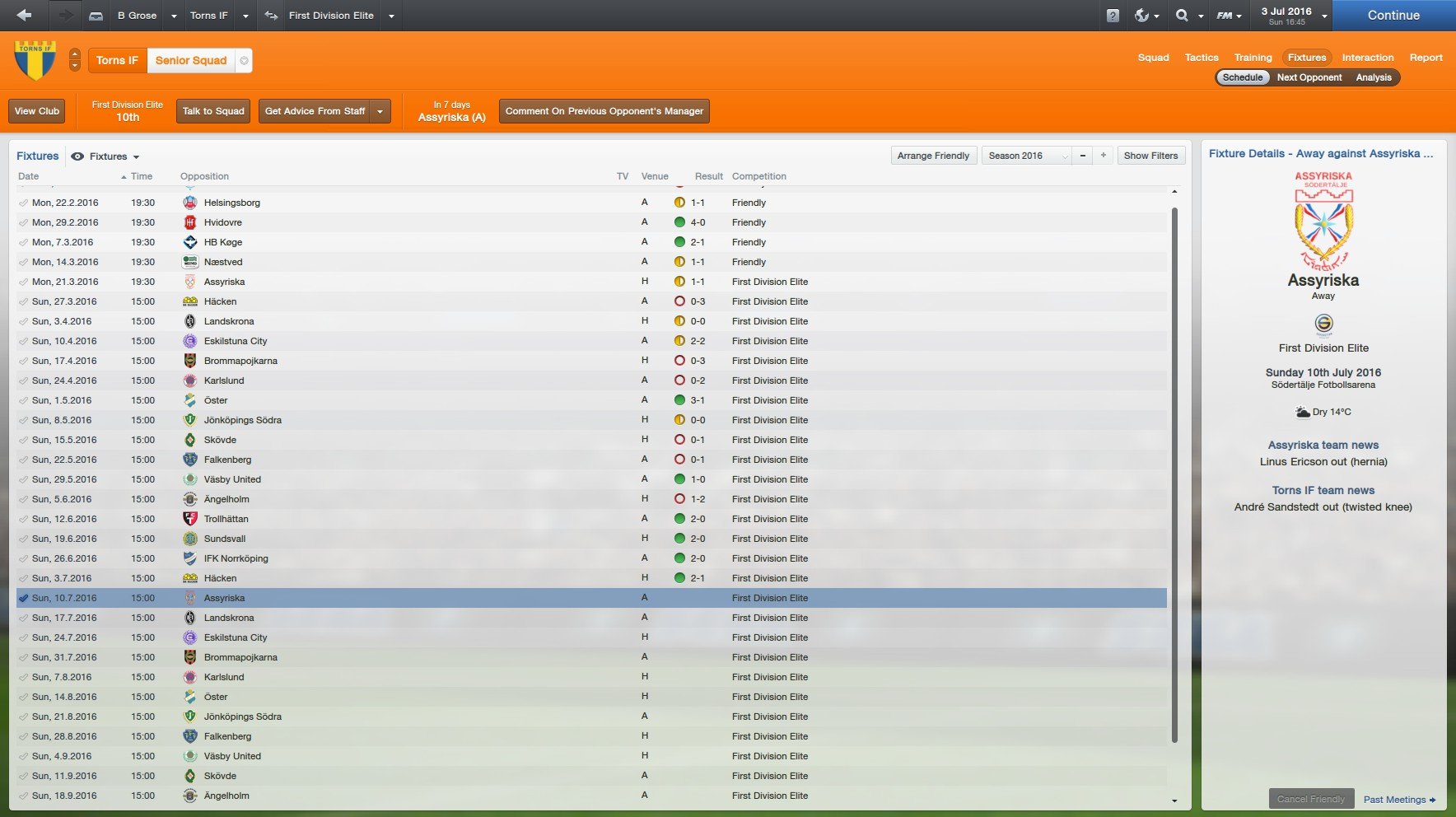 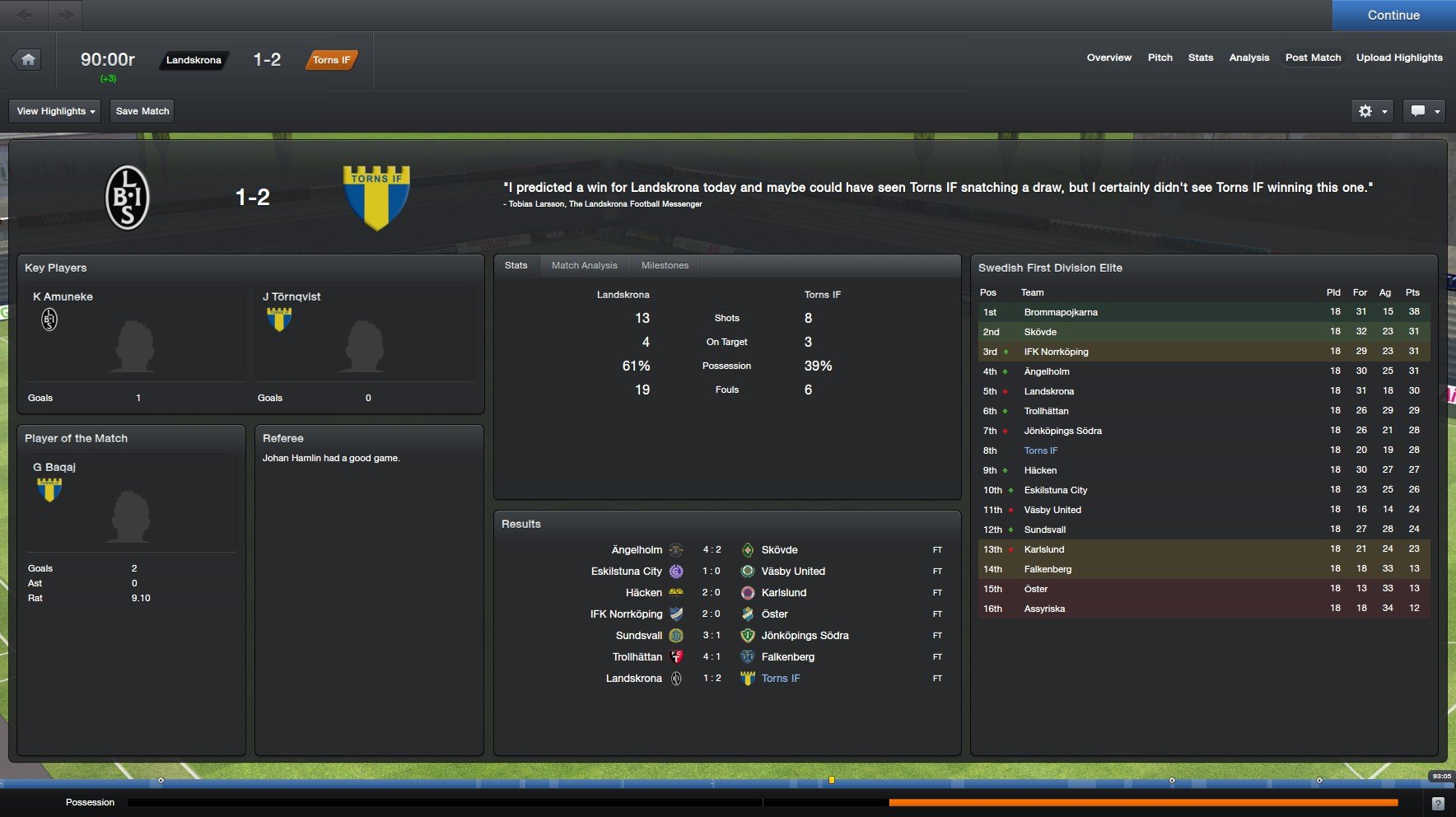 Media Report on the Landskrona game 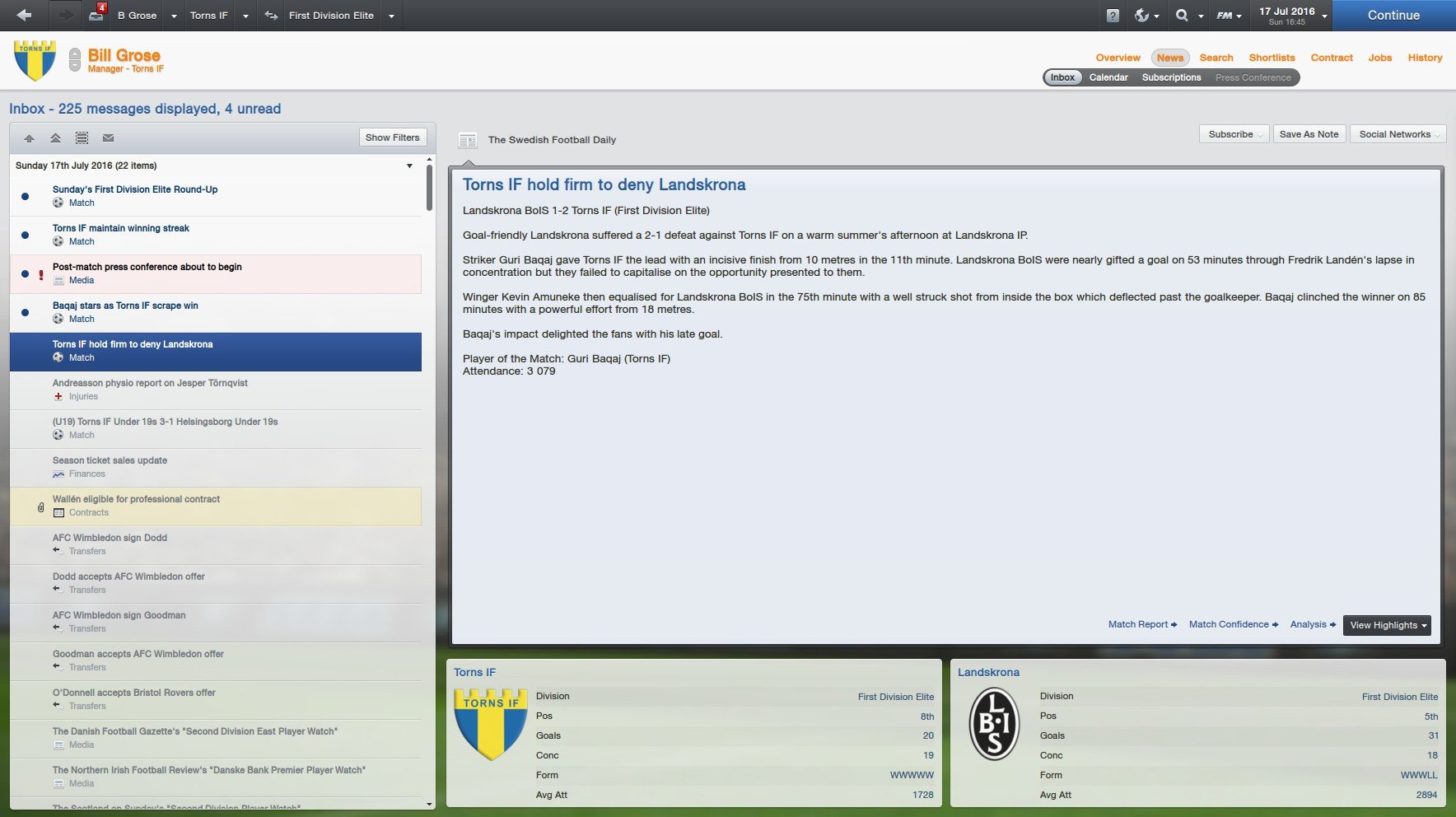 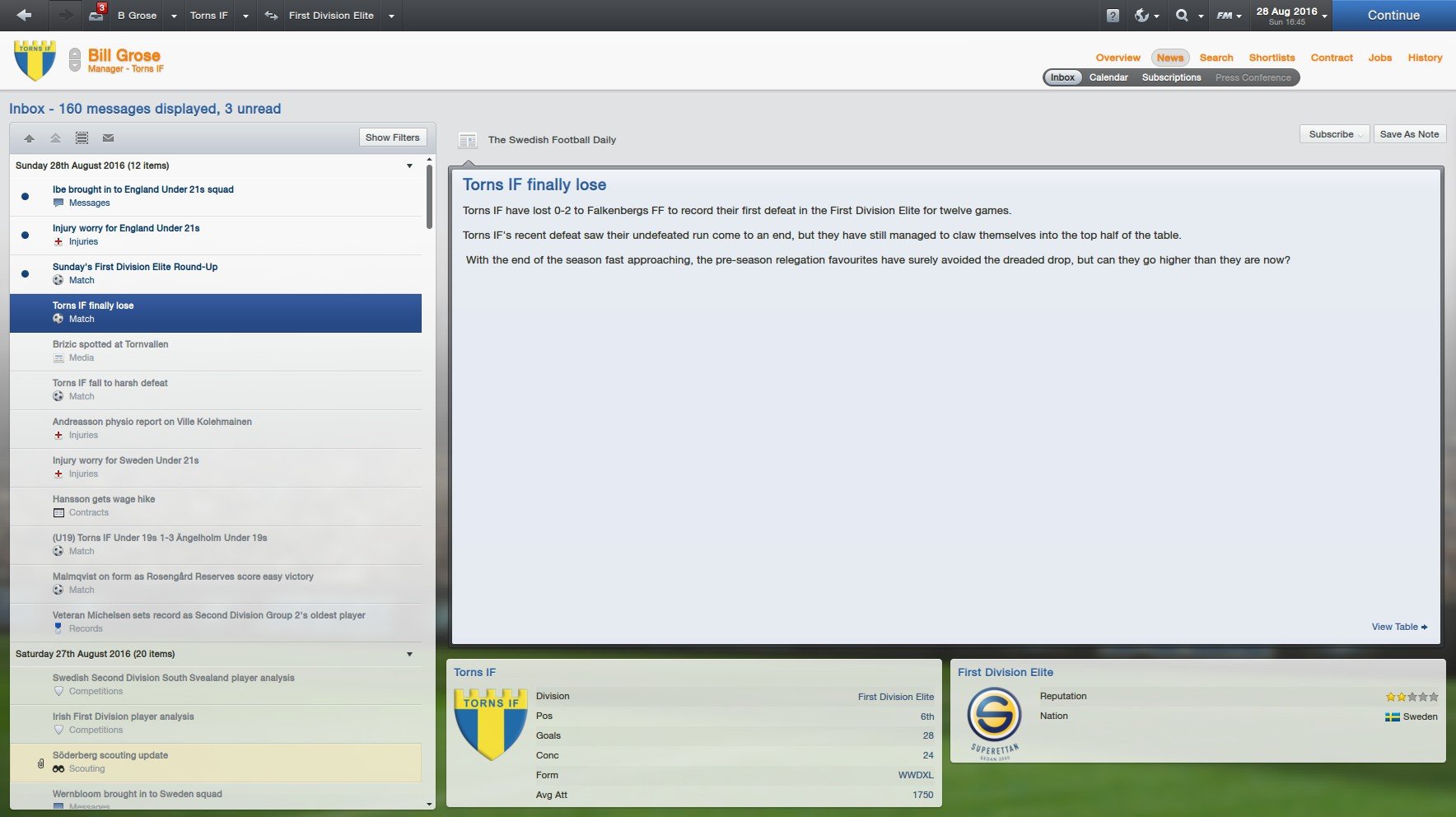