Successful month, winning four from four, and awarded Manager of the Month

Board approval rating “Stable” at 51%

Despite organizing the sale of some players, financial result a loss of 134K

Board approved increase of scouting area

Restructure of back office staff successful

Remained within both salary and wage budgets, but given financial situation, is not sustainable

Gabriel, Cajic and Strasky all impressive during month
Login to Quote

Kiwi
10 years
Utility forward David Bartek was the first to complain about the lack of first team opportunities. He was also the first one to be placed on the transfer list.

He moves to Czech second division outfit Jihlava for GBP275K at the end of the season.
Login to Quote

Should do after in took you about 9 years to actually get the game in the first place.
Login to Quote

Kiwi
10 years
And now I am making up for lost time!

Should do after in took you about 9 years to actually get the game in the first place.

Kiwi
10 years
It is always nice to see staff taking initiative, no matter where you work.

The increase wasn't significant (about 2K on wages, and double the transfer from twenty percent to forty) but it gives me a bit more flexibility.
Login to Quote

Kiwi
10 years
I am glad that the Czech Republic is much like Spain insofar as the rubbish players can be transferred and fees paid because otherwise I am not sure how I would make good on the finances.

With the loss during the month of April a whooping GBP135K, even if I could shave the wage bill by half, it would only have a circa 40K difference, but I will need to try all my tricks to get this club out of the red.

To that end, all the current staff are for sale as none of them are that great that it warrants keeping them. As is usual for me and a club in financial distress, the self imposed upper limit for the squad next year is going to be twenty five players. This will take into account the best players already at the squad, and the best available to me on frees as long term readers will appreciate how much I loathe paying compensation.

The third goalkeeper though – the one you use when one of your two starters is injured – will be a cheap member of the under twenty one side. I see this role more as a backup, and will only be used if he is on the bench and my starting keeper gets injured.
Login to Quote

Kiwi
10 years
Extra consideration will be given to players who can play in multiple positions. I have a place in my heart for specialists, as I believe every player worthy should be afforded the opportunity to nail a starting place in their favoured position, but injuries during the game often require careful managing. I have my scouts looking at a couple of utility players that I am very excited about.
Login to Quote

Kiwi
10 years
The Czech players, like South Africa beforehand, have a couple of decent players. Unfortunately for us, I need to be cruel to be kind, and look towards the long term financial health of the club. Short of continually selling players – which I see as a stop gap measure – I need to find other ways of bringing in additional revenue. That means increasing the attendance at games, which means playing an attractive brand of football and winning.

The short term effects will be a limited amount of money will be spent on transfers, with all the players where I can coming to us via frees. If that means that there is not a Czech player in the run on side next year, then that is a price I am willing to pay to win.
Login to Quote

Kiwi
10 years
The club itself doesn’t have any rivalries noted, and that is a disappointing aspect. It means that I can’t organize friendlies with the rival clubs and get some easy money, but this is an avenue I will explore during the off season.
Login to Quote

Kiwi
10 years
The attendances and the ticket prices have also been disappointing. The stadium is rented, and is costing 127K a year. Our ticket price – I kid you not – is 3, with season tickets of about 1,800 and a capacity of 6,746. Crunching those numbers, if we were selling out the stadium for our home games we would be making a profit of circa 170K for the year. Unfortunately, we are not selling the stadium out.

In fact, the average attendance is around the 3,200 mark. Using those numbers, we are only making a profit of 10K. Profit is profit though.
Login to Quote

Kiwi
10 years
The focus for next year has to be on the league, and with the state of our facilities the likelihood of producing a half way decent youth player is verging on impossible, and I doubt the Board would sign off any expansion plans at this stage. The top place in the league pockets around 570K, and that would stem the flow for around four months, but I need to seriously look to ways to either slash the expenses (232K) or dramatically increase the revenue (98K) for this club to have any sort of future.
Login to Quote

Kiwi
10 years
If we needed a way to spin the players leaving on frees as a positive for the club, then the fact that two of them are pulling GBP1K a week is a really good reason.

I'm glad to be rid of their wage contributions, but I really wish my predecessor had dumped them in the previous window for coin.
Login to Quote

Kiwi
10 years
Another reason why I am not putting so much faith in my youth prospects is shown below. We are running dead last in the under 21 competition. 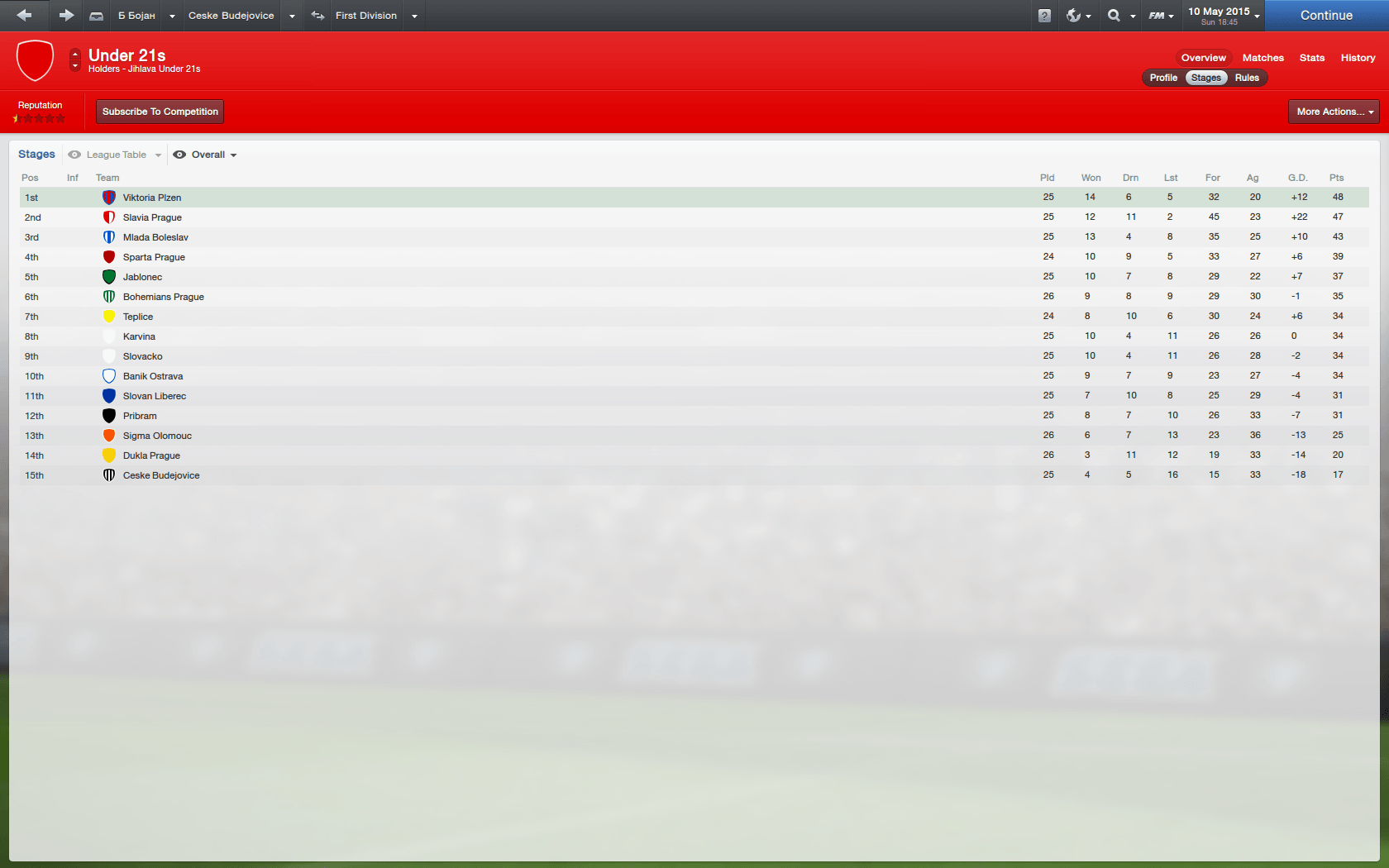 Kiwi
10 years
Transfers have been organised for some of my players. This has freed up some budget and allowed me to approach some suitable EU based talent.

I believe I am missing depth at right back and cover in the midfield, but I am pleased with those who I have recruited. My scouts came across a gold mine in Portugal of all places, and there are still tabs being kept on three players, a South African defensive utility that I want to sign, he would only be available in February 2016 though.

There is an EU utility which I'd be keen to throw the captains armband next year if I can't engage an English defender. He is still under contract with Rotherham, and his wages may be out of my reach, but I'll wait and see how receptive he is when he is released.
Login to Quote