Kiwi
10 years
There is also a fairly talented Norwegian striker whom is available on a free at the moment who, while we are extremely interested in his services, is not the slightest bit interested in us. It has happened to me before, and no doubt it will happen again. I'll see how six months or so of unemployment changes his way of thinking.

(In FM11, I had exactly the same thing happen. There was a superb Italian DC whom thought he was above us initially. After many approaches, and rebuffs, he signed on. The man grew to be a tough as teak defender with no viable weaknesses, a key player and captain as we became our ascent to the EPL....so I don't mind playing the long game with this fella)
Login to Quote

Kiwi
10 years
To bring us up to date now, here are the two games we have played in May so far... 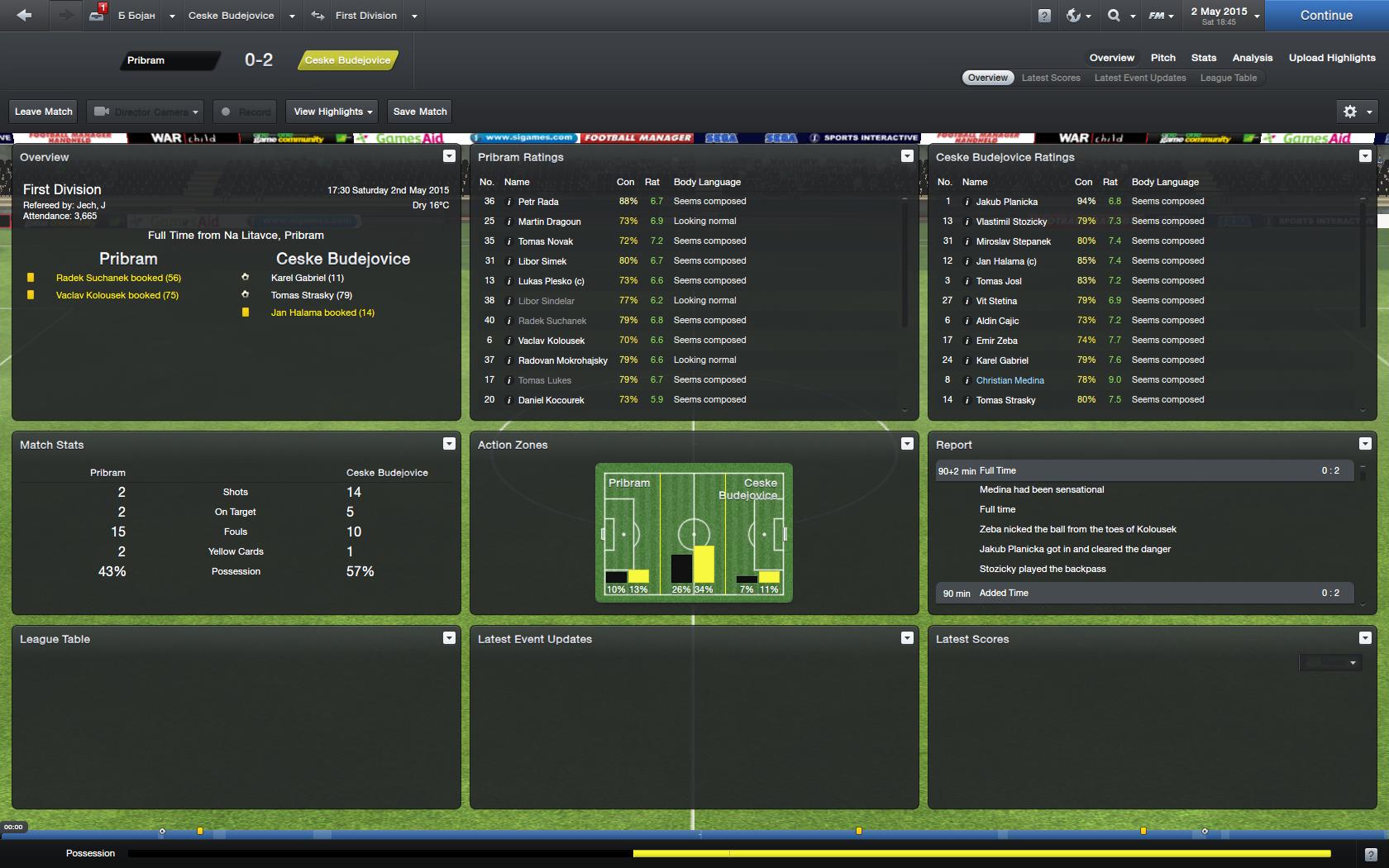 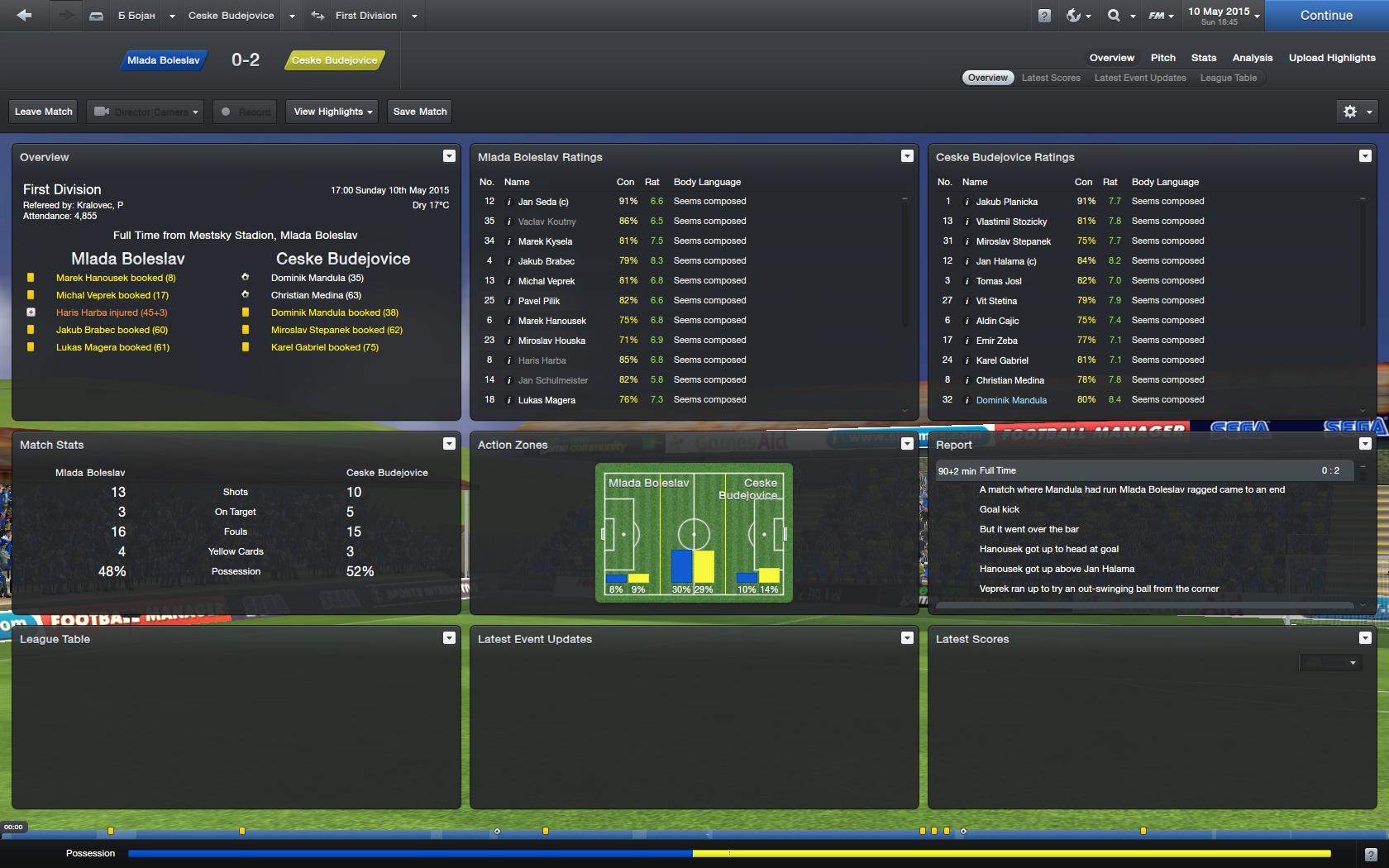 Kiwi
10 years
Key striker Strasky is resting up from a gashed head and will only be considered in about ten days.

Surprisingly, given the Board mandate to place defensive, possessive football, our fans seem disappointed that we are not playing entertaining football!! It seems you can't please everyone all the time.

In the league, I am confident of at least a third place finish. We are currently third, level on points with Sparta Prague, but they have a game in hand.

Sigma Olomouc are perhaps surprising leading, with a four point buffer at this stage.

Nine points up for grabs by SK Dynamo České Budějovice, and I need to do everything in my power to get as many as I can.
Login to Quote

Kiwi
10 years
The damn South African utility, as well as being a bit on the youngish side, also wants a wage which amounts to highway robbery. The most I can currently offer is about GBP400, and he wants about GBP1400, for starters...so I don't think there is liable to be a satisfactory outcome there.

The other utility player is only off contract in December, so I have a bit of time to wait.
Login to Quote

Three players were picked in the team of the week, with defender Hamala in the run on eleven, and goalie Planicka and striker Mandula in the reserves.

I can only hope that this exposure may increase the likelihood that a club will make an offer.
Login to Quote

Kiwi
10 years
Not helping the financial state of the club are transfer clauses, which mean we need to stump up GBP18K even before we turn the lights on!
Login to Quote

Kiwi
10 years
I am glad that FM13 has changed the contract negotiations slightly insofar as if either party pull out of a contract, we can at least re-engage them later.
Login to Quote

Kiwi
10 years
My scouts are uncovering plenty of players whom are talented, but most are either not interested in joining, and I am finding that those whom are are tied to long term contracts by there respective existing clubs.

It would appear the attraction of playing in the twenty second best league in Europe, for a manager with Sunday League experience only has limited appeal. I for the life of me, can't think why!!
Login to Quote

Kiwi
10 years
The rest of the league have caught up - all the clubs have now played twenty seven games. SK Dynamo České Budějovice have surprised many by holding onto third place.

Sparta Prague have also incurred the wraith of their fanbase, by only managing a nil all draw against last placed Dakla Prague. Sparta do hold second place by a solitary point as Боjaн's boys attempt to finish strongly and prove to the new management that they are worthy of a place in next years roster. 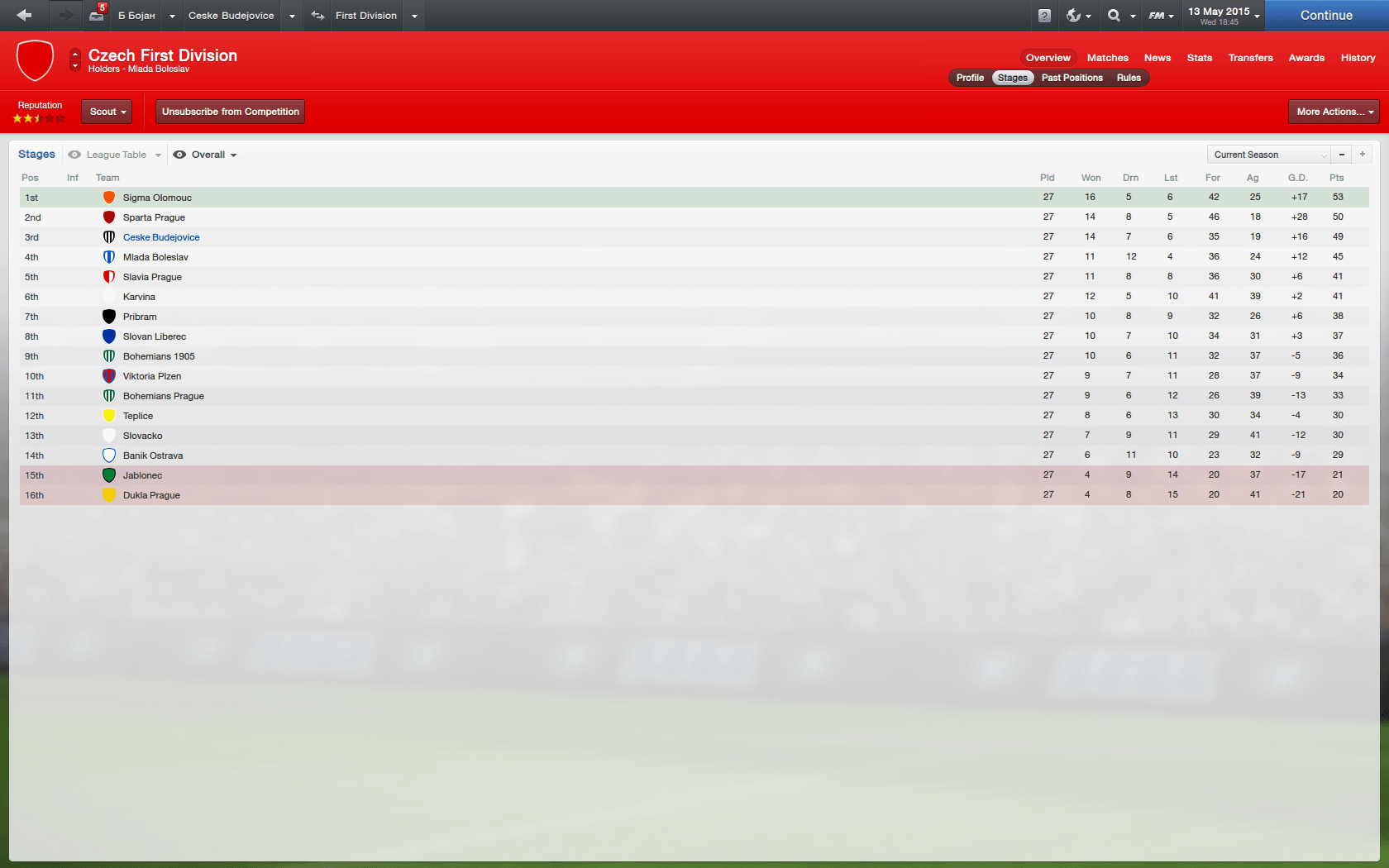 Kiwi
10 years
Overexertion in the weights room has put central defender Juri Tischler out for 5-6 weeks.

I had considered him to be a fringe player at best, but now I will have to wait a wee while before offering him to market.
Login to Quote

Kiwi
10 years
Sparta Prague, the long held team to beat, got absolutely dorked....by a second division club in the final of the Czech FA Cup. 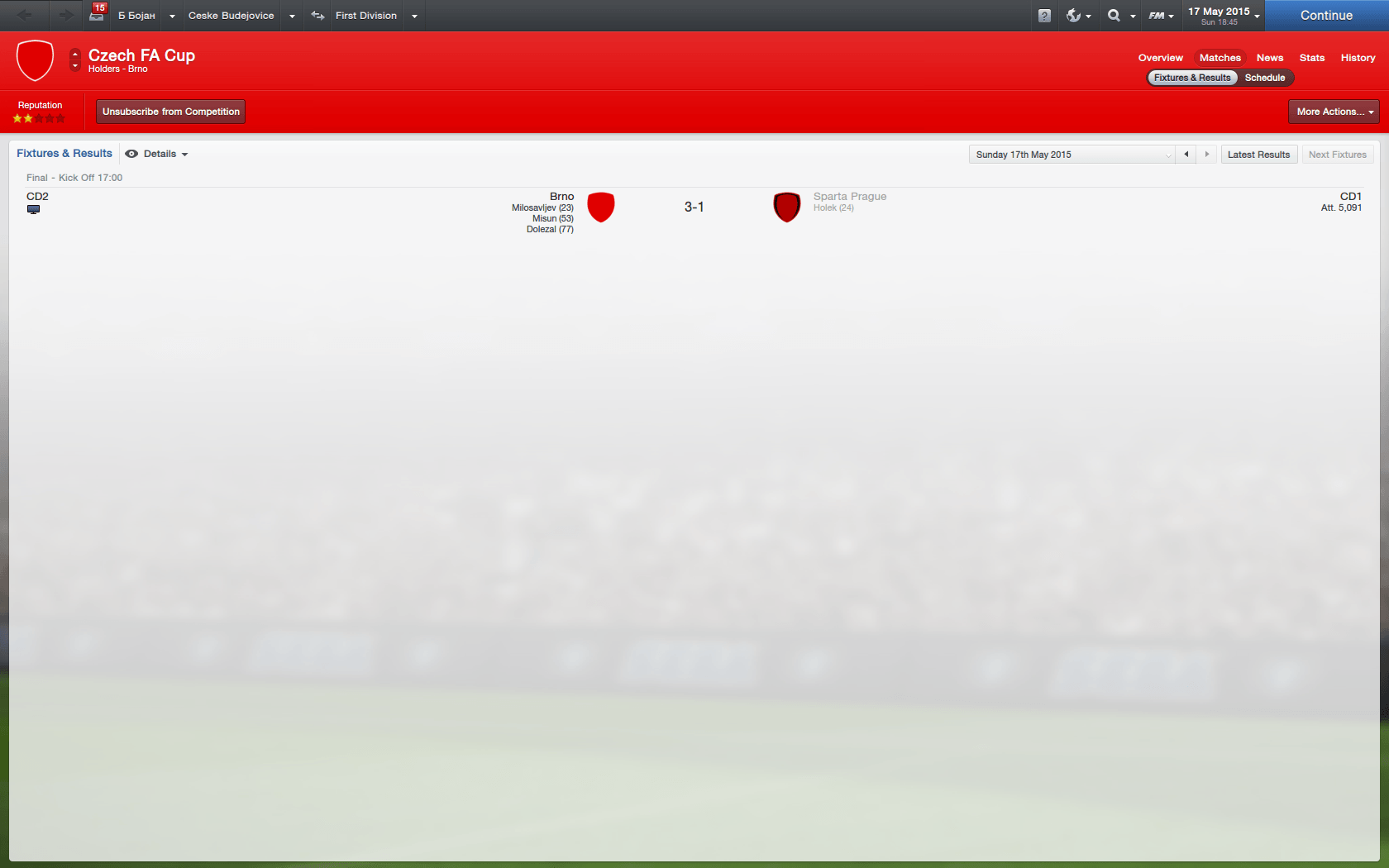 Kiwi
10 years
Man U reclaimed the EPL crown, after Man City ended their defense a fair way off... 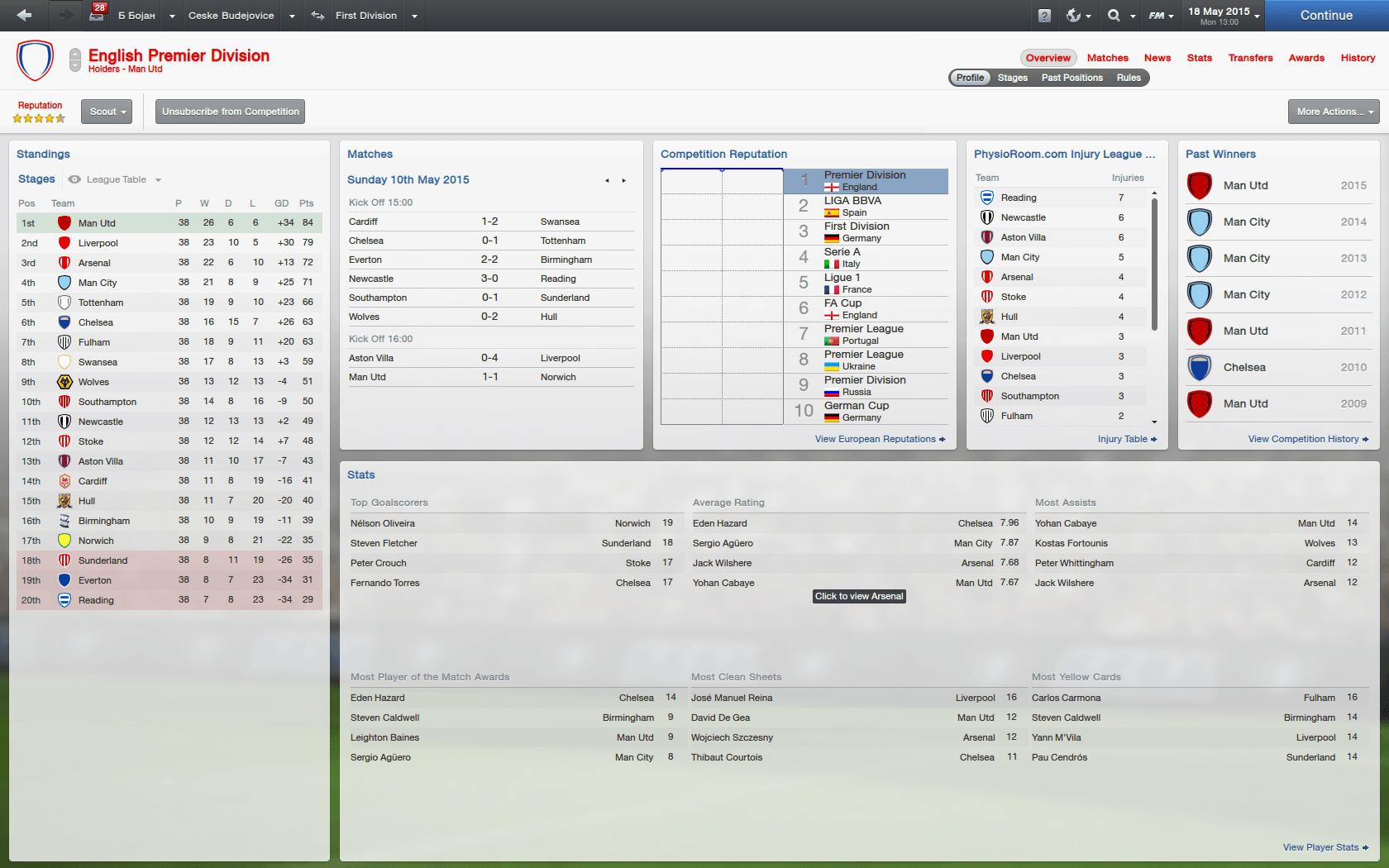 Kiwi
10 years
Okay, I agree that in-game is running a bit behind real life. Then again, if you finish sixth, and you manage Chelsea....

We continue to like our two goals per game, and this time it was our replacement wingers that saved us. 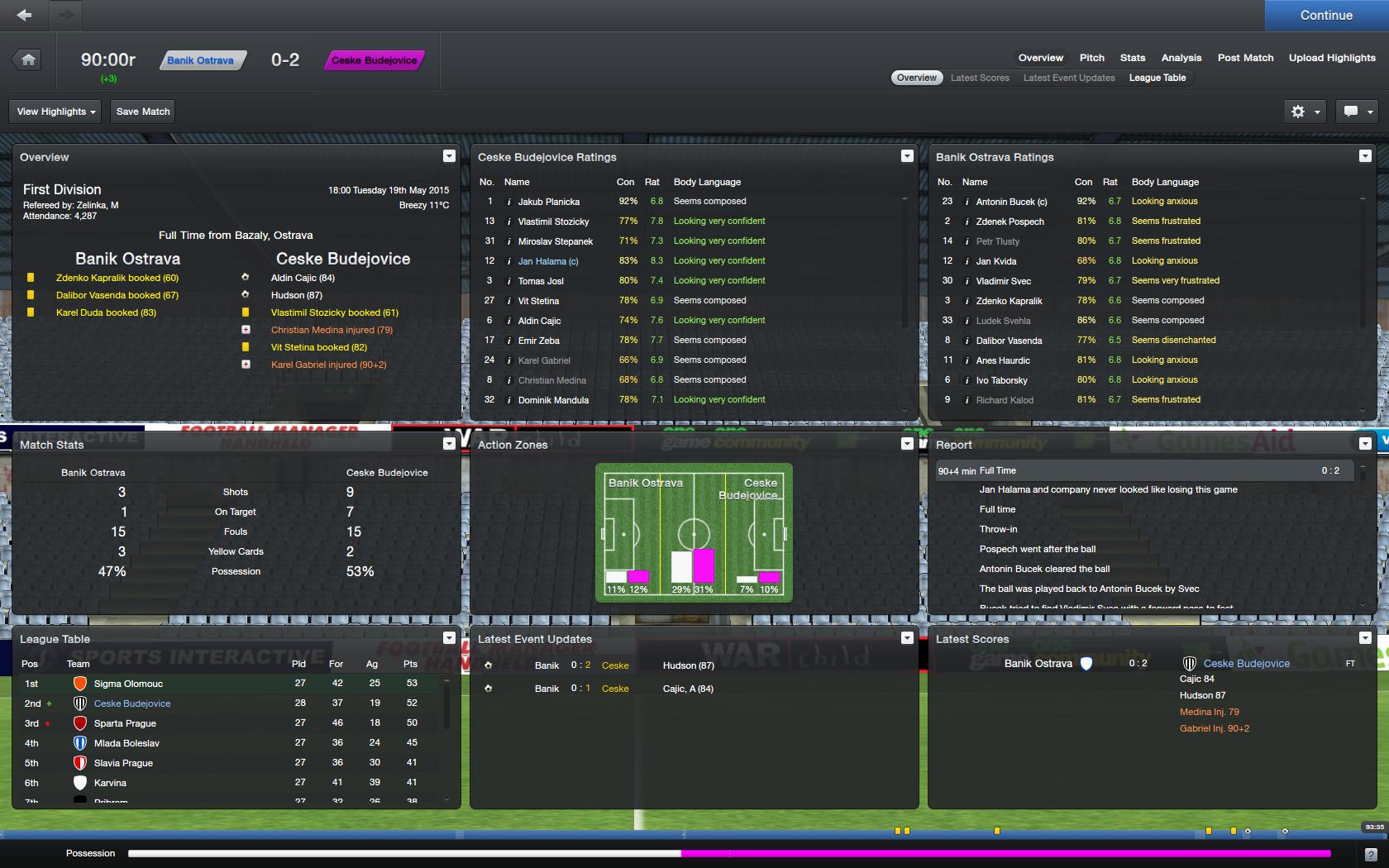 We have Medina to thank for two cracking goals in the first half to secure the three points. 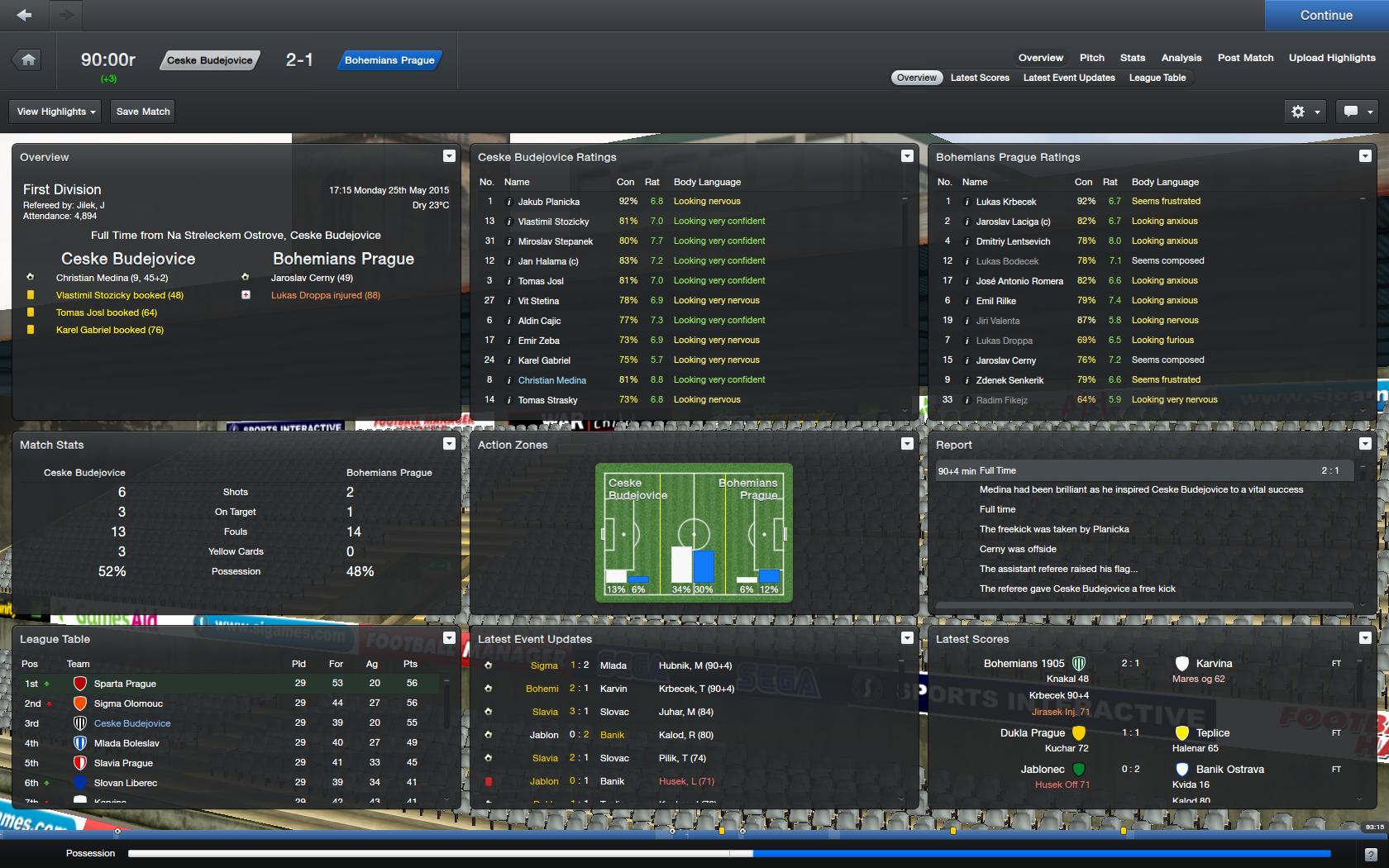 The title race has now come down to the last game, with three teams still in the hunt. Sparta Prague have, however, claimed the top spot, at least for now.
Login to Quote