Kiwi
8 years
It is a strange thing sitting in third place, coming into the last match of the season knowing that your team could still win the title outright.

Stranger still is the sense that while the team are in a position to win the league. It will be something of a last hurrah in a Ceske shirt for the vast majority of the players, with only a select few impressing the new manager.

The strikers left in the stable have not been prolific enough, and while we have won every game since I have taken over, you would have to say that none of the games have been a resounding win. We have done enough to take the game away from the opposition, with two goals being scored in each game. We haven’t annihilated the opponent, taught them the kind of lesson you hope they never forget, or to quote from that great movie “The Waterboy” ‘Son, you just opened up a whole case of whoop-ass.’ The lack of skill shown by the strikers might also be part of the reason why the fans are less then impressed by the dull and unattractive football played.

Here’s hoping I can pick up a talented couple of strikers in the next few months to be able to reshape the attack to tackle Europe.
Login to Quote

dan4rmnaija
8 years
Great story kiwi, I was following your 2012 story and I definitely will be following this one
1
Login to Quote

Kiwi
8 years
Hi dan4rmnaija and thanks for your comments, I am glad you are enjoying the story....I have a long way to go before I can match what I did with my 2012 stories, but I'll give it a pretty good try.

Kiwi
8 years
Our midfielders and wingers have been disappointing, so I’ll also be looking to replace the vast majority of them, as my Ass Man loves telling me that we are misplacing out passing in the midfield and missing many first up tackles. I believe that the midfield roles are key to any success that your team has, so I’ll be attempting to recruit the best people I can in those roles. The midfield pair are really critical as they act as feeders to your fast men – your wingers and strikers. If they are ineffectual, it puts pressure on your defensive lines.

That could be one of the reasons why our so called “last line of defense” has been carded so much, that because the midfield has been sloppy, the defense are having to run hard at the opposition and shut down the play, rather than act as the sweeping cover defense that shadows the midfield. Based on stats, and two goals leaked, you may be forgiven for thinking that the defense is impressive. Reality is that our fullbacks are slow, and we have potentially two players who may make the cut next year based on our recruitment, and I am disappointed that my South African centre-back was greedy and we couldn’t meet his wage demands.

The qualities I will be looking for in any new recruits are a sense of professionalism and a strong work ethic. I want to keep eleven players on the paddock, and if there is retribution to be had, I’d like to think that the players will be smart enough not to be caught.

Our keeper Planicka has been marvelous, but with the arrival of the two youngsters, the best he will be able to hope for next season is a bench role. Secretly, I am hoping that he plays well in this final game and he is head hunted for next season, it would ensure that we get some cash for him (always helpful given our financial position) and it would secure more playing time than he will get as a third string team playing here.
Login to Quote

The FM Rookie
8 years
It seems like you are trying to create an empire here, with certain qualities needed by players to be signed

Kiwi
8 years
To be honest Rookie, at the moment I would settle for having ANY of the players I approach to will willing to discuss terms with me, and if I am honest, that part of it was more for the stories sake. I remember one of my best defenders from a free was Jon Flanagan, who got carded more than most.

The other aspect is I am not here for a long time, just a good time.

Won all four games during May, although fans are concerned that there is less than exciting football being played but securing Manager of the Month for May

Board approved increases to transfer and wage budgets

Aldin Cajic impressed during training for the month

Stayed within transfer and wage budget, but finances still in the CENSORED, with a loss of 185K
Login to Quote

Kiwi
8 years
With the annual fees payable to our two feeder clubs we are 35K down and it is only the first day of the month. Add to that the transfer clauses and that will be another 18K.

I really need to sort the finances out, even if it means having a rubbishy squad for a year or so!
Login to Quote


All I can say is bloody hell.

We secured another victory, with a scoreline which we have come to know and love. Medina's brace powering us on, but the other two games, where Sparta Prague lost a closely contested 2-3 battle, and Sigma Olomouc got their backsides handed back to them on a plate, losing 0-5!!! 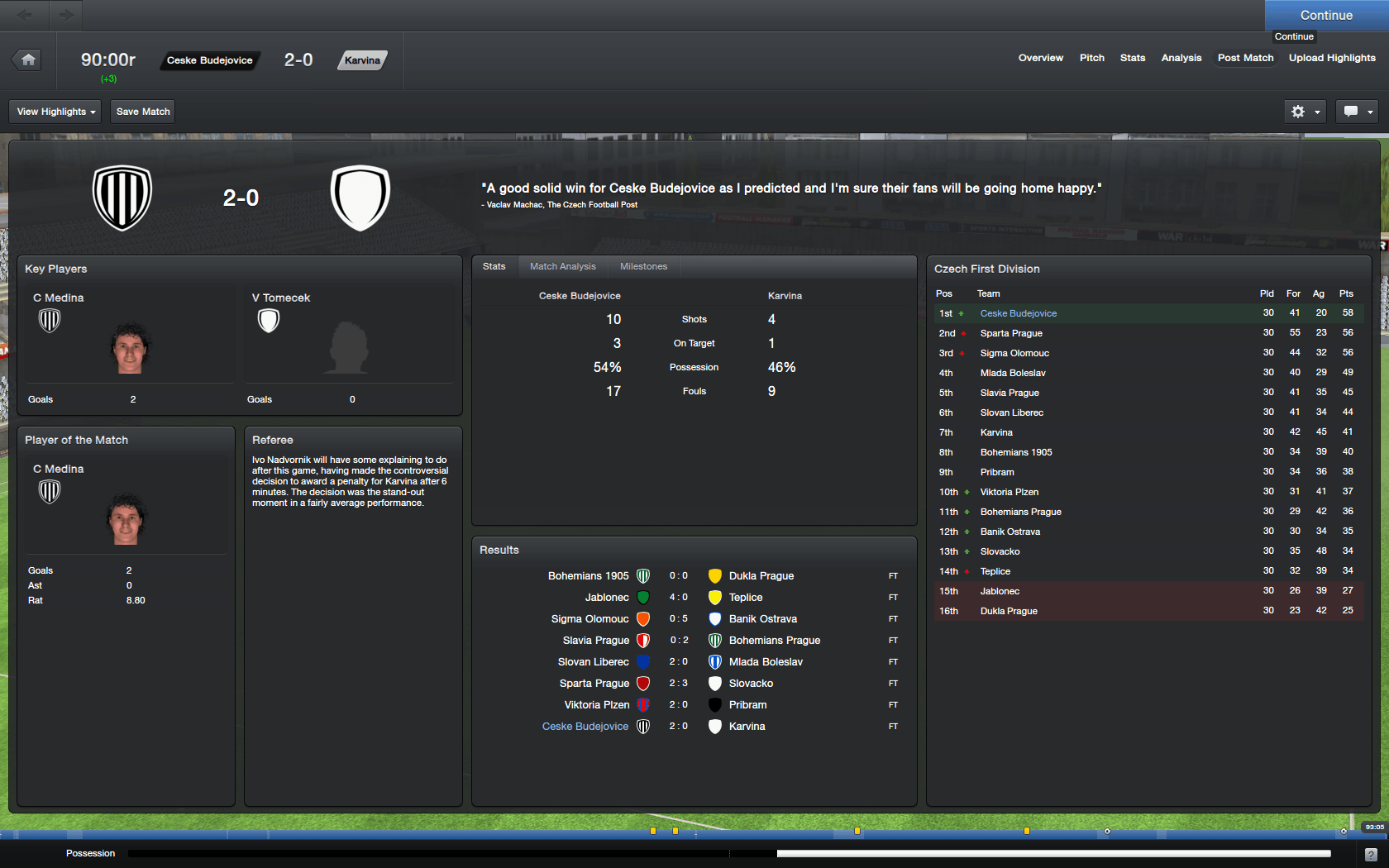 Kiwi
8 years
Being champions qualifies us for the 2015 Champions Cup, where it appears Barca have some recent form. Someone called Messi is apparently the best player in the world??? 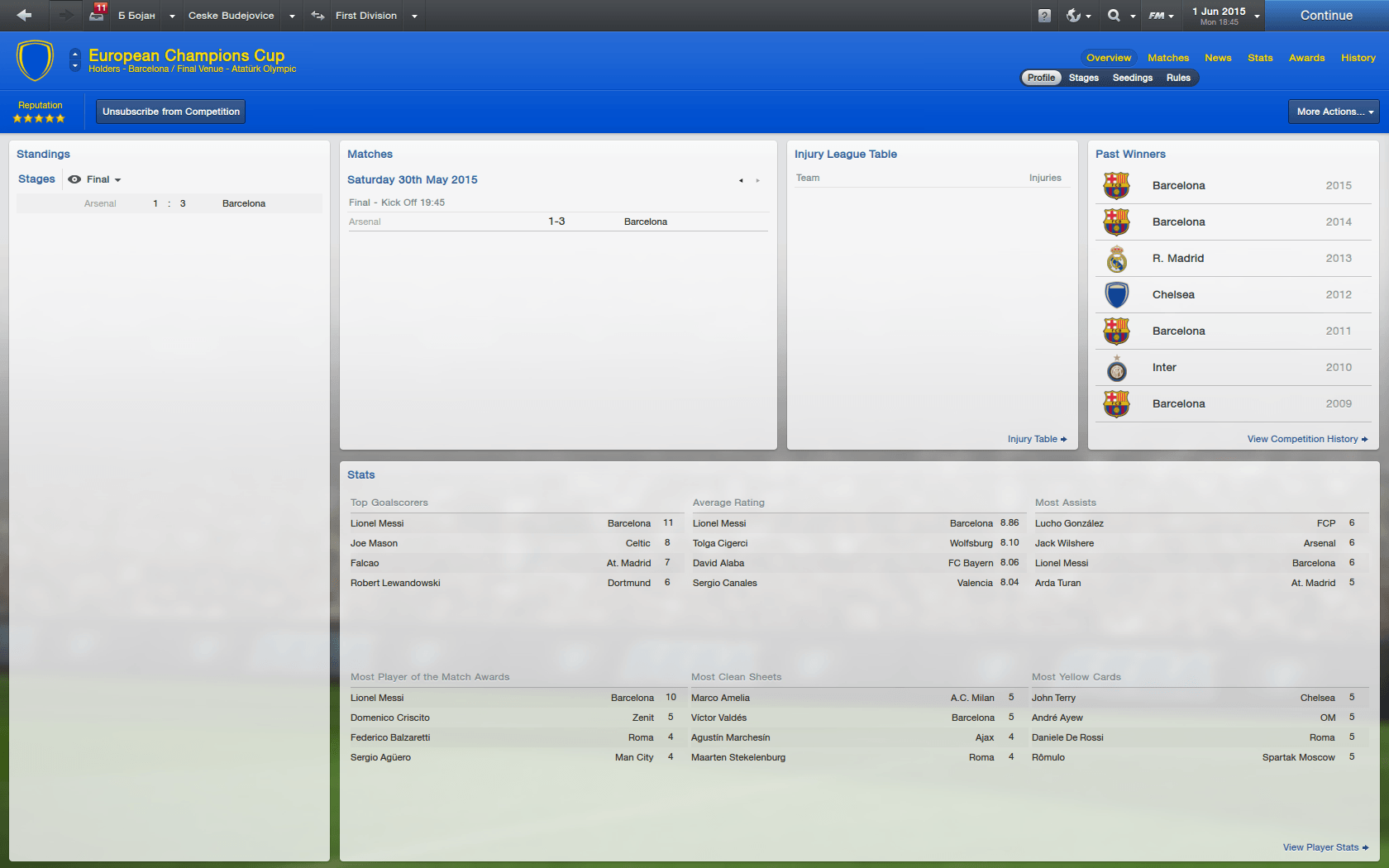 Kiwi
8 years
This is something I have experienced before, but I still don't understand....prior to the last match the Board approval is at 62%. We go and win the final match, and ultimately become champions. Much money is dumped into club coffers and you are hailed as one of the best managers around, thank you for this unexpected success, etc etc, blah blah blah.

AND THEN YOUR BOARD APPROVAL RATING DROPS TEN PERCENT. WTFool?
Login to Quote

Kiwi
8 years
Couple of firsts for the team....

Our top placed finish in the league represents a new highest place finish for us, with our previous best being sixth.

Young Karel Gabriel, who is only sixteen, and was installed as the starting right winger upon my arrival at the club places second in the Goal of the Season for his effort against Slavacko.
Login to Quote

Kiwi
8 years
So much for us winning the league, getting into a Europe competition and as a result being a more attractive destination for players.

We are having little luck negotiating with any players, and with the financial state of the club being precarious, the wages we can offer (top end GBP425) is almost laughable.

I am hoping the player movement at the end of June will free up some room with the budgets and allow us to make some more signings, else we could be embarrassed in Europe.

We've tried organizing some friendlies, and even against the top Czech sides, we would only net GBP1K per game. So that will not be the money spinner I was hoping for either.
Login to Quote

dan4rmnaija
8 years
Congratulations on winning the league
Login to Quote

Glenn T
8 years
That is awesome! Congratulations on the league win!
Login to Quote