The FM Rookie
9 years
Very strong start to the season Or, another league title on the horizon?


The Wood have started their Blue Square Bet Premier campaign amazingly, and now they want to keep up the performances and remain top! 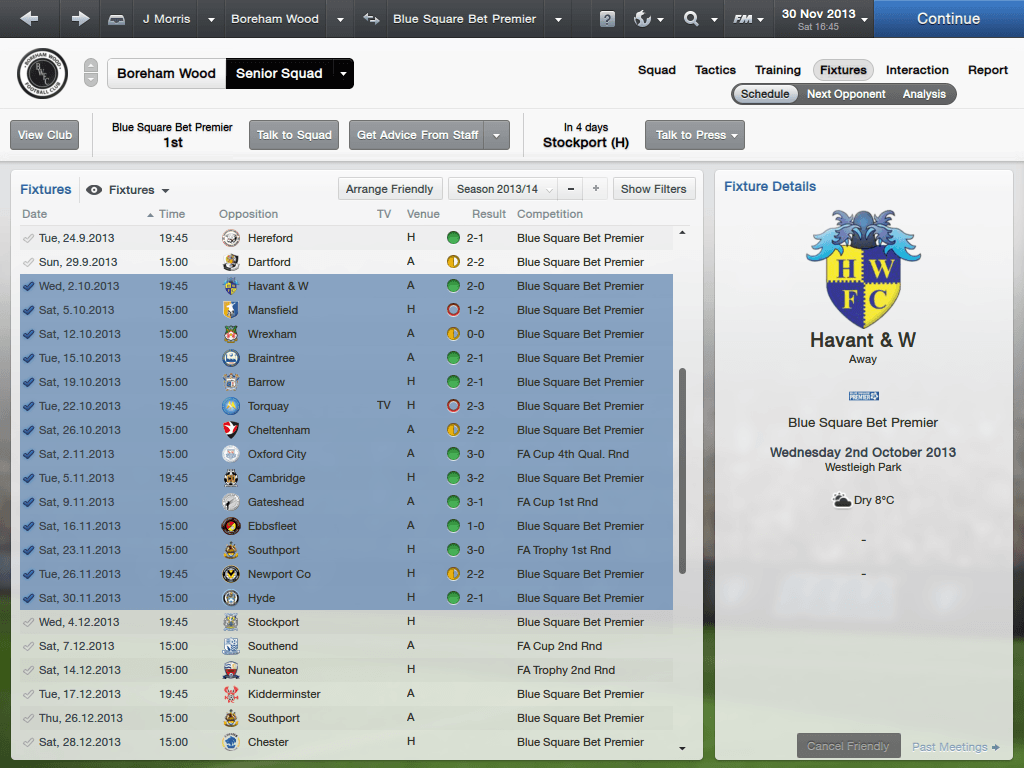 The two months were really different from each other. In October we won only 3 games, 2 draws and 2 loses. The oppositions were tough (Tourquay, Mansfield, Wrexham) and we didn't impress much. But then November came and aside from one draw, it was full of wins.

The team clearly starting to get better, and the most impressing player at the moment is Olly Taylor. I loaned the young (19) English striker in to have a decent sub for Omer Riza and Cliff Akurang. The guy really impressed and he got another chance, and another. So far he have 12 appreances, 7 goals and 6 assists. I hope he can continue this amazing run of form.

Here is the league table at the moment: 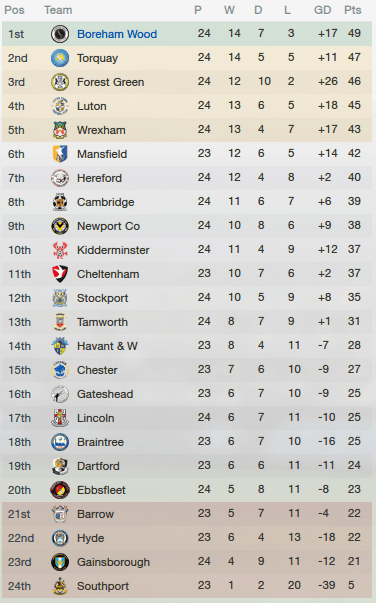 No team is really dominating at the moment, and the league is very balanced. Yet, we are holding the 1st place and want to keep there until the end.

tango602
9 years
Looking good so far, keep it up and we will soon be seeing you promoted again

Michael
9 years
1st, but that gap should have been 5

Losing against to no.2

MarkKolatowicz
9 years
to be honest im not even surprised your doin so well in the bsp, i jus think your a top quality manager, so i have no doubts you will gain back 2 back promotions ;D awesome stuff Or
Login to Quote

andrew98
9 years
Nice results, 1st in the league in the half of the season. YOU CAN DO IT ORRRR!!
Login to Quote

The titles for the end of the season report are being scripted already! 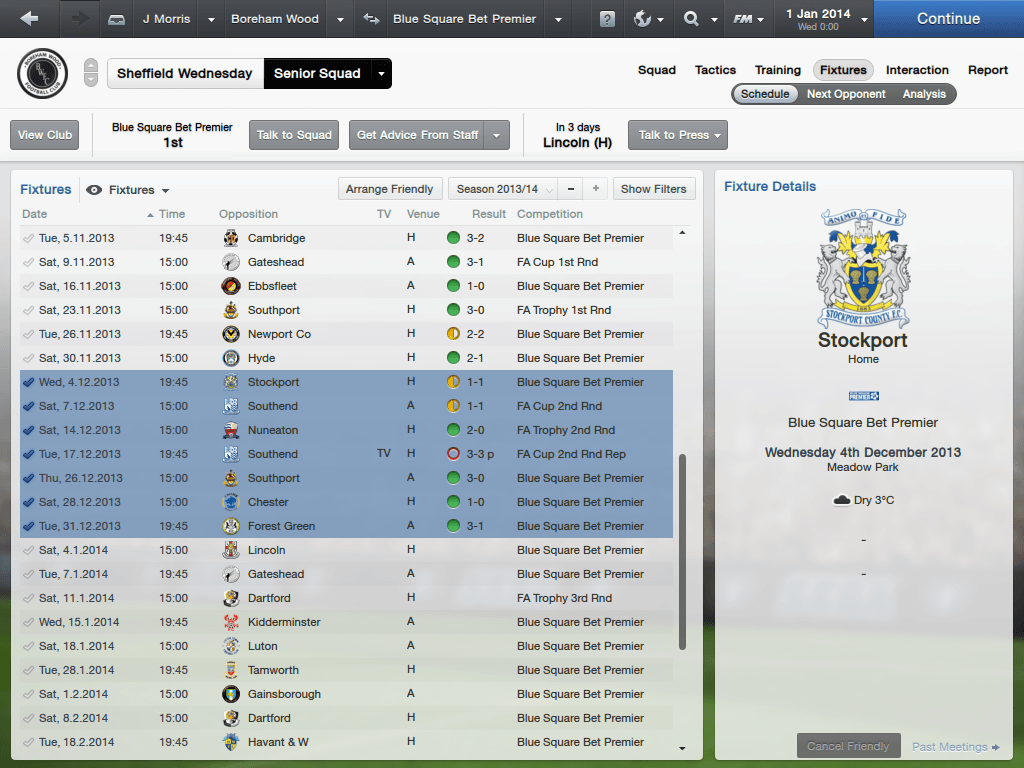 FA Cup: We got Southend which was impossible to overcome, but we did manage to draw them and lose only by penalties. So overall, I was happy.

FA Trophy: This season we are in it to win it! Got easily past Nuneaton, in order to proceed.

BSP: Started with a poor 1-1 draw, but superb result against Forest Green gave us an advantage in the 1st place. 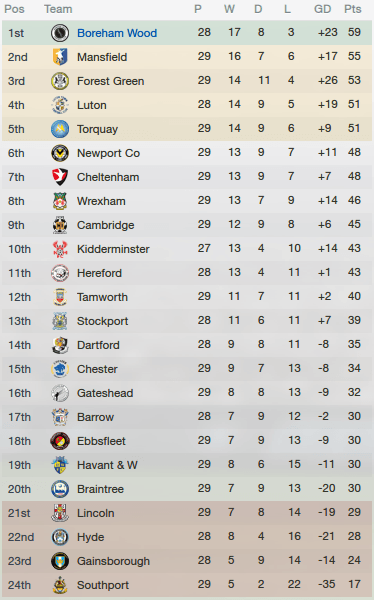 We are proudly end 2013 in the first place, and we want to keep the momentum going with more awesome results. May 2014 will be as good.

MarkKolatowicz
9 years
awesome, just awesome.. cant think of another word lol , keep it up, be in the prem in no time ;D
Login to Quote

FOSEBALL
9 years
Come on the Wood promo all the way..
Login to Quote

MattBerry96
9 years
never followed a story as close as this... dying for more! come on hahah


Only 4 months left in the season, and The Wood are confident to keep the good run of form going. Also, they have a chance to be a major force in the FA Trophy this year. 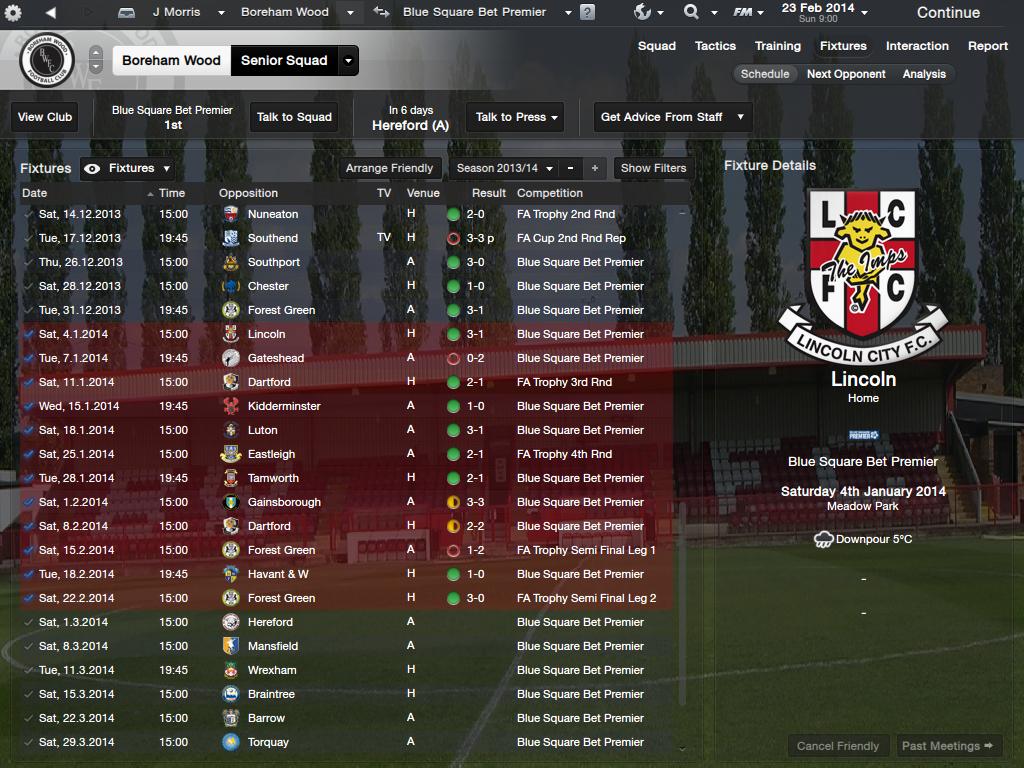 Except an awful 2-0 lose, January was perfect. We took almost all the points we could in the Blue Square Premier, and progressed easily through the FA Trophy 3rd and 4th round.

But February started bad with two draws in the league, just before our upcoming FA Trophy Semi-Finals. In the Semis we had Forest Green who are 2nd in the BSP and playing amazingly up to this point. The first leg was away and we lost 2-1. But then I took the team for a talk, and we managed to barely win our next league game.

After that we faced Forest Green at home and rounded up an amazing 3-0 win. We smashed Green and marched on to the final! 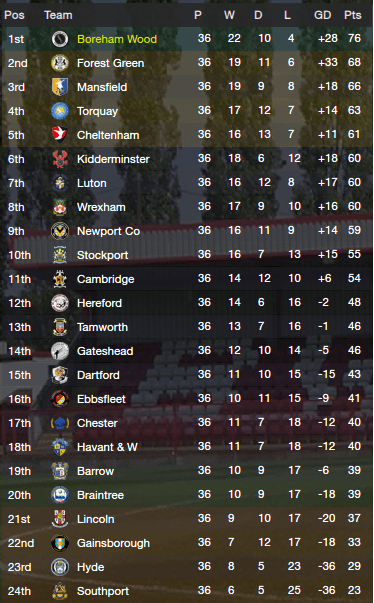 Just two more months to go, and we can't wait to get to the npower League 2 and maybe even win the FA Trophy!

The FM Rookie
9 years
Nearly there! The Football League is in the horizon!